For smaller-room performance, I moved the show upstairs. Now a Soundaware D100Pro as SD card reader fed AES/EBU to CanEver's ZeroUno DAC-HPA. That drove an Austrian Crayon Audio CFA-1.2 as power amplifier. As I put it in my review of the CanEver comparing it to our COS Engineering D1, "with ribbon tweeters weighing just 1/100th of a gram, I employed treble excavators sans pareil. My attention felt like an expert grave robber who could track the lingering ghosts of the long dead. As expected, the COS converted this into an airier read of more exposed decay trails and venue halos around the performers. Switching to CanEver lowered the center of gravity into a meatier midband. It also widened dynamic range and, in direct opposition to the D1, changed its aerated pseudo dither embedded in the soundstage into a more damped presentation which felt even quieter because the same 'dither' was absent. This I laid at the feet of CanEver's transformer coupling." 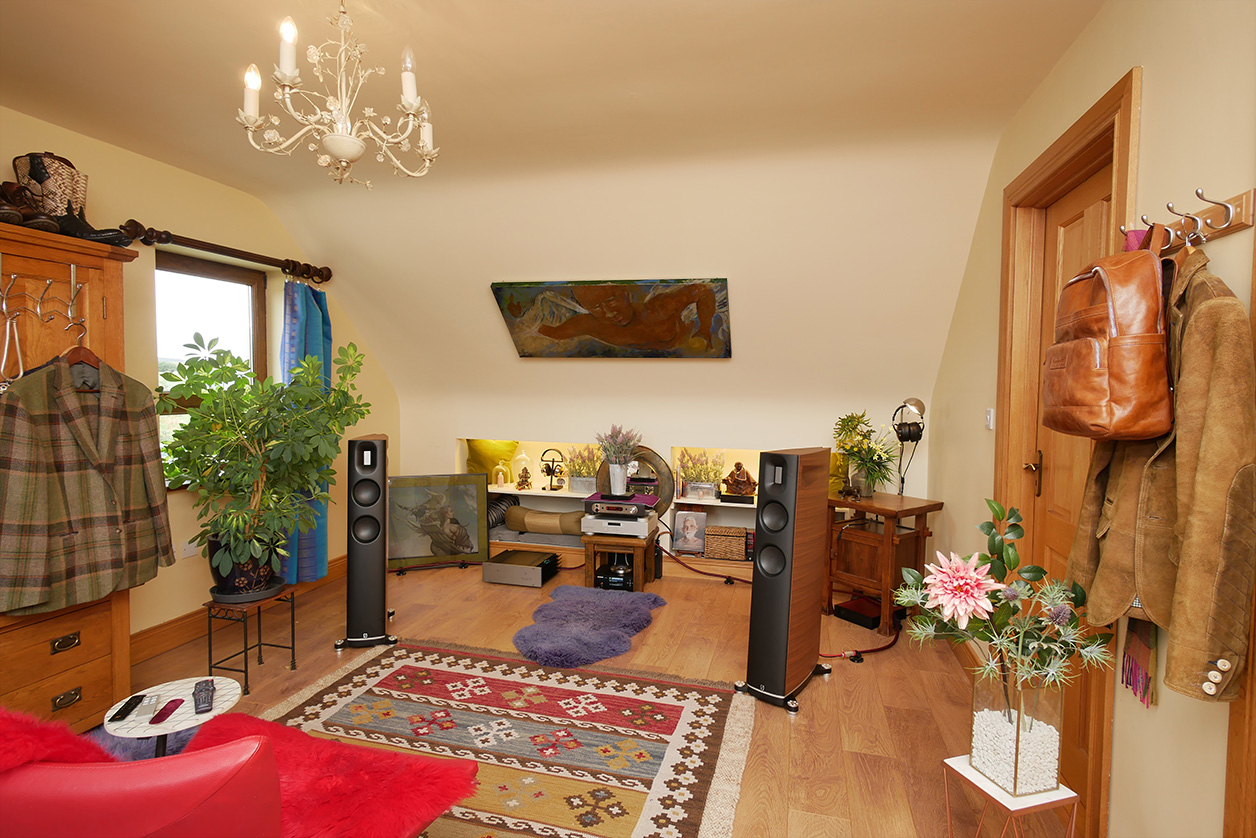 "If we assign gloss values to tone textures as we would with paint skins, the D1 was shinier and more reflective, the HPA drier and more satin. With the Danish transducers groomed for top speed, CanEver's gains really magnified just how high microdynamic ripples registered for more emphatic artistic inflections. Thinking about probable cause, I would point at Mario Canever's overbuilt power supplies of six toroids versus two in the COS. Lastly, the coordinates of the D1 emphasized soundstage depth whilst the HPA feathered things out wider."

From this parallel review, we can extricate a few important things about the Børresen 02. First, it proved perfectly matched to our secondary ~4x6m space and its 90wpc wide-bandwidth class A/B amp with current feedback and switching power supply. In line with the lower volumes one uses in smaller spaces, the most exciting qualities of the 02 were its microdynamic alertness and pass-thru transparency. As I wrote about them in the CanEver review, "microdynamics were trigger happy. That caused more difference of emphasis across melodic arcs, between rhythmic beats. In my book, these two qualities—higher dynamic contrast, more finely hued tone colors—are a must if one enjoys listening at lower levels. It's then that things naturally tend to flatten out and get paler. The keener a system is at keeping its finger on the dying pulse of low-level dynamic flickers, the more it grips our interest. The longer it can maintain color density, the less we suffer the effects of intruding whitishness as though winter were coming." 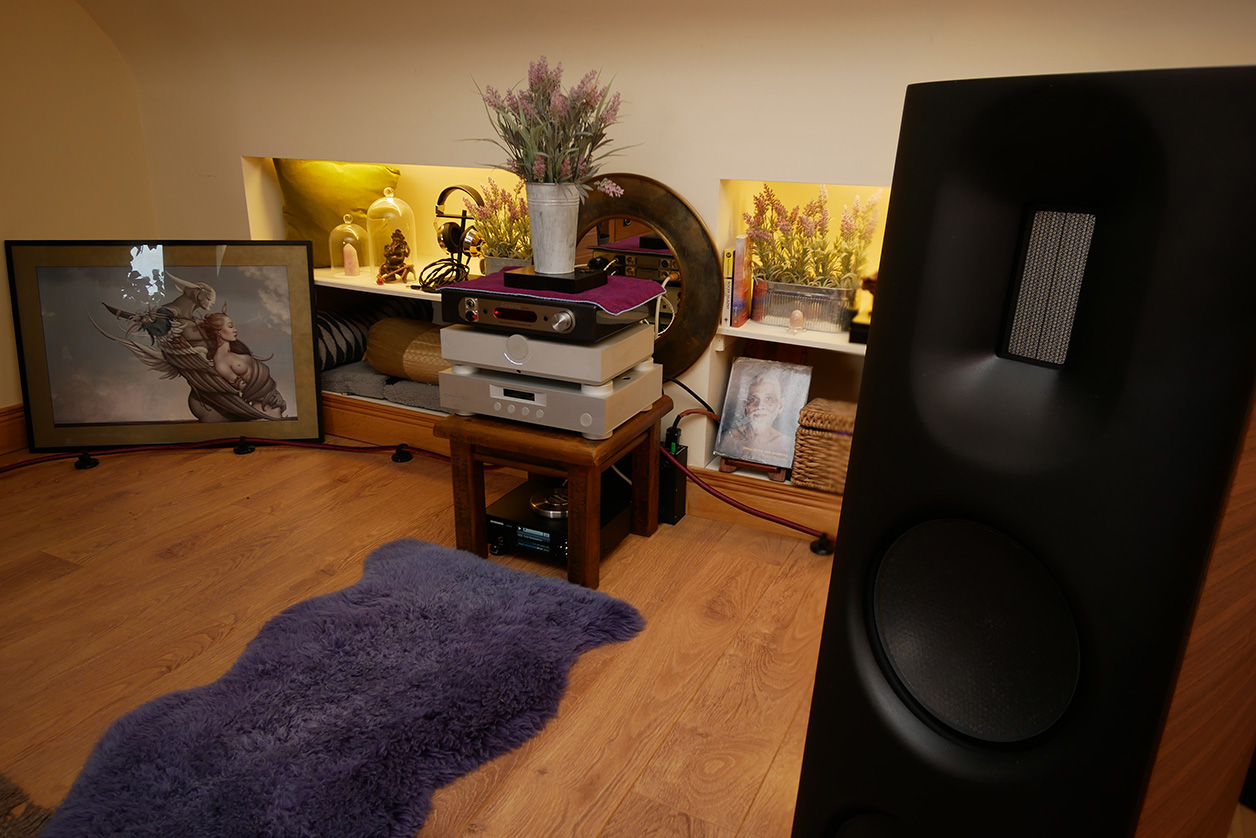 What is transparency if not to relay a message without embellishments? The obvious flip side is that the message may already contain all the embellishments one fancies. With speakers this quick and neutral, even small alterations in the preceding hardware get maximally exposed. Now very little upstream seasoning will go a long way. That's exactly what I explored between these two different DAC/pre. Because these speakers don't diminish already narrower differences to require far bigger doses to begin with, such seasoning becomes very predictable and strategic. It's like hearing differences between digital filters over headphones but not your usual speakers. What happened? Your speakers weren't sufficiently resolved.  With the Børresen 02, you won't have that problem. If it's there, you'll hear it no matter how small. If your preceding hardware is lean, bright and cold, that's what you'll hear. If you inject your personal X factor—our Elrog ER50 downstairs, the CanEver DAC upstairs—that's what you'll hear.

My last stop on the domestic Børresen tour was our simple 2-channel video system. It revolves around an Oppo universal player, Wyred4Sound STP-SE II preamp and Goldmund/Job 225 power amp. The 02 stood where the usual German Physik HRS-120 had. i.e. parallel to the Sony television, backs inches from the front wall. This was the deliberate opposite of any maximally wide, steeply toed-in routine in open space such as Børresen exploit at shows whenever possible or in their own demo system. The obvious consequence was reduced stage depth just as happens to any loudspeaker under such constrained conditions. Some suffer less than others. But that's only because they were never capable of throwing a truly cavernous soundstage in the first place. The Danes are. So you would really know this difference had you opportunity to compare a tight wall-hugging setup to one in more free space. 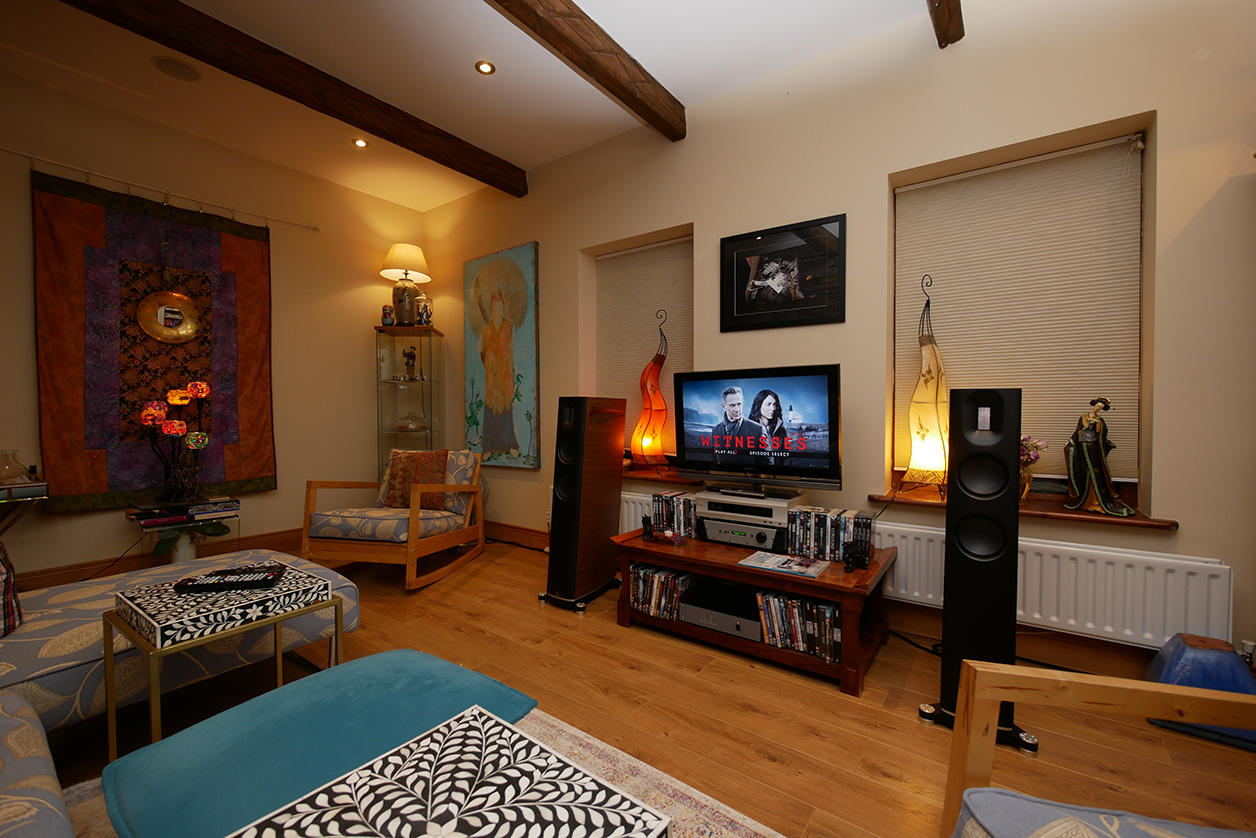 If you didn't, all you'd notice even from such modest electronics is the unusual detail density and enhanced dynamic contrast. It makes the most of carefully mixed location ambiance. It triggers higher-than-common startle factor with slamming car doors, shattering glass, cracking branches, piercing wails of ambulances, gun fire and all the other location noises of cop shows, never mind human dialogue and the intelligibility of thick accents or poor enunciation. Even without any experience of live concerts or bar gigs, everyone knows what those noises sound like, hopefully gun shots excepted. Anyone can tell whether dialogue comprehension improves or worsens when swapping out speakers. Given the preceding pages, I needn't spell out how the 02's extreme resolution benefited all of it. What does bear mention is that we suffered no bass issues from this setup to confirm than Michael's port execution is rather less critical than text-book ports. The primary bonus for our mostly story not action-driven video consumption was the ability to use lower volumes without feeling that the sense of location ambiance collapsed or that dialogue became harder to follow.

Conclusion. There's no getting around it so this is the place to get it ticked off. As reviewed, this compact svelte speaker with the 4.7" mid/woofers costs more than a 3-way Wilson Audio Sasha DAW in automotive lacquer over ultra-hard composite, with paralleled dedicated 8" woofers for lower louder bass though also a far tougher 2.48Ω minimum impedance. Whilst I cannot see anyone complain legitimately about the 02's looks, build, tech or performance, I do imagine hordes of folks complain over its ultra-high sticker. But given the Nordost/Raidho precedent, for this team that's nothing new. It's just business as usual though it does include the forthcoming Z range which will trickle the love downward.

Where most other new brands must claw their way up the high-end food chain tooth and nail, the combined CV of Lars Kristensen and Michael Børresen meant pre-existing industry connections carefully cultivated over decades, winning reputations and very serious experience in the business. This enabled them to enter the market at the very top. From day one, they get to challenge established stalwarts like Magico, Rockport and Wilson. You'd say "welcome to the jungle" if they weren't veterans who've already been there and done that. What does one say then?

Given how they left Raidho and Nordost to launch their own brands Børresen and Ansuz… how about a most cheery welcome back?

Postscript. With a complete Ansuz power-line system then the new Aavik U-380 already scheduled for their own feature reviews, the assignment of the integrated amplifier will include the lot. Very deliberately, this will recreate a nearly complete Aalborg rig in Ireland. When the time comes, you'll thus be able to read how the Børresen 02 performed with a little (or lot of?) help from its house friends.