Behind the mid/woofers sit perforated HDF discs to "create a pressure environment bigger behind the driver than in the cabinet. Now two drivers sharing the same port don't see each other. This keeps bass rumble out of the midrange. At low SPL, the driver doesn't see the cabinet at all. At higher SPL, the cabinet seems to get a bit smaller which improves control and power handling whilst the behavior of the ported alignment shifts to more of a sealed box. The speaker will play really loud yet its small drivers are protected." 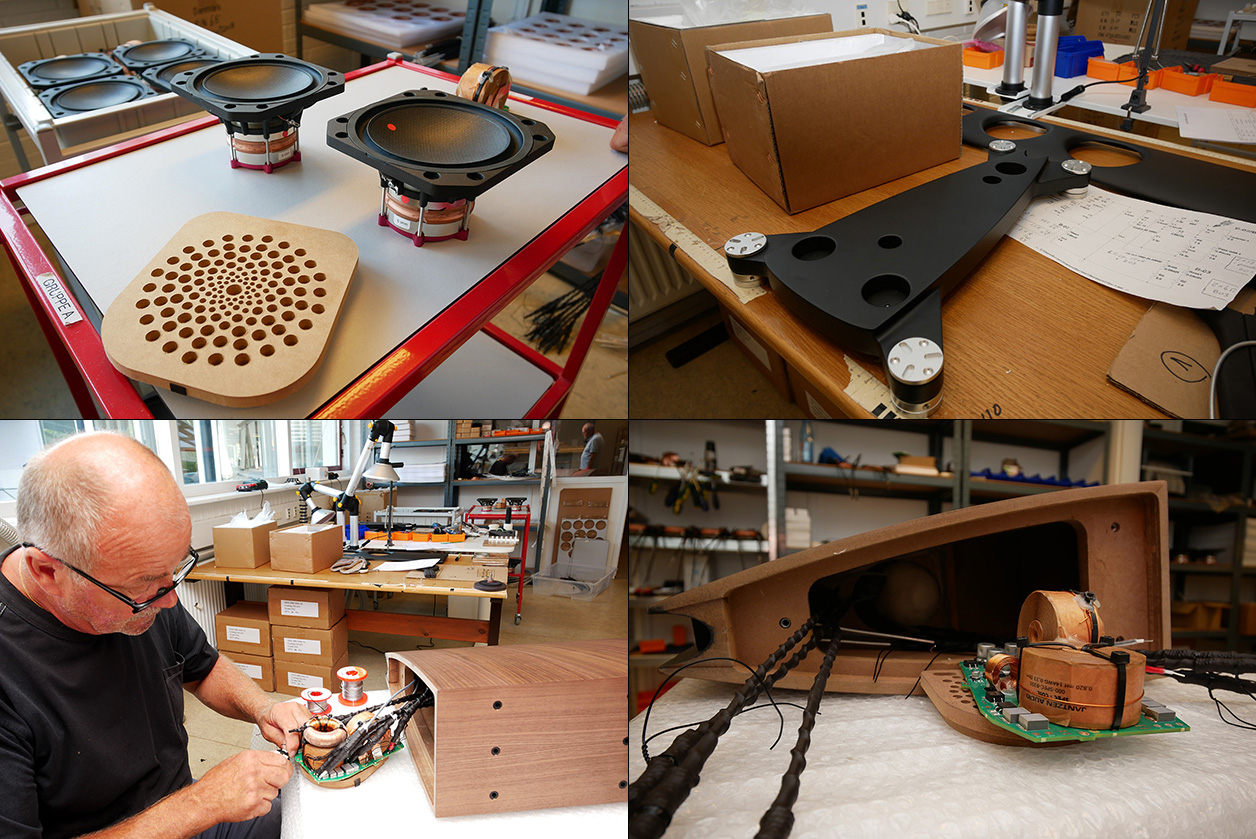 As the unattached plinth shows, each speaker is mechanically grounded through three Darkz resonance-control footers (not shown) which occupy the circular chambers to remain concealed on the inside of the plinth. Additional units may be fitted underneath the external footers.

The crossover isn't a common parallel but series type as invented by Bang & Olufsen in the 1970s. 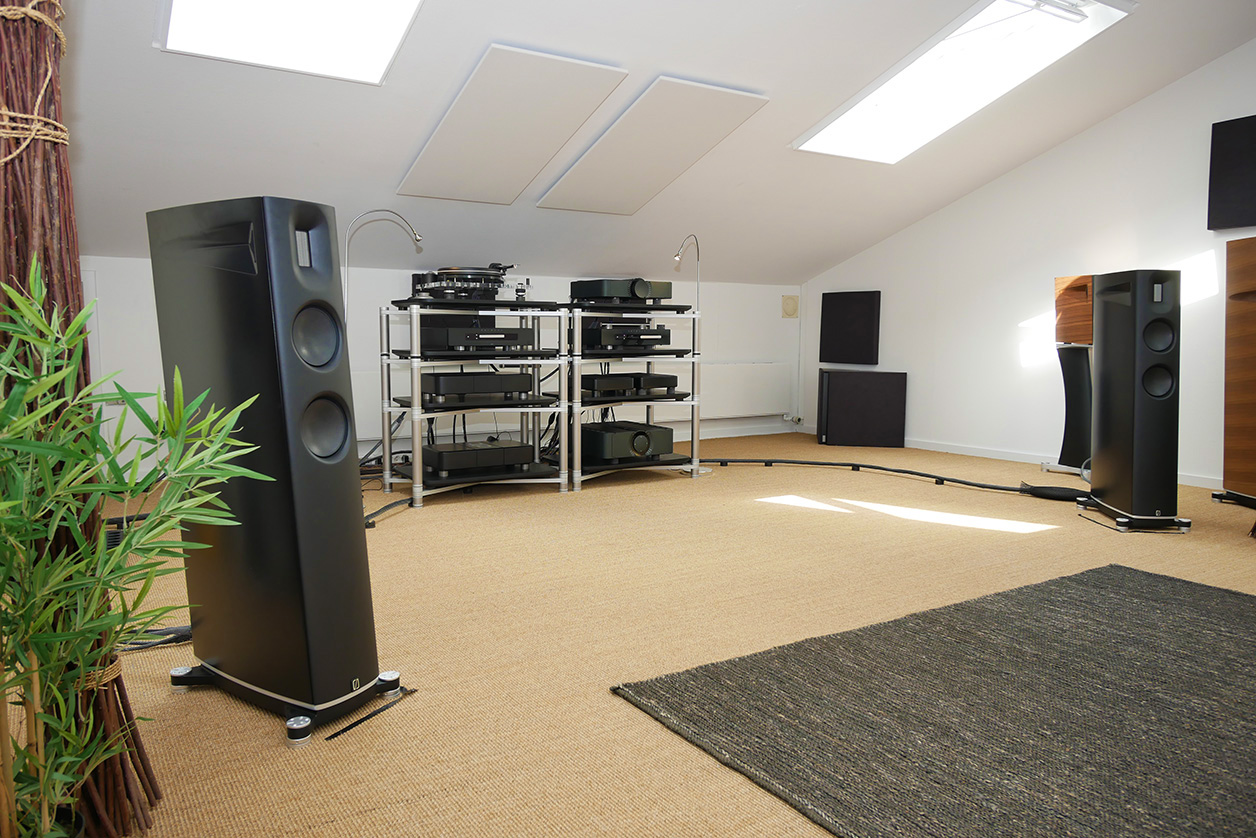 "This type maintains phase coherence across the crossover region since it doesn't treat its two drivers as separate. If for example the heavier cone's motion creates its own current, it will reflect into the tweeter to sound/behave like the dynamic driver at all SPL and through steep transients. Now the speaker stays fully awake at low listening levels and doesn't collapse at high SPL. The drawback of a series filter is simply twice the component cost as that of a parallel equivalent."

As to why he prefers 2.5 over 3-ways, "each filter introduces phase shift and it's very difficult to maintain energy into the bass through any phase shift. Avoiding one of the electrical filters of a 3-way—the high-pass on the midrange—and using a mechanical filter instead, our speaker improves its ability to carry energy down into the low frequencies. Now the bass doesn't detach from the midrange." 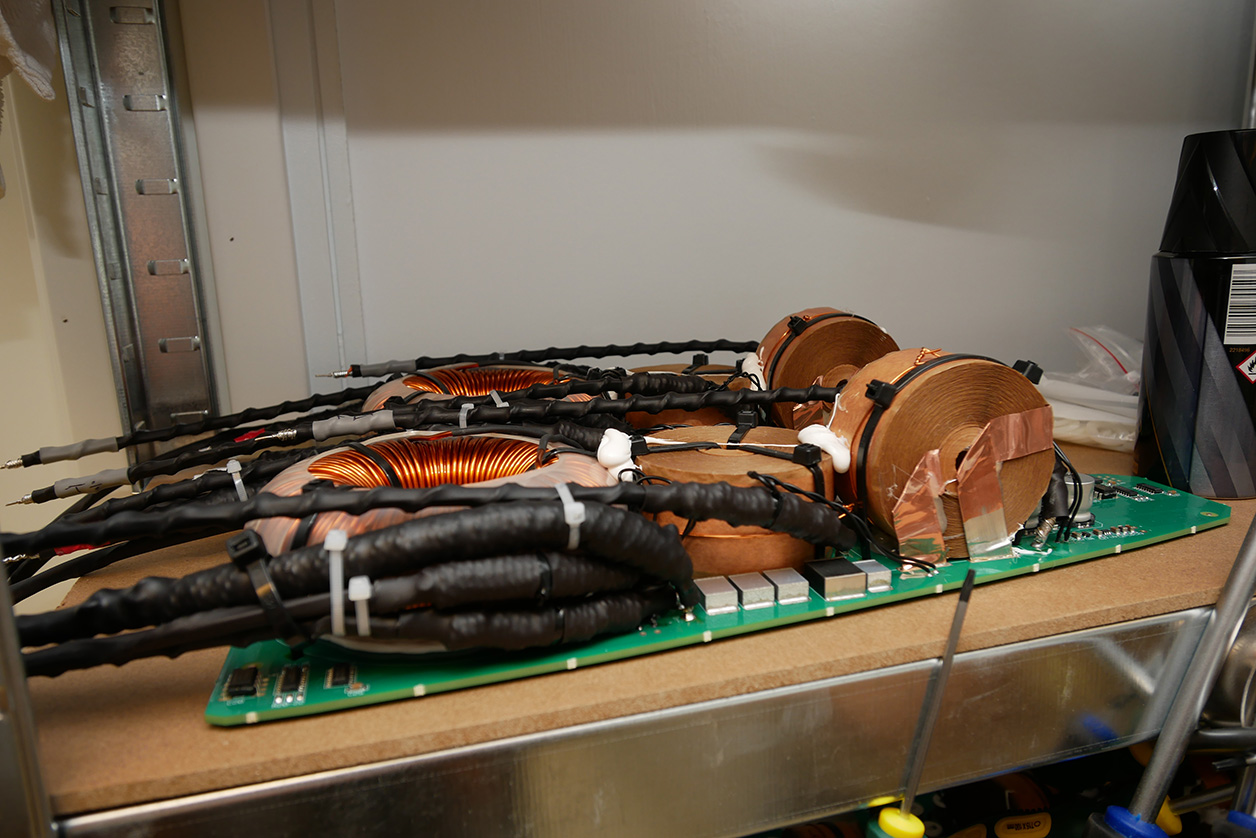 Based on an approach borrowed from marine sonar, Michael has developed what he calls dither tech to modulate the noise floor. "At low frequencies, it injects random residuals of squares into the signal." These frequencies include the Schuman resonance and its harmonics like 55, 110 and 220Hz. These scalar fields combat the antenna effects of cables and are thus incorporated into the Børresen filter networks. 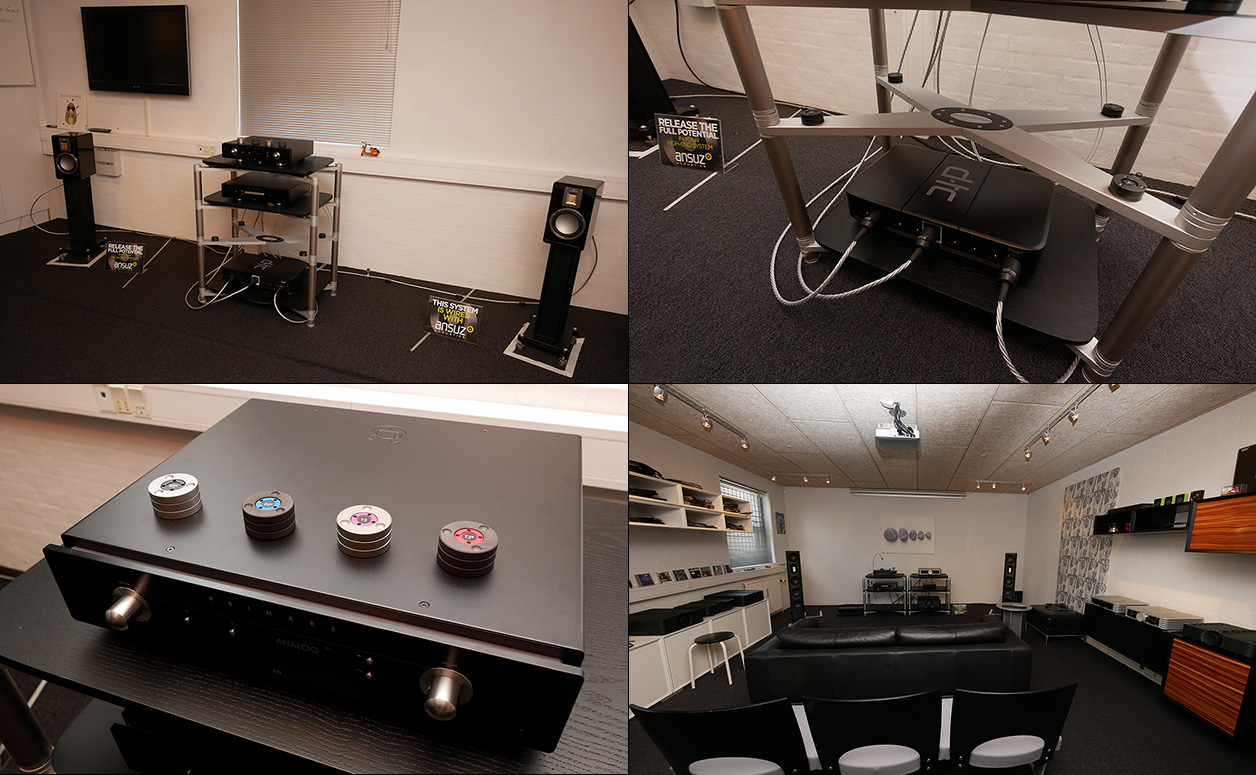 Placed left to right in sequence of increasing cost and hardness, the four grades of Darkz mechanical grounding devices atop a Primare integrated in the company's Aarhus demo facility.

In an argon atmosphere, sand-blasted aluminium parts are bombarded by tantalum and carbon to acquire a micron-thick final surface layer of diamond. The titanium parts are equally surface-coated with interlocking layers of tantalum, scandium and diamond. They shift resonance modes to increase the transmission effectiveness of micro vibrations by increasing the hardness of the ball-bearing interfaces. Capacitors charging and discharging vibrate, circuit boards and transformers do. Evacuating such mechanical noise improves signal clarity. 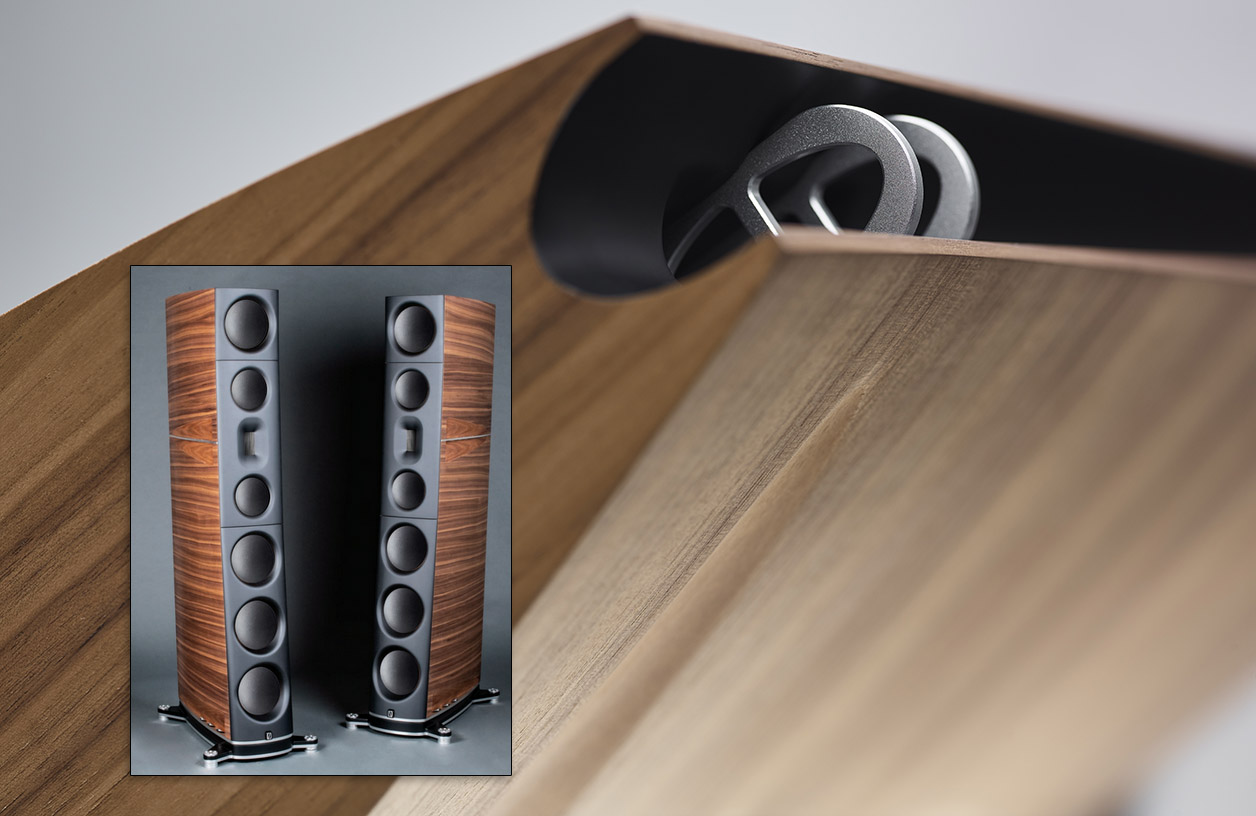 One of the Model 02's anti-turbulence vents with integral diffusors. In insert, Model 05 with 4 x paralleled woofers as the 0.5 coverage of its 2.5-way array. 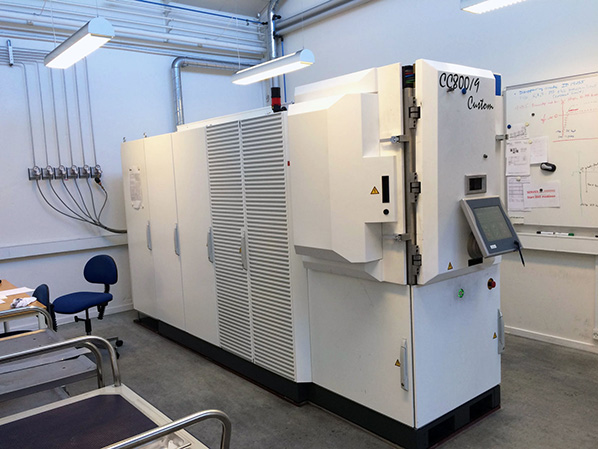 "The vanes across the ports create small higher-pitched airflow vortexes, not one big noisy turbulence at the mouth of the port. Airflow turbulence noise is a huge problem for ventilated speaker designs. These vanes along with the semi-soft lining of polyurethane foam inside the port effectively combat the dreaded port noise."

Aarhus particle accelerator at right. Each time the science team at Aarhus university come across a new alloy or surface treatment which they think could be of interest for hifi, Ansuz learn about it. Now they visit the university's Physics department to get a pair of plain Dartz footers treated with the new process. Subsequent listening determines whether it's superior to what they already have or not.

As Lars explained, "in firms where I worked earlier, there often was reluctance to adopt new tech right away. They preferred to hold it back or release it only in trickles. When we find better solutions at Ansuz, Aavik or Børresen, we prefer to share them with our customers as soon as possible; and we endeavor to apply them across all our product ranges wherever feasible."

Being Danish, their industrial design and fit'n'finish is top notch as well.

Being undeniably hi-tech with custom-made materials and processes obviously comes at a price. But if civilians like us want to hit the race track, we best bring that BMW M4 which Lars Kristensen drives – an inline six-cylinder twin-turbo engine with interleaved 8-gear automatic transmission which shifts faster than we could manually. Forget economy mode. There isn't one. Likewise for these Børresen speakers. They're unapologetically meant for the race track. It's about pushing the performance envelope with all the unfair advantages at one's disposal.

It recalls the Bavarians' old slogan of "BMW – the ultimate driving machine." It's about speed with full control and the exhilarating experience of being an active driver. By now you must wonder. What does going to these Danish hifi races sound and feel like?

These renders show how the cabinet internals are just as complex as is the outside geometry. Note the perforated pressure-control discs behind the mid/woofers.