Responding to the Danish setup with its demand for my undivided attention was that kind of trippy. You could have tapped your feet but already that would have been a distraction to leak attention. Sitting perfectly still, eyes closed and mind empty, had me more fully appreciate just how dimensionally descriptive and micro-dynamically emphatic the Aalborg system played. Now I'd have to learn how our domestic setup would shift emphasis or change core qualities. I'd encountered a best-case scenario in Denmark. Anything less wouldn't be the Børresen 02's fault. It'd be personal ineptitude at setup or owning ancillaries of insufficient pedigree. In that sense, hosting my on-site demo had been Lars Kristensen's insurance policy. He'd presented the full potential of their product. Now it was up to me to tap it. If I didn't, I'd know.

Going in, I suspected that our gear—Denafrips discrete R2R Terminator DAC, LinnenberG Liszt 1MHz lateral Mosfet mono amps and particularly Vinnie Rossi's L2 Signature Preamplifier with Elrog ER50 or Western Electric VT52 direct-heated triodes—wouldn't equally emphasize the ripped dynamic angular elements of music; nor do it with such ultra-chiseled staging exactitude. Instead of incisive propulsion laying bare complex music's subcutaneous structures, I expected more emphasis on harmonic nuance, tonal hues and temporal flow. That's because having heard a few of my own tracks in Denmark—.flac on SD card which Emil Kristensen had to rip to CDR to accommodate their Primare transport—I'd noticed how they sounded different from at home. It's like dim sum and then some. Your waiter placed the dishes on a rotating platter for your table. Until you eat them, their numbers won't change. But with the platter turning for inspection, what's nearest to and farthest from you does. Now your overall perspective shifts. That's not about less or more, just difference. My own table was all set now. I'd read the menu. I'd talked with the chef. I'd inspected his kitchen. I'd understood the providence of the ingredients and the culinary goals behind the establishment. Then why place a loaner order for a Børresen 02, you ask? Because of its grander scale and ease over the monitor. Our room is 10m deep. Why not scale up to the 03? Because its weight and size made me unsure whether I could unpack and especially rebox it solo without causing damage to its finish. For raw manhandling and our room's size, the 02 felt just right. Call it intuition and 20 years of experience.

For those barred from entry into the Børresen club due to too exclusive a price, the 2019 Denver show premiered an early Z-01 monitor whose raw cabinet I'd spied during my visit. It's based on the same ribbon tweeter but a different mid/woofer with iron all in a simpler rectangular cabinet with rear vent not side channels for the tweeter [see below]. The Børresen Z range should become to their main range what ScanSonic is to Raidho – core DNA and in-house tech trickled down to lower price points with simpler enclosures.

When commercial manager Ann Purkær Plaetner's 'shipped' email arrived, I saw my loaners identified as DTC. That meant Darkz T2 Supreme resonance control aboard, i.e. a €4'200 surcharge over the stock model fitted with C2t couplers. That's a royal difference sum for six invisible footers. However, remember how each of these Titanium triple discs with ball bearings was treated in the Aarhus particle accelerator to grow thin skins of interlocked tantalum, scandium and diamond. 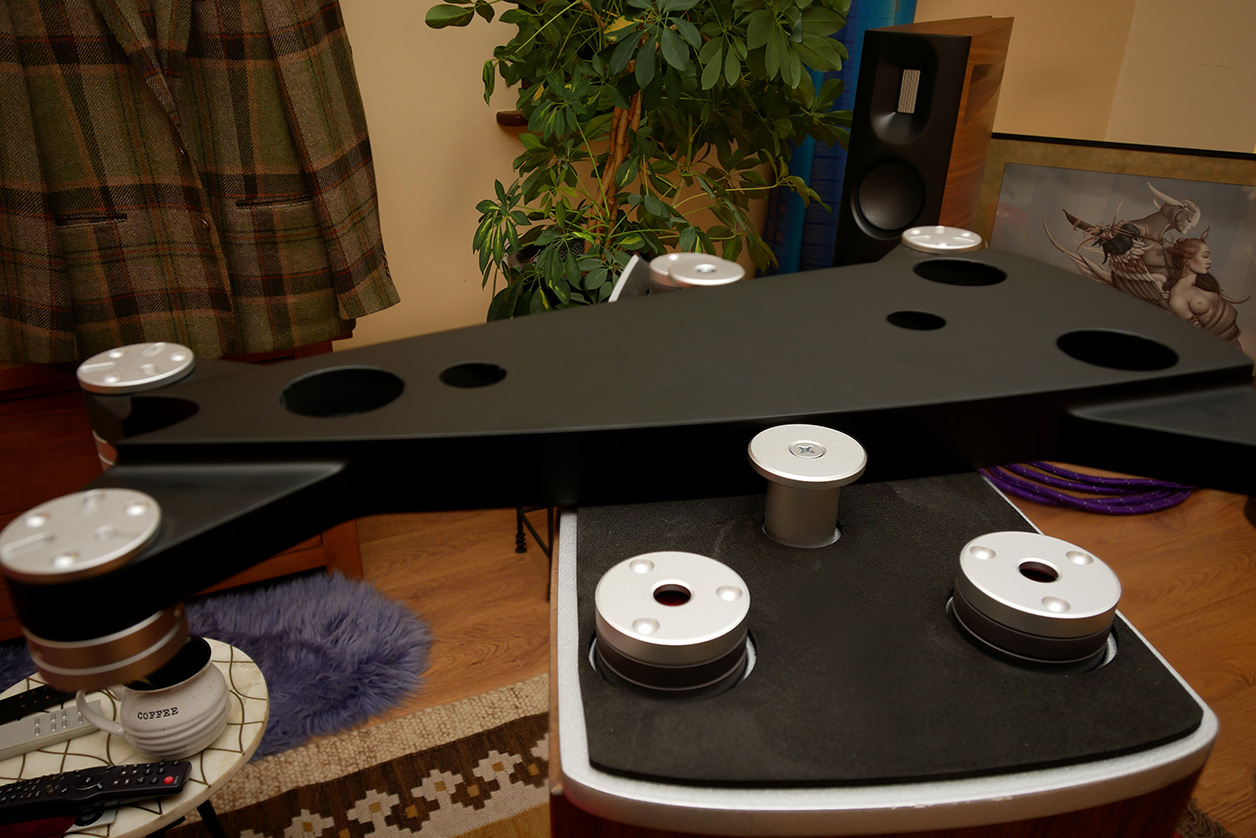 Just mentioning it, one could be accused of having grown very thick skin to such fiscal excess. Yet there's no denying that this tech is time-consuming and exotic. Worse for me? During my Denmark factory visit, Frits Damose had played footsies with my ears. I couldn't deny that working our way up through their four Darkz tiers was audibly demonstrable already in a budget system with Primare and Audio Vector electronics and monitors.

Don't buy the costliest couplers if you can't hear the difference; don't complain that they cost what they do if you can but still can't afford them. Upgrading at a later time just requires unbolting the plinths, then exchanging six no longer captive Darkz for new ones. Trade in the old ones with your Ansuz dealer for credits; or use them now underneath the plinths to go full hog. 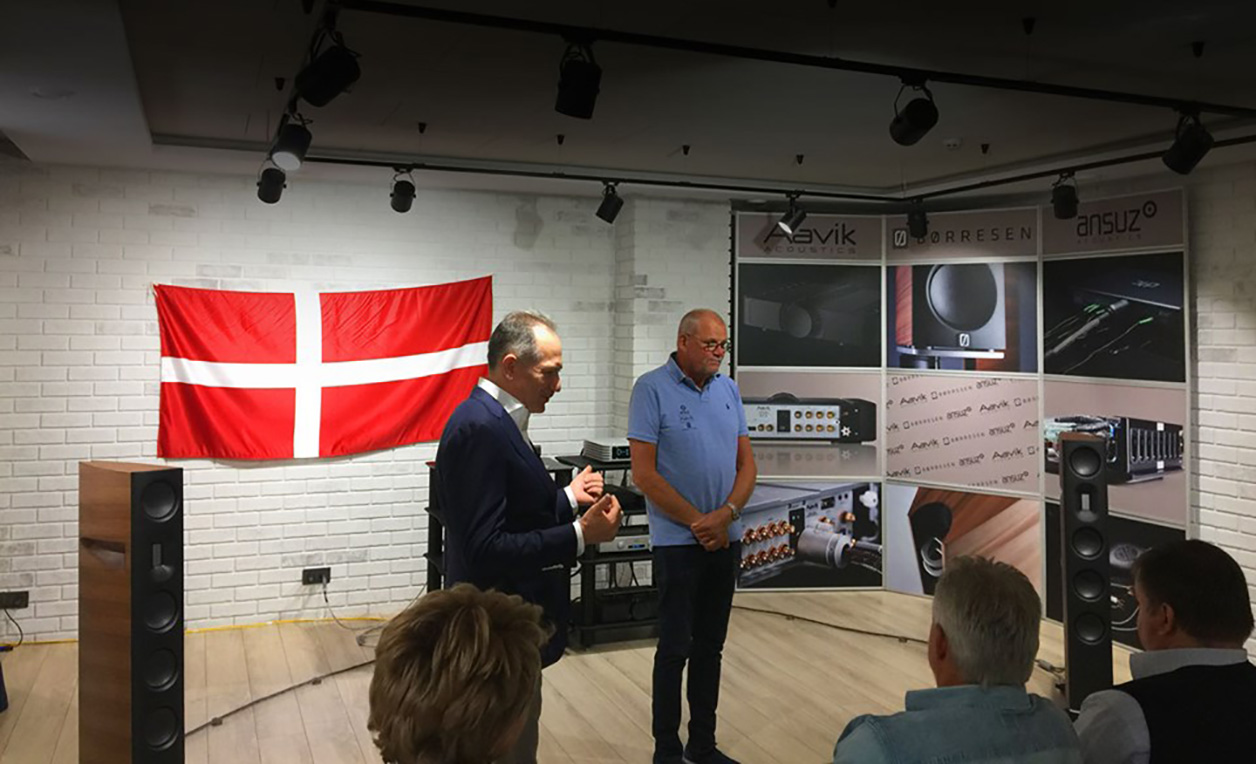