To eliminate riding a familiar room mode to unusual excess—more linear impedance equaled greater output there!—I had to move my listening position a good chair's depth toward the front wall onto the rug. Next I moved the speakers back by a good foot and outward by not quite one. Now their vents faced the sidewalls at close proximity, thus away from the front corners. The even wider far closer sitting position created an immersive 'half surround' perspective like a giant pair of headphones but out of the head. 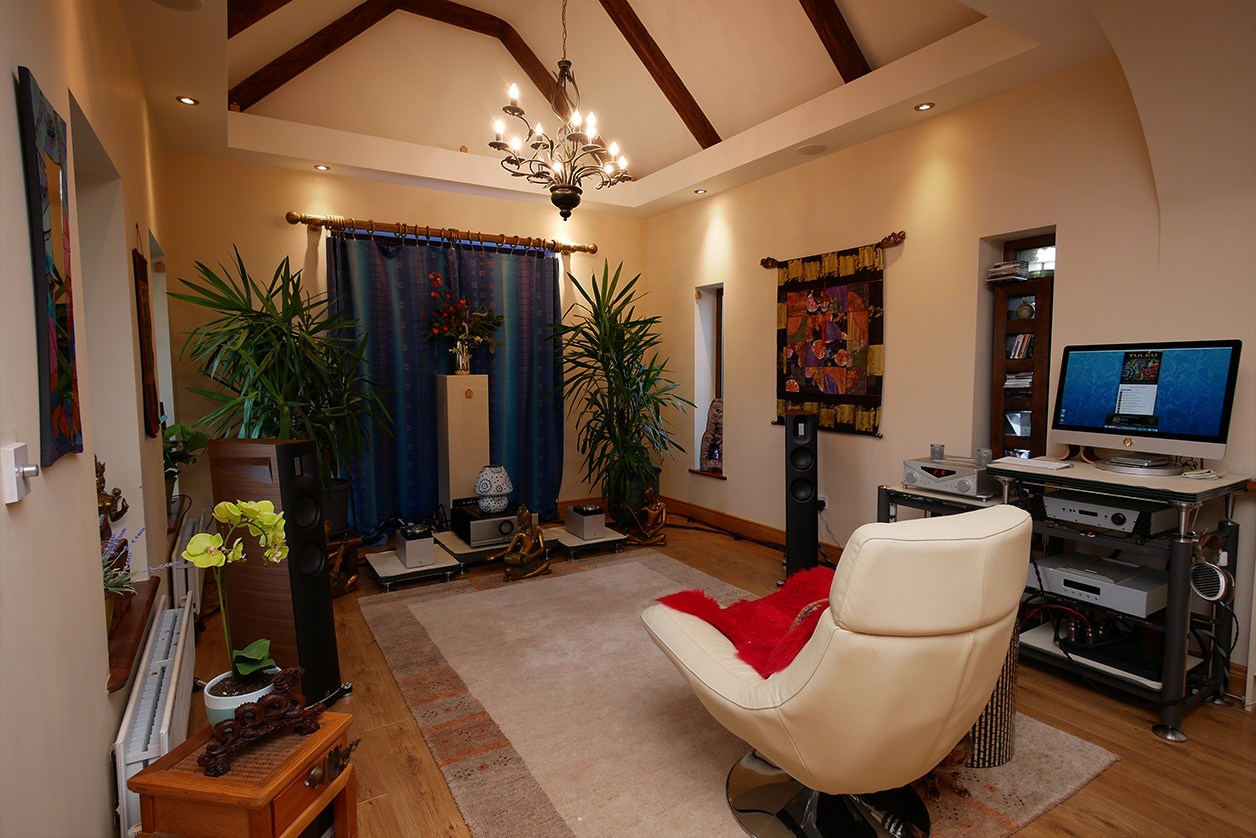 With the primary room peak flattened, I could indulge in some heavy-attack bass tracks at happy-hour SPL like this Mercan Dede "Huo" number from the Nefes|Breath album…

… or "Ayahuasca Healing", a psychotropic Amazon ceremony as imagined by the Tulku formation on their A Universe to come album. I played both at seriously stout levels. Just as they had in Denmark, the 02 proved entirely unfazed. They dished out super clean very powerful small-woofer'd bass. By that I mean an emphasis on clear pitch definition, articulation and zero interference with, hence clean separation from, the midband. Raw air motion with guttural impact on the skin would be reserved for the bigger models. The thing the 02 thus couldn't do was pressurize the room with the embedded infrasonics for that slightly ominous felt-never-seen sense of space. The 02's take on spaciousness was extremely visual, impeccably sorted and unconditionally stable even when music grew big and boisterous like break-dancing elephants on magic mushrooms.

It just didn't have that more primal quality afforded by true sub bass which the Codex can retrieve; or which our man-tall Zu subwoofer could add. That's the price to pay for the lightning-quick exceptional  ribbon tweeter which needs a small mid/woofer of similar speed to keep up; and which Michael didn't want to confuse with a 3-way crossover. That only left the option of paralleling the mid/woofer. It was a conscious very deliberate decision to prioritize speed and precision over ultimate LF extension and shove. Once you hear such sterling speed in action, you'll likely agree that these design choices are very well played indeed. If not, go after the next model up; or the one beyond it. For just why the Børresen ribbon is so spectacular, consider this track from Aytac Dogan's beautiful Deva album.

There is a lot of very fine stick work from the percussionist here which thin-film headphones dig into deeply but which, in free air over loudspeakers, tends to fade particularly at playback levels sufficiently low to move those subtle ticks and trills below our hearing threshold. Here this ribbon tweeter set a new low for how quietly it allowed me to play this track and still make out this percussive spiderweb play. The Turkish lap harp called qanun which headlines also benefited from the speaker's overall mastery over timing. After percussion, hard-plucked strings are the best magnifiers for how instant and unfettered leading edges rise.

Intermission. Thinking back on prior occasions where I'd met sonic excellence at this level, I could only recall Æquo Audio's Stilla and Ensis models. Those Dutchies went about their bass the active albeit purist analog way to require no conversion of analog input signal to digital for DSP chicanes. Which segues into my point. In the fully active domain, speakers like the Kii Three, Dutch & Dutch 8c and Grimm LS1be, all reviewed in these pages, breach this performance league at significantly lower coin. To arrive here by purely passive means does, let's call this out loud, demand disproportionately more. Active drive is smarter and more advanced, period. Alas, traditional audiophiles on a whole dislike the breed. That wipes out the argument like a plague. Be thy gone, horned one! This being so, we'll hastily depart our brief pit stop at cold hard monetary reason to rejoin the passion-driven raceway of 'purist' passive speakers which are expected to perform like premium actives. Hello, intended takeaway. If driven by appropriate electronics, the tech behind and inside the Børresen 02 lets them perform with the speed, control, exactitude and precision of today's very best actives. In a saner imaginary world, this would be a back-handed compliment indeed. In our audiophile actual reality, it's the exact opposite: genuine very relevant praise! 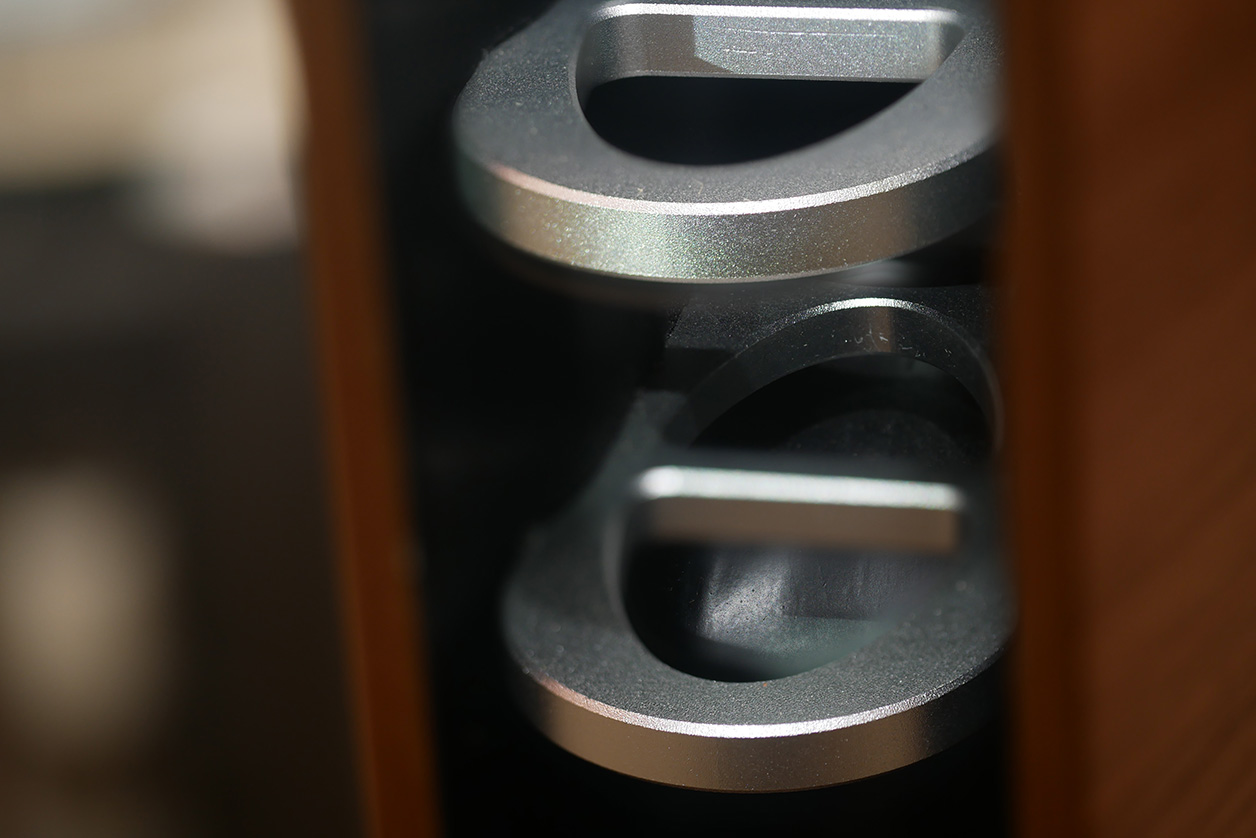 Where actives might strike us as a bit dry or mechanical—call it the mastering-console aesthetic and/or high-feedback class D with beaucoup DSP—you steer the sonics of today's passives. That freedom of choice is the main reason why high-enders shun actives. With them, someone else decided on your behalf. The Børresen 02 were so transparent and lucid that the contributions of our direct-coupled ER50 triodes and ultra-bandwidth lateral Exicon Mosfets manifested to maximum effect. It took zero alterations to arrive at 'our' sound. On electrifying directness, it in fact was equal to our Cube Audio Nenuphar single-driver widebanders. On treble finesse and purity, the Danes trumped all and everything in house. Likewise for resolution. Whilst their sticker is unapologetically high, you do get what you pay for. Relative to our household's sand box, it meant decisive next-level performance.