Nola's site condenses the benefits of Qualio's hybrid approach as follows. "It eliminates four major resonant problems that hamper all midrange enclosure systems and cause the sound to take on a mechanical coloration: enclosure panel resonance; enclosure air column resonance due to air trapped in the box which creates standing waves; delayed resonance due to sound being re-transmitted through the cone; membrane resonance due to the trapped air's stiffness causing a driver to resonate close to its operating band." Losing half the box thus sends those four particular horsemen packing. Stay thee gone from our living rooms!

Running an air-motion transformer open-backed has precedents with Holland's daudio, Germany's Wolf von Langa and Austria's Wiener Loudsprecher Manufaktur. Even my former boss Pat McGinty of the reborn Meadowlark Audio called a dipole AMT his favorite treble system until he discovered SB Acoustics' beryllium dome. In 20 years on the beat, I'd never yet heard a two-faced pleated tweeter so looked very much forward to that personal premiere. Monopole AMT I've sampled repeatedly and two speakers in my current harem—Acelec's Model One, MonAcoustic's SuperMon Mini—use them. So does the entire Mark & Daniel catalogue; and Monitor Audio's new Platinum G3 range. 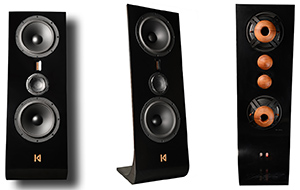 Also, I'd never yet heard an SB Acoustics Satori 6.5" mid/woofer referred to as an unofficial widebander. If anyone has the credentials to make such a claim, it's of course Cube Audio. This gig was heating up to become something special I thought.

I was dead curious about Qualio's industrial design given prior challenges in this sector of outliers. How would they integrate an open baffle with a bass bin? All their current models are very basic rectangular boxes. Now two of three drivers had to escape box prison. Tunnel. Dug. Breakout. Imminent.

Incidentally, Javier Millan of Granada's Kroma Atelier too caught the dipole bug with this forthcoming dual 12" Violeta open baffle which assumes exemption status in a catalogue of classic ported boxes. During a Zoom meet, Javier commented on the scale and ease of the dipole presentation; how he preferred his Mundorf AMT monopole; and the dipole bass difference. Again, the latter is where Qualio remain with traditional box loading to get more extension from less real estate. Who saw that coming? Given today's introduction and the Munich show's sneak peek, not I. It reiterates just how many different avenues and drivers Grzegorz and Marek must have evaluated before Project Q's light finally went green.

By October 28th we had the visual answer.