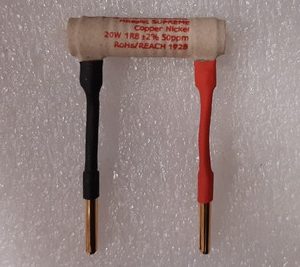 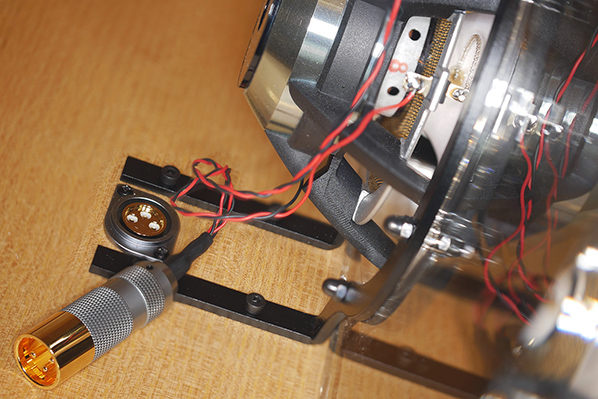 Connect speaker cables to lower terminals. Toe in as per usual. Sit down and play tunes. Done. The end. And in a less loquacious world, it would be. The IQ proved unusually unfussy and from the go impressed in revelatory fashion. That's a big word to presage plenty of loquaciousness to come. But first, a shoutout to responsiveness. Having bent the recommended 10W Mundorf resistors into the required U shape to insert via their bananas, both leads on one snapped off unceremoniously. The force required to push in the very tight bananas plus the 90° angle on the resistor leads proved unhappy bed fellas. I informed Qualio. By next morning I had the above photo and the actual parts in the mail. Mundorf's 20W resistor range features far stouter adjustable leads. It's those which now ship. From HQ to QC to IQ in one email. Bravo! 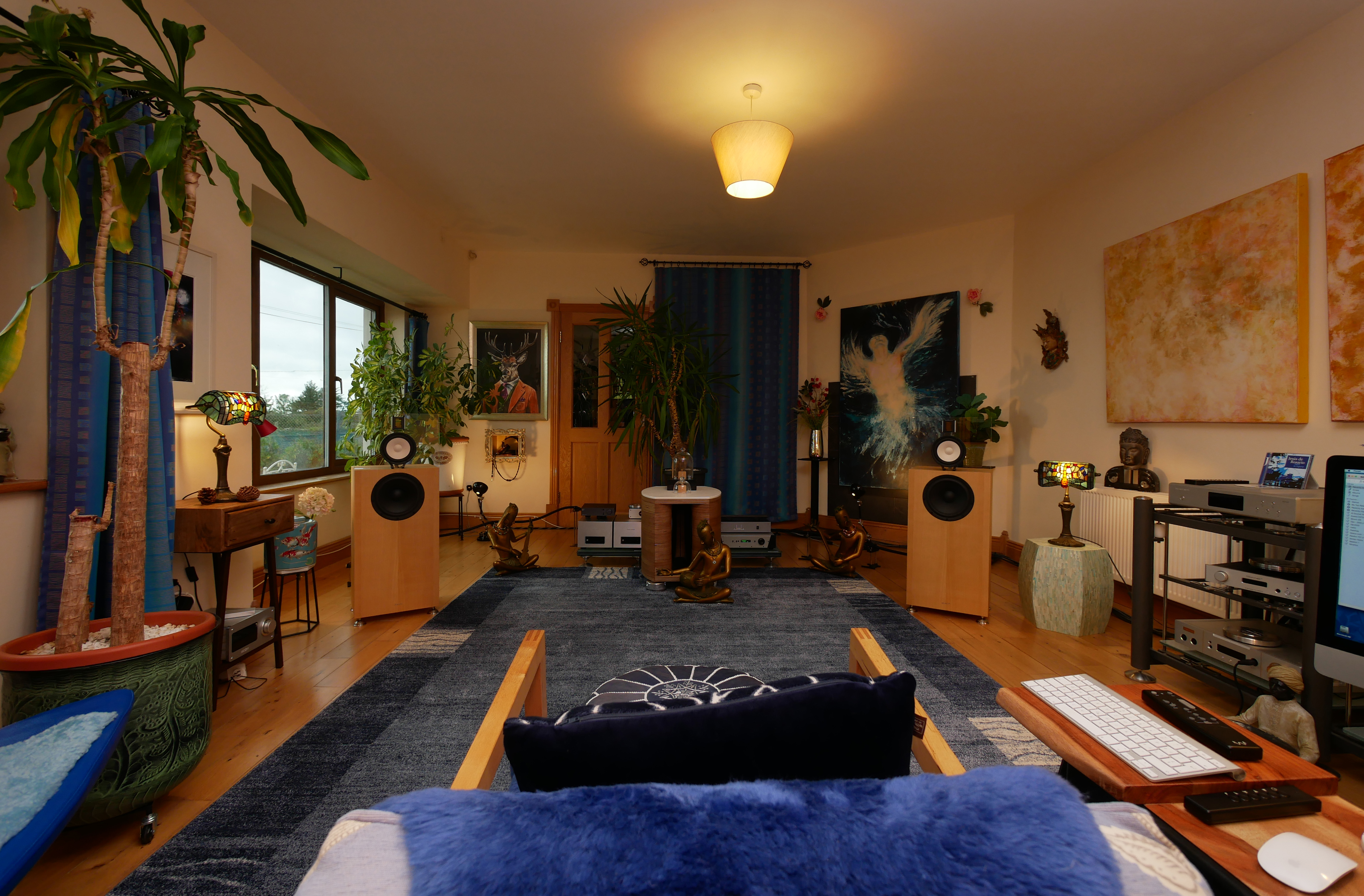 Use mouseover for loupe enlarger; or open photo in new tab to go full-size across your screen.

Another item of immediate note? The translucent baffles make these speakers look smaller than they are. It's as simplistic as it is cleverastic and effectaculous. Really! 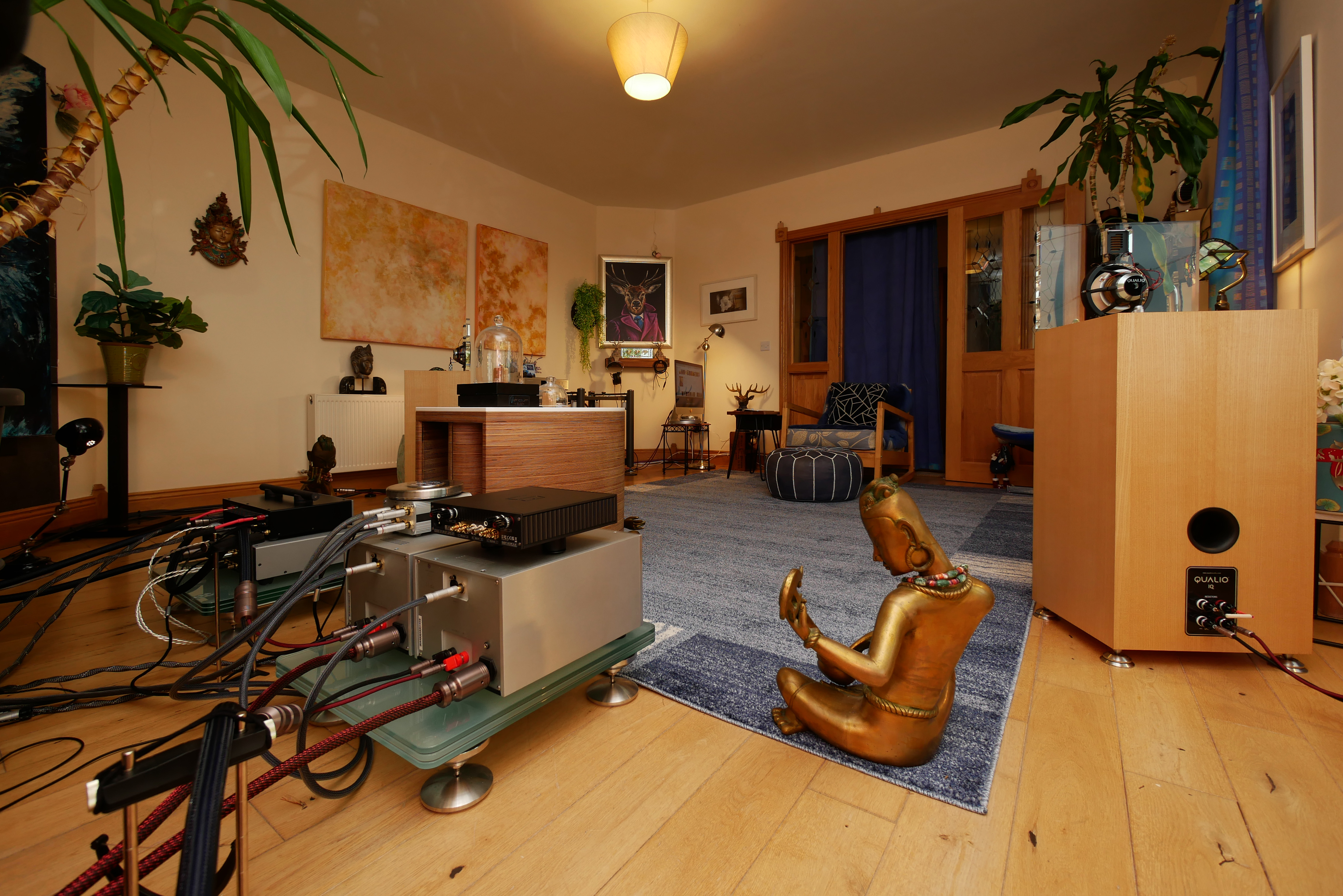 Use mouseover for loupe enlarger; or open photo in new tab to go full-size across your screen.

As my room photos document, quite unlike Grzegorz's own pad with its close wall placement, I had the IQ well out into the room to set up superior soundstage depth. It also better disassociates the sound from the front wall. It stops sticking there to stand discrete. Because I still had the subwoofer in the loop from before, I left it in for the first spin around the old block. Now my ear/brain could focus on just the 80Hz-up differences whilst the first two octaves benefitted as usual from the 'invisible' most effective room treatment of highly directional low frequencies dispersed in a cardioid pattern. 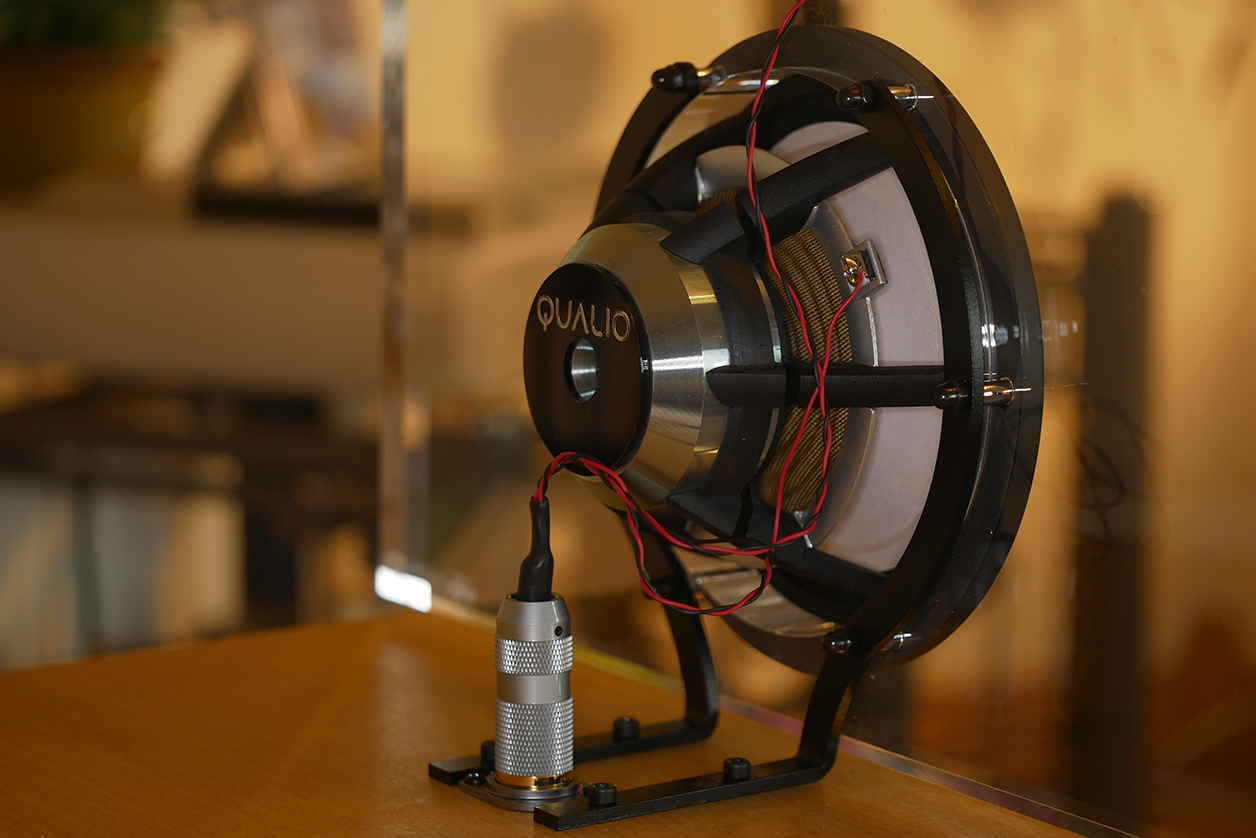 Limiting the bandwidth across which difference played out was most telling. Here's the 78 version. "Silly good soundstaging. Stop. No apparent sound-creation mechanics or origins. Stop. Great speed and purity. Stop. Endowment of the Dynamic Arts. Full stop." Let's unpack that for the LP version. Absence of box loading across the upper two drivers' bandwidth meant no common thru-cone blur from internal reflections. Losing this fuzzy softness so endemic to box speakers loved sitar, bouzouki, oud, Mohamed Rouane's mondol, Uzbeq tanbur, Turkish cümbüs and qanun whose plucked transients all pack particular paprika. Hearing those wiry attacks stripped off typical cotton taffy translated to tangible speed so directness and immediacy. A usual intermediary had gone. With 600Hz-8kHz plus -6dB reach well beyond it covered by one driver bestowed point-source benefits to stage depth and layering precision. What's more, no air trapped in a box pressurized the cone's back or tried to kill off half its acoustic output. That doubled in-room air activation to juice up dynamic jumpiness. But there was more. Classic widebanders run one driver down to 40Hz then up to 18Khz; or to ~10kHz into a super tweeter. This puritan decision hands off the vital power region to a lightweight midrange. It lacks the impact and snap of a proper woofer. Unlike a classic 3-way meanwhile whose midrange crosses to its woofer via steep 80Hz filter, the IQ rolls in its dedicated woofer three octaves higher. That endows the power region and lower midrange with the crack and shove of a specialist bassist not small midrange or do-it-all widebander. Finally Mundorf's accordion tweeter with its inherent displacement advantage over dome tweeters plus the energy dispersed rearward extends the wide Satori midrange's lucidity and acceleration all the way up to the top. That meant ribbon-level transparency with meatier dynamics.

I think that deleting the usual box-talk imprint from the mid and presence regions was the great facilitator of the IQ's astonishing imaging. If so, the open-baffle advantage wasn't primarily the resultant dispersion pattern. Rather, eliminating the telltale box origins of blurred timing no longer triggered my ear/brain's bullshit/artifice detector. It was no deliberate decision. Something had simply disappeared. This vanishing also subtracted my being incessantly if subliminally reminded that this sound really came from two speakers. Drop the box and the sound no longer squeezes out of a box. It reads super basic. So was the experience thereof; simple and perfectly obvious. Likely because the IQ cuts off dipole radiation well above any actual bass, I heard no excess reverb—bloom, boom—to render the sound swimmy, bloated or imprecise. Au contraire. The sound was exceptionally quick and energetic yet not at all haggard or lightweight. Quite the CV. Voilà, my attempt to squeeze a few hours of first impressions into verbiage that's not poetically vague but practically concrete.