2/ Adaptive trebling. With the original 10W 1.8Ω resistors waylaid, I'd started my auditions with the 1Ω jobs. Though occasionally just a bit forward, I really enjoyed their roof-down ride. It gave the music attractive gloss and sparkle, transients with strong harmonic content real vigor. When the 20-watt version of the 1.8Ω padding parts arrived, I could A/B Qualio's two minimum attenuation settings on the pleated tweeter. Though it enters at 8kHz far above any fundamental, it does on a relatively shallow 2nd-order slope. Because this dipole part is very dynamic and lucid, changes to its relative output make more of a difference than its high filter hinge would predict. It's an ace personalization feature and by being so obvious, wildly more useful than the ubiquitous 1-of-8 digital Sabre filter. Whilst a rotary pot might initially seem more convenient, locking in our final setting with a fixed top-quality Mundorf resistor is a far more purist and uncompromised execution. Since I'm somewhat of a treble slut—my favorites are Raidho's famous quasi ribbon and its Børresen varietal, Alan Pratali's ultra low-mass polymer horn tweeter and Raal's ribbon in their SR1a headphones—I could happily cruise at 1Ω knowing it to be just slightly hot. But I agree with Qualio that 1.8Ω is the correct value. So that's what I left in. There's gratuitous greed. Then there's good taste. 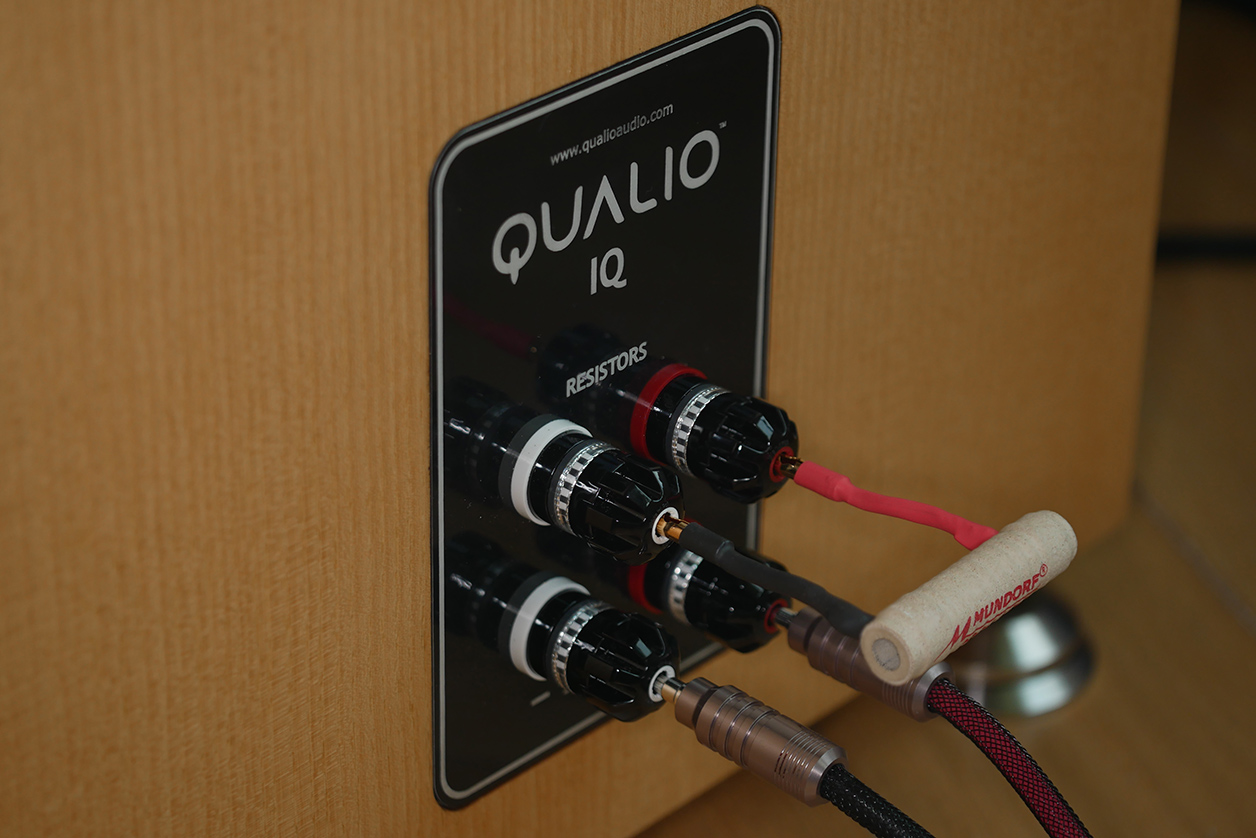 With it one can play Sœur Marie Keyrouz's "Ya Sayyida Hayati" at front-row levels all through the final climax and disappear in the intended religious experience rather than suffer a premature earthly recall from the recoil of fiery crystalline searing dialed up too high. The IQ deserves a shoutout not just for its adaptive trebling but first off, the choice of this costly tweeter in all its open-backed glory. I now appreciate why my former boss Pat McGinty rated a dipole AMT so high. It bundles speed, incisiveness, reach, sweetness and lucidity all in one ace package. Eltim.eu list it at €325 each. It's the opposite of a budget part and not what you'd expect in a €5.5K speaker pair at retail.

But it goes farther. Disconnect the tweeters entirely and hear the 6-inch Satori show off 15kHz reach. It's shocking behavior for a midrange but explains why the combination—Satori for sheer power, Mundorf for ephemeral airiness—creates such a splendid top end. It's really clever speaker design in action. Hence the name IQ has multiple meanings. It points at the speakers themselves. It also points at their owners for choosy discernment; then for refusing to spend double, triple or beyond to get such performance. It's a circle jerk of cleverness.

3/ Body building. Implicit in what came before but worth its own entry, the IQ's predominant dipole dispersion generates great tone body. In my rig it was on full display with DAC-direct drive into class A/B fast transistor amps. Despite (or because of?) this purist minimalist signal path, I wanted for no strategic injections to generate full-bodied very ballsy sound. The IQ recipe really caters to simple does it. To Grzegorz's Naim Supernait 3 reco, I'd add Kinki Studio's EX-M+ integrated. Forget tubes with their inevitable maintenance. Their very real contributions aren't needed, not even at subtle DHT preamp dosage. All of which segues inexorably into an award. But what should its credit read? Here's what I decided on. 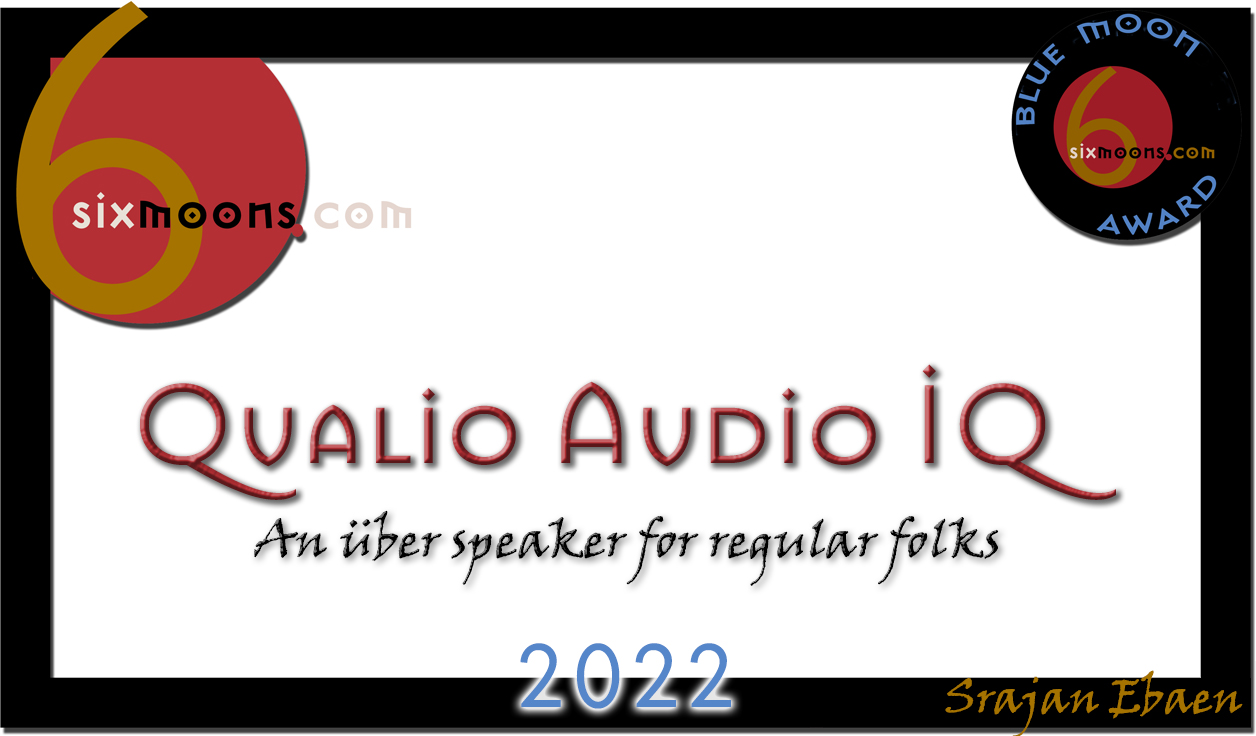 If we're happy to subtract extravagant boat-hull or multi-faceted builds, 5mm true piano lacquers and other odes to designer bling, the IQ ticks off all other über boxes I can think of. Whist 'regular folks' is another loaded term, most readers should understand what it means just fine. It's any person with a keen interest in ambitious sound for whom €5'500 remains a serious sum—perhaps the equivalent of a 2-week family vacation—but something still attainable given sufficient desire. Here it buys a full-blown surprisingly unfussy dream speaker; a Lambo in a Honda chassis. It's a full-range performer fit for even larger rooms. It's a widebander in disguise which runs its central midrange two octaves farther up than conventional 3-ways. It's a big Nola by Accent Speaker Technology for smaller wallets. Even finish choices including custom are part of this picture. And though Qualio the brand is new, its dynamic design duo from Cube Audio establishes instant cred and buyer comfort.

By now you might appreciate the other loaded word I inserted in an earlier page. Revelatory. If I could pick just one to conclude this sprawling tale, that'd be it.