Then came more news. "You already know about that very interesting floorstander I wrote about in my last email. We had purchased basically all available 3-5" drivers to test then readied our first big commercial batch with Mark Audio. However, the new design exploits the Visaton B100. That's a really amazing driver if quite costly for a budget project. We wanted our pricing to be super attractive since at the onset, the sales model was to include dealers. Then two days ago Marek swapped into an already finalized model a Visaton B80 in lieu of the Mark Audio Alpair. The midrange was clearly superior and the overall performance gains worth all associated inconveniences. We already have cabinets in production but can replace drivers with just very slight adjustments. Since we want the best possible sound, I see no option but to regroup with a direct-to-consumer approach, go ahead with the changes and delay the project's rollout by about a month. We have a few pairs of Visatons to take photos with, redo the website so a delay is inevitable. But we still want to take the speakers to Munich even if just to show on static display." 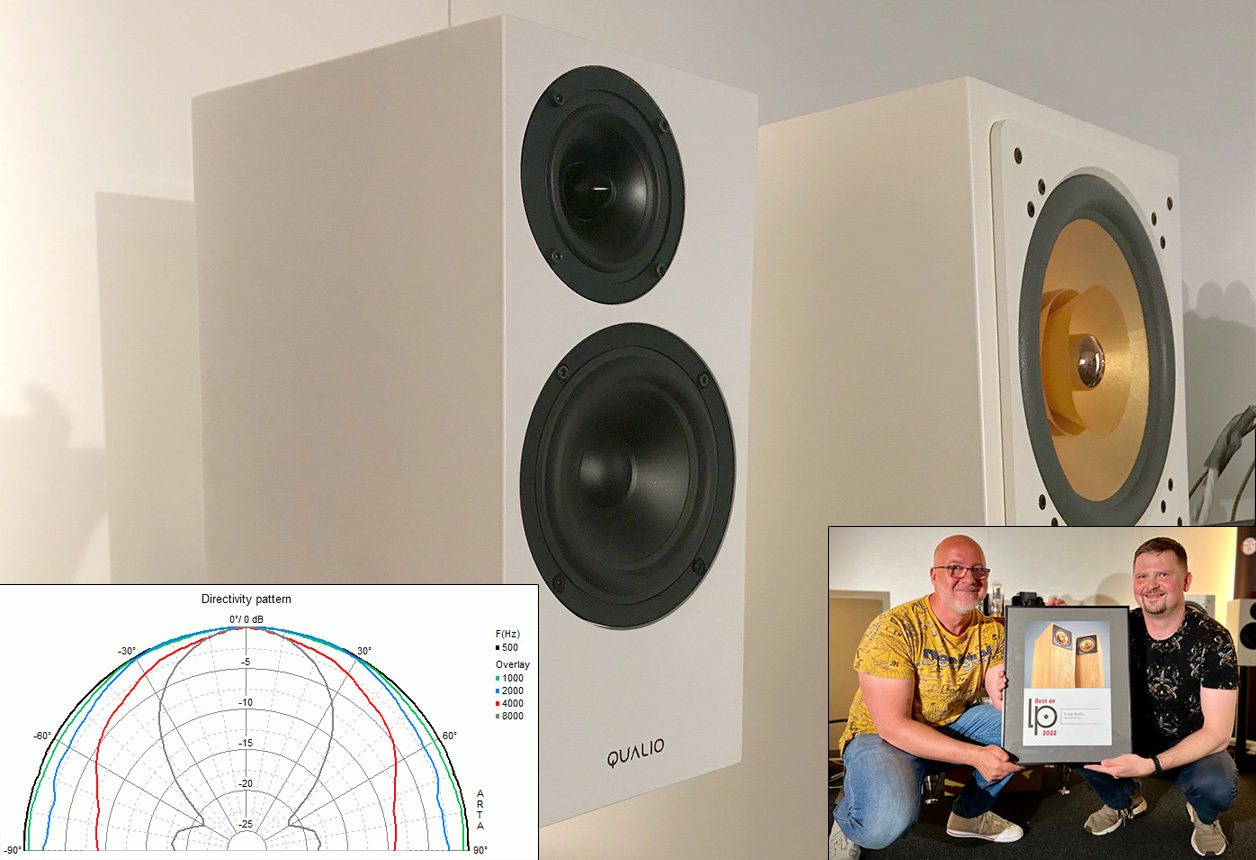 Such are relentless R&D's unpredictable ways. As consumers we're rarely privy to the many switchbacks that might have preceded a final product. It's why my rewrite didn't expunge the earlier Alpair 5.3 mentions or photos. The latter now simply render faded. Leaving them in says more about Qualio's design ethos than self-congratulatory ad copy could. When these two men claim that they want us to enjoy the best sound they can possibly give us for our hard earnings, they mean it. They walk extra miles to make it so.

Veni. Vidi. Visaton. Gaius Julius Caesar would have approved. And he conquered half the known world. Competition-aware punters know of the silvery 3" wideband tweeter Sven Boenicke uses across his speaker range with often—or exclusively?—a shallow 1st-order filter for broad actual bandwidth. One of that driver's many virtues is uncommon off-axis dispersion. It plays to why the Swiss speakers excel at extra-wide soundstaging when set up accordingly which they always are at shows. Would it be far-fetched to expect similar lateral freedom for Qualio's Visaton [B80's directivity pattern above]?

By May 13th Grzegorz added that their new monitor and first floorstander both had embraced the B80 not B100 so the 3.3-inch not 4-inch version. Hitting Munich's M.O.C. not rather out of breath seemed a bit of a task with these many last-minute developments. Just so, a Qualio monitor in white made their display right next to Cube's Jazzon whose driver has adopted a foam surround in lieu of the rubber version I reviewed. Also at the show Grzegorz was presented with a 'Product of the Year 2022' award for their Nenuphar Mini by Germany's LP Magazine. The team were on a roll. By July 2nd we had syndicated Dawid Grzyb's review of Jazzon with the new foam surround. In an email, Dawid had added that he could happily settle down with Jazzon driven by Enleum's AMP-23R if he retired.