With my tracking # came more intel. "The first plot shows the standard on-axis and 45° off-axis response with the recommended 1.8Ω resistor on the AMT to get you started. That's the voicing we prefer and used at the Warsaw show. But it's of course room and listener dependent. The second plot shows the lowest and highest on-axis setting with a 1Ω vs 5.6Ω resistive value. Also find a photo of the review pair. Since we're still awaiting our painted cabs, what's on the way to you is a beautiful satin Ash pair. There's something very peculiar about dipole propagation of high frequencies. Even though the measurements don't suggest it, there's definitely no sonic imbalance but a cornucopia of detail and information coming off the AMT even with a higher attenuation value. Two resistor values come standard to give two different tunings. Our optional precision kit which we shipped you as well holds a total of six values of copper-nickel Mundorf resistors and costs an extra €140."

As shown next, IQ's Wilson-reminiscent resistive tuning pre-wires to jumpers. Those—duh!—go into the upper speaker terminals on the rear labeled 'resistor'. There's no soldering, de-soldering or screw terminal involved. Qualio went convenient bananas instead. Also included are port bungs to seal the bass loading. For protection, the Plexi baffles ship disassembled. They terminate in an XLR which plugs into the bass bin's top. Since any XLR will only seat one way, correct polarity is guaranteed. Four hex bolts then affix the baffle via two steel braces and the included hex key.

Even granny could do it. My review pair's only non-standard item would be its aluminium baffle braces. Qualio were still waiting on their thicker far more rigid steel parts. And the packaging materials weren't final yet. That simply seemed poor reason to postpone this assignment. So my injection of speaker IQ was incoming. It'd be merely temporary of course; but I'd feel really smart for a few weeks to make up. Hey, some of us need all the help we can get.

"We fine-tuned the IQ with the best components for the job, looking for the greatest performance without going to the moon on price. So we put all Mundorf EVO/EVO-oil parts on the Satori midrange and AMT. The woofer sees electrolytic caps and Jantzen copper air coils. During listening tests we found a wax ribbon coil for the midrange that's a really amazing performer. It provides plenty of body yet keeps the vocal range precise and natural. All internal wiring is copper litz which we selected from many other cable options." 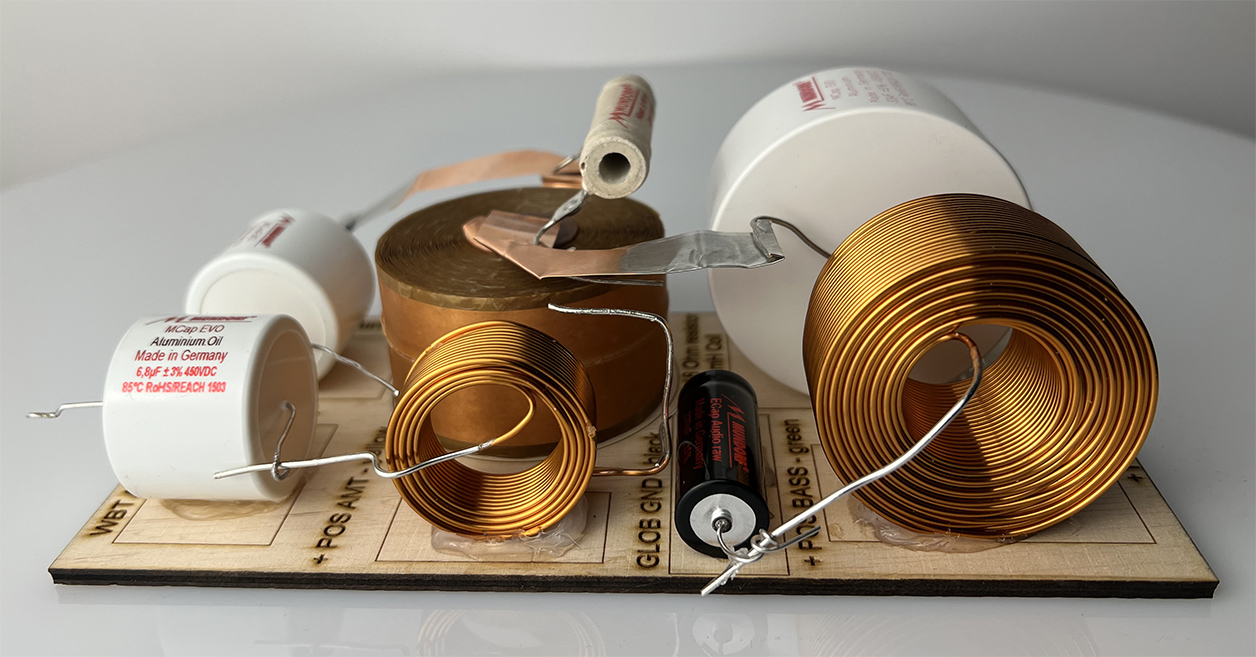 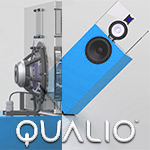 "After listening to the character of several different speaker terminals, we knew that we wanted WBT. However, theirs protrude a lot beyond the main enclosure. I wanted one last upgrade for transport safety and convenience. We designed and already ordered a special terminal plate so the posts don't protrude beyond the back of the case. Now there's no risk of damage when setting up the speakers or unpacking them. These plates are thermo-formed 7mm ABS so sturdy as a tank. We get the safety and convenience of popular off-the-shelf brass terminals plus the high-end design and sound we wanted." It's true. Budget speakers invariably use concave plastic bays while upscale speakers bolt upscale terminals directly to the enclosure or onto a shiny metal dress plate. Either way they stick out like a thumbs up; or occasionally sore thumb. Eliminating common risks particularly with direct sales is the smart play since many overworked delivery drivers may not bring their A game late in a day. I've seen heavier bigger boxes pushed corner first off a lift gate. I've seen others unceremoniously dragged along gravel because of a flat dolly tire. Add miserable weather to create a rush. Where Big Shipping Corp don't do overtime pay, laziness, exhaustion or a foul mood all know Mistress Mishap. Planning ahead to keep her on vacation and not at your door is good practice.

More good practice on my end this time was moving in Kinki's 250-watt EX-B7 monos. They replaced a 25wpc Enleum AMP-23R dwarf which usually serves 93dB sound|kaos monitors to perfection. I also bypassed the 80Hz/4th-order active icOn crossover to extricate the usual 2×15" sound|kaos sub from the residential equation. Most IQ shoppers won't even think sub much less add one. I'd thus review the Polish visitors full range. Should 30Hz deliver as promised, bolting on an extra ten cycles to 20Hz would be mostly Quixotic for music not movies. Of course that's not why I use a cardioid sub in the first place. Extra reach is just a fringe benefit. But that's a story I told elsewhere already many times. We needn't regurgitate it here.

Time to set up.