Chaos reality also meant that the wife/partner of his wood-turning shop had fallen sick. This caused a delayed dispatch of Vox 3 cabs to his Feutersoey workshop. The actual practice not theory of chaos is always to adapt and improvise. I'd hold that tune until it was time to play it. I didn't think that attraction strange at all. Just in time for Munich, the bronze mesh covers for the woofers arrived and Martin had this Walnut pair running laps in Switzerland to be properly pumped for Germany. I'd get my loaner pair right afterwards. A matching Bakoon AMP-13R delivered one week prior. I was all set to hear the Vox 3f like its designer does.

At HifiDeluxe 2019, Vox 3f alternated with an prototype sound|kaos open baffle which math would call Liber-8 for its six Enviée woofers plus two Enviée widebanders. The six woofers net slightly more cone surface than the single 18-incher of the Libération. Two pairs of Vox 3 showed off, one on metal stands, the other on wooden perches.

"The denser metal leg increased bass performance to be our final choice." When the speakers were airborne, "I also sent wooden legs so you can compare the two. To fit, just remove the T-plate from the speaker and bolt it to the walnut support. The longer M6x35mm bolts are for the base plate, the shorter M6x30mm bolts for the top of the stand and the speaker connection. Don't overtighten the rubber grommet inserts. The T-plate should not touch the enclosure." 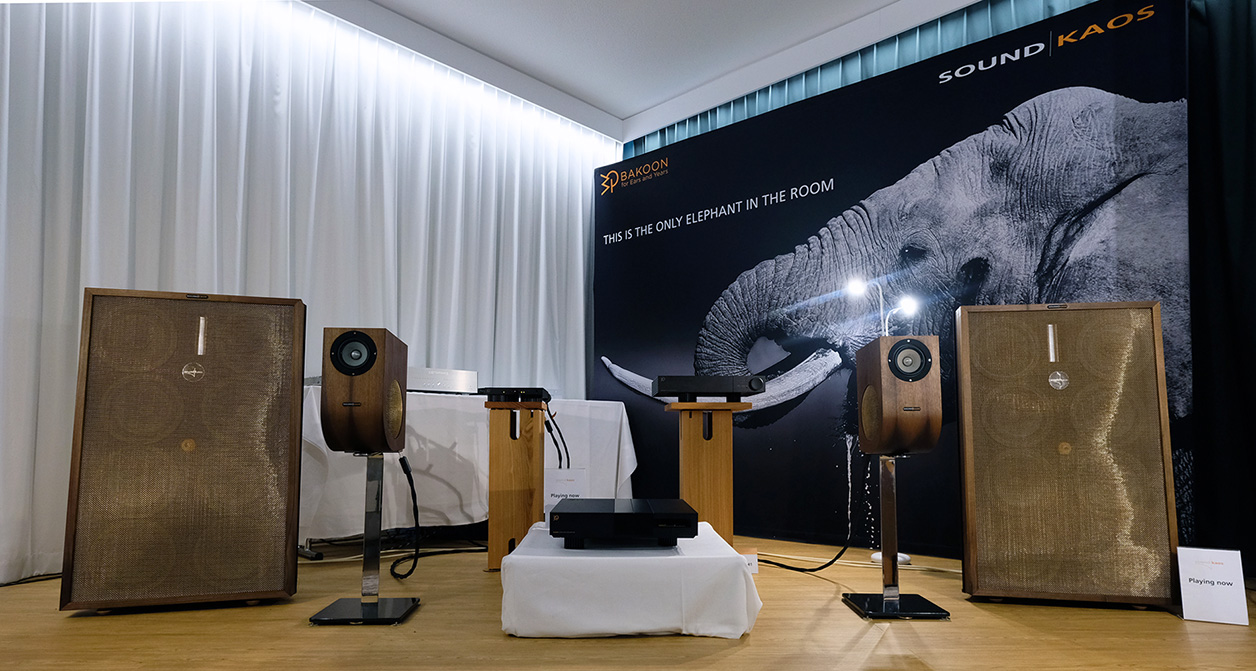 As to any pachyderm, "this is the only elephant in the room" was the byline to the big tusker on the poster. Leave it to Martin to have the last word. As luck would have it, just then Grandinote's Shinai 37wpc integrated amplifier arrived in Westport as the model Martin had shown his first Libération with three years prior. That gave me a second set of pre-approved electronics. Make it rain? 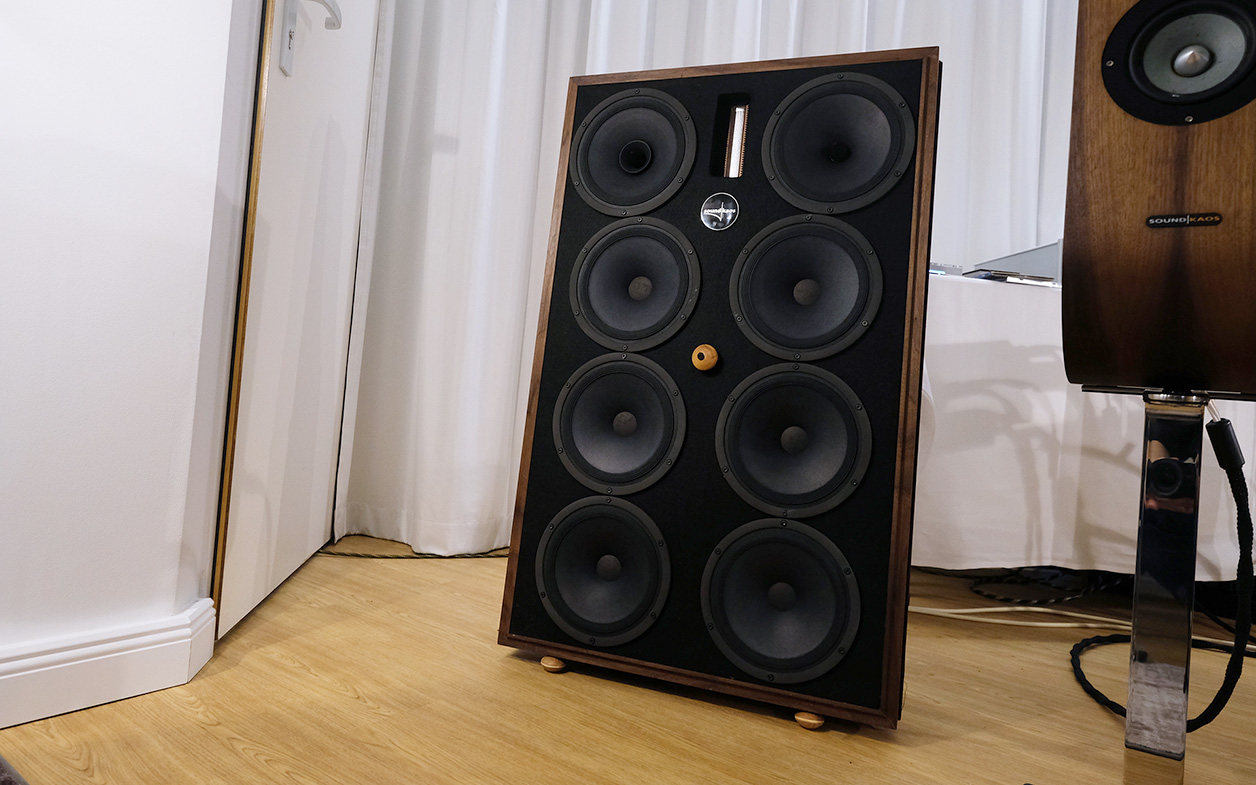 To take competitive measures, our Kroma Audio Mimí monitors for similar coin—their optional Krion stands alas are significantly dearer than the sound|kaos types—would make for the most meaningful comparators. 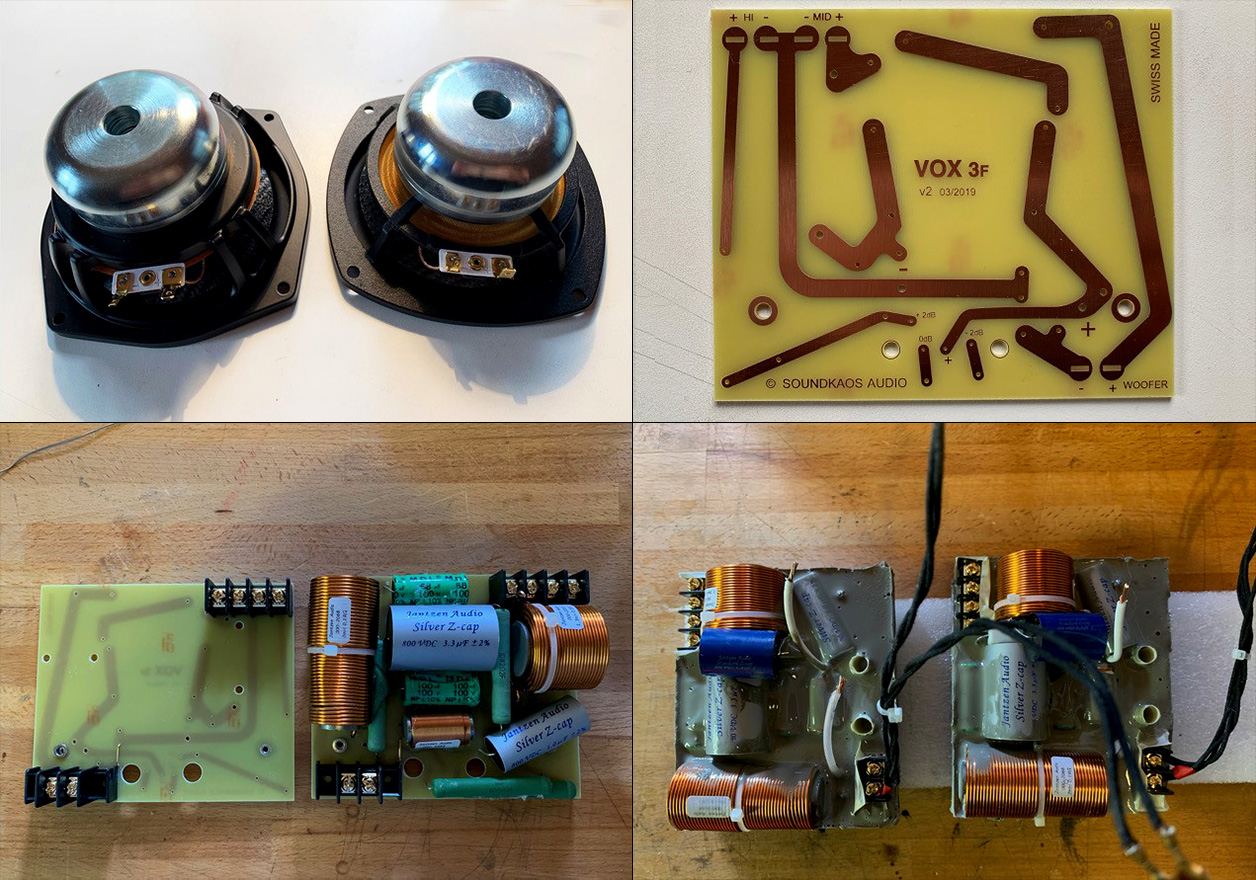 "Above you see the new and old 13cm woofer side by side to show the beefed-up new basket. Then comes the crossover board in various states of assembly. I was quite surprised by how much the PCB improved detail, blackness and a more refined sound. The final step is potting the assembly in a rubber compound. No expense spared of course."