Behind the wood for some Vox 3f tech. 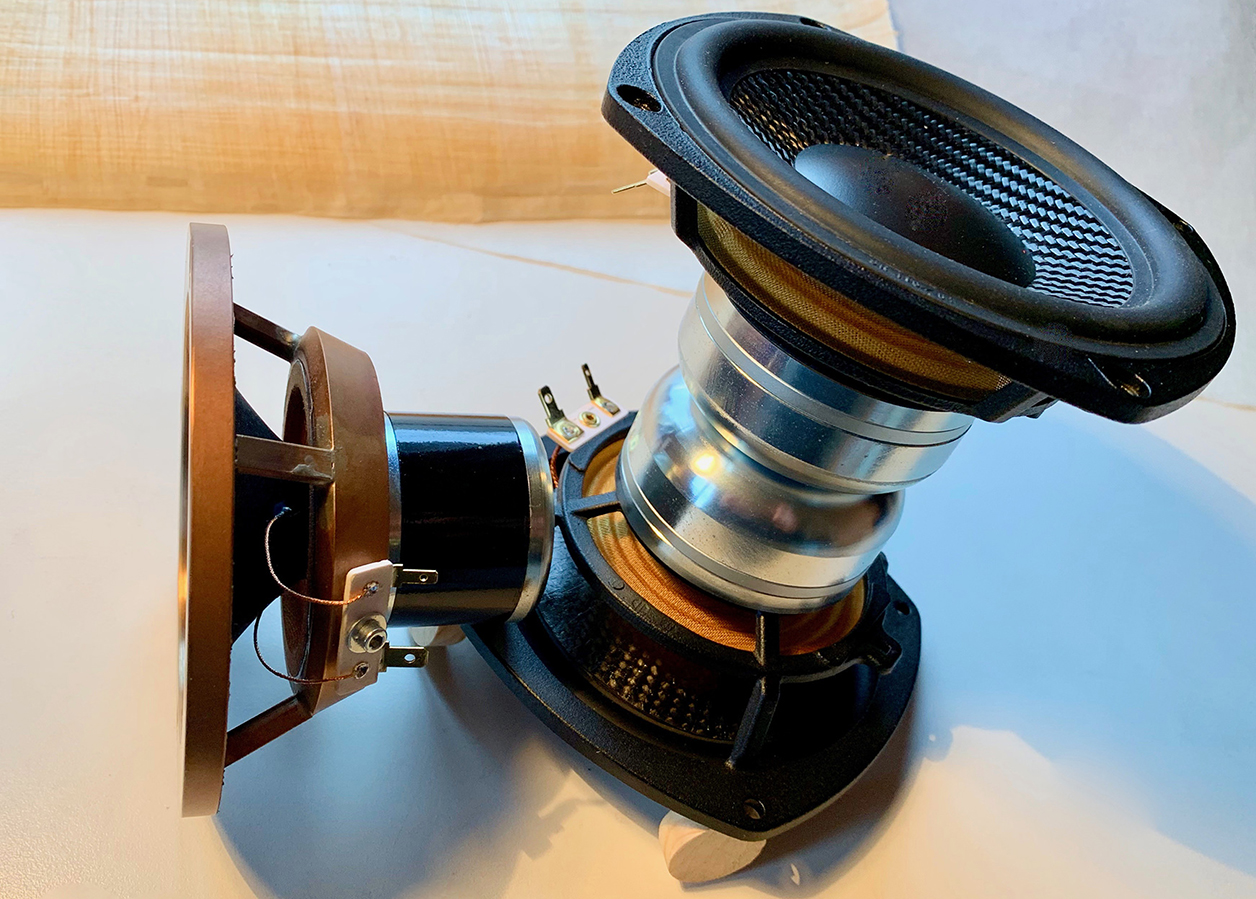 "The two 5" woofers are the usual high-standard Galm Audio drivers. Ours were made to Chris' specs with carbon-fiber membrane, 37mm 4-layer voice coil and neodymium motor. These voice coils are complex beasts that require very tight tolerances. Armin wasn't that keen on them mainly due to their low 84dB sensitivity. Chris insisted on going down the force-canceling back-to-back route. 'Has to be a proper job' were his words. By doing this, we also benefit from the 6dB lift of paralleling two drivers. This brings overall sensitivity up to around 89dB." 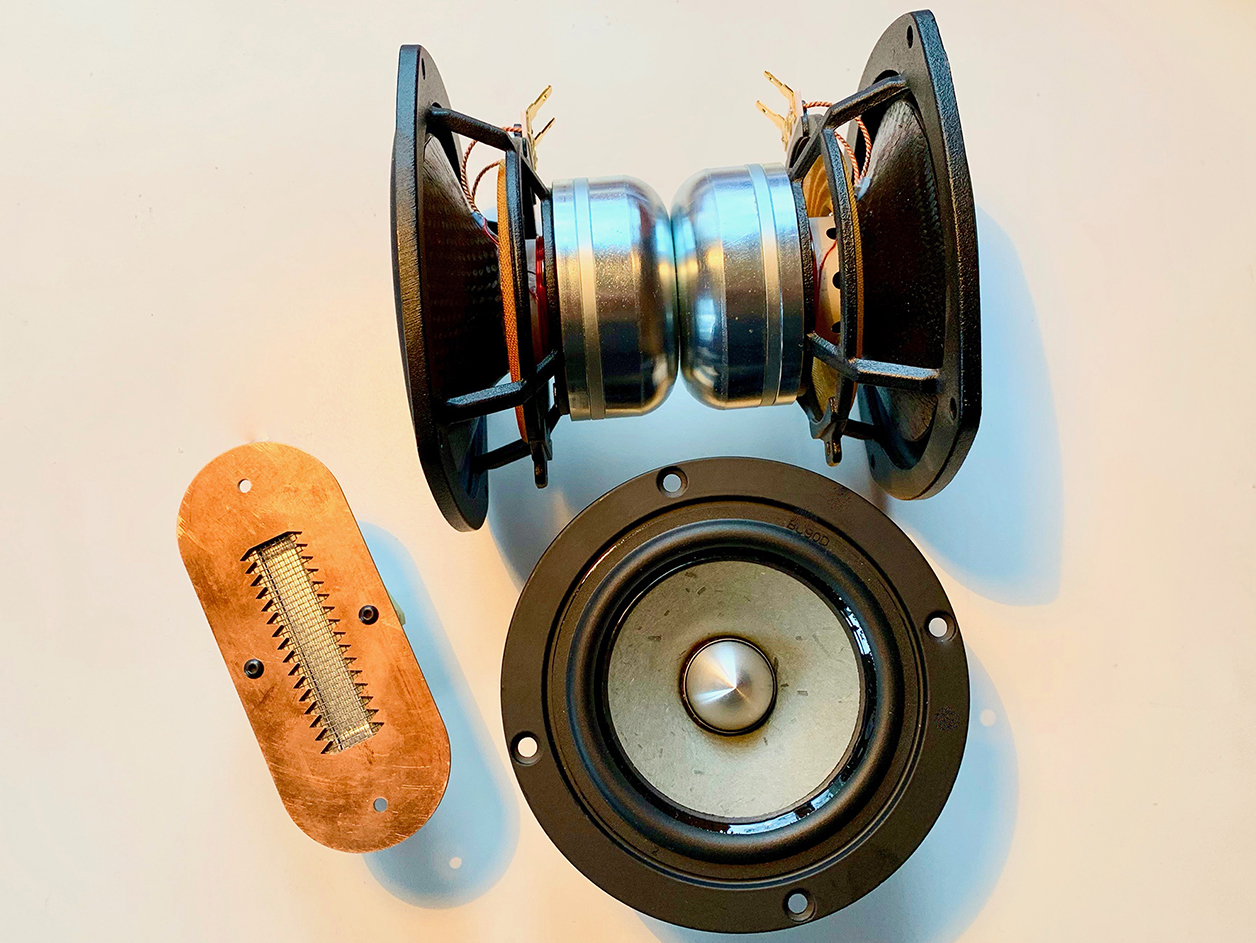 "These woofers are on our usual 2nd–order filter and come in around 200Hz in a sealed compartment with two of the 10cm² ceramic pads for some velocity damping. As you know, I'm not a fan of that soft fluffy stuffing which seems to go all woolly. The port is tuned to 35Hz. The TangBand is off the shelf and has a bamboo membrane. We run it fully open at the bottom but it does need a few notch filters and a gentle roll-off at around 10kHz where it hands over to the small Raal 64-10 ribbon. This again is just on a 2nd-order with a single cap and I had Raal adjust their transformer windings so we don't need to use any shelving resistors. It also has a custom 2mm bronze face plate." 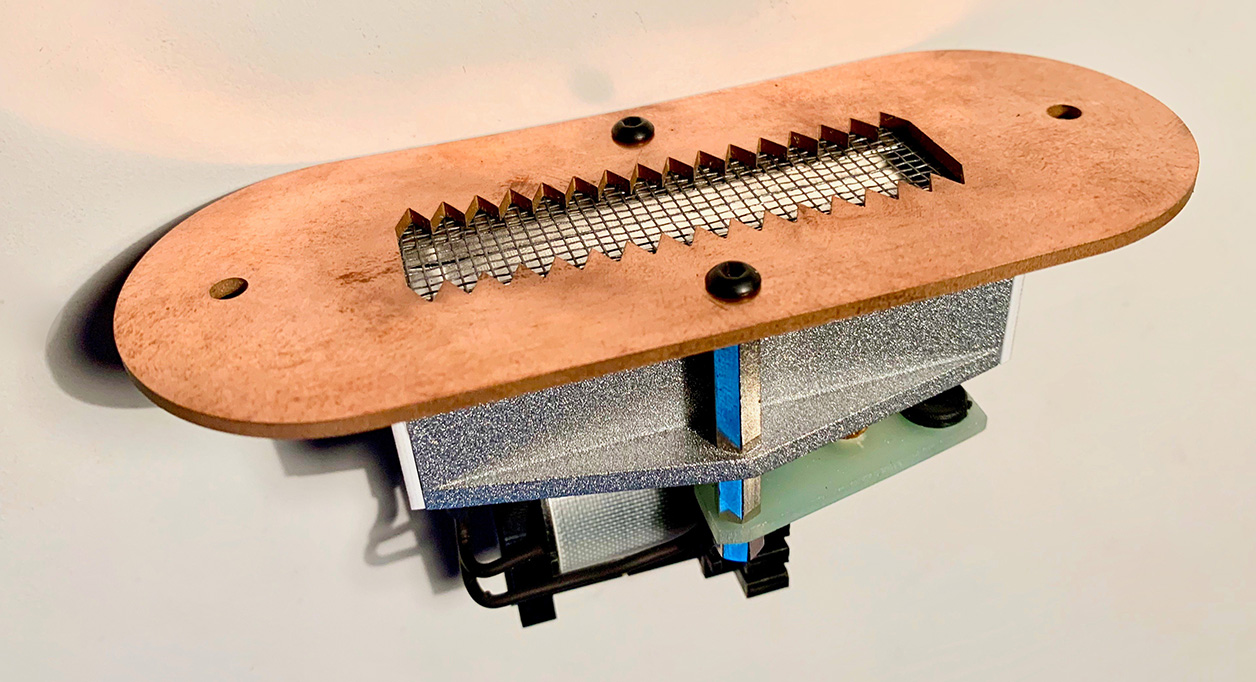 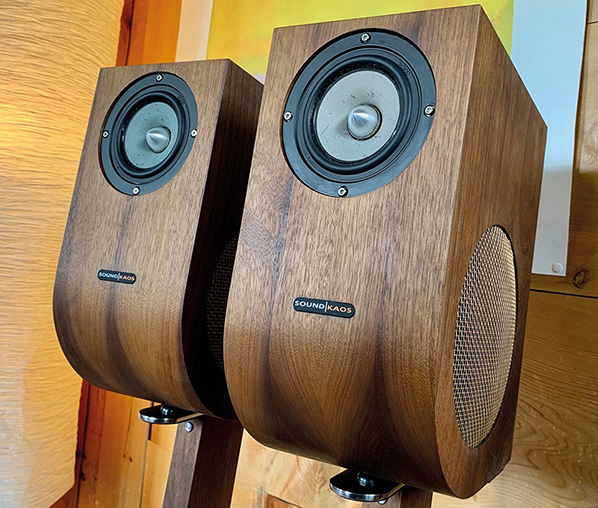 "So all in all, we managed bandwidth of 35Hz – 35kHz. That's pretty amazing for such a small speaker. The front-facing ribbon version sounded very good but with two side-firing woofers, the spectral and spatial image was LF-centric. I felt that it needed a similar halo effect in the HF region, hence the upfiring position. It also cleaned up our cosmetics where two drivers on the front looked a bit cramped."

By February 26th, final tweaks on the Vox 3f were in the end zone. "Filter sorted but we did some further investigating on the woofers and found the cast aluminium basket too weak for the large 37mm magnet. With 2/10th of a millimetre clearance on the voice coil, it just takes one good knock which will of course happen in transit and it goes out of alignment.

"Armin has sourced a stronger basket but it's going to be a few weeks before he receives them. There's also a ribbon delay from Raal who are full-on busy with their SR1a headphones so I will not get these until end of next week.

"Finally decided to add some bronze wire mesh covers on the woofers which are being made at present. So all in all we are looking at mid March for the Vox 3f. Vox 3a could be around May, only just doing my first attempts at membranes."

By mid March, Martin had booked a room at the alternate Munich show of the Marriott Hotel. He was doing T-shirts for the occasion. An early group email wanted feedback on the favorite design. I voted elephant.

The Indian parable about the three blind men describing an elephant is as ancient as it remains contemporary. "His legs are like marble columns." No matter how the three guys go about it, their attempts fail. They've never actually seen an elephant. Many opinions in the hifi fora are like that. Then there's that elephant in the room; about sound|kaos the name and people not knowing what to make of it. Martin was poking fun at his own expense. It's the best humor there is.