Options. Checking in with Martin by early January to confirm syndication of Dawid's Libération review, I learnt of the final model designations 3f for TangBand's ferrite motor; and 3a for Envieé's ALniCo. I suggested that I cover both to let buyers know of the sonic differences. "Okay, once Chris signs off on the updated filter for the upfiring ribbon, I'll get a pair over to you. Have placed order for 10 pairs in Walnut and Cherry. We can then follow on with the costlier version later."

For the custom, his usual tri-country teamwork between Armin and Chris Ellis of CE Electro-Acoustics had to involve iterative driver prototyping in Germany, acoustic measurements and filter trials in the UK plus Martin's own auditions in Switzerland. CH is also where Simon Oehrli crafts the solid-wood enclosures for sound|kaos just outside Gstaad. Simon Lee in South Korea had already explained to me that his speakers are developed with Alain Pratali of Aurai Audio in France. This toggles speaker design between Marseille and Seoul to add R&D time and cost over a single location. Martin's setup wasn't centralized either, especially with him back in Switzerland. I imagined plenty of video conference calls and sundry prototypes bouncing back and forth across the Channel. Hello Brexit.

In various reports of the Warsaw show, the sound|kaos/Bakoon exhibit had made impressions. SoundStage: "Some speakers are so unique, they jump out at you. Looking vaguely avian, the sound|kaos Libération speaker runs three open-baffle drivers: an 18" woofer from Beyma of Spain along with two open-baffle midranges, one of which is fitted with a whizzer cone so that it can reproduce higher frequencies than the other. Complementing the top end is one ribbon tweeter right where the bird's beak would be (it looks a bit like an owl to me). The grilles, which come off, are made of a nicely finished bronze mesh. sound|kaos quote a believable 95dB sensitivity. The Libération retails for €17'400/pr in a choice of maple or walnut. As for how the pair sounded, let me say this: Jason Thorpe didn't want to leave this room and for the next hour raved about how rich and enjoyable these speakers sounded. sound|kaos was also debuting another completely different speaker, the Vox 3 which employs one full-range 4" front-facing midrange driver, two 5" bass drivers (one on each side) and an upward-facing ribbon tweeter. It's a tiny speaker but that's at least a lot of technology for €5'500 per pair." 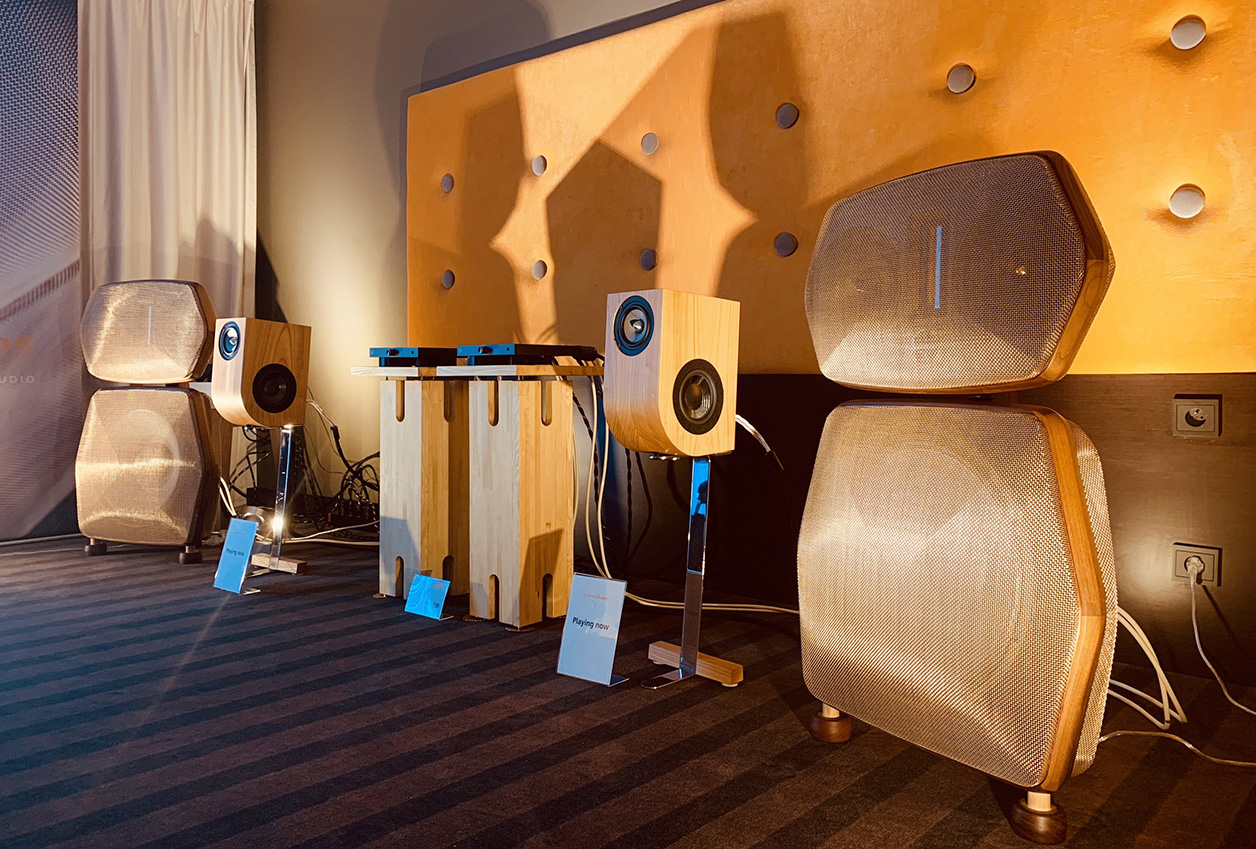 From our show report: "Doing a show as journalists isn't solely about having fun. It's also exhausting, with long days on your feet facing crowds and awaiting photo ops without too many people in the frame. Those are the physical aspects. The mental aspects come from actual listening. After 'x' number of rooms, the part of the brain dealing with hearing gets overwhelmed, loses sharpness and needs a reboot. The best way for a reboot is a really good-sounding room. Of course all rooms advertise themselves as such but finding one which actually delivers… boy, that is challenging. With a show the size of Warsaw, returning to such a one is mostly just not feasible. Hence the endemic fatigue factor…

"…Entering the next room met us with a smile from Martin Gateley of sound|kaos, creative spirit behind innovative Swiss designs.

"When we entered, the dipole Libération filled the room with some Alan Taylor. Amplifiers in double stereo were the new Bakoon AMP-13R. With 25wpc the Libération's 96dB sensitivity, that was ample power. After the Taylor tracks, we were treated to some Hadouk Trio. It demonstrated the copious SPL capabilities of this open baffle. At some point, Martin switched to his new Vox 3 stand mount. We deliberately wrote stand mount because in our view, monitors are designed for the near field with a thus more directional character. The Vox 3f is different. Yes there is a front-facing 4" widebander like a monitor might use. But there are also two 5" sidefiring woofers breathing through a rear vent which asks for some listening distance. Then the Vox 3f is topped off with a ceiling-facing Raal ribbon super tweeter.

"With the Vox 3f taking over air excitation duties of the room, our brains needed some adjustment. The massive yet open Libération sound had to be cleared from our aural cache to make space for the new sensation. That was more intimate and lighter to the touch – no surprise when it was a small-driver vented box, not big-driver dipole. But after a minute of adaptation, the similarities in character became clear. Martin then switched back and forth between 'big' and 'small' a few times to confirm perceived family ties. No doubt this was one of those rare 'reboot' rooms we mentioned in our intro." 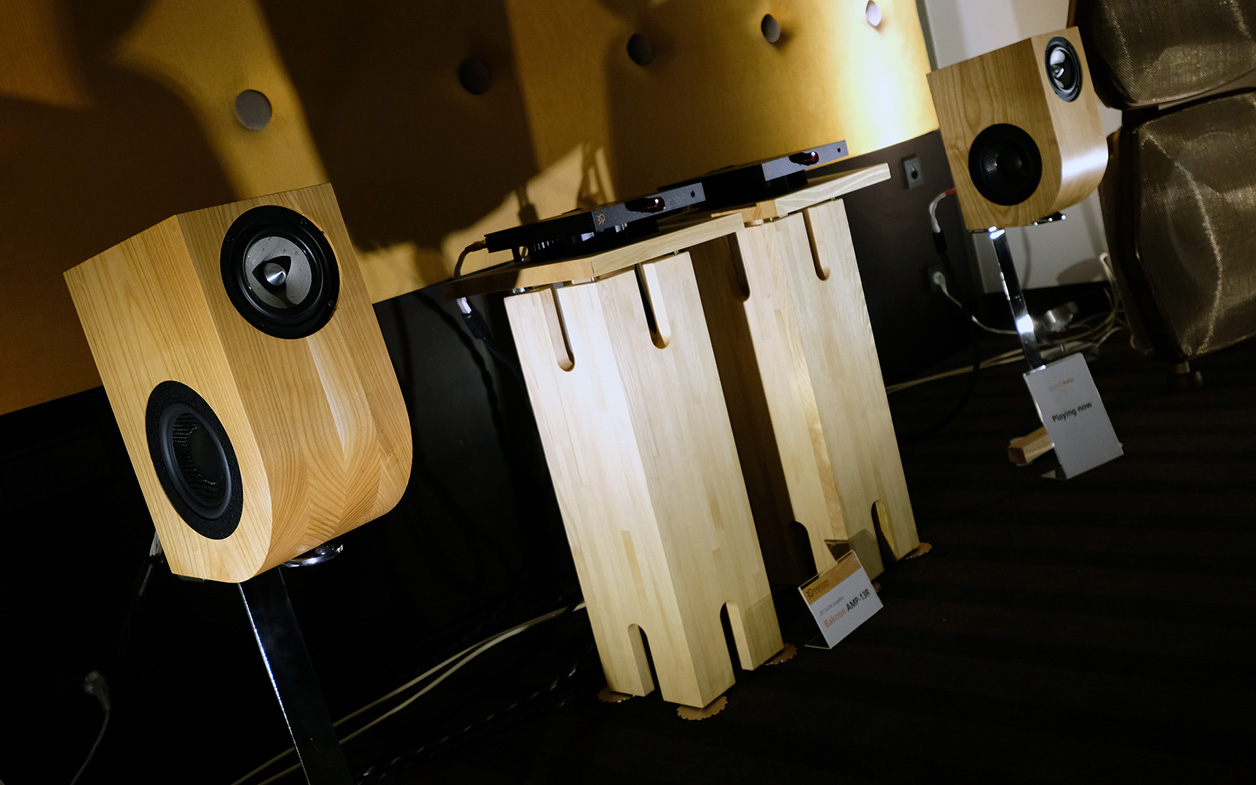 With TangBand [photo by Dawid Grzyb].

From Dawid's show report on HifiKnights: "This room I looked forward to. Martin Gateley of sound|kaos showcased his unusual Libération floorstanders matched with Bakoon compact AMP-13R fed via Denafrips Terminator DAC connected to an unknown streamer via I²S. Interestingly, the same integrated Bakoon was married to Martin's far smaller Vox 3f and the Swiss engineer could easily switch between the two. In short, this hardware provided one of the most captivating and very best experiences for me this year. These monitors reminded me of what my Boenicke W5 have been pulling off daily at my flat for years now but Martin's creation sounded even more organic, tangible and open, likely due to all the associated hardware." From his Libération review, we also learnt that Dawid thought those dipoles to sound their very best on the tiny Bakoon amp with variable gain, besting his Kinki Studio EX-M1 and Trilogy 925 integrateds and a FirstWatt F7 with iFi preamp. Not only did it suggest that this brand alliance was based on sonic mutuality. With an AMP-13R inbound for review, it also promised that I'd get to hear Vox 3f like show visitors to Denver and Warsaw had. Finally, Martin's reaction to declining dealer health has eased ownership. Whilst a few truly committed dealers continue to promote his products on much narrower margins, the core business plan shifted to direct sales a few years ago. This lowered pricing across the range.