More facts 'n' figures. "Some comments on the people involved with the design and production of Romy 20SE. Once Georg laid out the basic requirements, Zeljko Nastasic did the principal design and prototyping. In the course of proof of concept and prototyping, we discussed, tried and tested many aspects before agreeing upon the final design including the exterior and mechanical details. Once the design was elevated to production status, Aleksandar Weisglass responsible for the manufacture provided invaluable contributions as an experienced production technologist to streamline details of the final design and production process. Both men have decades of experience in electronics design, manufacturing and service support including high-reliability military and medical electronics. Being the originator of the project, Georg handled final tweaking and sound tuning as well as manage the entire process.

"Regarding performance figures, just like with any tube amplifier, output power depends somewhat on the impedance character of the connected speaker. Actual designed power output is achieved on load impedances which more resemble what one actually finds in real-world speakers. Like all SET amps, max power is declared at 10% THD which we measure at 55Hz. The reason for this is one of our design goals. The machine should competently reproduce even the bottom octave commonly used in music (27.5 – 55Hz) while catering for the fact that many speakers have sharp impedance peaks and troughs in this range. While the distortion figure may look surprisingly high by tube push-pull and especially solid-state amplifiers, it is a commonly defined measuring condition which is in fact found in the recommended operating conditions for nearly all SE-capable audio power tubes. 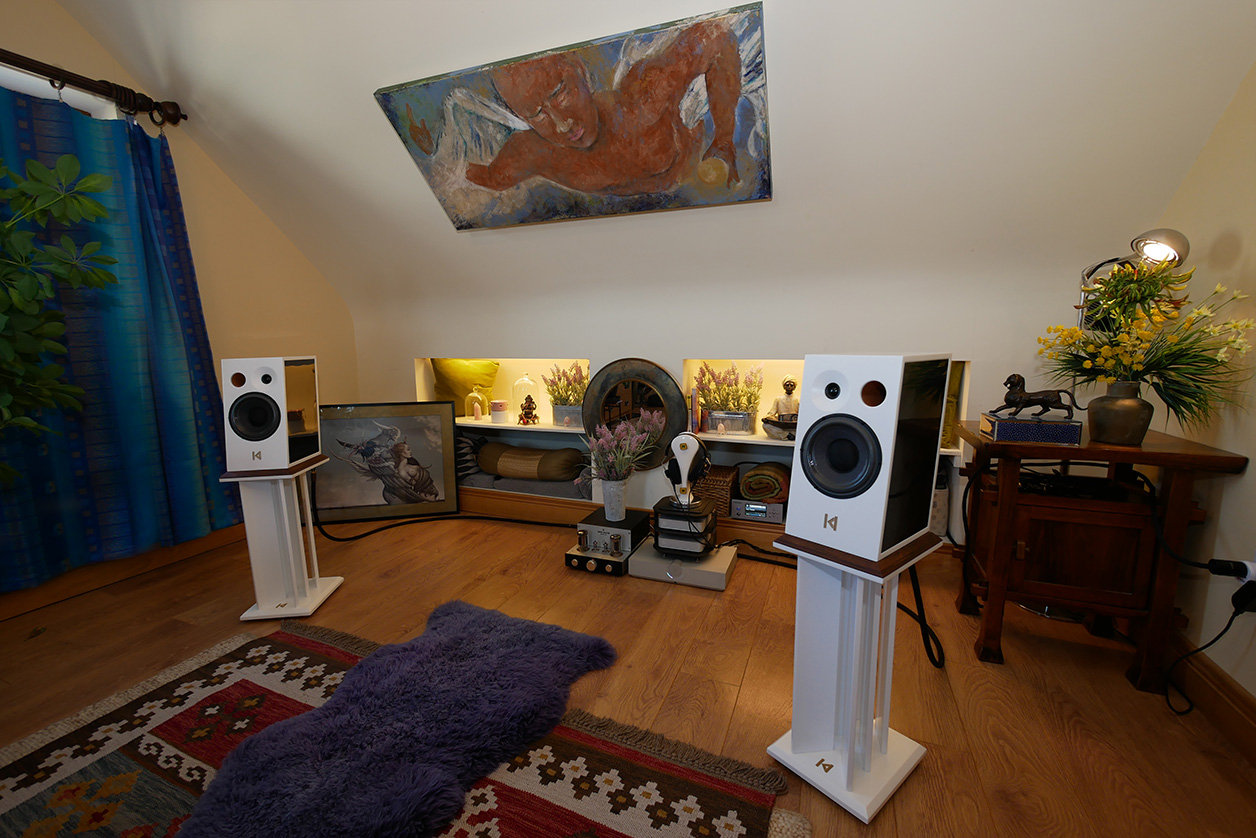 With Kroma Audio Mimí preceded by COS Engineering D1 DAC and Soundaware A280 SD card transport.

"It is also worth remembering that a well-executed SET produces distortion consisting of predominantly 2nd, some 3rd and virtually no other harmonics at all. Because this profile is natural to the harmonics which the human ear produces itself, our hearing filters this out so reproduction remains remarkably clear until one really pushes the amp into hard clipping, in other words enters the 10% range. That said, working in class A2 has added benefits like nice soft and symmetric clipping rather than nasty blocking distortion which happens in most other SET amps. To conclude, rated output power is therefore declared at 6.8Ω and 3.3Ω for the 8/4Ω taps respectively, measured at 55Hz and 10%THD as a sort of worst-case figures. For speakers without nasty impedance quirks, the distortion at 15 watts drops to less than 3% (often close to 1% if speaker impedance is well behaved) which is only 1.25dB quieter; and all harmonics from 4th on up vanish into the hum+noise floor which should be at least 90dB below rated output. For most sane loads, the response remains within ±1dB or better from 20Hz to 20kHz and this is measured at half rated power, not the usual 1W. Even so, under most conditions the amplifier will provide full rated power from close to subsonic up to supersonic frequencies. While proper audio band response is considered a matter of competent design, we decided it is very important to provide proper performance 'down below' since the most often-claimed shortcoming of SET amps is the lack of deep bass response or control with demanding speakers.

"This brings us to damping factor. While important to control more demanding speakers especially if not designed with tube amplifiers in mind, even most experienced audiophiles and SET amp builders are not aware that this is inherently limited on a SET when no feedback is applied or a substantial amount of potential power output isn't sacrificed. Although it's often been used as a rule of thumb, actually optimizing for a given real-world output tube in a SET results in the load impedance which the transformer presents to the tube being around 3 x the tube's anode impedance. That's if we aim at the best compromise between power and distortion. However, that 3 x figure actually means a damping factor of 3 by definition. In real life this is only theory because any additional and inevitable wire resistance in the transformer further lowers the number. Damping factors of 1 to 2 are not uncommon with SET constructions using high plate-impedance tubes.

"In Romy's case, a low plate impedance is one factor in the picture which lessens the total added resistance of the transformer. The other is the use of toroidal transformers. Their advantage is less wire  length than classic types, all other things being equal. Both factors mean less added resistance to begin with. The third factor which determines the net result is negative feedback. Like all self-respecting SET, Romy uses no global feedback at all. The output stage has two strictly local methods of applied feedback, providing a modest ~7dB. This is not so much to improve linearity of the already very linear tubes but to provide a lower output impedance hence higher damping factor. One added perk of this arrangement pertains to clipping. While the same method would worsen clipping behavior in a regular class A1 SET, it improves it in a class A2 design. 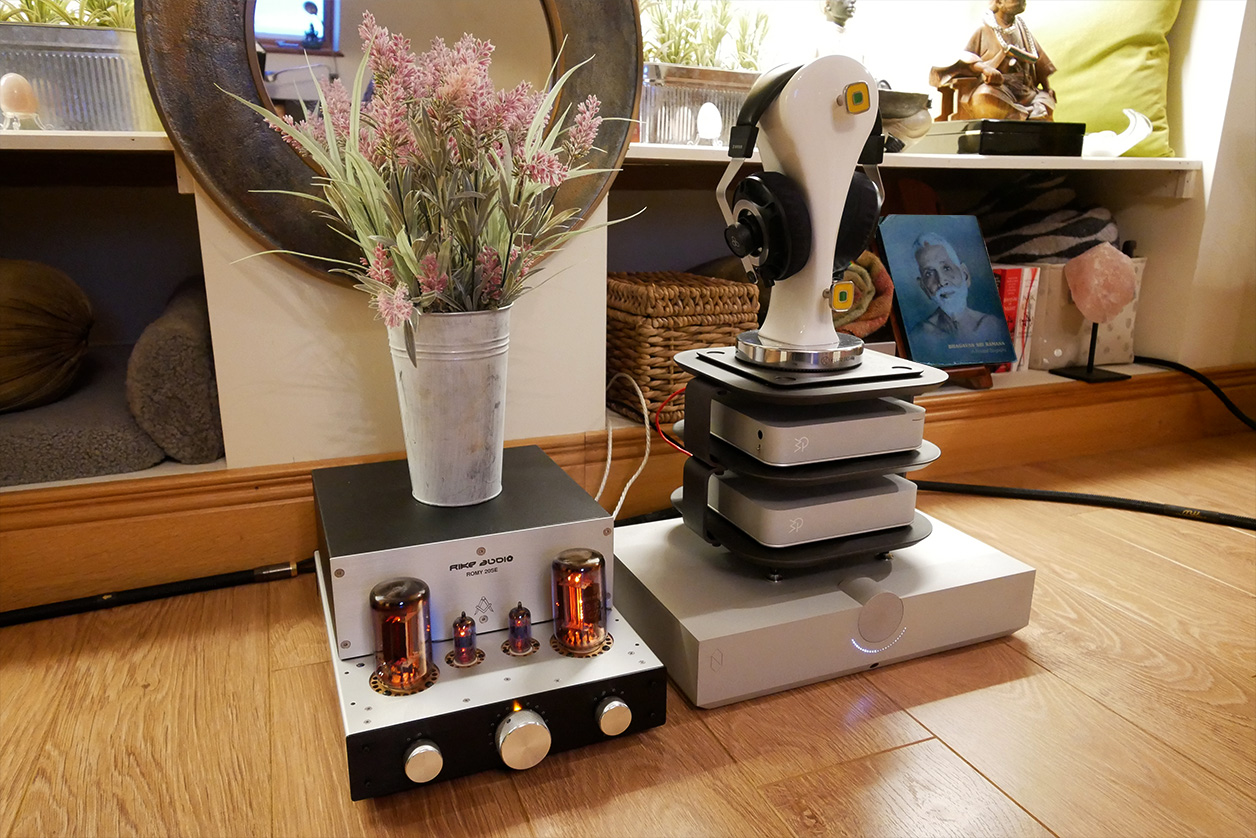 Composite exposure to show what the bulb emissions look like under low ambient light. During the day (the exposure values for anything but the tubes), you'll see very little glow. 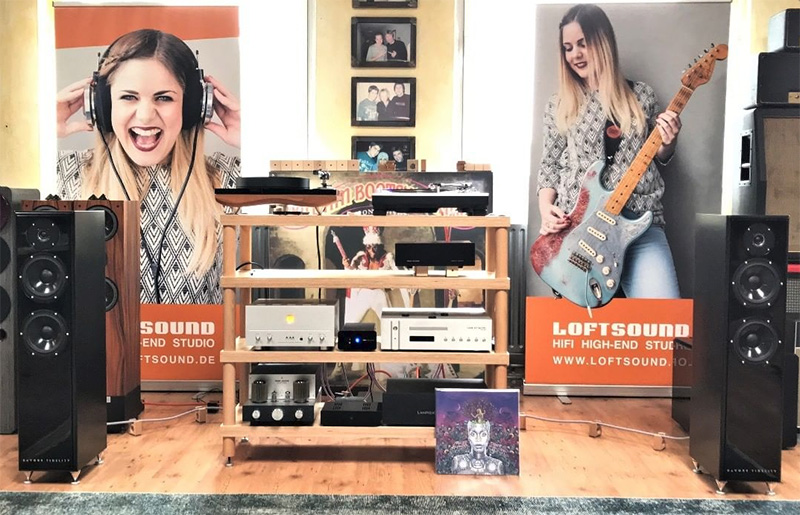 "With regards to damping factor, Romy manages about twice the theoretical number on the 4Ω tap and slightly better on the 8Ω tap. If very high-efficiency speakers are used where the output power may be a bit much for normal listening and a higher damping factor is required, such a speaker rated at 8Ω can be comfortably used on the 4Ω tap to give a damping factor just reaching the teens. All this shows once again that it's a question of getting all the parts to work at operating points where they can provide the most benefit from their specific strengths while avoiding conditions where they would show weakness.

"There are many more details of the design that are not at all obvious and while not divulging our IP, one is the apparent high parts count. A quote credited to Einstein states that things should always be as simple as possible but no simpler than that. When designing a SET amp, 'no simpler' can become a line all too easily crossed. In order to simplify the main amplifier, it proved worthwhile to strategically make the power supplies more complex.

"For instance, the mains transformer is oversized on power but also wound to withstand even long-lasting mains voltage peaks to reduce influence on the sound of the amp. This required a proper soft-start circuit as well as extra measures to prevent the many different power supplies derived from the same transformer from interacting. Another small but significant decision is using several smaller resistors in place of one large one where heat is generated. This distributes the heat more evenly and is less prone to vibration-induced problems. Perhaps a bit ironic given Einstein's quote, 5 out of the total 7 PCB carry various power supply circuits; or circuits to manage them. But that makes possible to have clean power well before it reaches the main board. In fact once the case is completely assembled, the power supplies are in their own separate compartments. Only the very last-stage filter capacitors in the power supplies are on or as close as possible to the main board. This not only keeps all audio signal currents right where they are supposed to be but is also essential when using HF power tubes. If one is not careful with this, they will gladly produce and amplify their own HF!"

If you're curious what type gear a Rike dealer might partner with Romy 20SE, Germany's Loftsound used Gold Note vinyl and digital with DeVore Fidelity speakers whilst their alternate integrated tube amp in the above photo was an AirTight.