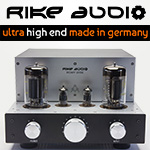 Got milk? How about the whole cow? The path from transformer winder to valve kit maker might be preordained. Think TruLife Audio of Greece, Octave of Germany. With both, 3rd-gen family biz in industrial transformer manufacture developed into tube audio gear which doubled as proof for output transformer excellence. Trafomatic of Serbia led to Trafomatic Audio, Toroidy in Poland to Fezz. There are more such precedents. But what if your core competency were anchored in boutique hifi capacitors? If you're Mundorf, it'd spawn Zendo silver/gold cables; a bespoke air-motion transformer popular with Gryphon and Kaiser; and very busy OEM work assembling crossovers for top speaker brands. 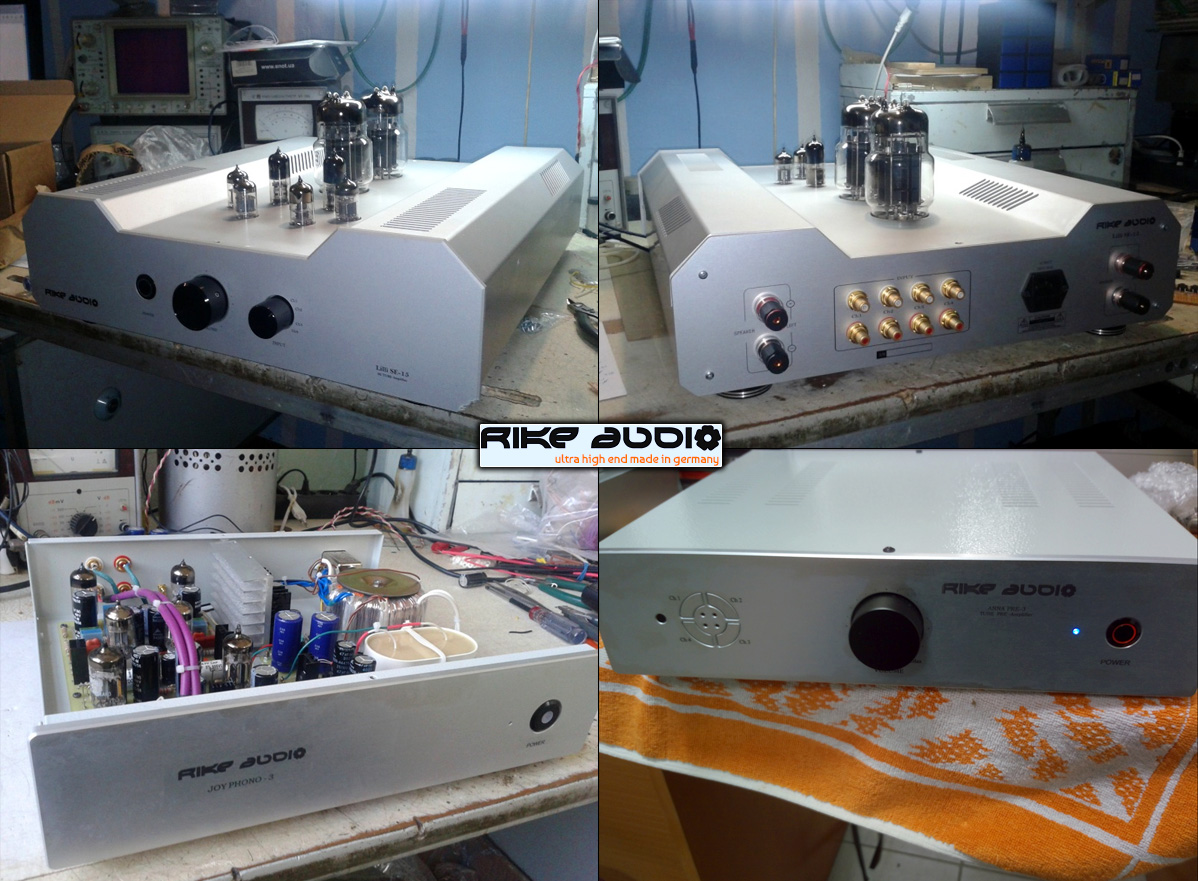 But if you're Georg Arsin of Germany's Rike Audio capacitor brand of Fürth, you take up the first path. You announce multiple MM and MM/MC phono stages, small and big line stages, a push/pull integrated with GU50 pentodes for 25/50wpc of triode/ultralinear power, an EL34/KT88 push/pull integrated of 35wpc ultralinear power and a 16-watt 6C33C integrated. That announcement came down the pike on September 18th, 2016.

A far earlier brutally priced effort in that direction had been spotted in the 2013 Munich HighEnd show's newcomer exhibits. From my report of it, "Georg Arsin of Rike Audio showed off his €380'000 four-piece Edzard amps, total weight 200kg. Whilst chatting with him, Avantgarde Acoustic designer Matthias Ruff stopped by to categorically declare the Rike Audio capacitors the industry's very best; and to express a great desire to hear these statement monos. Matthias is a very clever designer. His unexpected endorsement spoke volumes. These 50-watt SETs run a Siemens/Telefunken 3Cm input, KR Audio 300B driver and KR1610 output triode with special paper-in-oil Rike capacitors, silver output and interstage transformers, novel bias circuitry and a hi-tech material sourced from the Fraunhofer Institute to attenuate parasitic mechanical vibrations (the big black layers). A mono volume control is set into the casing of each output transformer. The power supplies are external. The photo shows how massive those were squatting on the floor next to the display table; plus two capacitor specimens." 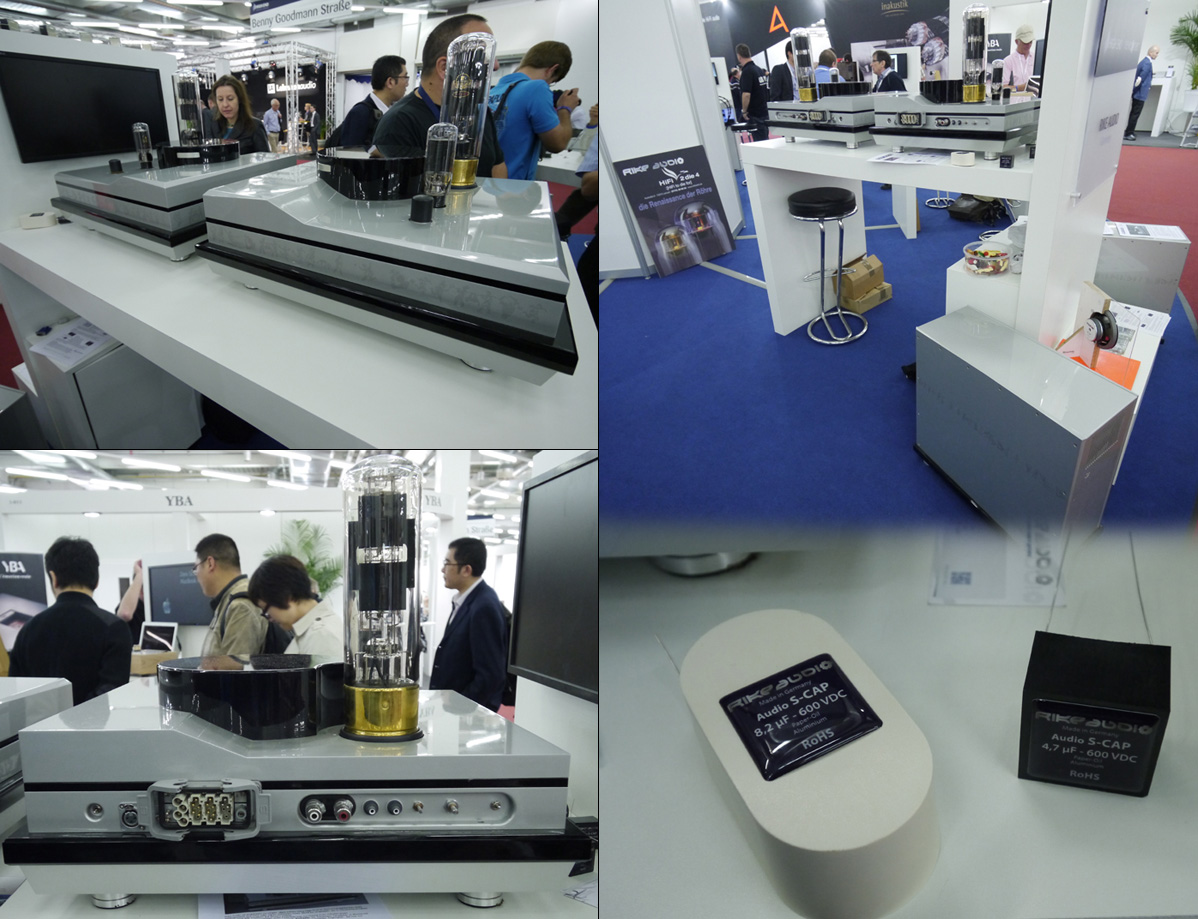 "About the Fraunhofer IFAM Dresden operation, I'd picked up a profile flier to educate myself. They carry out fundamental & applied research to develop new sintered and composite materials as well as cellular metallic materials derived from powder metallurgy. This includes particle and fiber-reinforced materials with tailored properties, nano-structured materials, friction/sliding and high-temperature materials. Doesn't it seem timely that the best of hifi should begin to incorporate the most current hi-tech materials?" Back to the future of Q3 2016,  Rike Audio capacitors had led to Rogue-priced tube components to show off what exactly… capacitors? Far from an obvious demonstrator connection when transistor gear and loudspeakers too use capacitors, I would need an extensive email chat with Georg about his focus on valve kit. Also, how would his slogan 'ultra high end made in Germany' relate?

On December 22nd two years later, I came closer to learning the answer. "We have produced and sold over the last 2 years mainly phono preamplifiers [which, not doing vinyl, left me out – there are the €1'990 Nataljia MM and €2'590 Natalija MC with 4 x 6HM5; and the €5'990 flagship Sabine – Ed]. Now we have finalized one integrated amp and are in development of three different loudspeakers plus three more integrateds, two of them tube, one transistor with a completely new technology to be the world's first." Aha. Transistors. And speakers. Added. "Over the existing single-ended 20wpc triode amp called Romy 20SE, early next year will add a single-ended 15wpc pentode amp, the middle of 2019 a 20wpc push/pull triode amp and by the end of the year, we'll have our unique single-ended 40-watt solid-state variant. When can we start with our planned three reviews?"

Since the best time is always now, that's how I replied. I'd never heard the SRS551 transmitter pentode in the Romy 20SE before; nor listened to any tube amp carrying the Masonic seal.