MIB 4. For coolest agents in the universe, Men in Black with their triangular Hamilton watches, sharp suits, tinted shades and ever bigger guns lead the charade. With its mayhem of explosions, crashes and other obligatory destruction, the 4th installment again tests a small speaker's testes. "Turn it down" purred Ivette like a three-armed vixen when the first carnage kicked off. That's because with ART's TrueBass II choice and Aurora's surprising dynamic reserves, the bombast piled on fast, furious and at triple fortissimo. With its lateral aim, even sitting well off-axis in the right rocker, sonics remained glued to the screen instead of drift across the right window. iFi's dispersion pattern makes for ideal long-couch fun when even the outermost viewers want unskewed sonics. Because built-in gain is high to support elevated peaks at these distances, Aurora and 2-channel home theater come off as far superior than any generic soundbar. The porta notion suggested by the pyramid's "carrying handle" is thus grounded in reality. Aurora moves willingly from one room to the next, from close to the wall to an exposed island stand in the middle of a space to underneath a television. 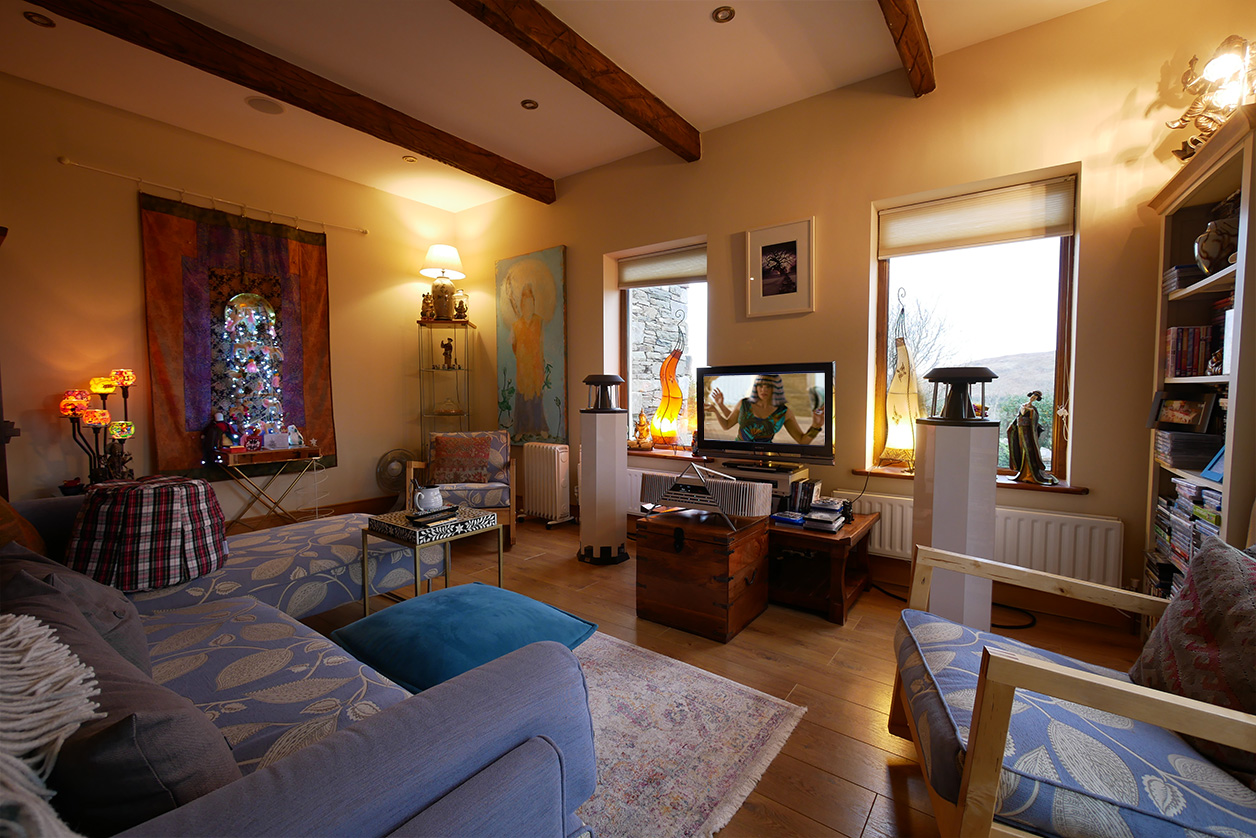 Counting the beans. Writers for tech and gadget blogs who regularly cover the 'sound box' genre are properly placed to take Aurora's pulse against competitors like a Naim Muso 2. Here my regular beat pleads ignorance. We rarely review compact all-in-one systems. The last one was soundgil's $1'500 Cube. It didn't belong anywhere in the same paragraph never mind sentence as Aurora. iFi crushed soundgil on facilities and performance. So I can't give a broad overview on what else the market may hold that can go eye to eye. It's why I had to weigh Aurora's performance against traditional 2-channel separates. Here shoppers piecemeal personal assemblages. It's like buying an engine from Ford, a transmission from Toyota, a chassis from Fiat, the exhaust system from Renault and tyres from Bridgestone. One hopes that it all holds together and up. Styling oneself master over the market's endless choices is simply an essential part of high-end audio's game. It's when its inveterate gamers first encounter a superior active solution like a Genelec, Grimm or Kii speaker that shock sets in. Now they realize that for a lot less coin and in a single stroke, leaving end-to-end optimization to actual engineers can net far superior whilst also far simpler results.

That applies to Aurora. Used at standard not excessive volumes, even coming off bespoke separates will recognize a very special combination of style, smarts and sonic success. That needs no familiarity with the larger genre. Excellence validates itself. The only kinks I met which wireless users won't were shared IR codes. Be it the SD transports or Oppo universal player, certain prompts on the iFi remote triggered unexpected actions on them or vice versa.

Where will Aurora impress? In a bedroom and home office. Anchoring a small 2-channel video system. As the sound system of a mobile home, boat, vacation cottage, hotel room or student den. People with a life beyond audiophilia who live in an inner-city flat with lots of neighbors and limited floor space but who entertain and occasionally party. Aurora's wireless skills have visitors share their smartphone playlists, the hosts stream from their Qobuz or Tidal subscriptions and those iron-impregnated radiators dish out phat beats. Even hard-boiled audiophiles should embrace Aurora as the perfect set'n'forget solution for a second or third room. Optics excluded where Cupertino go for a different style, Aurora could have been designed by Apple for its comprehensively engineered modernity and tech. On second thought, tube voltage gain wouldn't occur to Cupertino's think tank and sonic ambitions wouldn't equal those of Thorsten Loesch. Still, the point is made.

Who would have pegged the iFi Audio brand to author such a machine? Proper recognition must inevitably lead to an award. What should its byline read? 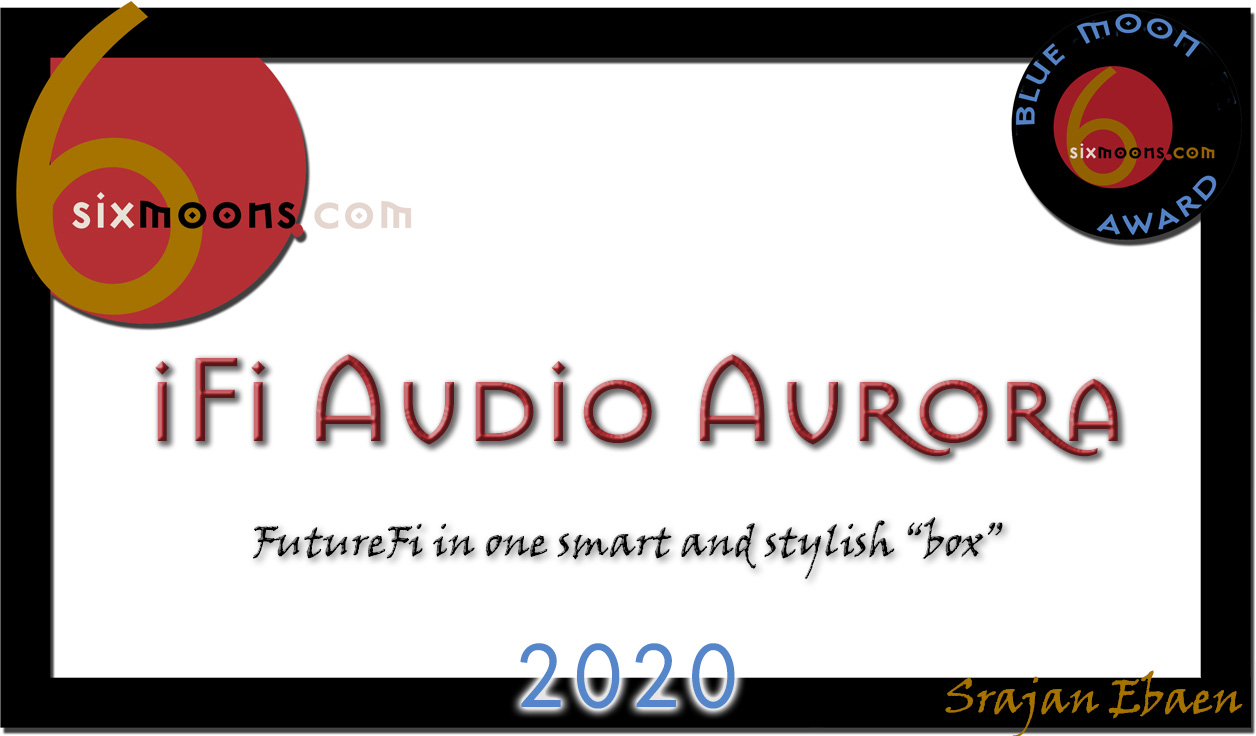 Wireless is the inexorable trend. So is doing more with less. Modern consumers expect comprehensive multi taskers. And style. Most grew up on earbuds and smartphones. Apps are practically hard-coded to their brains. Living with sound now means something else than a dedicated man cave with massive tower speakers, an array of electronics to drive them and a snake pit of cables on elevators to make it all happen. Into the midst of such demands, expectations and budgets, iFi's Aurora lands like a UFO whose existence the masses can agree upon no matter where they see these Northern lights. So what if the audiophile news call them nothing but a "strange atmospheric disturbance", "flock of birds" or "unauthorized drone"?

PS: Just as I put these words down, an email from regular Warsaw contributor Dawid Grzyb arrived. His own Aurora loaner was imminent. Readers keen on triangulating second opinions will soon be able to do so on HifiKnights.com. "After hearing Aurora at two shows and in one room here locally, I already know that this box is a proper music machine. Toyota on the outside, big-block Chevy V8 on the inside. Not a toy. In a way it gives the fat middle finger to many regular rigs out there."