The first thing that must be praised about Aurora is its bass. It's brilliant not just for the breed but brilliant, period. Before you think low riders, boom trucks and ghetto blasters, hit refresh to clear your expectation cache. Type in "articulate, quick, well damped and present into the first octave" instead. That's a total shock. True, if ART calls it TrueBass I but you gratuitously override it with TrueBass III, bass output elevates beyond what's realistic. Still, you miss one-note prison by a country mile. You just play at mastering engineer to pork up the bottom. Nothing wrong with that. It simply doesn't define Aurora. One or two taps on the remote defeat the excess. In a typical setup with Aurora on a low boy or table fronting a wall, TrueBass I is the default. Now the achievable gamut of bass power ranges from audiophile 'I' to strong bass 'II' to club bass 'III'. Why should that rule? Because small systems typically suffer anemia. Lack of true low bass makes them lightweight, thin, tinny and like cardboard. If you know proper sound from a proper hifi, such kit becomes a caricature and bad plastic joke. In those terms, Aurora is a categorically proper hifi.

Let that think in. It's the defining quality and reason to seek out these Northern lights. 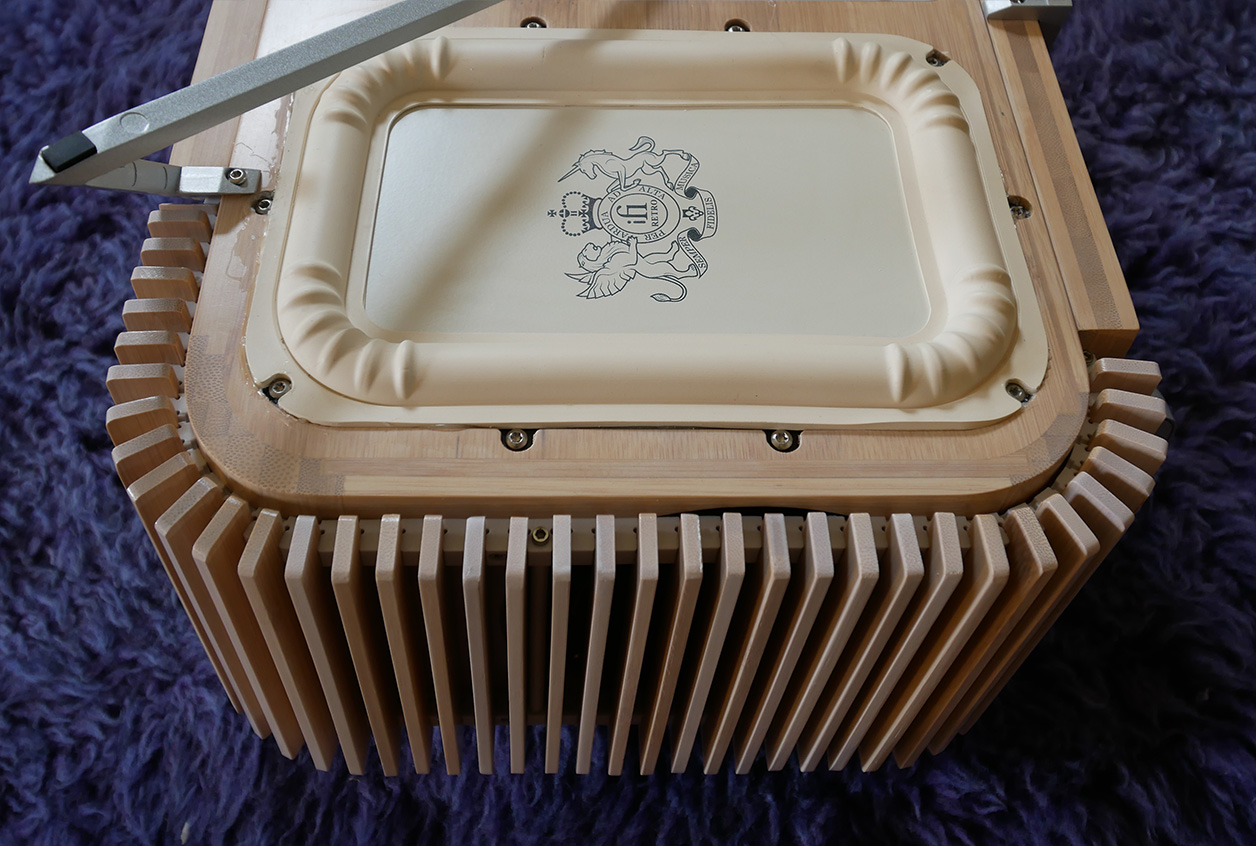 It means a fully mature tonal balance, due weightiness and the type gravitas which floating in space without being deeply rooted in defined low bass just doesn't manage. Add power reserves which in this room never had the volume eclipse 40% even at happy hour. So Aurora presents far bigger and bolder than the most ambitious expectations could reasonably hope for. A most useful extra of its actively EQ'd boundary-loaded bass is that it doesn't vanish at low playback levels. Like dancing cat paws, it remains adroitly in place to mark bass beats far beneath the main action. At real whisper SPL to not wake someone a room over, notch TrueBass up a click. That does wonders for delaying the general winter-is-here mood which accompanies attempts at barely-there levels. Those always wash out and go stark white.

Musical enjoyment just bleeds through walls. It involves co-dwellers or neighbors who may not be in the mood. That's life. Disregarding it is plain rude. Being able to listen quietly without feeling starved or causing noise pollution is key to enjoying any hifi far more often than only when everyone else is out and you can crank it. That Aurora asset shouldn't be underestimated. It exceeds traditional passive speakers which fade sooner even on elite gear.

Astute readers wondered about soundstaging. It's where this concept remains bound by rules of Physics and basic setup limits despite Thorsten's ASP smarts to stretch them like rubber bands. What surprises instantly is unexpected depth. Rather than a shadow play's 2D of outlines cast against a translucent sheet, there's a good semblance of the 3rd dimension. It's just not as specific and layered as a free-space speaker system will cast though more developed than in-wall speakers. For me, its general size occupied a sound bubble about 1 – 1.3m in diameter. The occasional out-of-phase effect showed up still farther to the sides. So the sound cloud was far bigger than the fire beneath causing it but significantly smaller than the corner-to-corner spread which our black speakers manage in the same room. Inherent in the concept of the fancy wireless table-top radio thus is a more diffusive far smaller soundstage hovering well above it. This segues neatly into a brief riff on a typical listener's evolution. 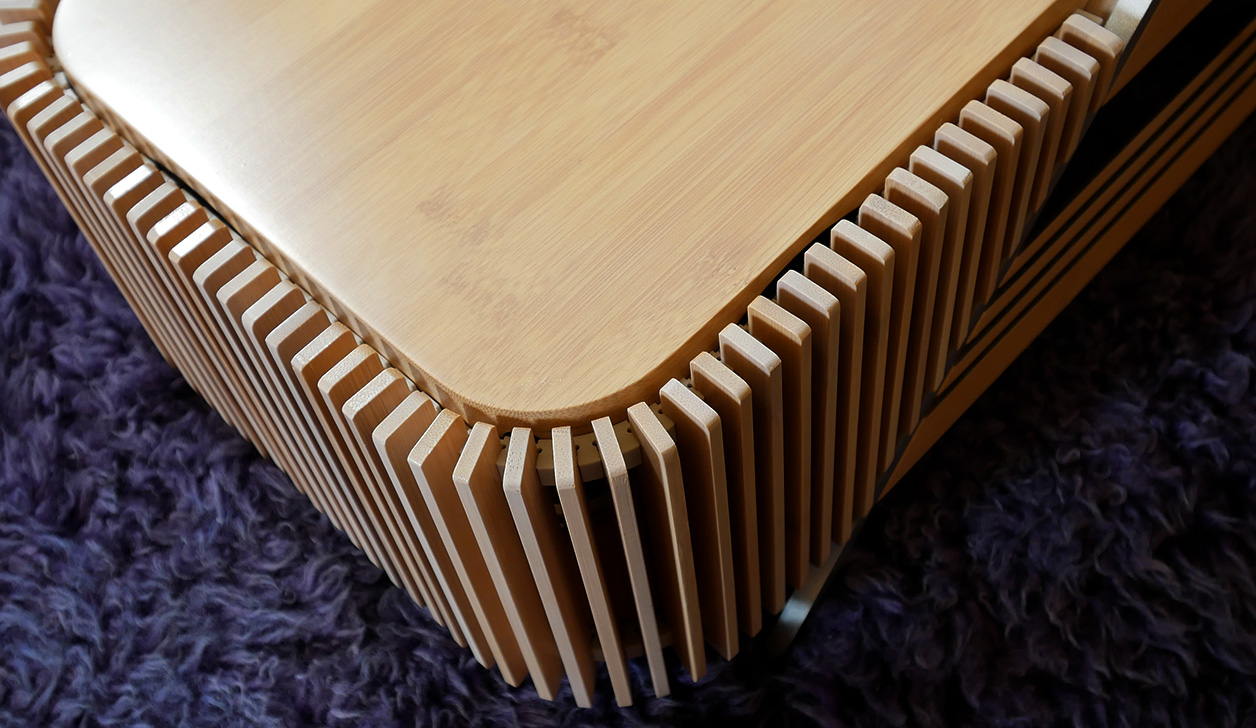 In 2020, it's bound to start out with wireless ear buds. From there it likely progresses to whatever one's very first car has for a stereo. Neither earbuds nor automotive do any real soundstaging unless you're the exception who starts on a Raal Requisite SR1a ribbon headphone and BMW-caliber wheels with bespoke 7-channel hifi. So in general, people get exposed to sound then develop their music listening habit when

soundstaging is of no concern at all or even markedly present. Soundstaging only begins to intrude when audiophilia commences with its review reading; when seeking out quality dealers or shows follows; when the assembling of a quality speaker system grows into an earnest pursuit. If you've moved well along that line already, on soundstaging Aurora will move you back to just between an ordinary car stereo and your first set of budget boxes. If you're still between ear buds and a rusty Honda Civic stock stereo, Aurora moves you up that line. Again, that's relative only to very specific mapping of images in three-dimensional space. On tonal fullness, scale and fully developed very articulate bass power/definition, Aurora moves you well beyond including many a budget, even far from budget passive monitor.

The only relevant competition comes from active speakers like, in Aurora's price range, a KEF LSX wireless or standard LS50; or our resident €1'450/pr Swiss Feniks Audio Essence. As two discrete chassis, those are obviously free to separate. That automatically moves the outer markers of the virtual stage outward to win on sheer size by default. But what if placement dictates a setup no wider than Aurora? How would a pair of active speakers compete now? To find out, I set up up first Aurora then Essence in a scenario I consider ideal: at the foot of a bed. Doesn't the notion of tunes whilst being propped up on a plush pillow on a lazy Saturday then Sunday morning sound like the sweetest of decadent luxuries? From there you might even beschall—that's German for 'drench in sound'—the master bath whilst soaking in bubbles. Either way, here nothing bigger or costlier than Aurora is called for nor would it be appropriate in the first place for a smaller room that's not been cleared out and converted into a dedicated listening lounge.