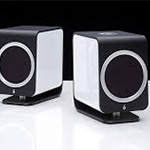 No contest! With its front-panel ART symbol held for 3 seconds, Aurora entered audiophile mode. Now the same symbol on the remote toggled between SoundSpace on/off. TrueBass could toggle between its three potencies. If we think of ART as Way–Deep DSD where somewhat amorphous dimensionality and softness are concerned, drier audiophile mode without SoundSpace approached PCM. It stripped out some reverb blur and focused down/separated out more sharply whilst relinquishing a bit of depth.

If I meant to indulge my inner audiophile freak on familiar purist fare, I'd defeat SoundSpace for the occasion to be "most similar" in basic feel to our big speaker systems. If I forgot the inner audiophile to just enjoy Aurora's wizardry on its own merit, I'd stick to ART. Either way, on scale, dynamics, body and bass reach/power, Aurora decimated our leaner thinner smaller 4.5" all-metal coaxials on the very same S/PDIF feed. Under the width restriction imposed by the wooden console, those tidy Swiss didn't really soundstage any wider either. This was a hands-down very dominant win for the Chino Brits. Crushed. No sour grapes. 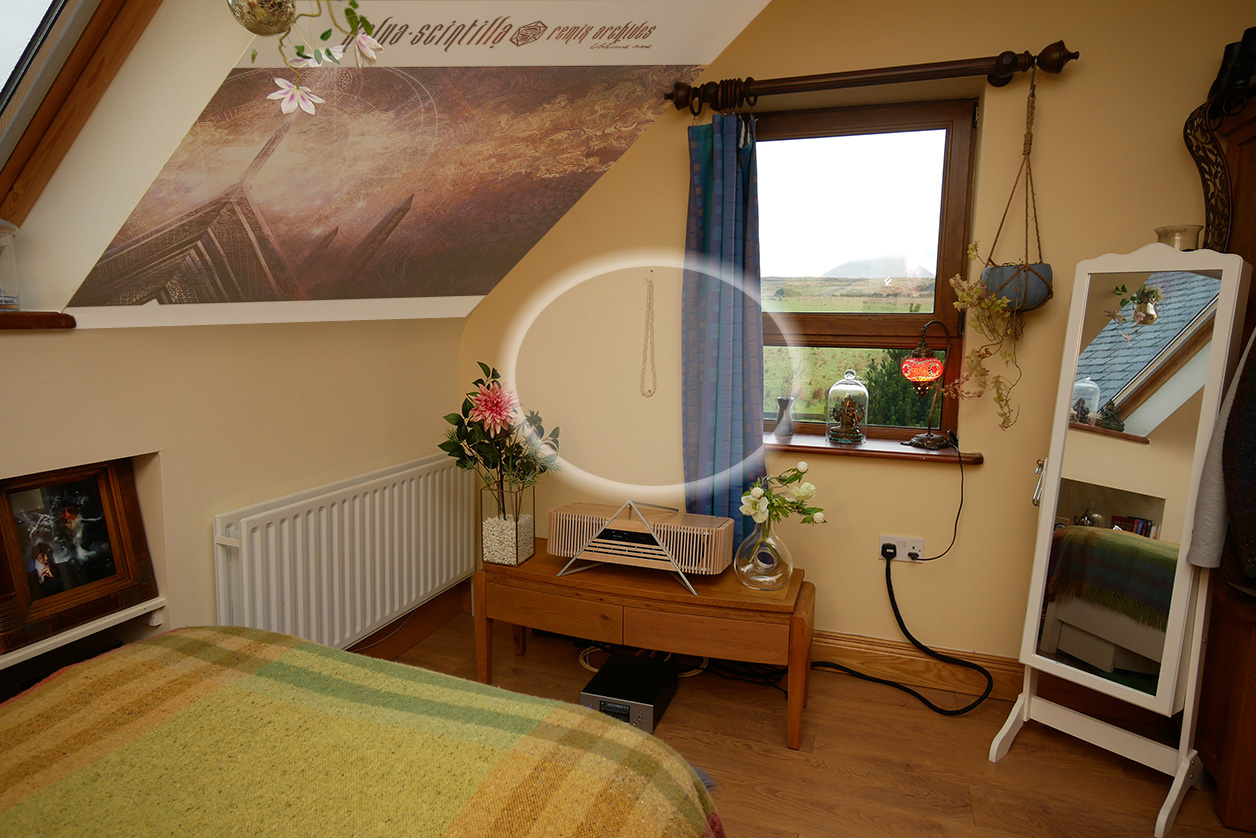 To demonstrate Aurora's generosity and dynamic balls, grab Kalya Scintilla's Remix Archives, Vol.1 album. Pick "Lotus Heart". Go heavy on the throttle. Still, there's no way you'll hear what I heard whilst reading and listening even over a posh desktop setup. I don't know what music officials call such fare. I think of it as tribal groove dub. Here it's well-mastered electronica with enhanced digderidoo and many synth sounds that often show up in the very low registers.

Aurora's slammage (is that even a word?) completely annihilated what my eyes and prior experience thought dimensions and driver artillery could possibly do. Unless heard in person, especially hardened audiophiles won't believe what this bamboo slattern is capable of on these counts. Sitting on the bed against the far wall, the sonic bubble completely covered the bone mala next to the blue curtain to float well above the box tilted on its tripod. In this setup, more hardware would not only be silly overkill and a waste of money. It'd be very hard pressed to compete on sonics. And who would tolerate towers of power obscuring the view staring down on the bed?

Before we follow Aurora into a few more domestic landing spots to explore further usage, one aspect must be underlined lest it get short shrift. That is the active studio monitor paradigm which audiophiles love to hate. Think powered by conventional class D for super-linear response, ultra-low distortion, capable of playing stupid loud yet strangely stark, aloof and emotionally uninvolving. That's exactly what Aurora's recipe of triode voltage gain plus ultra-fast switching current multiplier recipe is not.

With its 3kHz+ band softer, more diffusive and less crisply detailed than standard two-ways; with nether regions shockingly potent and fully developed; with a midband richly hued, dynamic and chunky; with transients slightly soft – Aurora is voiced for unrepentant pleasure seekers. What the concept gives up in audiophile-type image specificity, layering and soundstage size when compared to traditional speaker systems—a Quixotic comparison but that's what readers are most familiar with—it repays in pure satisfaction and tonal sophistication. That spells F.U.N. and includes the unexpected ability to really boogie. It's why I recommended Aurora over Aarka to a friend seeking a system for a new office. At $4'750/pr sans DAC, streamer, ART, app or IR remote, the active Rethm takes up far more space, needs extra kit and cables and, except for bigger more specific soundstaging when separated far apart, wouldn't buy extra sonics but lack Aurora's advanced adaptive features so just cost more. As I told Dan, to get any work done, I personally don't want a desktop/office system to distract me with spectacular detail and staging. But I don't want elevator muzak either. In the office just like at the foot of a bed, Aurora's big-rig tone and bottom-up balance from minimal real estate would tick off all my boxes, do so to perfection and with the least amount of fuss but with the most flexibility to respond to mood and music changes with a few clicks on the remote. Stealth mode even shuts off all the white lights and only leaves the orange tube glow. 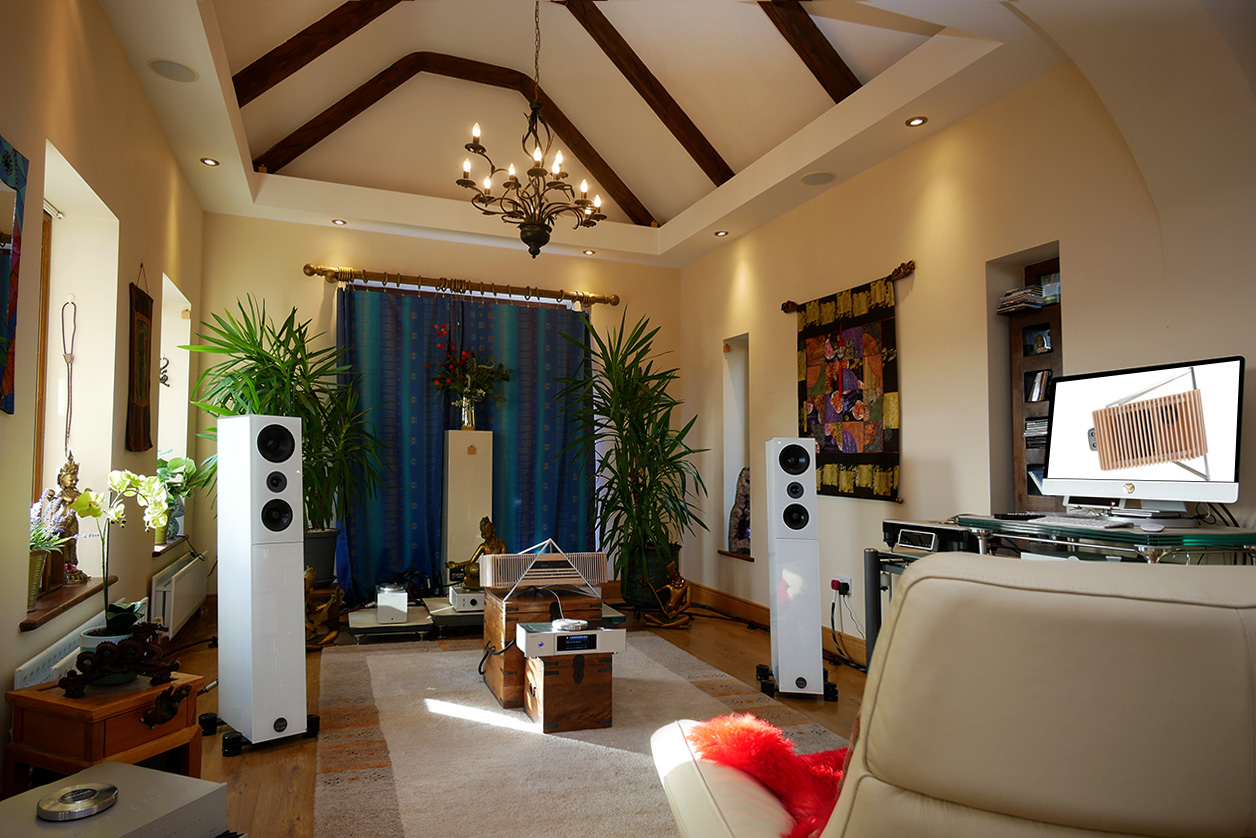 In one episode of Absaroka County television sherrif Longmire, unscrupulous hunters and a Sino crime lord shoot deer out of the season to harvest antlers for their untested cancer cure called velveteen. Like other miracle cures—baldness pills, wrinkle creams, magic fat burners, breast firmers, cock enlargers—it's shady. Aiming at big C's desperate people, it's also ultra dear. All this flashed up to memory when Aurora landed in the middle of our main room. Ivette walked by and exclaimed "that's amazing, like velvet". Indeed. Claude Chalhoub's Stradivarus-led massed strings were smooth as silk. Unlike Longmire's velveteen, this velvet wasn't shady, overpriced or vaporous of substance.

True, few would set up Aurora in free space. And why should they? It defeats the whole concept of getting big nearly invisible sound from out of the way. Yet it works in ways which beggar belief. So you very much can – go there. For me soundstage expanded to full curtain width, depth rolled out to the front wall. Height slightly eclipsed the Zu subwoofer. Even surrounded by this much space, ART set itself to TrueBass II. That left one spare gear for party time. Now I realized that I hadn't really heard Aurora in full bloom until this unreasonable experiment. Given proper breathing room like a posh big system, soundstage scaled up in lockstep whilst its textures and focus remained more diffuse. But damn, this approached the impossible.

With a €24'000 Gryphon Ethos CD player, €17'000 Vinnie Rossi L2 Signature DHT preamp, €8'500 LinnenberG Liszt monos and €11'000/pr Audio Physic Codex speakers benched for the duration, I didn't say that lightly. Costing 1/40th by contrast, Aurora performed outrageously well. Want maximum depth? Give Aurora two meters to the front wall. Cosmetically it's daft. Sonically it's deft. And I still didn't manage to exceed 60% of possible output when things got rather loud. How would this surprise ability translate to video by becoming a television's sound system?