Ohmega. ART aka automatic room tailoring can be defeated. Then Aurora operates in 'audiophile' mode. Now its SoundSpace matrix and TrueBass analog EQ are individually selectable not auto set and assigned. It gives curious or fiddly listeners a chance to explore each feature—TrueBass has three different settings—and dial them to taste or defeat one, the other or both. Perhaps compare that to what ART decided on to insure that your settings are better? But then, grown men never ask for directions. 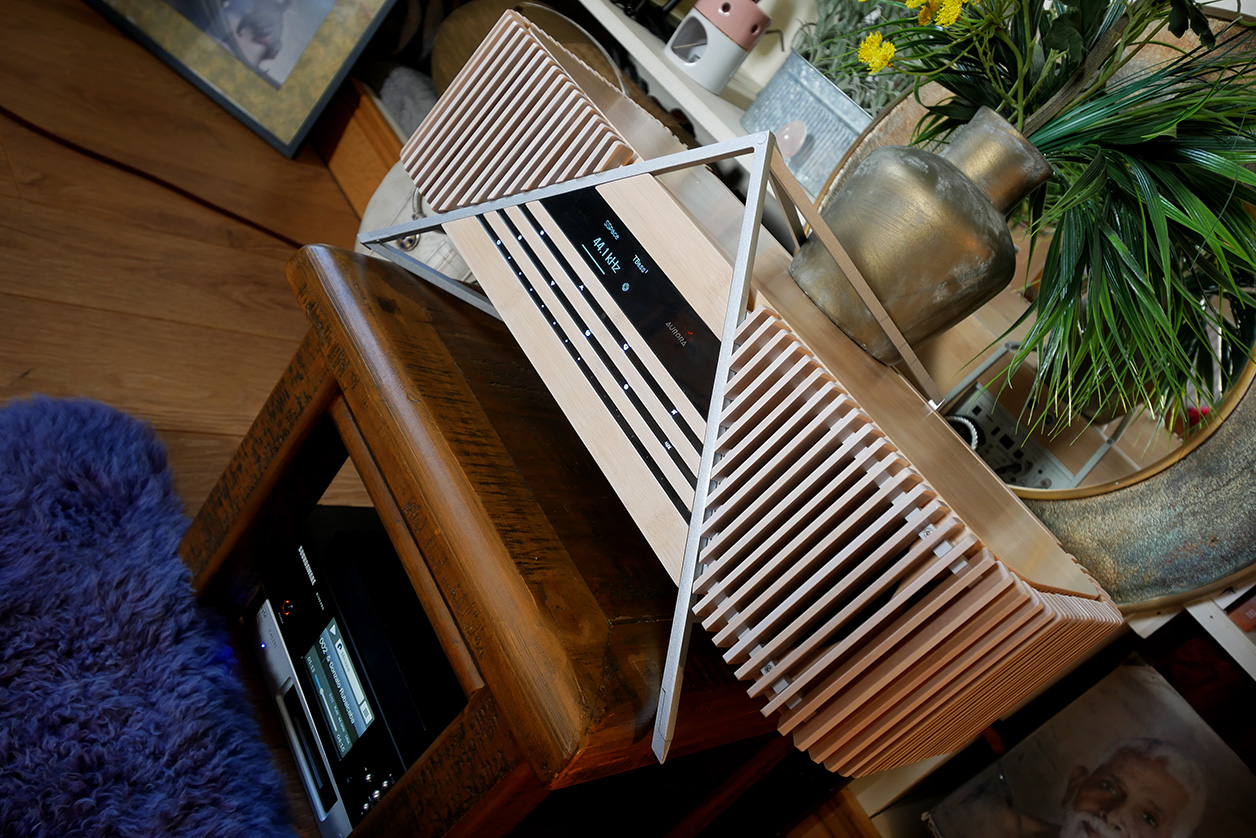 Volume is controlled by remote, app or by finger slide along the lowest of the three touch-screen channels. Inputs are selectable one channel up and identified by obvious symbols. So are the lighting, ART, TrueBass and mute 'buttons' of the uppermost channel. Layout and operation are so intuitive that granny could light up Aurora and make it sing. In my ~4x6m upstairs room, iFi displaced our usual €6'000 Bakoon AMP-13R, a stunning 25wpc variable amplifier which drives these black all-aluminium Acelec Model One monitors. Even in TrueBass 1 mode, Aurora instantly thumped the Dutch on raw reach. In TrueBass 3, it gained so much output as to be set aside for techno chicanery played at 11:00 on disco Tuesday; or to compensate for whisper sessions when low bass is always first to disappear. 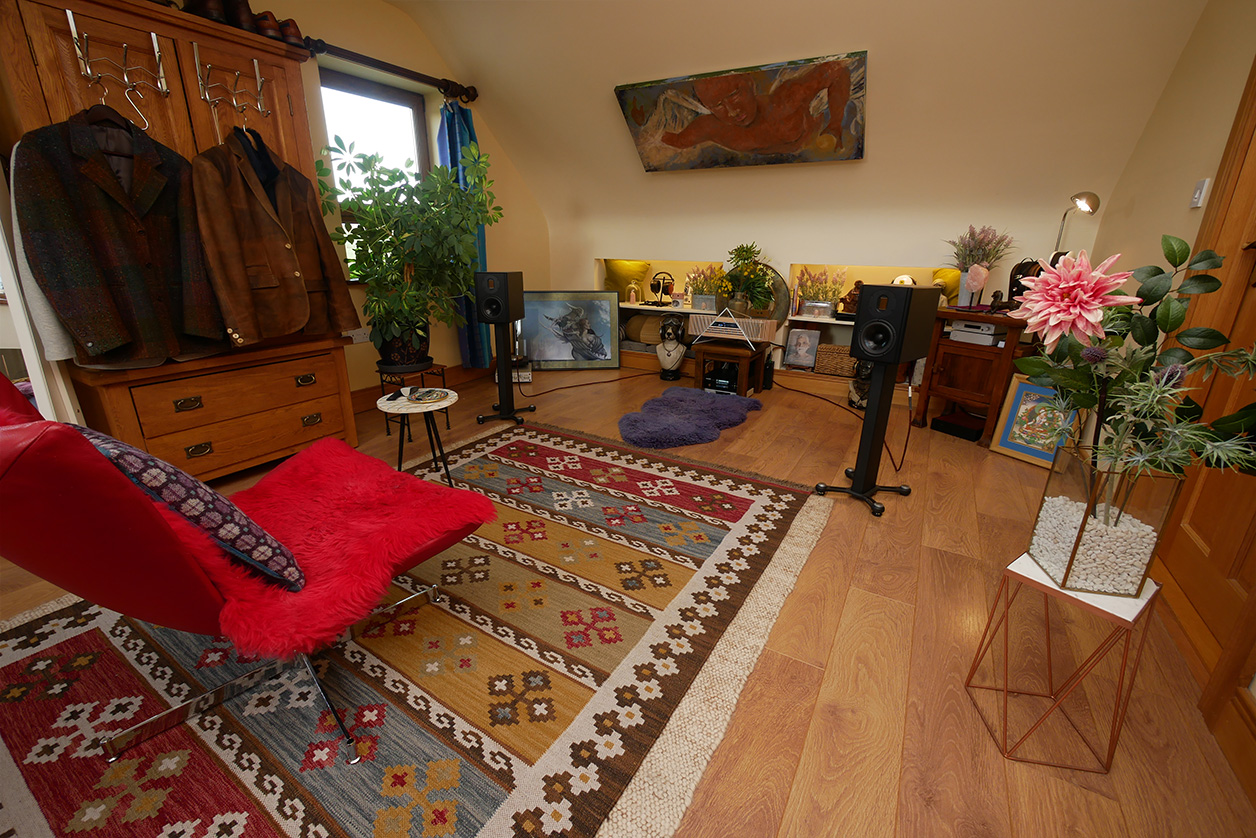 It took less than half an Anna Marie Jopek track off Minione to realize that Aurora was dead serious indeed and evolutionarily to a standard clock radio what a dolphin is to an amoeba. Duly impressed and just a bit rattled, it was time to explore various setup options, get familiar, determine a favorite, report the differences, then attempt to create competitive context by comparing Aurora to… well, what, really? 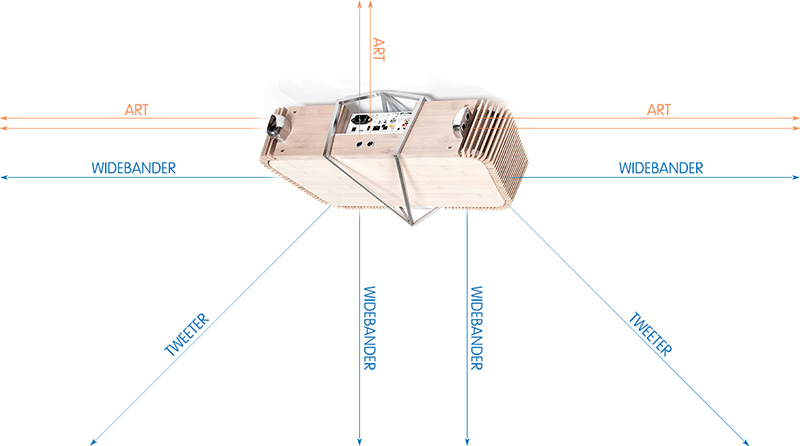 Actually, I had just the thing.

But first, think on ART. By ultrasound, Aurora measures its place within your room. It knows how far from the front wall it is which determines boundary gain for bass.

It also knows how far each side wall is. Those values determine how much time delay each side-firing driver incurs relative to the front ones.

Presumably this calculates strategic delay for the fronts to synchronize time arrival between all four main drivers at your ears. That would minimize diffusion and sharpen image localization.

Without its lateral drivers, Aurora's soundstage width would be limited to the ~37cm distance between its front drivers; not exactly mono but a far cry from the 2-4 meters which conventional speaker setups create.

HF content embedded in transients helps our ears 'see' where exactly sounds arise. Aurora's tweeters turn out 45° to miss our ears with direct sound. That makes them ineffective at image localization mapping. But unlike normal midranges which cross out at 2kHz, Aurora runs special widebanders to 8kHz. We receive localization cues directly from the front and reflected from the sidewalls. So iFi's tweeters are just quasi-omni super tweeters in the very top octave. Their in-fill of air and sheen is diffusive or ambient by nature. Meanwhile the passive radiators operate exclusively across wavelengths which regardless of aim disperse in all directions. Being immediately loaded by whatever surface Aurora stands on simply increases their pressurization and gain. How much iFi's analog steering matrix called SoundSpace exploits phase trickery and crossfeed—whether indeed it does—is part of their secret sauce. Syncing these widebanders in the time domain simply seems part of it. My drawing obviously simplifies widebander radiation. It doesn't show 'beam width' or actual off-axis dispersion. If the lateral units operated as pin-point narrow as the arrows suggests, they'd bounce endlessy between wall and themselves. We'd hear very little of them. The drawing only indicates that the side drivers hit the side walls before they reflect towards us.

Prior to listening, thinking on this driver array and how it plays the room tells us not to expect the ultra-specific image lock across anywhere near the same width as our black speakers create which represent conventional monitors in free space. Between 60 and 8'000Hz, Aurora mixes direct and reflected sound. Even a delay on the front drivers has to sound more diffuse than typical direct radiators. By the same token, Aurora is bound to behave far more 'out of the box' than other all-in-ones of equal width whose drivers only aim forward. Where between the polarities of 'laser-guided' direct sound and 'quasi omni' diffuse sound would Aurora fall? How much of a say would engaging/defeating ART have in that?