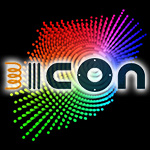 Sub sandwich perfected? "A submarine sandwich—also known as sub, hoagie, torpedo, hero, Italian or grinder—is a cold or hot sandwich made from a cylindrical bread roll split lengthwise then filled with meats, cheeses, vegetables and condiments." We're no foodie channel so our sub sandwich involves a subwoofer. To perfect its integration with the main speakers, it too does the splits, just not with a bread roll but frequencies. Those which hit the subwoofer are filtered via a low pass (that which lets the lows pass). Those which hit the speakers filter out bass via inverse high pass. In the multi-channel home theater space, preamp/processors include all the necessary bass management facilities. They may even include finely calibrated digital delay to compensate for a sub's time alignment if it doesn't sit equidistant with the speakers or suffers DSP-based latency. Now the signal to the mains gets delayed to insure that their sound arrives at our ears simultaneously with the sub's. After all, late bass is slow bass. Nobody should want that. In the refined 2-channel space, preamplifiers simply don't do any of it. At best they offer dual pre-outs. Those condemn us to augmentation or 'tack-on' mode. It's when both speakers and sub see the same full-range signal. That going to the sub gets cut by the sub's built-in low pass which is often preceded by an A/D converter. It's usually adjustable between 40-120Hz but in certain cases could span 25Hz to 200Hz. 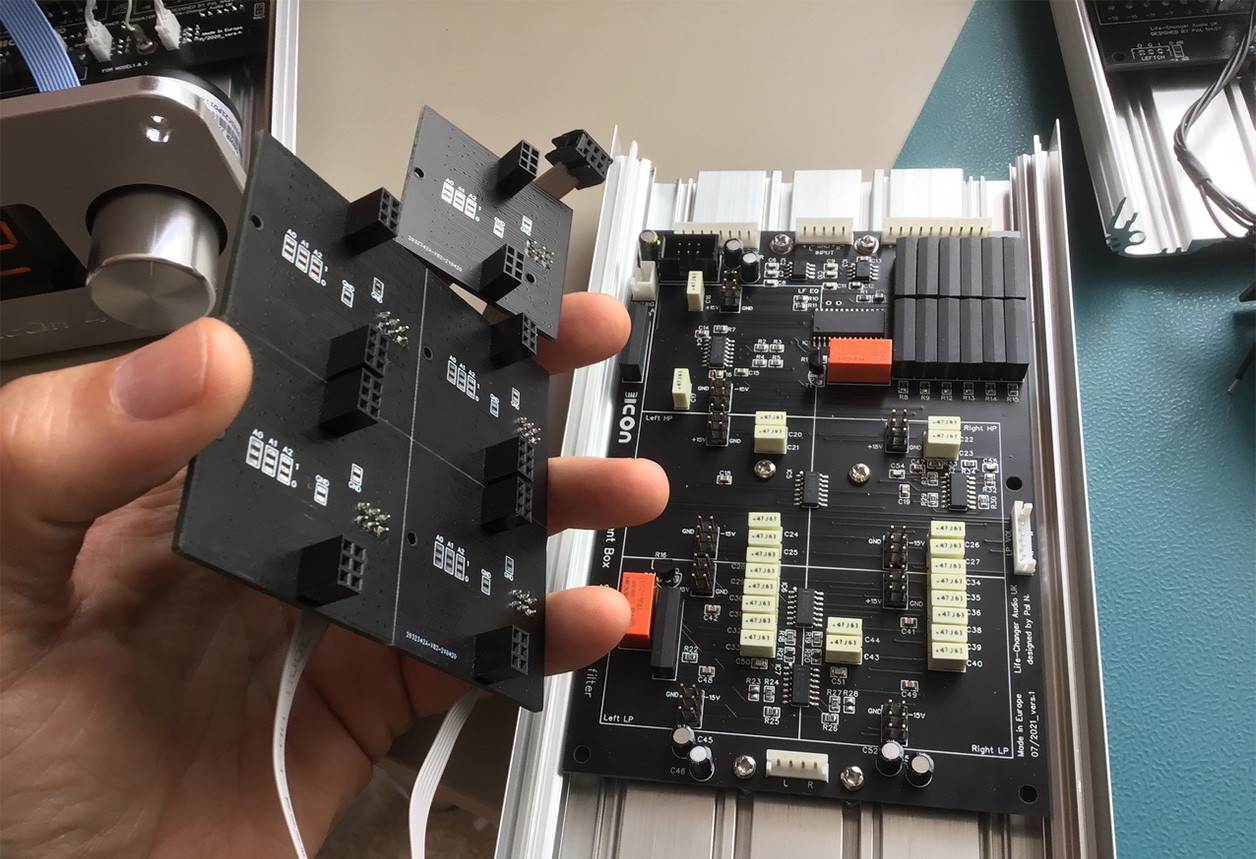 Either way, the intrepid user attempts to set this low pass so the sub rolls in where the speakers roll out. In dim man caves, there's much secret crossing of fingers, hoping for miracles and sweating over proper phase to avoid a suck-out at the handover and achieve a seamless patch. In the worst case, it's like vintage hippie jeans lengthened at the hem with a flowery band. Colorful such upcycled pantalones may have been but of one piece they never were. You can hear that the bass is tacked on and not part of the original fabric. It's not fully integrated.

A better tailor filters also the speakers and perfectly mirror-images the seam to the sub. He applies identical attenuation slopes at one frequency hinge so neither sub nor speakers see any full-range signal. If done in the analog domain, this neatly avoids digital latency from heavy DSP processing. Dual-filter mode becomes a compound win. We gain not just lower louder bass. We reduce bass stress on the main amp which can be smaller/cheaper or better because we're not chasing max power. We reduce stress on the speakers whose excursions diminish for lower distortion. That creates less heat on their lower voice coils so their impedance doesn't rise to become more resistant and choke dynamic range. About this, subbists of the REL persuasion who promote a high-level speaker connection know nothing. They still run their speakers full-range. Nothing there changes. They're just doing stereo 2.1. They don't convert a 2-way into a proper 3-way with active bass¹. Remember that in 2-way monitors, bass and midrange share the same cone. That meets a 1" dome at usually ~2kHz. Relieving the bigger driver of low bass runs it at lower distortion with better dynamics. These gains extend across its entire bandwidth so all the way up to the tweeter. It's no marginal win. It goes well beyond just more bass. Working smarter not harder, the work which the monitor's mid/woofers perform increases in quality and sophistication. Who doesn't want better employees?
_______________________________________

¹ Obviously if you start out with a 3-way, you now convert it into a 4-way and so forth. Once speakers hit -3dB at 45Hz or lower, it becomes harder and harder to successfully tack on a subwoofer without unwanted overlap. The most common low-pass filter built into a subwoofer is a 4th-order Linkwitz-Riley. That defines by its -6dB point. If the lowest settable value is 40Hz or 50Hz, for such speakers that's already too high. 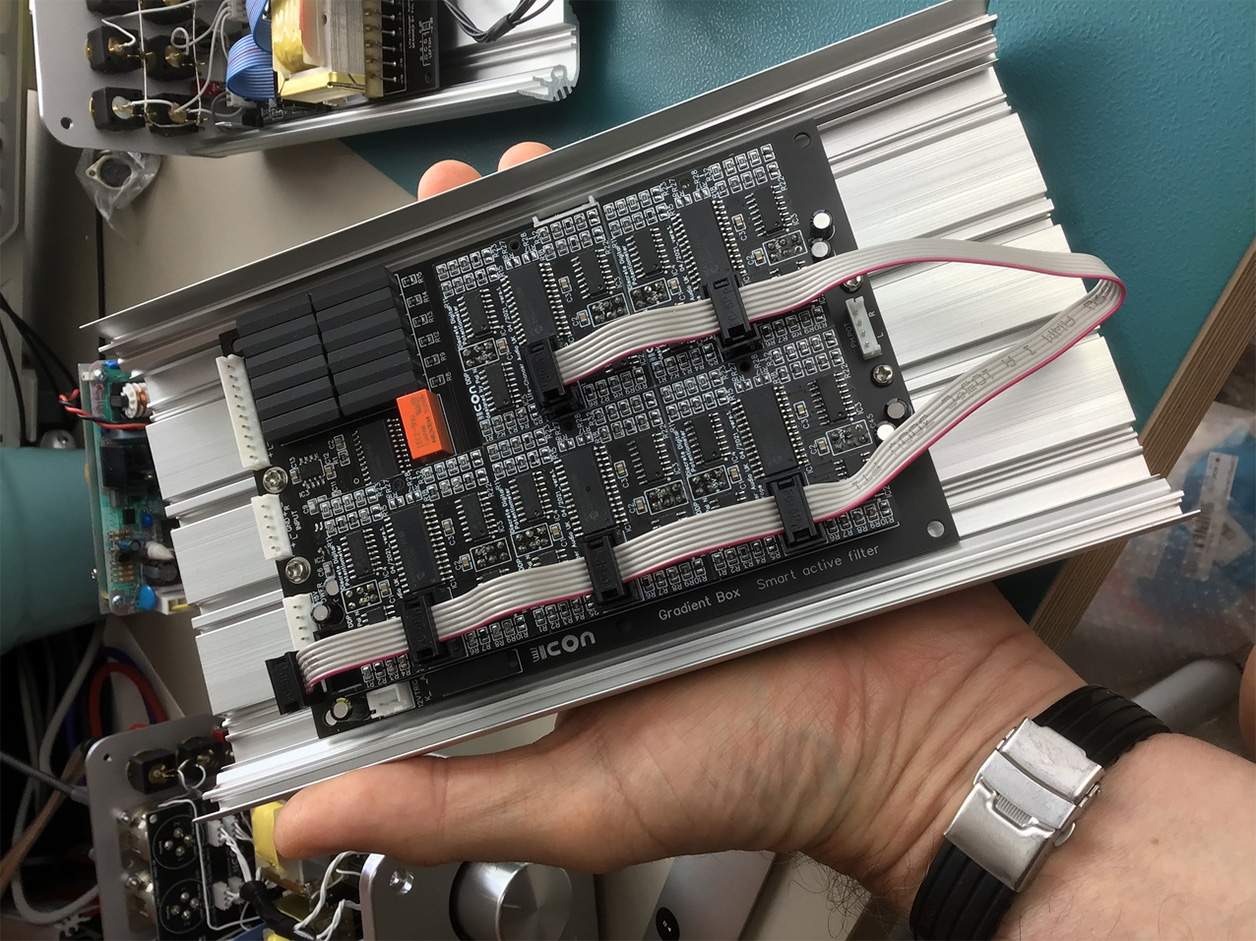 If you're now having an inverted When Harry met Sally moment—"I have what he's having"—you'll feel buggered. How to manage an active high pass when your purist high-end preamp plays snobbist to forget all about possible subwoofer users? Return to the generic sandwich. It was popularized in 1762's England by one John Montagu, 4th Earl of Sandwich. Legend has it that our fellow suffered a substantial gambling problem to spend hours on end at the card table. When he began to order two slices of bread with a slab of beef in the middle to munch on while gambling, his companions began asking for what Sandwich was having. The rest is his-tory. More than three centuries later, subwoofer fans not wishing to gamble on augmentation mode can once again count on Great Britain to lead the way. Here Hungarian expat Pál Nagy of icOn 4Pro fame is designing more than mere condiment for our perfect sub sandwich. Somewhere in Manchester, he's putting together the whole stuffed shebang. Now you'll wonder what our audiophile version is of a hoagie's wet fill of roast beef, pickled onions, melted cheese and relish.