By June 14th, "my second attempt at the multi-frequency subwoofer xover board is nearly ready for ordering. This is the Linkwitz-Riley 4th-order active filter with seven switchable corner frequencies at 40, 60, 70, 80, 90, 100 + 120Hz. Learning from my mistakes of last year's circuits with nearly one hundred MCU-controlled analog switches, this board is purely analog with traditional switches. There's no MCU but still remote-controlled setup with some limitations. Given today's supply disruptions and parts shortages, designers must fall back on clever tricks to not wait on unobtainium chips. I expect that for most users, initial setup will take maximally ½ hour. An OLED display with menu, Apple remote and several dozen chips is far from Einstein's 'as simple as possible' maxim. Yet the much simplified Gradient Box will still offer A/B comparisons between any two crossover points, EQ and phase but do so with an old-school wired remote." That would neatly circumvent the need for a microprocessor, eliminate its potential for sonic intrusion and simply unplug when no longer needed. 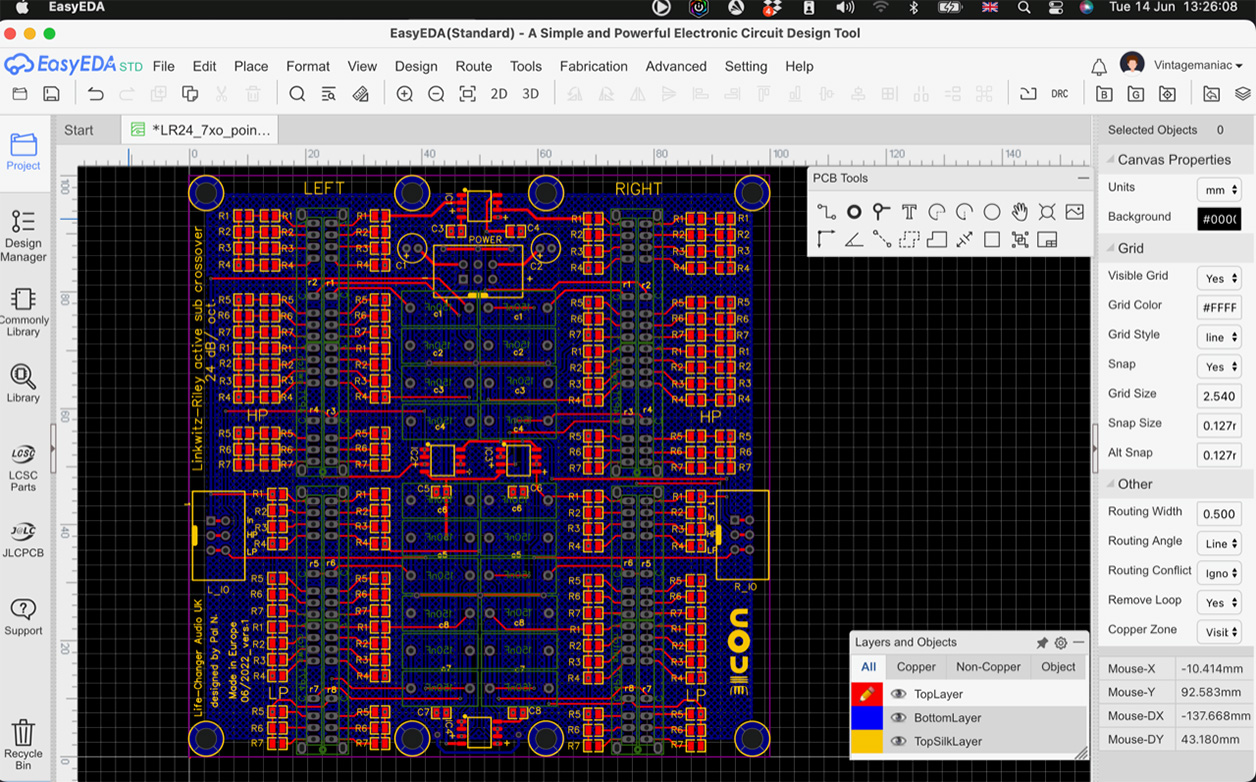 "The second PCB will contain the i/o sockets (XLR+RCA in, RCA LP out, XLR+RCA HP out), sub-level adjustment, LP EQ/boost, phase switching and some relays for the cable remote. A sub gain of +20dB as I've been asked for is impossible with op amps but I believe that +6/-10dB will be sufficient gain matching between sub and main amps. If my simplified concept works well, I'm not sure that I'd return to my overly complicated first design." Having been copied on this group email, I asked Pál whether a narrow version of his resistive attenuator built as a balance control couldn't neatly address potentially badly mismatched gain between a client's sub and speaker feeds. Turning this balance control left would attenuate the low pass, turning it right the high pass. Center would equal bypass. A client should never want to fix insufficient amplifier gain with a smart crossover. Rather it's a bit of excess gain which one leg has over the other. If this balance control complicated things too much again, it'd be a mistake of course. I was hesitant to even mention it. From the other recipients on the group email, I got a clear sense that timing was of the essence. They wanted this solution soon to bundle with products they promote. The sound|kaos Munich demo had lit some fires. Feeding not starving them was the business now. No pressure, Pál. As Martin summarized, "we had a very good show considering the preceding 3-year hiatus. Most people seemed glad to be out and about again. The main interest was on the Ripol sub. You may not have set the world alight with your writings but with 12+ enquiries and discussions relating directly to your articles from people as far afield as the US and New Zealand, that wasn't something I experienced before. To boot, all walked away convinced that it's the way forward." No pressure at all! 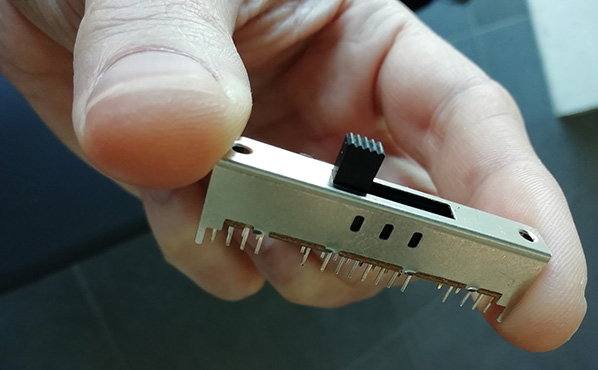 "Thanks for the balance control suggestion. I think that's a very useful part of the JL Audio CR1. I don't use pots and without an MCU I thought I should pass on it. Until today I was most committed to stay MCU free and go purely analogue to keep things as simple as possible. Then I realized that a lack of processor dumbs down the design too much, makes it more expensive and my life more miserable. So the processor is back with the usual IR remote (a nice cable remote would be way more expensive) but no OLED display or other fancy stuff. Due to time pressures, the current version will stick to only basic relay-controlled features but will have headers for an add-on board with a 'fancy' 0.5dB-step non-AVC remote-controlled volume and sub/sat balance. Without microprocessor of course this wouldn't be possible."

Following our man's thinking-out-loud process whilst navigating parts shortages and scheduling pressures gives you a sense of the many battles being constantly fought behind any such scenes. It also points at a number of likely reasons why until now a device with this functionality wasn't available.

"Perhaps a remote with customized laser engraving will ultimately be the most user-friendly solution with dedicated function buttons. The simple time-sensitive version however will get tiny LED indicators instead. The fully loaded version with sub/sat balance and volume will have a display. sound|kaos will design a wood enclosure for theirs, I'll keep my standard icOn casing. The frequency adjusters won't be rotary but sliding inline switches with four slots. This is far more convenient than changing small resistor boards inside. I use four 28-contact switches plus a dozen reed relays."

By June 29th, "simplified in some ways but no less complex. These four boards just left the factory via FedEx. First working prototypes planned for end of July." Meanwhile another recipient on that group email had checked in separately about experiments with a high-end EQ to boost the lowest bass of his sound|kaos sub. "Remember the Schiit Loki Max? First impressions are poor. With all knobs at 12 o'clock, the sound level is 6dB down versus with the EQ off. To maintain the original level one would have to set all knobs at 3PM which increases hum and limits the equalizer's functionalities. Despite positioning it far away from electromagnetic sources on Hifistay feet, it still injects an unhealthy dose of hum even at 12 o'clock (fully balanced XLR connections from Tambaqui DAC into icOn 4SE pre/filter into Schiit EQ into Amp-23R, all components fed by Puritan Audio Labs conditioner). The improvement of boosting 20Hz by +3/6dB is noticeable and positive. Unfortunately the Schiit reduces the soundstage, timbres are less precise, highs lose color/air and the overall experience goes down three notches. I tried placing the Schiit between Tambaqui and icOn 4SE. All the issues amplify by a factor of 1.5. I'll let it run in for a few days but am not optimistic it's a keeper. In a way it makes me understand why it takes Pál such efforts to do what he does."

By July 13th, Pál had first PCB on the bench for testing and assembly. By July 21st via group email, "the new hardware works nicely. I nearly sent it to Martin to try but without firmware it would have had very limited functionality. We return to Manchester next week and I'll send the first prototype to sound|kaos shortly after. It will be just the boards for his own enclosure. After our holiday I'll work on the firmware and create an icOn-style enclosure. Then I'll send out more Gradient 2 as soon as possible. Because I never used a sub myself, I'd be happy for suggestions about useful functions during the setup process. In the next days I'll prepare a detailed list of possible hardware functions. The final version will come after your collective feedback. I hope my different kind of remote-controlled A/B switching with reed relays for all outputs + input plus seven manually switchable xover points will make sub integration easier."