August 1st. Pál had the hardware working to finalize the firmware on what now was officially called the Gradient Box 2 or GB2 for short. As part of the group email, he itemized its functionality as follows: 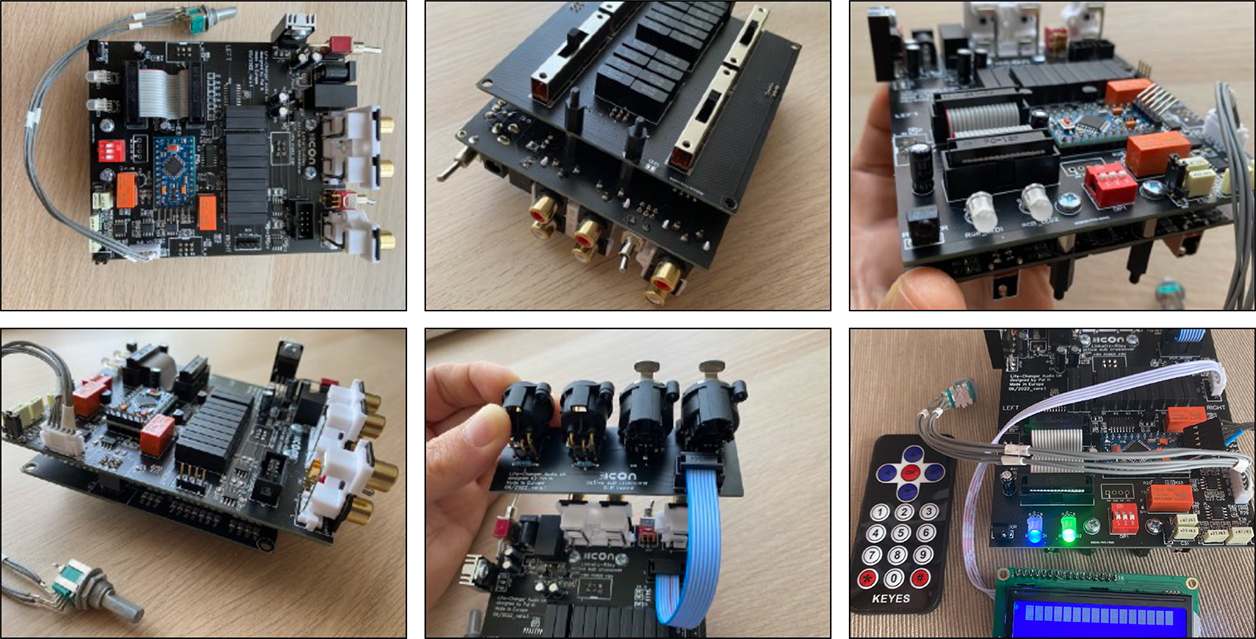 "The key difference between it and other sub crossovers is the remote-controlled A/B or A/B/X listening test function to determine optimal sub integration settings from the listening seat. This offers a quicker more convenient setup with more precise end results of higher fidelity. The remote-controlled A/B or A/B/X tests allow for instant switching between two manually set filter frequencies and bypass as the unfiltered signal at the mains, subwoofer muted. These comparisons can be made as often as necessary. There is a built-in microcontroller with IR remote, LCD display and two multi-colour LED for visual feedback during A/Bs and to control the reed relays of the i/o switching matrix. The seven manually selected filter frequencies of 40, 60, 70, 80, 90, 100 and 120Hz on active 24dB/oct. 4th-order Linkwitz-Riley slopes can be assigned independently for each channel. i/o socketry is one each RCA/XLR input, RCA/XLR hi-pass outs and RCA low-pass outs (XLR output optional via cable adapter). Sub phase of 0/180° is controlled by remote. So is the low-pass shelving filter to boost the lowest sub bass. The low-pass volume adjustment of ±10dB controls manually. Power consumption is 6V/0.4A, typical distortion less than 0.002%. The construction of GB2 is a sandwich. The upper board contains the power supply, i/o, uP, LP EQ plus level plus phase. The lower PCB contains the xover set with 4 x 7-position slider switches to chose the LP/HP filter frequencies independently for the left/right channel. It's possible to add a bespoke CNC'd remote with custom labelling but at $200 it'd be quite costly for what I think could be a max ½-hour setup after which you'd not use it again. I'll soon have a dedicated icOn preamp power supply as an option beside the usual wall wart and will have one for the GB2, too.

Now Pál asked the group which comparator modes would be most useful during setup:

In response to the group email, Pál answered its key questions. "I could enlarge the subwoofer gain adjustment beyond ±10dB but only within the limits set by a ±15V power supply and OPA1652 opamps whose max output signal is ±14Vpp or 10Vrms. With the bass EQ's +6dB engaged plus +10dB of sub gain set, total gain factor is x 6.3. Now the input signal and HP output signal can't exceed 1.6Vrms or the LP will clip. In my opinion, the gain of x 6 or 16dB is huge. Even with an extra-sensitive 0.5V tube amp on the mains, the 3V low-pass will drive 99% of all class D subwoofer amps. But if Martin can solve the overdrive problem by limiting max input voltage, there's no problem with increasing the current adjustment range. The bass-shelf EQ can be set to start at 40Hz or 80Hz via PCB jumper. For power users who need more than an initially aided setup and thereafter just a plain black crossover box, I still have a GT version planned. That will get 4W drive, remote sub volume, perhaps even a main/sub balance control, a custom-labeled big metal remote and a bigger display. 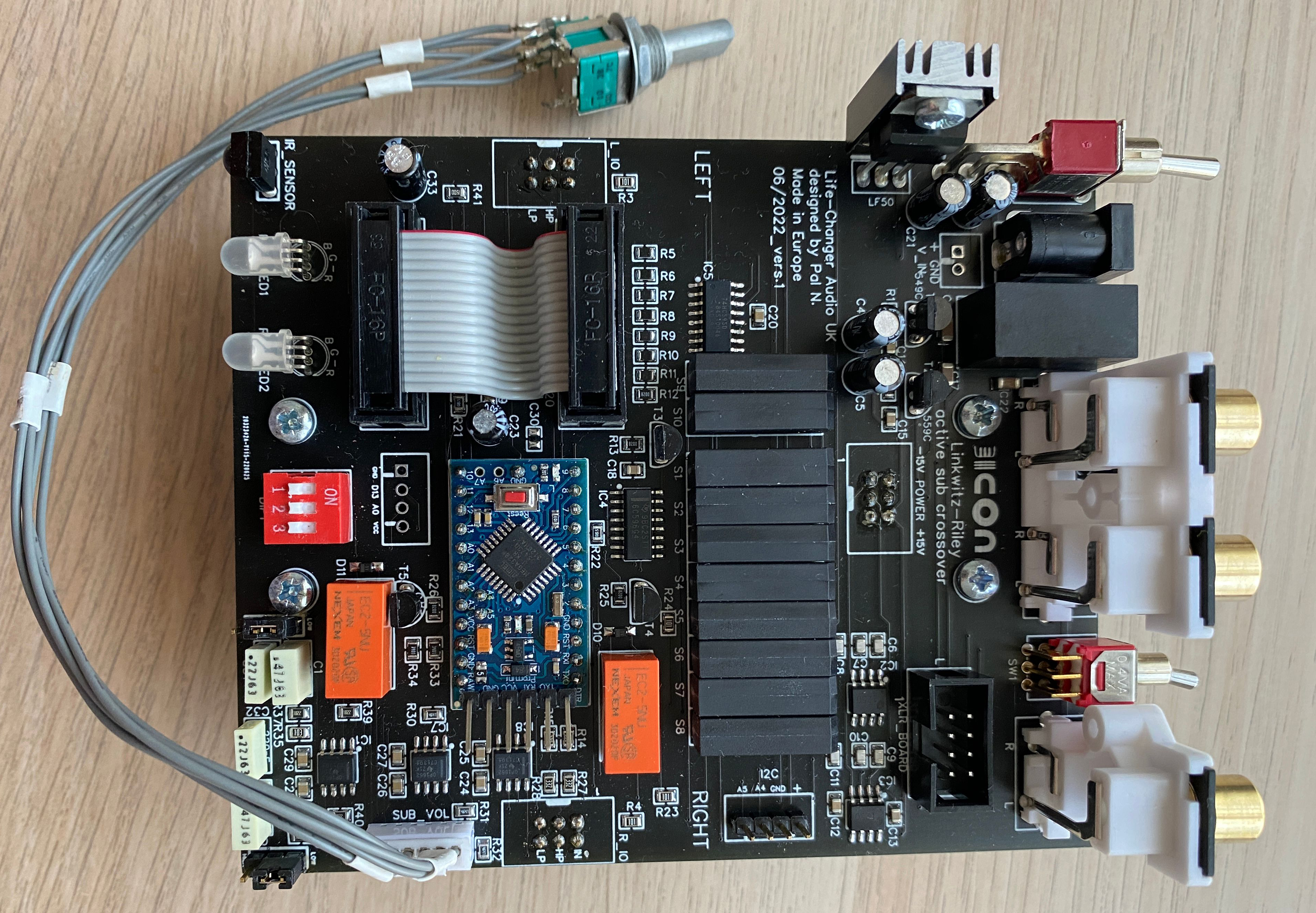 "After weeks of tinkering with how best to join this flexibility to visual feedback, the best solution is to define different listening-state buttons on the remote for bypass, normal xover, A settings (1st filter choice), B settings (2nd filter choice), HP only, LP only, full mute and any other useful combination. Two other buttons trigger EQ on/off and phase +/-. The toy remote will need a sticker on the back and/or user postcard to list its button-function relations. My standard LCD display is too small to see all setup info from a chair and a bigger Oled display created too much noise. The silent LCD will show state of EQ, phase, listening mode (HP, LP etc) and chosen frequency from a list. My compromise solution to show listening state from the seat à la Chord's loved/hated color hemispheres are two color-shifting LED for the left and right channel. Those show the currently active signal so green for bypass, red for HP, blue for LP, yellow for A settings, cyan for B settings, HP+LP (normal filter function) as red+blue=magenta. Making the workflow logical will need a good manual and/or video tutorial. That will be quite different for the costlier GT version with its bigger icOn display." 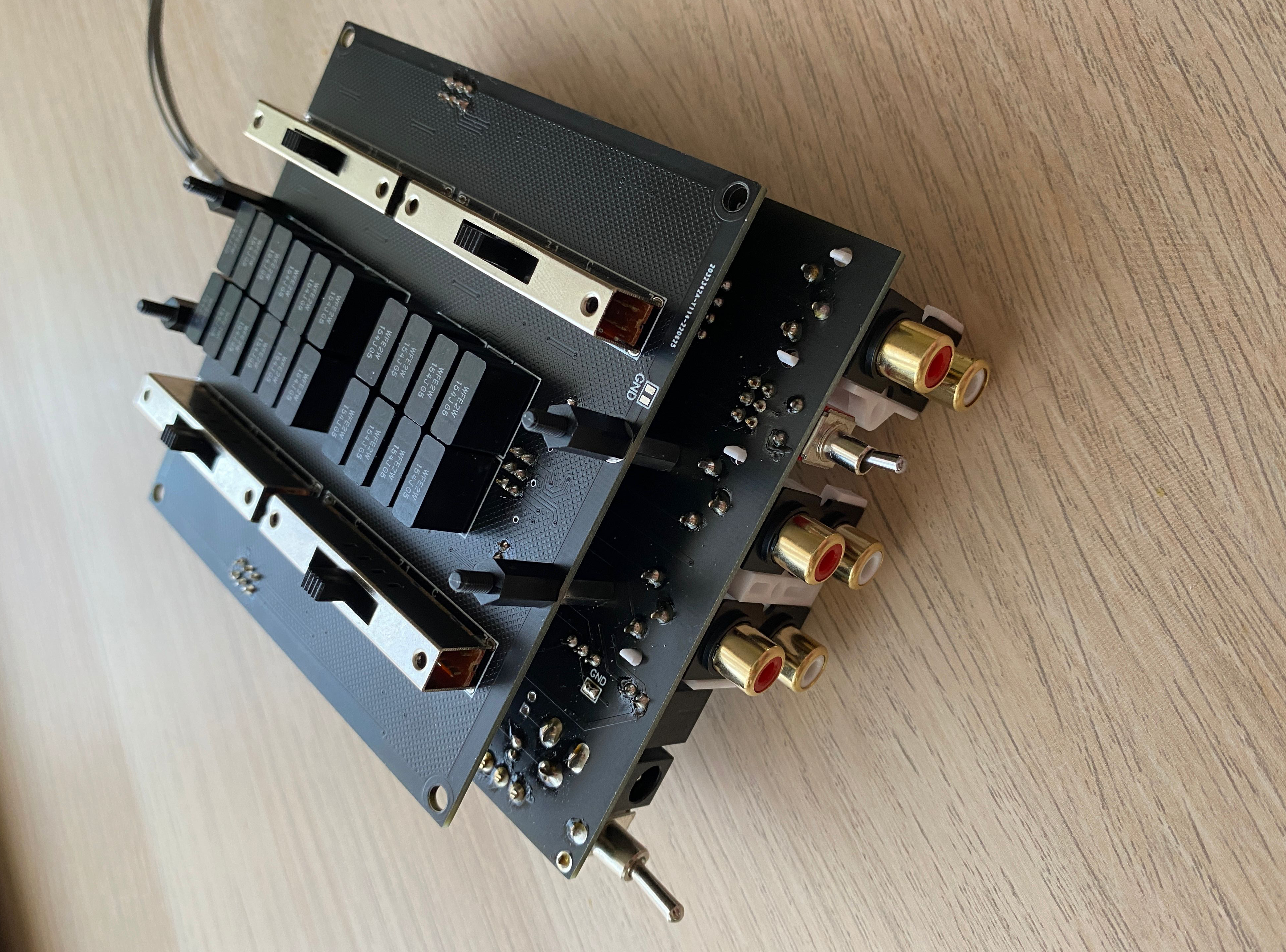 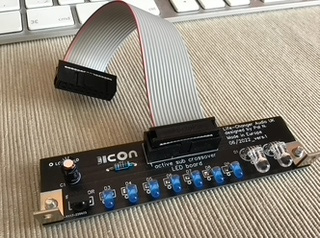 Apparent in Pál's communications was keen focus to contain pricing when for most users, GB2 past initial setup won't be more than a now fixed active xover not anything one keeps configuring. "If somebody hates the LED's visual feedback and insists on seeing feedback on a display, I can use the established orange 2-digit 7-segment icOn 4PRo display showing well-legible code like HH for left/right HP, LL for left/right LP, BP for bypass, CC for normal filter mode (HP+LP) and so on."

Prior to outsourcing parts population of his PCB because their layout had been locked in, Pál still had to solder them by hand. That involved 140 x 0805 resistors alone before he could even get to the bigger parts. On top of it all came finalizing a complex machine which was already a year late given unforeseen global events and their aftermath; all without incurring further delays. Keep it simple had to be the motto. Given how clearly not simple this design is, pacifying that conflict was the stumper GB2 addresses.

For an example of another binned experiment, "when I still had a microprocessor on the filter settings, I even made a board with a blue LED row showing frequency which was a royal pain to assemble. Modifying the controller board of the icOn 4Pro 7-segment display for those who dislike using the color LED will be far easier. Unlike with the Chord Hugo, Mojo and Huei, those colors will only be significant during the initial setup phase. A provided handout like a stiff postcard imprinted with what each color signifies will really make it very convenient to use then forget about."

As I put it to a sub user inquiry, the Gradient Box is a problem solver for those intelligent enough to have the problem in the first place. Say you want to compare what a 70Hz HP + 60Hz LP sounds like vs 80Hz on both hi/low-pass, perhaps to minimize a room mode. Set one combo for the A side, the other for the B side and switch them remotely from the seat, even against the unfiltered mains. It really drills down into what settings give you the best sound in your room and seat. Now add or subtract 20Hz boost, flip phase from 0 to 180° and back, also via remote. It's expert subwoofer integration made easier. Not personally being a fan of Chord-style color coding, I asked Pál for a sample with the bigger alphanumeric 2-character LCD screen I know so well from my icOn 4Pro. By showing the active signal with two letters, switching boost in/out or inverting phase would briefly confirm with their own two letters like SB for sub boost, P0 or P1 for phase before reverting to the main display.