When my sample landed, I set up Zoom so Pál could talk me through the features. He planned on laser-engraving the remote's back with a cheat sheet particularly for the hidden functions where a button press followed by another button enters a new mode. Once I'd tested them all, he wanted feedback on anything inelegant that a code rewrite could improve or simplify. He'd then send me new firmware, I'd check it again and the finalized reminder instructions would go to the laser engraver. On hidden features, once in mute displayed as 000, pressing LP- enters night mode. Now the display merely shows the decimal dot to confirm power on but reawakens briefly with any remote command. Still in 000, pressing LP+ instead shuttles between display dim or bright. Also in 000, pressing the central 'home' button enters standby and saves our settings of EQ, phase and LP volume. The display departs with 'bye sub'. Re-enter mute to depart standby with a cheery 'hey sub' greeting. The EQ button calls up either E1 (+3dB/20Hz) or E2 (+6dB/20Hz). PH calls up 0° sub phase as +PH, 180° sub phase as -PH. 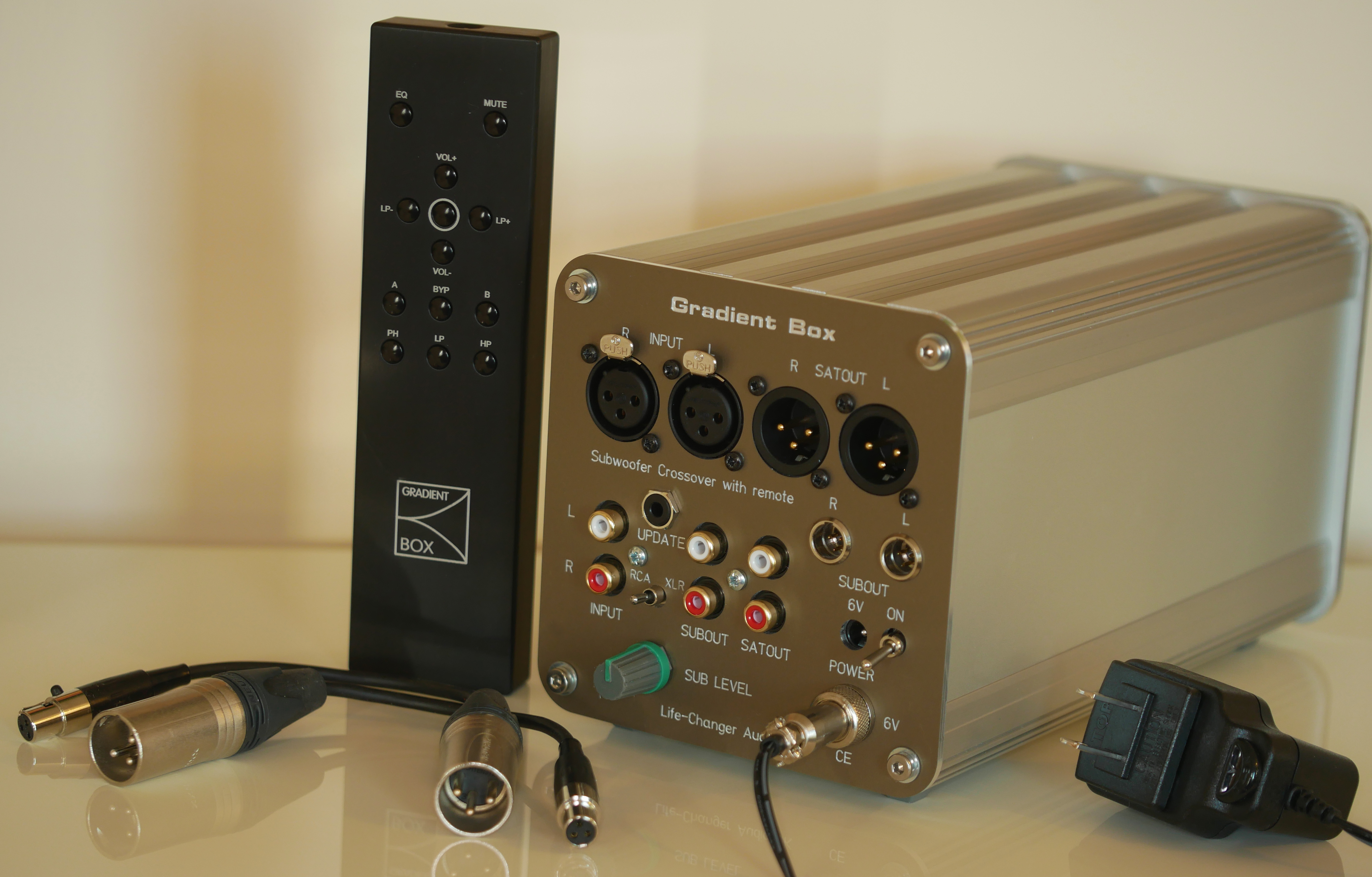 Use mouseover for loupe enlarger; or right-click image to open in new tab for full size.

Whilst his dual-mono exotic analog volume chips are hi-zoot 18V jobs, Pál's inner engineer always worries about clients doing stupid things. So he recommends input signal no higher than 10V to build in sufficient headroom should the rear-mounted sub level be set to full +10dB active gain and subsonic EQ to max +6dB. Otherwise unduly hot input signal plus two gain settings at max could overload his circuit and distort. Of course any system which requires post-preamp signal of 10V made very serious hardware mistakes which nobody in their right mind would ever expect an active crossover to fix. With the green potentiometer on the rear centered, there's no extra sub gain. Fully clockwise, the pot adds 10dB of gain. This setting fixes the max voltage which the LP± buttons on the remote then trim in 1dB steps. The ± buttons on the remote's master volume only attenuate. That means display 0 equals unity gain aka the incoming signal voltage. What comes in goes out. The 2.1mm 6V power inlet parallels the one we use with the supplied wall wart. It can serve those who insist on using a linear 6V power supply. The RCA/XLR toggle fixes the input we use. We can only use one or the other. Outputs however can freely mix. To rotate the display, pushing any remote button will do once the GB is belly up. Pressing the home button calls up the current settings of EQ, sub phase and LP volume in sequence before reverting to master volume. Bypass as shown next eliminates all filter settings and sub to run our speakers full-range. It's perfect for instant A/B of with/without sub/s to check that our bass wins aren't bought with sacrifices elsewhere in the bandwidth. Finally, owners of minimalist systems whose source can drive their amp to full output as is normal can use the Gradient Box as their smart passive preamp.

Beta testing only generated small continuity tips which Pál happily welcomed for very minor firmware tweaks. For 2023 he even proposed potential addition of balance-control code by exploiting his dual PGA chips. With many purist preamps shunning balance, some GB owners could enjoy having that facility? In the here/now of early December 2022, I was already tickled pearlescent pink by Pál's clever manifestation of my idea. It retired Wyred4Sound's preamp fronting my Goldmund/Job 225 bass amp. The Gradient Box bags the necessary gain trim. I asked our designer about the purer path. Is sub level trim via ±LP or green pot superior? "There's a small difference. Using the green pot and leaving LP trim at zero measures the even lower noise floor." Super convenient especially for reviewing proved the bypass function. It strips the need to rewire a thing. One remote command compares between speakers full-range and filtered/subbed. No adjustment causes any audible click or switching transient. The display reads easy from the seat and in night mode disappears unless I change a setting. It all led to this. Theoretically it concludes the review because the Gradient Box per se makes no sound. It 'just' acts as traffic cop or signal router to tell sub and speakers what to do where and how loud. Confirming that all works as advertised was the review. To get proper nerdy, some comments on different filter settings beyond my default 80Hz could interest potential buyers? So stay tuned for those in due time as I clock usage miles with different speakers across Q1 of 2023. 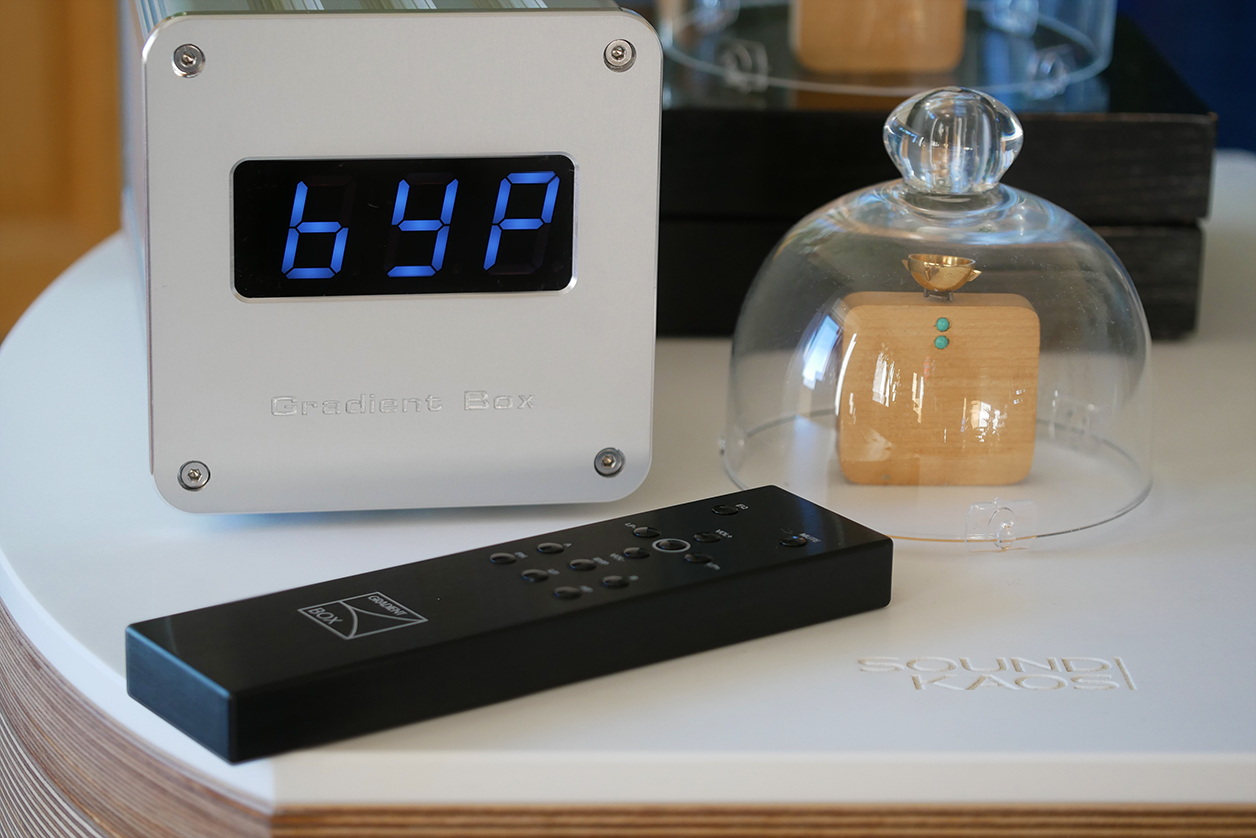 For now this assignment wraps up with a bodacious bang. Fire and the works. The end?

PS: December 15th. It's when Pál's firmware flexibility and my older idea of a pure balance control collided. He proposed to rewrite my code to have ±LP attenuate the sub feed from 0 to -62dB in 1dB steps, ±volume do the same for the speakers. If a sub plays too loud, one cuts the speakers by the required voltage; or vice versa. This obviously disables the other version's master volume. Because I run with either a variable source or preamp, I would never use the Gradient Box to adjust my global listening levels. I thus prefer that my unit repurposes its top-shelf volume-controller chips for sub/sat balance in pure attenuation. For emergencies i.e. stupid combos of mismatched voltage gain on the speaker/sub amps plus the transducers' grossly disparate sensitivities, the +10dB green sub pot remains available to make the sub go twice as loud than zero cut.

PPS: December 17th. After a TeamViewer session and downloading the latest CP210x driver, I successfully installed the new firmware script via Arduino's interface. With this version, the remote's ±LP buttons attenuate the sub—the 'plus' button reverses attenuation until it hits zero—and the ±volume buttons do likewise for the speakers. A left LED dot signifies LP mode to look different from HP volume. As before the home button confirms the four settings of EQ, phase, LP and HP in sequence. So does waking up from standby; or going live after a full power-down. Starting a session not knowing what the box is currently set to is impossible even if other listeners changed everything in the interim. Coming out of standby shows it; or hitting the 'home' button whenever. Genius. And yes, for the manual filter settings you do have to turn over the box. The microprocessor can't see those.

December 25th. With my 3rd firmware revision, Pál cleverly nixed a small cosmetic criticism of mine. Until then, the default display showed a number as either the master volume of the original; or the low-pass/high-pass trim of my 'balanced' version. Since he'd already introduced humor with his 'hey' and 'bye' welcome/log-off display, I suggested that seeing a word rather than number in the default mode would be more fun and consistent. Now he'd made that word 'joy'. Night mode can still bypass it to show a small dot instead should anyone get too joyful. And presto… 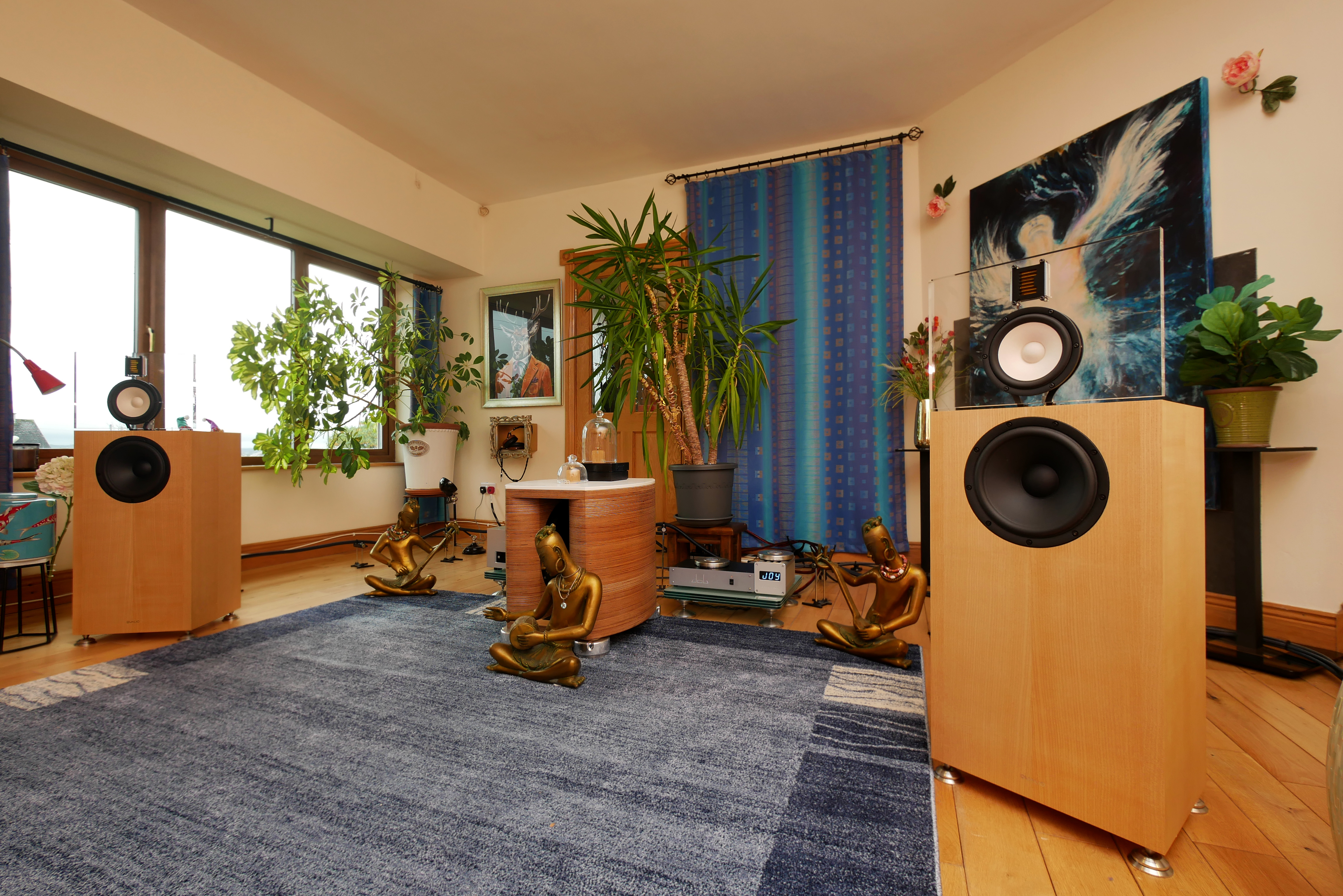 Use mouse-over for loupe enlarger; or right-click to open full-size image in new tab.

… another GB2 flavor. This really was the never-ending story. Of course Arduino's logo is the horizontal 'eight' signifying an endless loop. That seems most befitting a box with smart MCU. Here's a bit more…