It's a smart analog crossover without digital latency but remote control over most adjustments. It's the Gradient Box. Let's call it GB for short. Unlike Brexit of the other GB, it's no self-inflicted problem generator—for the designer it very much was as we'll see—but an elegant problem solver. In our stereo space, competitors are scarce. Magico's outboard xover is $48'000 yet strangely fixed at 55Hz. Designed by legend John Curl, there's Wilson Audio's $4'500 Active Xover. spl from Germany have their own but the Irish distributor I got assigned to didn't respond. A query to JL Audio's European sales manager netted no response either. Aavik's €4'000 analog module only installs in their P-280/580 preamps. A cheerful analog outboard option is SublimeAcoustic's $500 K231 active xover. At $1'200 there's the Marchand XM66. Other high-end solutions from Bel Canto, Linn and TotalDAC embed the necessary filters in a DAC's DSP with volume control. Pro-audio vendors sell Behringer types. No matter how we slice our hoagie, options are far from plentiful. GB now adds itself to the small table. Pál Nagy for 6th Earl of Sandwich? For the full genesis story including why one should want to sub and how music and movie bass differs, click here. Now that we know what GB is, we need to detail what it does. "The filter freqs are 26, 40, 53, 60, 80, 92, 106, 120, 132, 145, 160, 171, 184 and 198Hz. The input, low-pass and high-pass outputs can be unbalanced or balanced but only 3 socket pairs altogether. There's mono/stereo sub mode, ±10dB gain adjustment and continuous phase which a lot of customers asked for. There's also remote-controlled LF EQ with 8-10 different settings and defeat. If someone wants to use their sub's own low pass and other features, I'll have a Gradient Box Lite version with only the high-pass filter with remote control." 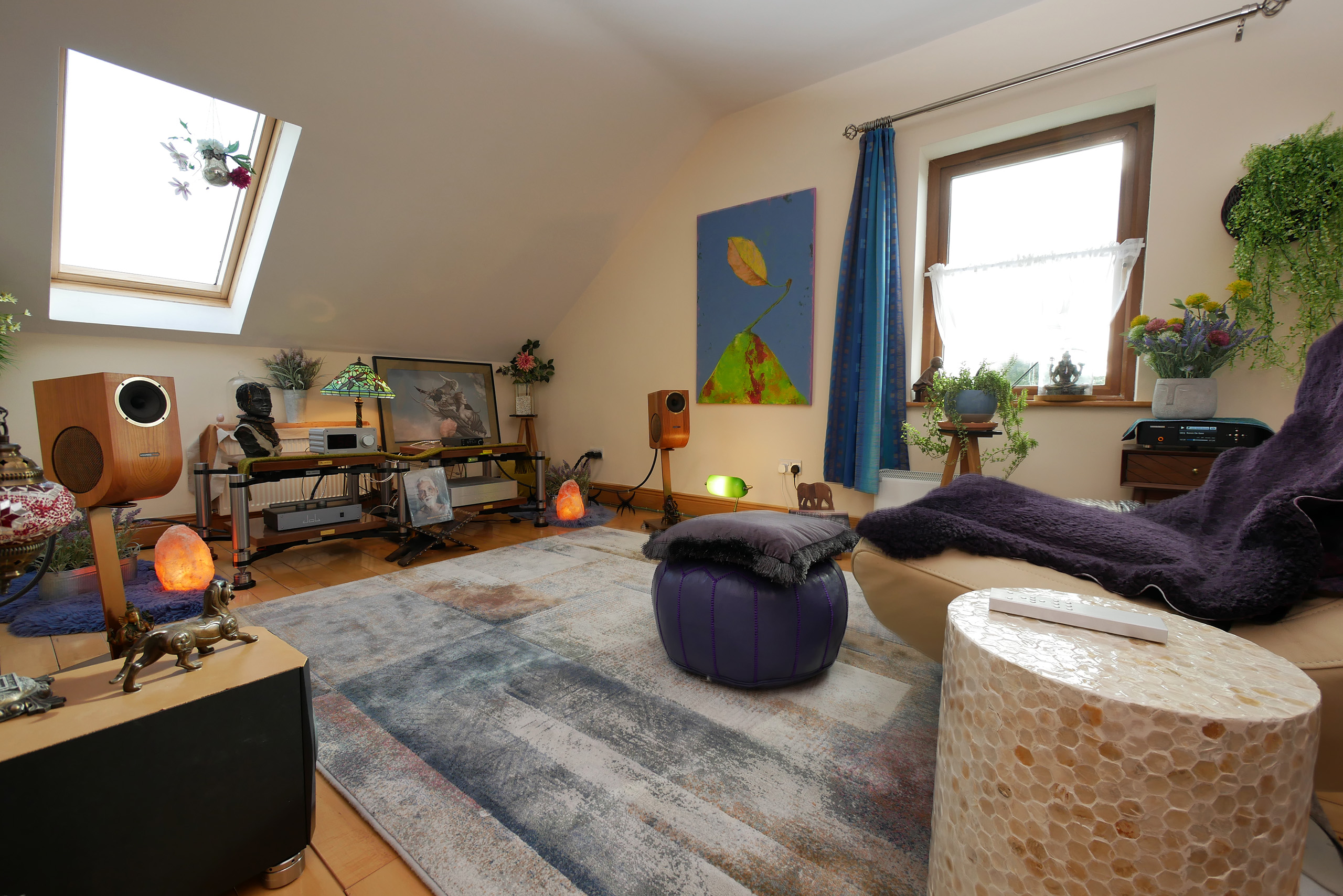 My icOn 4Pro SE splits the signal for the sound|kaos Vox 3awf and Dynaudio S18. Forward sub placement compensates for its 2.5ms of digital latency.

Why has no one offered all this before with remote control? "There are no 'audiophile'-grade digital potentiometers. A very few good-quality digital volume-controller chips exist but they can't replace switched precision resistors due to serious drawbacks of unduly high switch resistance, noise, distortion etc. I think that's why current analogue chip tech can't yet efficiently integrate analogue switches and precision resistors onto one IC. There are discrete opamps of course and soon I'll have 'discrete digital potentiometers' as the main building blocks of my xovers, later perhaps even analogue filters like smart phono preamps."

What the purely analog Gradient Box can't do is add delay. That would require DSP. If your sub suffers latency, you must compensate physically. Our Dynaudio's latency is 2.5ms. Sound travels 1 meter in 3ms so our sub places 83cm closer to the seat for coincident time arrival with the monitors. Meanwhile two Dutch Grimm Audio SB1 subs with digital motional feedback had such marginal latency that they could sit right next to or between the speakers. What you shouldn't do without having digital delay on your speakers is move the sub into a corner. Now its bass will obviously be late because it's another meter or more from your seat. That's well before we add potential digital latency in the sub's processor. Perfect subwoofer integration doesn't just rely on ideal frequency filtering and correct loudness between sub and mains. It also demands correct time alignment. Doof doof boom boom may not care as long as it's loud enough. Fair enough. Today's product is a sophisticated problem solver. If you don't have any bass problems or see room for improvement, you won't need it. Simple as that. For the rest of us, it opens up possibilities. 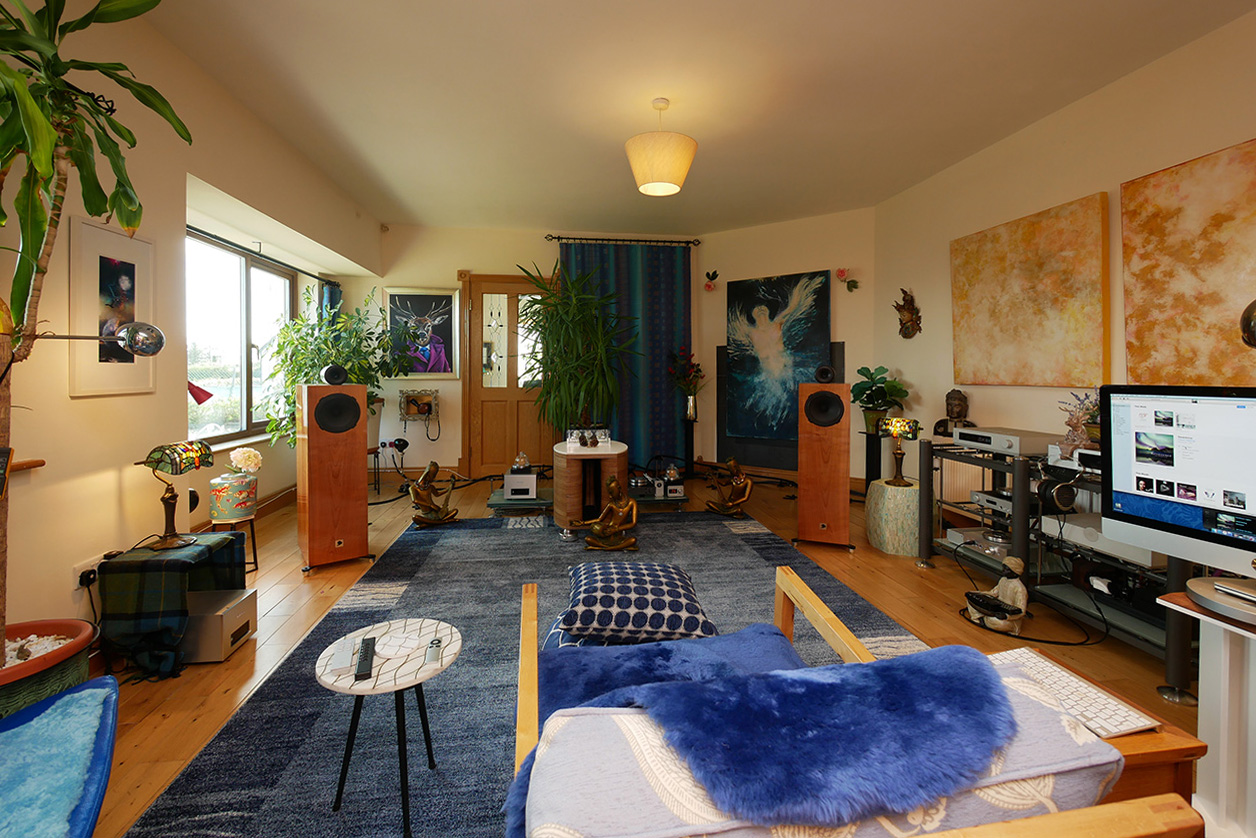 When I wrote this, Pál still had to write firmware to trigger his relay-switched potentiometers and actually test the motherboard. Unlike competing decks with manual front-panel knobs and sliders, his would execute remote-controlled firmware navigated by display. To avoid a remote wand festooned with buttons, designing an intuitive workflow was key. The Gradient Box thus wasn't just a hardware design challenger. Its firmware integration was an equal stumper. It's why Pál joked that had he conducted a prior feasibility study, he'd never have embarked on the project in the first place. The amount of R&D time which clocked up relative to GB's niche appeal—how many high-enders are seriously prepared to add a subwoofer to their 2.0 system?—became crazy unreasonable. Writing this includes personal repentance. GB's concept had come to pass after I asked Pál whether he could embed a fixed hi/lo pass in my icOn 4Pro preamp. He'd replied in the affirmative. I'd selected a 40Hz/4th-order Linkwitz-Riley filter. The icOn 4Pro SE was the result. Soon other clients asked for different filter values. Now Pál found himself designing one-up filter boards; a time-consuming distraction. Later I'd emailed him a did-you-see-this link to a flexible active xover by RiPol inventor Alex Ridthaler. That shortly after discontinued due to a supplier for vital parts closing shop. But Pál's creativity had already embraced the challenge of building a better mouse trap. Better wouldn't just mean superior parts but functionality. Key was remote convenience to assess the sonic effects from parameter changes in the seat.