Downstairs lives our best DAC—Cees Ruijtenberg's Pasithea goddess under his Sonnet brand—and 2nd-best headamp by Kinki Studio. Like the Enleum, it runs Exicon's lateral Mosfets in a class A/B p/p circuit. I bypass its attenuator and control volume by remote via Pasithea's variable reference voltage for the multi-paralleled R2R ladders. Unlike the AMP-23R, the Kinki gives me an XLR4 connector for Susvara. Since I misplaced its 6.3mm leash, for these sessions the Enleum got benched. 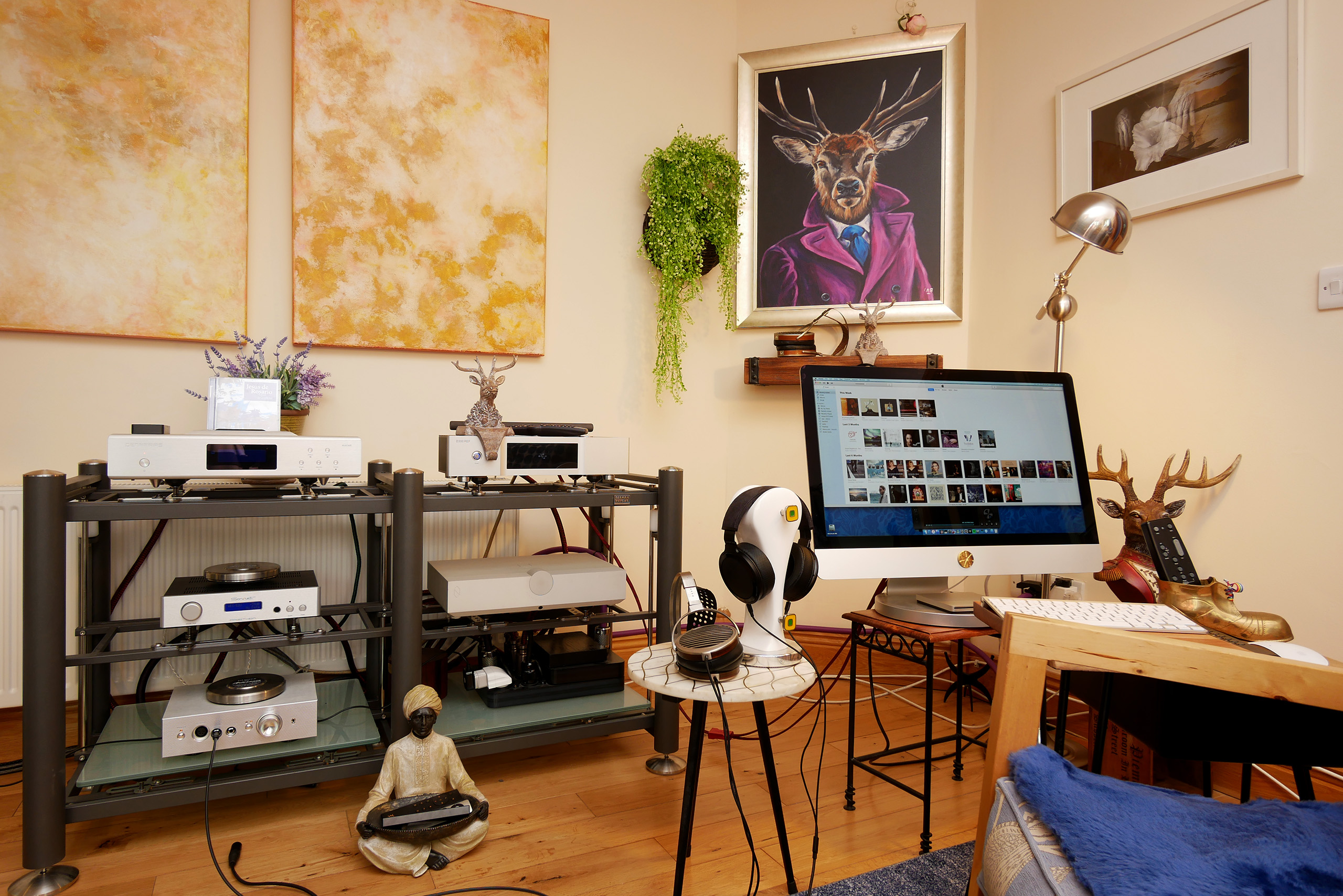 These readings now came from a shared aesthetic. They were more similar just not the same. Susvara slotted between ER and SR1a. It didn't split the difference but its more electrostatic than early Audeze ortho voicing contained stronger ribbon echoes than did Oleh's more dynamic balance. I'd call the HifiMan faster, airier and leaner, the Camerton more robust, earthy and punchy. The ER's greater shove emphasized the virility of Ptih Moh's guttural Rai vocals and the snotty attitude of the oud's antics on this genre bender from French flamenco fusion maestro Juan Carmona. They felt more piss 'n' vinegar so corporeal. They got down harder.

Susvara applied more lightness of being. It felt less substantial; a bit more of the mind, not quite as much of the body. That's back at that quasi electrostatic gestalt. It shifts more onto apparent resolution and attacks. The ER followed up with more fist-shoulder-hip alignment; that aforementioned shove or punch. On that score I actually flashed back on my early LCD-2 days. This present version from Berlin was simply far more linear. It also didn't apply tone as makeup to cover up detail. I heard great tone and dynamic pounce. Detail density felt a bit like seeing the Milky Way on a cloudless night. Though the overall context is one of darkness not high-noon sun, it still teases out innumerable individual stars. To my ears the ER prioritized physicality as its front line followed directly by dynamics. The little details embedded so were present and accounted for, just not spot-lit.

Even greater sonic overlap came back on my desktop with Final's original D8000 on an Audio Arts HPX leash. The Japanese orthos are physically larger and also offer wider slider adjustments for a guaranteed universal fit. For my swollen head, they're true over-ears. The Camerton approached being on ear. About those cushions, Final's weren't nearly as luxe as Oleh's. Likewise for their headband. ER owned the sharper luxury edge. Meanwhile loudness over iFi's Pro iDSD Signature was nearly on par. That required very little compensation on the dial. The Japanese treble was just a tad more turned on to give playback a touch more freshness. Think satin or silk not matt paint. Both agreed on bass potency where the D8000 with stock cabling had arguably gone overboard to fall back in line with the aftermarket cable from sunny San Diego.

Hitting up Kalya Scintilla's Remix Archives Vol.1 with its depth-mining synth beats and gnarly noise effects was colossal fun with both. Though the Binom-ER was rather smaller to register each time I swapped back, as soon as their cushions hugged my skull at just the right headband tension, I forgot all about size. Likewise for sonic offsets. They were present right after a swap but seconds later already gone from any ability to pin down for inspection. For our purposes it's enough to call the D8000 and Binom-ER peas in a pod. Your purchase decision will be far more about looks, fit and price than widely spaced sonic flavors. That's the general lay of these lands. I mapped them with the Camerton fresh and different in our digs so before I had set aside comparisons. Then I had to tune into them exclusively to make them my temporary new and only sonic reality.

In such solitary use something might float up to the surface or move to the fore—with particular music perhaps; or as a general tell—that marks a weakness or condition that must be managed to safeguard happy relations. I couldn't foresee this for wear comfort, build quality or the blessedly twist-resistant cabling. Knowing my biases, instinct predicted that I could find resolution/separation, treble energy and air insufficiently developed. My tell is loudness. If I catch myself drifting into higher SPL than usual, it's virtually always to open the curtains fully. Let all the light in. Alas, loudness can't do that. If something starts out on the thicker side of the fence, it doesn't slim down and get more transparent because we make it noisier. By way of what I suspected would become my desired course correction, I teamed up Sonnet's Pasithea converter with Enleum's amp. Go make babies?