Deliverance. If you're no friend of elaborate display boxes—a recent €10K power cord arrived in a solid bamboo box to do the family silver proud—Oleh's modest yet super-protective box with mag latch won't rub you the wrong way. Once you extricate his product from its deep precision-cut foam, your likely biggest surprise will be size. For over-ear cans, these are small. In fact, pulling the short magnetic sliders out to their end stops just had the perf leather pads clear my ear lobes. Whilst clamping force of the bridge felt stout prior to wear, these fat pads are so plumptuous that on-skull feel was fuggedaboutit comfy. Pulling off one ear pillow which seats with a small sewn lip to rotate freely shows a real Slim Jim assembly whose many screws hide artfully once the pad is back on. 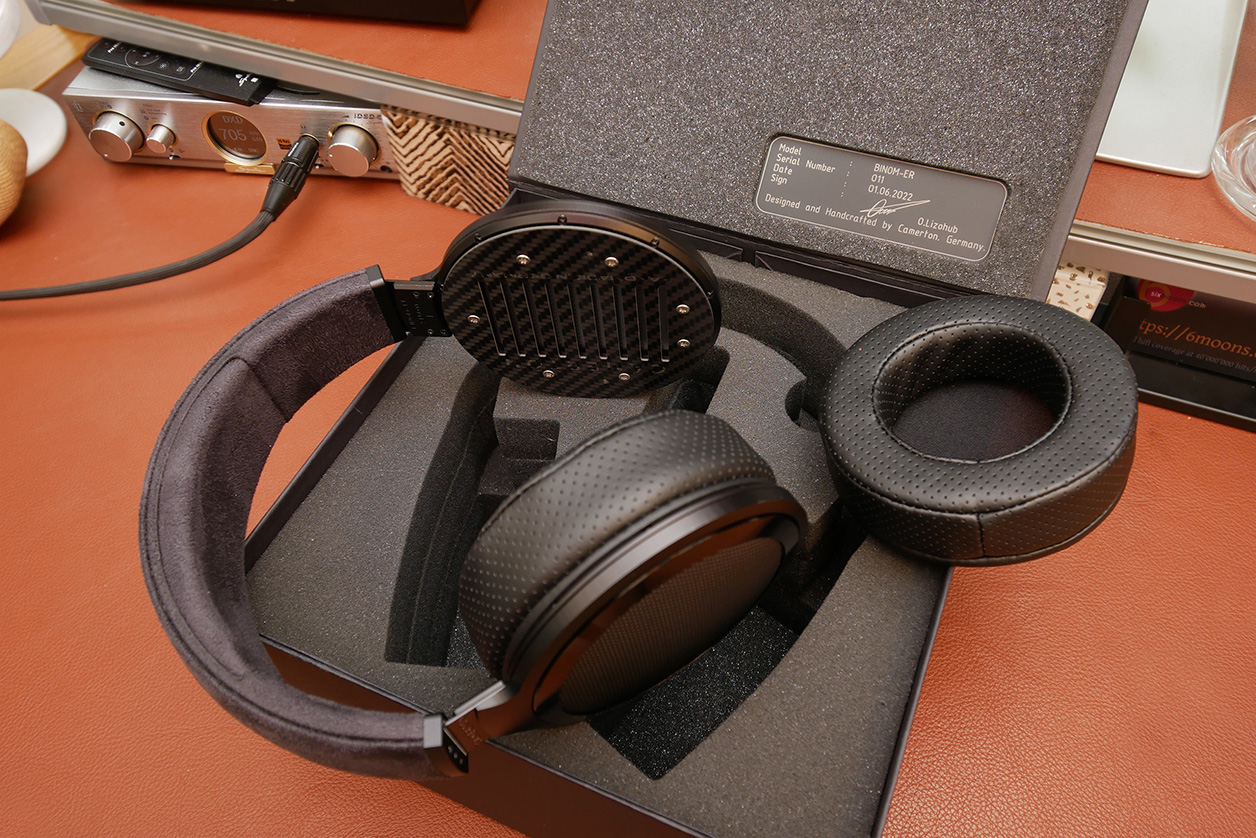 When you remember that my mug shows max extension, you'll appreciate how close Oleh cut sizing for big heads and lowrider ears. I'd actually like to see longer sliders; and/or slightly thinner walls on the ear pillows to increase their opening. The headfi.org thread had asked whether mine was the latest version "with longer rods, lighter clamping and wider inner diameter of the pads". Oleh confirmed that. My samples didn't have the two-tone headband of earlier photos to instead be a consistent dark grey. Bling worshippers could call the Binom-ER a bit short on flash. It's definitely not a Focal. Anti-bling brigadiers will applaud Oleh's understated styling which plays it more old-money conservative. Think deep-buttoned Chesterfield leather chair not Herman Miller Aeron. Despite my silver allegiances, I thought that this black/charcoal ER cut a very fine figure indeed. 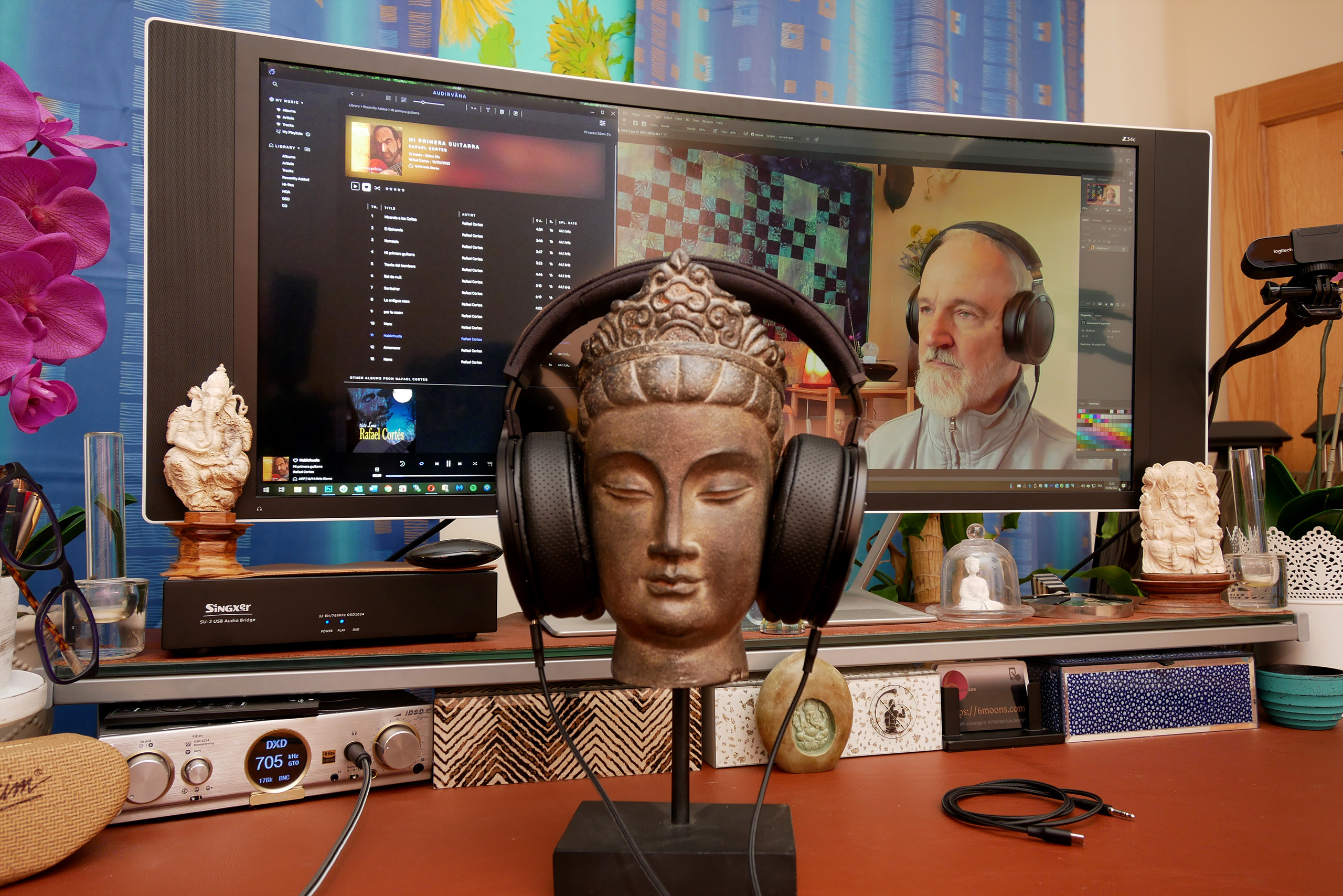 Mouse over for enlargement function or open in new window for full size. Single-entry mobile cable on table top.

The same minimalism applied to the lightweight slinky cable and its petite splitter. Where flashier operators hang on heavy shiny metal and translucent sleeving to show off the silver of a mesh shield, Oleh's choices and execution play down the gear fetish. If you need shine to justify this kind of spend, it'll have to be the sparkling white teeth of a big smile when you press 'play'. Once you do, three things will hit you very quickly: decidedly broad soundstaging; powerful but not bloated true sub bass—using a 2×15-inch subwoofer in the main system is a good reference—and top-end sparkle cutting through only when focused on. I soon determined to follow Elvis out of this building into our celestial upstairs. There I had to look up an owner's manual to be reminded how to set Enleum's AMP-23R to low gain. I'd set it to high many moons ago to suit HifiMan's Susvara. Now I barely got out of 1st gear before things were too loud. Once sorted, I managed 9:00 o'clock. Now I used our very best headamp; just what any good audio doc would want for the ER.

The preceding DAC was an Auralic Vega. Its XLR outputs fed the Schiit Jotunheim R in parallel. Local files up to 96kHz came via AES/EBU off an smsl SD-9 SD card transport. And no, the Schiit driving Raal's SR1a doesn't need monstrous mechanical isolators. The Enleum simply heats up. Plenty of physical clearance matters. Those Hifistay footers manage whilst still stacking the lot. With both ribbons and planarmagnetics live at the same time, I could A/B conveniently. And going from A to B and back did rather cover some distance for unmistakable profiling. Having tried the ribbons via their impedance adapter box off our 30wpc class A Pass XA30.8, I know how Schiit's budget amp doesn't do the same mass and color saturation. Dedicating a big hot-running very heavy speaker amp plus separate preamp to bedside headfi just wasn't my idea of a good fit. The compact Schiit with attenuator thus has my vote. Mentioning its relative limits on overall density/weight and timbre intensity to instead emphasize the ribbons' speed, resolution and dynamics is simply fair prep for discussing how these two flagships diverged when ER benefitted from an elite €5.5K amplifier. 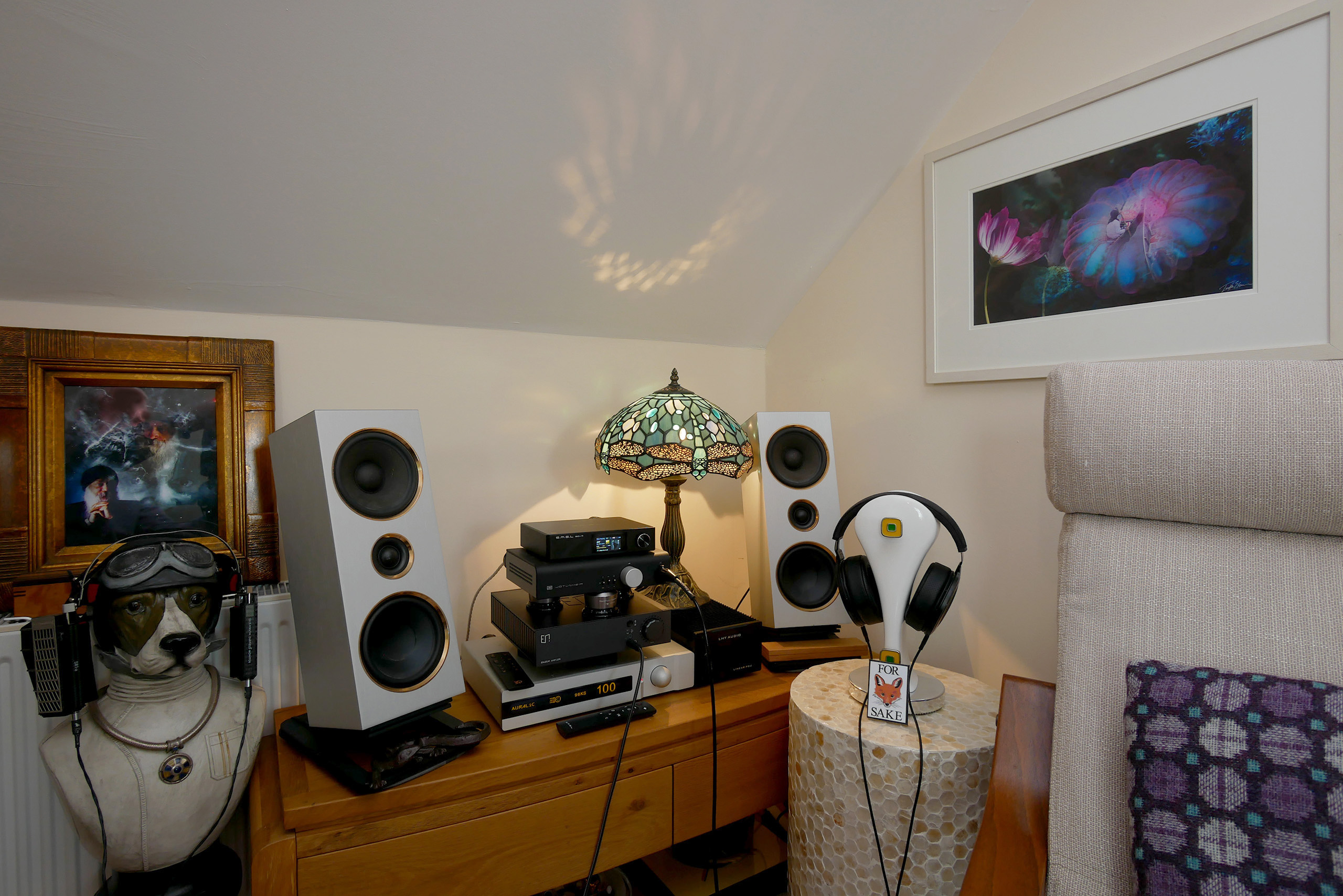 For top-down illumination; for how that lights up the entire bandwidth from the inside out to create extreme separation and spatial resolution; for how individual transients peel out texturally like the nails on a fakir's bed – for none of those and related attributes were the SR1a challenged. If that's how you approach the ER, they'll strike you as instantly thicker, more opaque/mellow on PRaT, heavier, softer and subliminally resonant. If then you let your ear/brain adjust for a few minutes before you wear the steampunk ribbons again, those will predictably strike you as bright all over, texturally sharper/leaner, generally more damped/clipped and dynamically twitchier. Unlike orthos, Raal's ribbons put no magnets between diaphragm and ear. Theirs sit on the foil's top and bottom edges. That's above and below the ear so out of the way. As splayed-out open baffles, they even eliminate enclosure effects. Meanwhile Camerton's ear cushions define two enclosed spaces. Those are quasi miniature rooms against our ears. They and the window-shutter magnets trap and reflect sound and build up some air pressure. That's radically different airflow with sonic consequences. The presentation increases warmth, fat and transient softness. By contrast to the ribbons, the treble casts over so overtone brilliance dims. That change in lighting increases fleshiness and substance but mellows subjective speed and insight into dense passages. Informing the same body-building effect was the ER's bloomier fatter more visceral bass. That made for more of a bottom-up take to Raal's top-down perspective.

In this juxtaposition between two very different driver and enclosure types, the Binom-ER behaved more like a ported speaker against which the SR1a played cardioid open baffle. This put fundamentally opposed principles to work. Comparing them only confirmed that fact. One can't expect them to behave alike. That admission defies value judgments. It's the fruity old thing. One can declare favorites but invoking better or worse with apples and oranges is silly. Far more relevant is comparing product from the same species. Enter HifiMan's Susvara. At €6K that's a direct competitor though subjective build quality would have you think that it ought to cost half; if that. And of course it's a truly piggish load whilst the Camerton is mobile friendly.