Soon it would be time for the headphone to attempt the same. By then Meze had introduced their €4'000 über Empyrean Elite. As I put it in my newsroom post, "welcome a new flagship to the high-end headfi jungle. With Dan Clark Audio's recently announced Stealth, there are new big cats roaming. If you're out on hifi safari, keep your eyes peeled and your Jeep at idle should one decide to pounce. If you brought your checkbook, all will be well." Statement options in the sector were multiplying. On price, Oleh's positions even higher than Elite and Stealth so virtually on par with HifiMan's closed-backed HE-R10. Meanwhile Focal and Meze set new standards of industrial design and luxo finishing as areas which the Binom-ER is committed to as well. Here to only sound great no longer cuts it. Just being on time never did for luxury watches either. Wear comfort, build quality, finish tolerances, upmarket materials and dialed cosmetics are equally vital. And so they should be if you can afford to pursue complete packages of any product type. 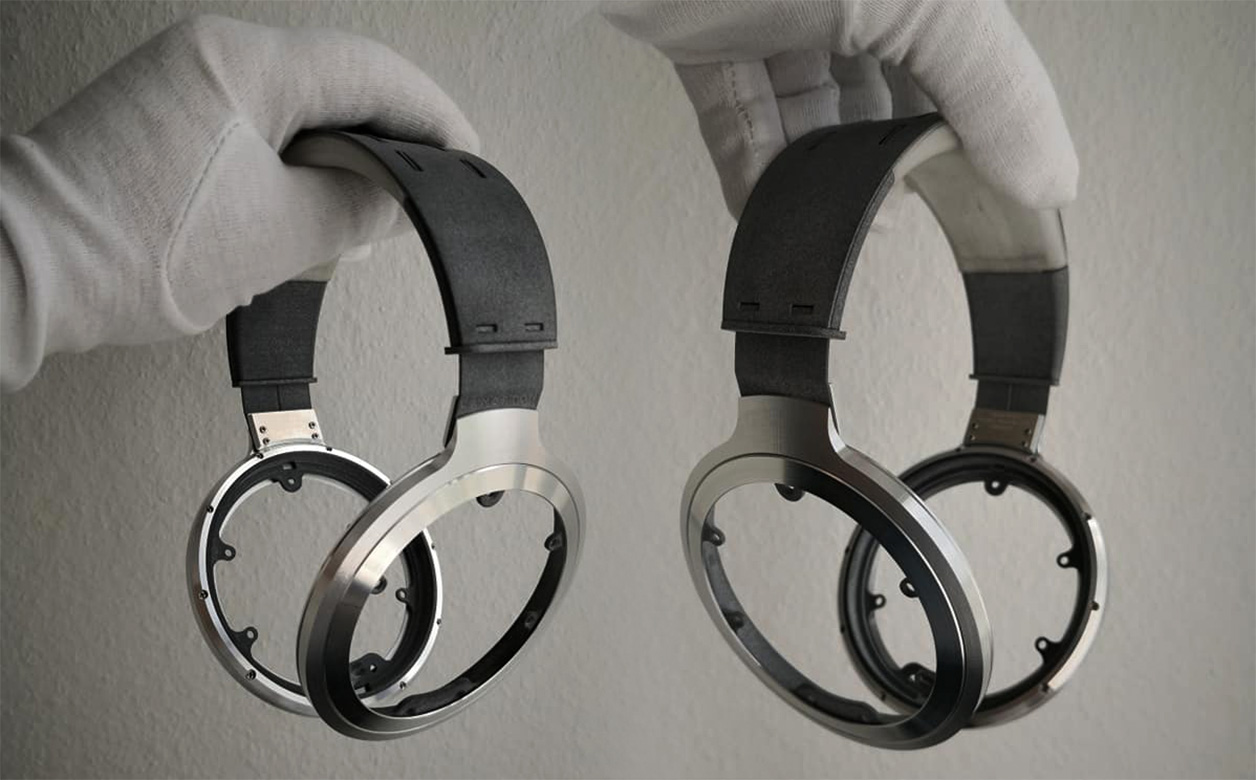 If we cannot or don't care to, there are always more pedestrian options. Most people simply have areas of special interest. Now good enough isn't. It could be food, wine, cigars, machinery, tools, travel accommodations or clothing. Oleh went to the ends of his abilities to make the Binom-ER, the right sound freaks will invest to the ends of their abilities to own one. Should we take a wild guess on the small fortune it cost Oleh to set up his new machine park in Berlin? At Focal, press members aren't even allowed to enter the clean-room facilities and take photos of their headphone production. Attempting to compete with corporate resources is tough for any small operator. That Camerton are mad enough to try shows chutzpah. Meanwhile things hadn't gone snooze on the headfi amp frontline. I was booked to review Enleum's AMP-23R and ferrum's Oor powered by Hypsos. If my revolving doors timed out right, perhaps their visits would coincide with the Binom-ER?

While that meant hope, general things about upscale headfi are certain. Due to proximity, one driver not much bigger than a speaker tweeter can cover the entire bandwidth. No crossover means no filter-induced phase shift or power-absorbing parts. A single driver means no material/sonic discontinuities from different drive units. Proximity shortens timing errors regardless of remaining reflections caused by headphone magnets or ear cushions. SpeakerFi contends with many meters of reflective path lengths unless set up in the extreme nearfield. Those reflections add delay hence acoustic reverb and in nonlinear fashion across the bandwidth. Headfi shrinks this down to centimeters. That removes the room and its EQ on the amplitude and time domains. Proximity and ear cup shielding lower background noise. That improves S/N ratio and eliminates typical distance losses. Added up, headfi operates with higher resolution and superior linearity to equivalent SpeakerFi; and for relative pennies on the pound. The closest we get to hearing the truth of our recordings before our room makes a lie of it is headfi. Where speakers are most true in the nearfield, headphones replace 'near' with 'inside'.

Even open-backed headphones hold another big advantage over speakers. They let us hear what we want when we want and very often as loud as we want. Speakers are heard one or more rooms over. Music leakage is as annoying as second-hand smoke. With headphones we can do it at 2:00AM in a tiny apartment with a perfectly happy marriage and neighbors. Time to disclose my headfi status. Audeze's 2009 LCD-2 were my first planarmagnetics followed by sundry MrSpeakers Fostex rebuilds and Oppo. The Audeze soon displaced my flawed Sennheiser HD800 dynamics. Various Audio Technica, Beyerdynamics and Grado fell by the wayside. The LCD-2 had their own flaws. When I met HifiMan's HE-1000 later Susvara then Raal's SR1a ribbons plus a few estats from Stax and Dan Clark, I soured on the LCD-2. It now struck me as too thick, resonant, opaque and hooded. I also gave up on their excess weight and undue clamping force. No helmet for tunes. Today my favorite is the Raal. Its lead on dynamics, speed and lucidity translates strong even on Schiit's budget Jotunheim R whilst competitors can't keep up over the elite Enleum AMP-23R. One down from my best sit HifiMan's Susvara and for half coin, Kennerton's Wodan. I already had the former so post review, the latter returned to St. Petersburg. Otherwise I'd own Wodan as my top orthos. I run Final D8000 on the work desk. I reviewed Meze's Elite and Empyrean. The D8000 and Elite form my third tier. A pair of Final Sonorous X replaced my HD800 as a superior take on similar sonics from a flagship dynamic. But my allegiances have shifted to the ribbons then orthos. That describes what Camerton would parachute into.