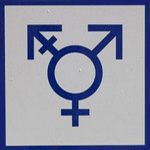 Third gender. On January 1st 2019, Germany became the first EU nation to offer the option of an intersex birth certificate. This addresses people who biologically and/or psychologically exhibit aspects of both genders. When coming of age, they do not identify comfortably as either male or female. With our language limitations eliminating he/she, that currently only leaves it, they and them. The German legislature's chosen term for birth-certificate identification is divers, literally various. For now it relies on a medical certificate to focus on 'ambiguous' biology rather than psycho-emotional dimensions. Still, advocates consider it a first step in the right direction which eventually must transcend the outdated rigidity of the old duality which doesn't account for the variations. 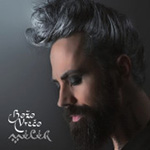 It's interesting to link this to the tube/transistor debate. There our current stand-in for a biological hermaphrodite is the hybrid as audio's attempt at a third gender. Like the far more important and interesting people debate, it explores 'difference' beyond strict dualism. Unlike human biology, walking in somebody else's hifi shoes is as simple as swapping hardware. Musically too, this field is rich, be it Bosnia's Bozo Vreco singing svedalinka tunes traditionally exclusive to women; or Turkey's Bülent Ersoy and Spain's Falete crossing a man's vocal power with a woman's touch.

Wherever traditional vocal lines of reach, timbre and delivery get blurred, some very interesting things can happen.

Back on hifi hardware, it becomes a merger like those portions of Schubert's melody from the 9th Symphony's 2nd movement which oboe and clarinet play in parallel. Rather than hear two instruments, one should just hear one new compound timbre. Likewise for our hybrid options. Those can mate solid-state preamps with tube amps; or within a tube amp, Mosfet drivers with power triodes like KR Audio promote. Vinnie Rossi's L2 system of DHT preamp and transistor monos does the opposite. I've tried sundry takes on the solid-state+tube options. For my ears, the most potents gains of each device mate a DHT preamp to superior transistor amps of the requisite speed and bandwidth like Vinnie proposes. Either way, the resultant sound is a merger. Calling out discrete tube and transistor parts is pure artifice for the sake of hinting at the outcome like wine reviews do… notes of wildberries with a whiff of cinnamon and smoke. Cheers. 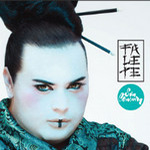 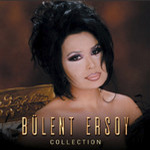 In my favoured combination, speaker control/drive via low output impedance, high current, minimal noise and wide bandwidth is assigned to transistors. Roundness of tone and colour plus that tell-tale fluid progression through time are maximized by the preceding filament-driven triodes. In that first position, they are put on cruise control to solely focus on beauty not hard labour. Once the critical noise issues of the triodes are handled successfully, this combines 'masculine' and 'feminine' sonic attributes in a most happy medium. (For the exact opposite, I recommend for your reading pleasure the two supernatural comedies by T.J. Brown – The Unhappy Medium Vol.1 and 2).)

Moving beyond gender duality is a slow process. How about Vinnie's design evolution? With beginnings as electrical telecom engineer for Lucent, we remember him as mod man of earlier iPods; as off-the-grid proponent of battery-powered components; as ultra-cap'd LIO tamer and modular man. Given LIO's successful promotion of ultracaps, prospective buyers might wonder. Why do his more advanced L2 models abandon them again? "The L2 preamplifier and monos in no way invalidate or depreciate LIO's ultracapacitor and modular concept. I'm still building LIO orders and enjoying new customers. LIO has been going strong since late 2014 when I introduced it so it has been four years already.

"The L2 components are in a higher class of performance which naturally comes at a higher price. For the L2 Signature Preamplifier, I wanted to push the DHT linestage approach to an even higher optimized level which wouldn't be fully modular to scale up into an integrated amplifier. Modularity is limited to line-level DAC and phono options. If the L2 were not based on direct-heated triodes, an ultracap-based supply would have been highly considered again. Compared to LIO's Mosfet amp, the L2 monos put out more power on a split supply of ca. ±48Vdc, thus nearly 100Vdc rail to rail. This would have meant many more ultracaps in series to result in higher ESR or equivalent series resistance. And that would have made one of the attractive things about using them less so. While larger higher-capacity ultracaps nearly the size of Coke cans do exist to maintain very low ESR, I would have needed 40 per bank, so 80 for two! That would have meant two very large amplifiers at significantly higher expense. Instead I opted for a high-current linear power supply with built-in AC filtering, a custom-made transformer for better load and line regulation with lower hum than most off-the-shelf types, very low ESR rails and a wide-bandwidth amplifier circuit that has its own high power supply and common-mode rejection ratio." Now we appreciate why L2's power supply concept had to diverge from LIO's. Different jobs, different tools. On the subject of tools, January 1st 2019 added the L2 isolation base with four Stillpoints Ultra Mini footers.

"The Stillpoints Ultra Mini feature one ceramic ball bearing that acts as a vibration isolator to reduce the transfer of vibration to the audio component. It is a bidirectional isolation device that has no direct vertical path through it. The reduction of mechanical noise to the component delivers improvements such as a greater sense of space around instruments and performers, more low-level detail retrieval and stronger microdynamic shadings. The L2 isolation base is solid CNC'd aluminium bolted to the bottom of the component. As with the enclosure, it was designed by the Evett Design Group & Vinnie Rossi. It looks fantastic and adds a more substantial and premium look and feel." 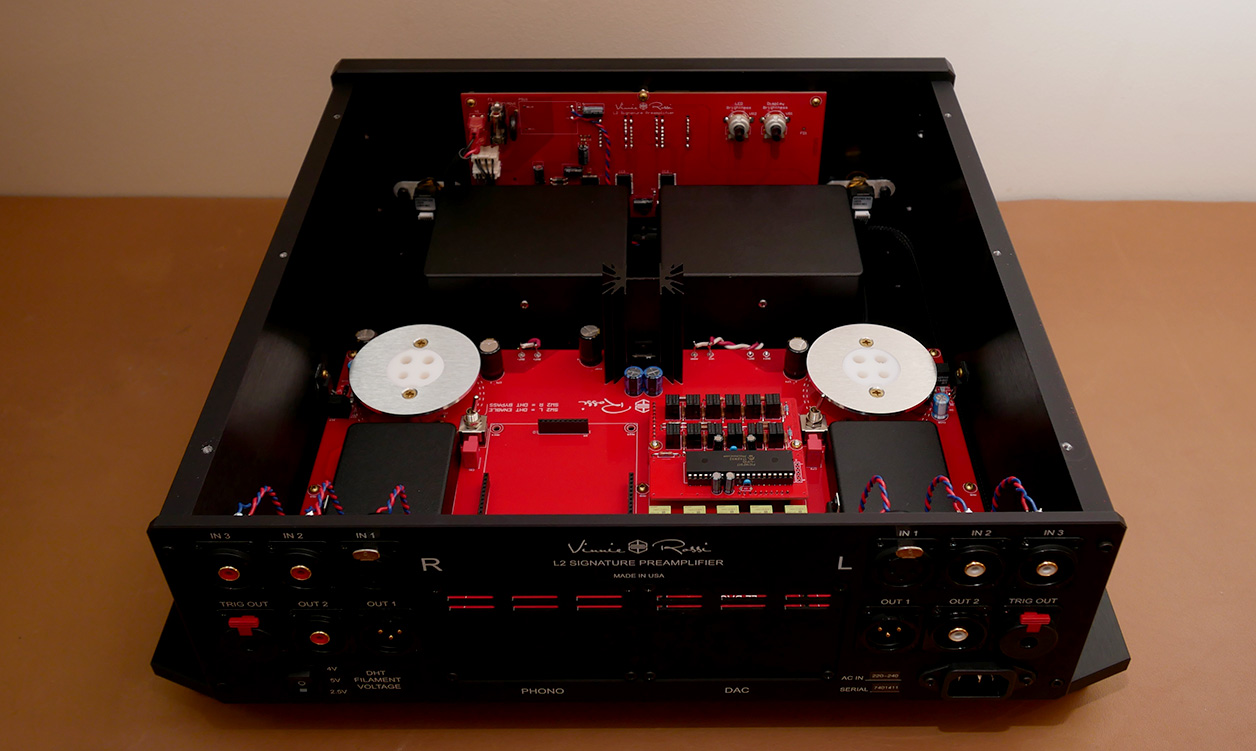 On how Vinnie generates true XLR i/o around his single-ended core circuit, "I don't use transformers but active line driver and line receiver circuits. This had nothing to do with cost savings where the Belleson super regulators used for this stage aren't cheap. It was about maintaining the very high bandwidth and stable i/o impedance across this entire bandwidth without introducing additional distortion to the spud circuit. The pure sound of the spud circuit dictated everything. It had to. It's the entire reason of this preamp's existence. So using active circuits for the BAL/SE and SE/BAL conversions made more sense." Thinking folks understand that the simpler paths are the single-ended connections. They don't pass through the additional stages. Where sources and/or amps sport XLR socketry, one should experiment to not automatically assume that going all XLR is the best foot forward. The exact same is true for our Nagra Classic Preamp where the balanced connections are generated by transformers. In their own show demos, Nagra never use balanced. 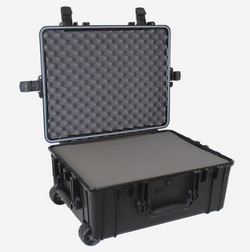 Not pita bread. Talking us through the guts, Vinnie hints at the pains it took him to perfect this circuit. "Some things you'll see in no particular order: a donut-shaped aluminum plate attached to each of the two Yamamoto Teflon tube sockets. Via standoffs that also attach it to the chassis, this plate connects to AC ground. When you place the wire mesh tube covers over the bottles, the edge of the cover labeled 'down' which you place onto the aluminum plate is unpainted. It electrically connects also the tube cover to AC ground. This shields each DHT from radiated 50/60Hz pickup on their anodes. The mesh covers simply rest on the metal plates to make contact. No need for screws which could drop into the unit and cause trouble so tube rolling is very quick and simple.

"The 3-way rocker on the rear panel simultaneously changes the filament voltage of the two custom-designed Belleson SPZR super regulators used for filament heating. This too makes rolling between different DHT families like 300B, 2A3 and PX-4 easy. Set the filament switch to the appropriate voltage, install the tubes and tube covers, power 'on'. Warm-up time is 25 seconds. A few of those same Pickering reed relays used in the stepped attenuator are also used to set the filament voltage directly at the SPZR regulators by changing the Vset resistance for the regulators.

"The filament switch itself is only used to control those relays. This avoids running any filament currents to this switch because the power paths for the filaments must be very short. I kept them less than 2 inches between SPZR circuitry and tube socket. This keeps away any hum/noise pickup from the sensitive filaments of the DHT circuit. The Belleson SPZR filament regulator circuit for each channel requires an external transistor. That attaches to each of the two thick aluminum side panels of the enclosure for excellent heat sinking.

"You'll also see an impeccable dual-mono layout of the 4-layer motherboard as well as two large black metal covers for shielding sensitive parts of the DHT and Jfet stages as well as the balanced i/o stages. Going with a 4-layer PCB meticulously routed by a true layout guru whom I commissioned for this was absolutely critical in getting the noise floor this low. It allows us to route sensitive traces between ground planes and allowed for different ground planes inside the layers.

"For example, the power feed for all control circuitry—relays used for input select, volume control, DHT filament voltage selection as well as the front panel display, push buttons, IR etc.—is sourced from a dedicated 5V linear regulated feed and its own isolated ground called DGND. There are multiple isolated grounds within the 4-layer PCB: analog ground left/right, digital ground for the control circuits, DHT ground for the left/right filament power feeds and AC ground aka chassis ground which ties to the safety ground of the AC cable and mains outlet.

"How I taught myself to 'reference' these various grounds against each other so to speak—except for digital ground which has nothing to do with any of the analog circuitry—was another essential piece of the puzzle in getting such remarkably low hum and noise. I didn't figure it out overnight. It happened gradually over the course of experimenting for many months well after LIO DHT PRE had gone into production. This really was the hardest part of the whole L2 Preamplifier design. Many nights damn near led me to insanity!

"Another thing I learnt is that a floating filament supply like a battery or isolated ultracap bank is not the best solution against hum pickup. While the power itself is very clean, things are a lot more complicated in terms of picking up radiated noise fields with the filament-driven triodes. Certain tubes I gave up on with LIO like the Psvane WE205-D Western Electric replica due to excessive hum are quiet in the L2 preamp."