As inevitably as 1+1=2, what follows is that the Vox 3a attains our ultra-rare Lunar Eclipse award. Crossing paths with something like it is as rare. To appreciate this in its fullness simply requires that you revisit my prior Vox 3f review. The 3a is all that plus today's comments. That combined story is 18 pages long. From a true auteur who works out of a modest chalet in the Swiss Alps around Gstaad, with solid-wood cabinetry crafted by the country's most advanced traditional wheel wright, there are purpose-designed carbon-fiber woofers not seen anywhere else. There's a sensitivity-matched Raal ribbon super tweeter to avoid shelving resistors, then enhanced by custom bronze plate. Finally, the pièce de résistance: a one-of-a-kind small widebander with paper cone, black nylon phase plug, pleated fabric surround, bronze basket and AlNiCo motor. Add bronze-mesh grills with rubber retainer rings, an integral desktop plinth, optional stands with anodized bottom plate/leg or wooden leg. It all shows near fanatical attention to detail. It demonstrates leave-no-stone-unturned willingness to pursue lengthy R&D for custom solutions wherever Martin Gateley deemed it necessary or desirable. 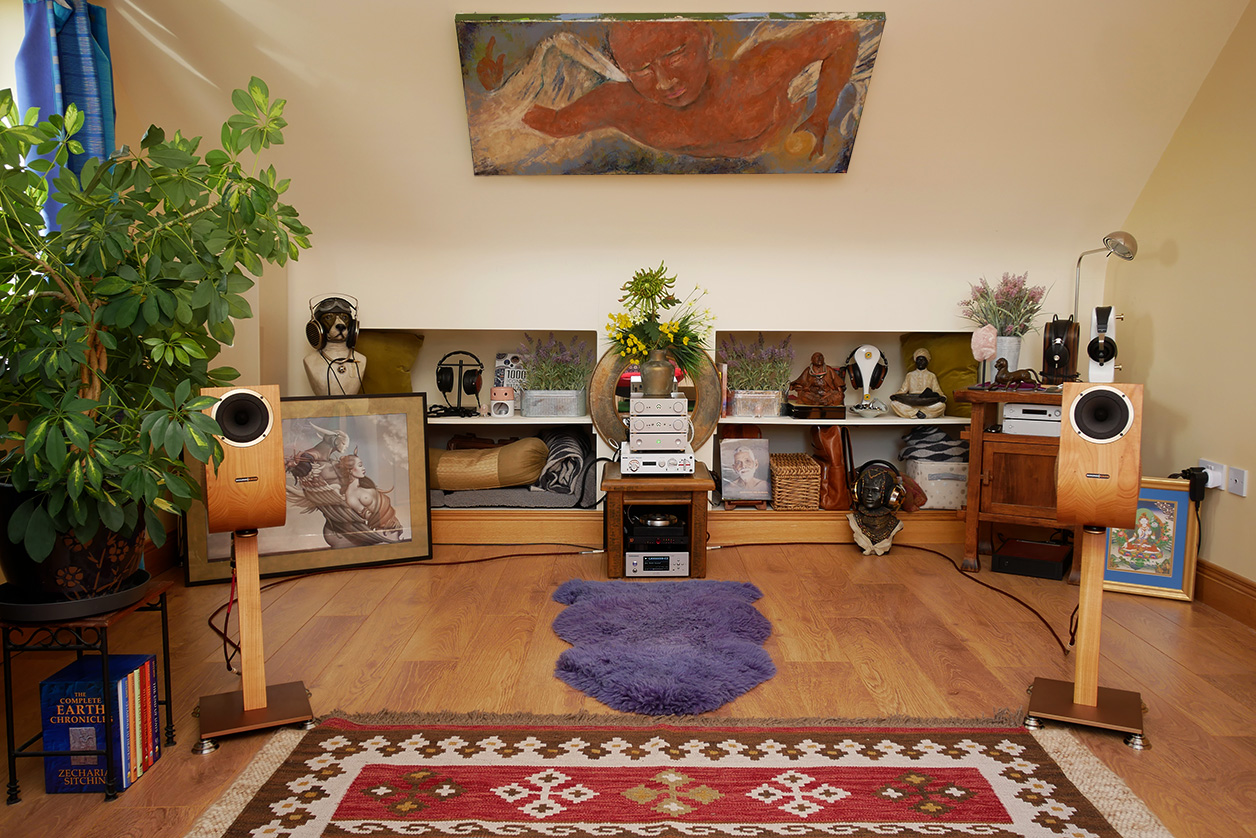 Obviously his compact still won't move sufficient air or fully plumb the depths in a manse. For that sound|kaos have far bigger more appropriate artillery. Meanwhile in a room 4x6m or less and to non bass heads, anything more than the 3a is acoustic and visual overkill. Owning a Zu Submission subwoofer, I naturally tried it. For low synth bass, big drums and infrasonic beats or pedals, just a bit of 1st-octave assist—mocked up with a 4th-order low-pass set to 20Hz which still bleeds through above 40Hz even though very subdued—became icing on this cake. In many ways the Vox 3a is a Bronze Age creation. There's plenty of actual bronze here to warrant the pun. But there's also a return to a slower far more artisanal time that was about unhurried hand crafting and thoughtful detailing like these convex grills with rubber rims. Most i-Times folks would have done them far simpler and cheaper. They wouldn't have thought of the clever decoupling scheme between speaker and plinth/stand. They couldn't be bothered with different metal anodizing to complement different wood species in a low-volume enterprise. They'd apply a black-fits-all approach and call it a good day. They'd use MDF with thin veneer. They'd use off-the-shelf drivers without a second thought. They wouldn't struggle with oversized premium filter parts. They couldn't possibly concern themselves with 'mythical' AlNiCo properties or any wacky advantages which one-up bronze baskets might hold over cast aluminium or stamped steel. After all, the only way to find any of this out isn't modeling in software. It's trying out physical samples. Since those won't exist, you have to get them made before you know whether they conform to your ideas and hopes. It's entirely unreasonable. It's for devout renaissance men, not hard-boiled business men.

None of it is necessary. Adding it explodes costs. But that isn't today's question. Our question is, is this whole lot desirable? 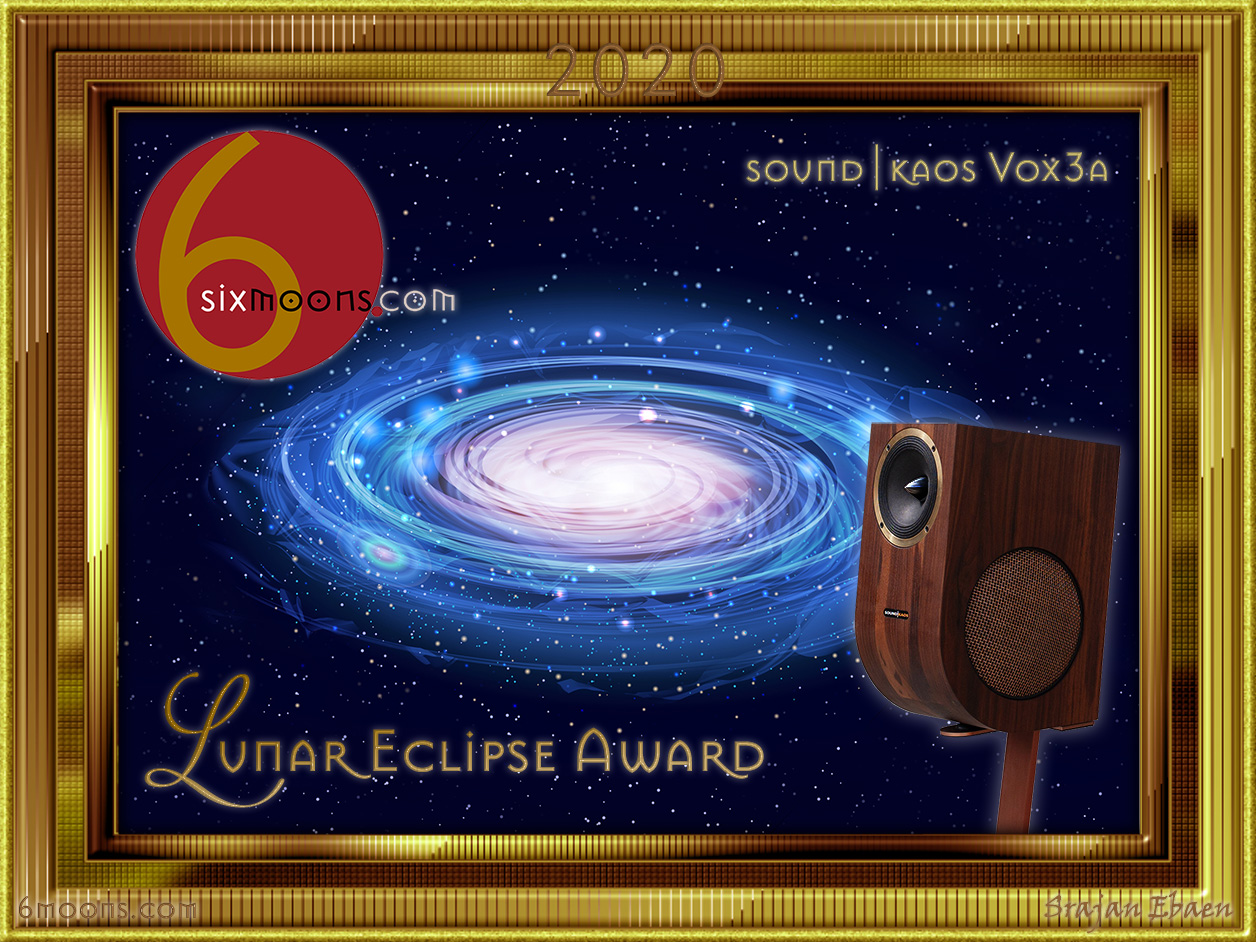 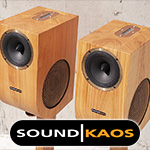 Do you treasure sophisticated tone with extra-expressive timbre modulations? Do you happily pay more for a few degrees of extra projection intensity? Do you own the necessarily advanced equipment to maximize these advantages? Do your musical choices reward this special attention on timbres and emotional content? Do you appreciate noble materials and that such efforts are disproportionate to the gains over the already high base line marked out by the Vox 3f?

If so, the question of desirability just answered itself with a solid 'yes'.

Having followed Martin Gateley's work since his very first trade show participation in the autumn of 2012, I think that the Vox 3a is his finest most successful creation yet. That's why it demands our Lunar Eclipse award! 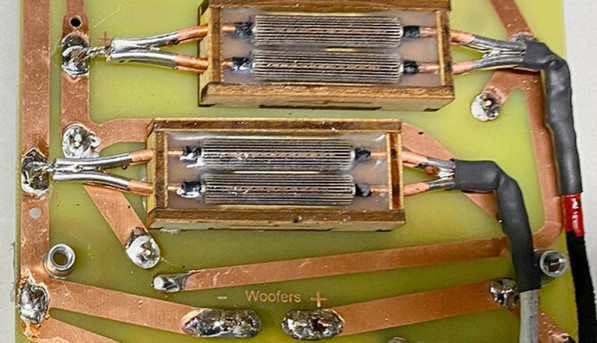 Postscript. By September 2020, the 3a and 3f had grown an official new option with the 'fw' suffix. That's short for firewall. In my Aurai Audio Zero Junior review, I recounted how designer Alain Pratali had asked me about my experiences with LessLoss product. I'd singled out their firewall for speakers and emailed him my review link.

"I know what this is. It's really the best place for a mechanical low pass filter to eliminate Brownian noise, digital pollution, auto-magnetic induction and so forth. I believe they use carbon-sintered copper. It's very soft and very tricky to manufacture. But what really matters is understanding why we have such pollution in the first place, then how to remove it. I have a system at the output of my CD player which cleans up the signal of quantization noise. My analog circuit in the CD player is built around the same issue. I've been working on this for 30 years and have several answers for it. I even have it on the midrange driver of today's Zero Junior. Digital pollution is a real drama for performance audio."

Meanwhile Martin had received this: "One of my customers is in the commercial cable business and had this to say about the LessLoss Firewall which I thought you'd find interesting. "I really think that the Firewall units make sense from a physics perspective. What LessLoss have done is to exploit the order-of-magnitude difference in frequency between the usual sources of noise and the analogue music signal which is almost direct current by comparison. By tremendously increasing the surface area of a portion of the conductor, the high-frequency noise experiences an enormously higher resistance than the 'DC' signal and is simply dissipated into heat. Clever indeed! Of course they must have put a large effort into finding a material science lab that can make nano-level surface structures.""

In short, the 3afw or 3ffw have these modules hardwired to their crossovers as shown.