Not the sacred number. Nor a private investigator even if to readers, reviewers are a kind of PI. No, this was about projection intensity. It's a peculiar quality. Without moving the soundstage forward—this one remained far behind the speakers—it projects its 'essence' forward. It's how an inspired presenter reaches the far audience seats. Instead of drifting off, their occupants remain engaged. It's like a charismatic person entering a room. They immediately project a kind of magnetism to which our attention affixes from afar. This the 3a clearly did better than the 3f. Already in school an 'a' was a lot better than an 'f'. 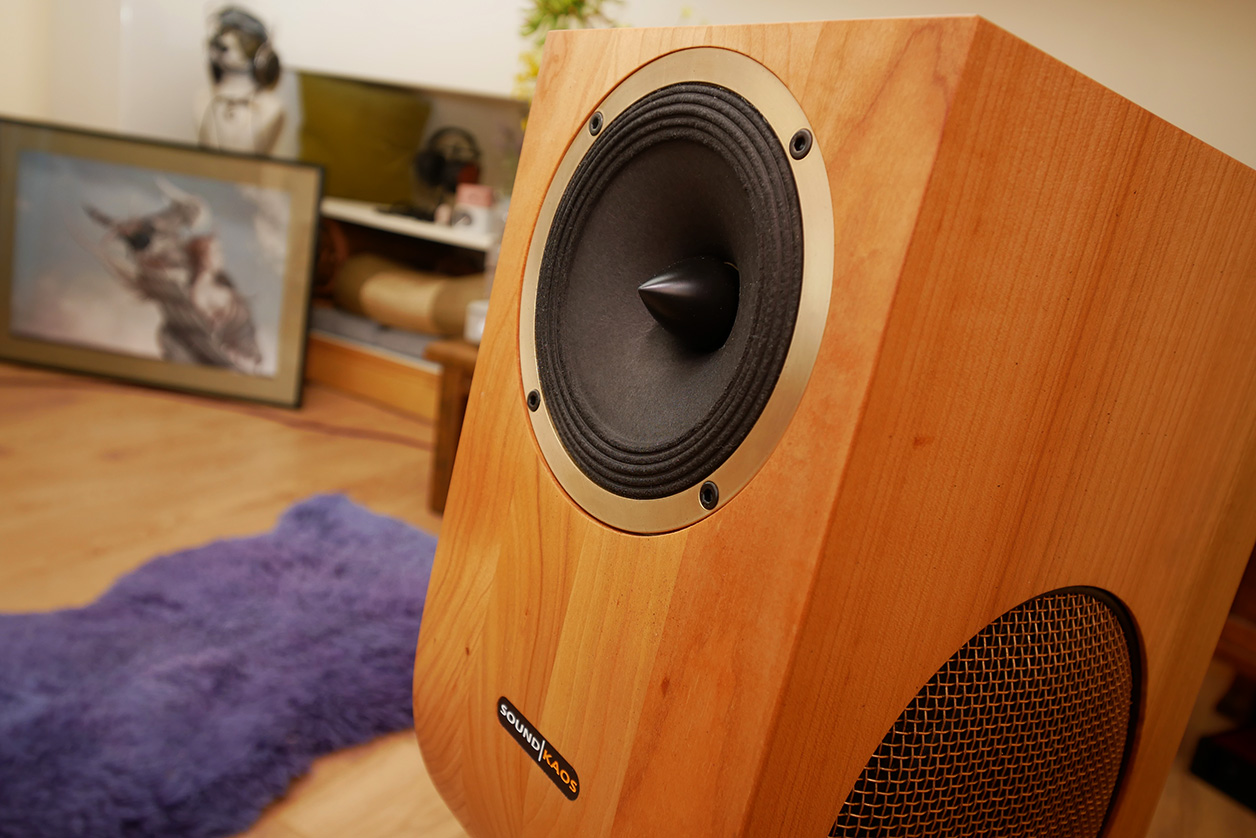 Interwoven with this PI number was very specific tone. It's the thing Bernard Salabert of PHY pursued and demonstrated during a visit to his atelier in Southern France. Modern Lowther types like Voxativ, Rethm, even Cube, pursue speed and very high clarity. It's what gives them their signature startle-factor directness. This small Martin/Armin driver with pleated surround follows Salabert's trajectory instead. But it adds a superior top range to his style of 8" or bigger widebanders. And that injects just a dose of Cube/Voxativ-type speed into the presence region without getting shrill. Calling this tonal quality noble is as convenient as after-the-fact prophecy which hides conventional foreknowledge. I knew about the many bronze bits well prior. I wrote up AlNiCo mojo as a quantifiable behavior of magnetism that's different from ceramic or neodymium. The solid wood cabs are obvious. It's easy to create a self-fulfilling prophecy from associated expectation bias. Ivette just knew none of it. She'd heard the Vox 3f before. Now she sat in front of speakers that to her looked the same, just in cherry not walnut. But they did not sound the same. Using contrast to call the 3f more conventional or somewhat peasant-y is perfectly factual. It just doesn't describe it.

For a more useful attempt, think shininess. It's one way of talking about what distinguished the 3a from the 3f's flatter drier more matte gestalt. Shininess isn't mere sheen of surface gloss. It's inside out. It's comprehensive and far-reaching. It segues back to projection intensity. Charisma. Unlike light which is immaterial—while it causes shine, it weighs nothing—this sound had chewiness and robustness. It just wasn't thick or sweet like vintage valves. A dose of 'Lowther' speed meant dynamic reflexes which gave elegant noble tonefulness its projecting energy. With it came two related observations. One, music over the Vox 3a communicated. Communication bridges distance, holds attention, thus nourishes. Two, the content of this communication had substance and surprising gravitas. Practically, it felt as though I was being talked to. In musical terms, I'd find myself being serenaded. Whoever does any serenading always has someone specific in mind. It's about intention. And perhaps that's the operative word behind this peculiar process of projection. Because it's not part of any hifi graphs I know of, measurement fans might insist that this quality doesn't exist. I say it does. We might call it not a casual but determined purposeful sound. It means to hold our attention, to communicate, to bridge not just the physical gap between chair and system but most of all, the far bigger abstraction which is playback in the first place. 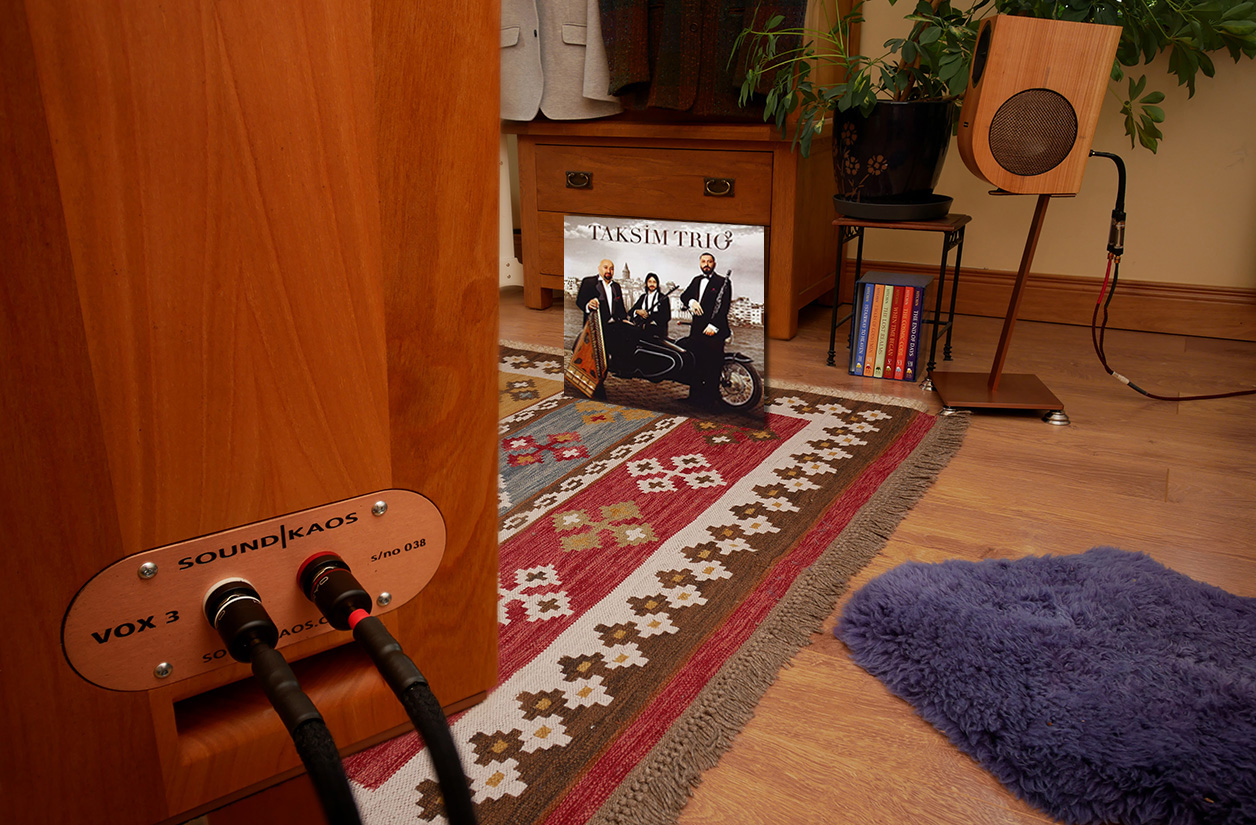 In terms of engagement, involvement, tonal nobility and elegance then, the 'a' version brought the familiar Vox 3 concept to full bloom. The fascinating thing is, if you can't measure this particular quality, how does one chase it? How does one learn what serves it, what works against it? Whatever the learning curve, I'm certain it can't be taught. It must be won the long hard way of endless trial & error. My takeaway is that Martin Gateley and Armin Galm have done what nobody other than Camerton have yet: a proper small-diameter here paper-based widebander sans whizzer that celebrates shiny tone, dynamic maturity and the breed's signature coherence. Where other widebanders go for 8-10"—Cube are refining a 15"!—sound|kaos went the other way. They always intended to separate out their bass to purpose-designed/matched woofers. Now the tweeter/midrange can be smaller to introduce its very own advantages and challenges. It's a different concept which sounds different. But boy does it work a treat!

For those who need more, let's compare 3a/3f side by side, with the 3a using equivalent wood legs at first and no Hifistay floating footers to eliminate those variables.