Asking Martin what he views as AlNiCo's advantages, "in short, all AL I've come across seemed to have a smoother more singing quality than ferrite and neodymium. Like the guy below says, 'scooped sound, sort of fuller, richer and more flowing'. One track I always play is Gianmaria Testa's "18 Milla giorni" from his Testa at work album. It has a guitar intro that really brings out the Alnico twang as I call it. To me it just has a magical feel. The following comment 'the voice coil moves less' certainly seems true with the Enviée whose Xmax is ~3mm. I of course wondered why an AlNiCo magnet might have an edge and found the following on Ted Weber's site. Pretty interesting stuff. It confirms some comments we've all heard about AlNiCo's better frequency extremes and ability to play louder without distortion."

"The whole 'Alnico mojo' is about smooth compression at high average levels such as you'd have running an amp flat out. AlNiCo (aluminum-nickel-cobalt) is an alloy magnet and all alloy magnets are easier to demagnetize than comparable ceramic (strontium ferrite) magnets. What this means is that as the voice coil starts moving in response to the input signal, it generates a magnetic field of its own which tries to demagnetize the magnet. As its effect lowers the available magnetic field of the AlNiCo magnet, the driver becomes less efficient and its voice coil moves less. The physics of it are that the small magnets near the surface of the poles called domains begin to change state or flip direction. The result is smooth compression, the same kind of operating-curve compression that occurs in a tube amplifier." 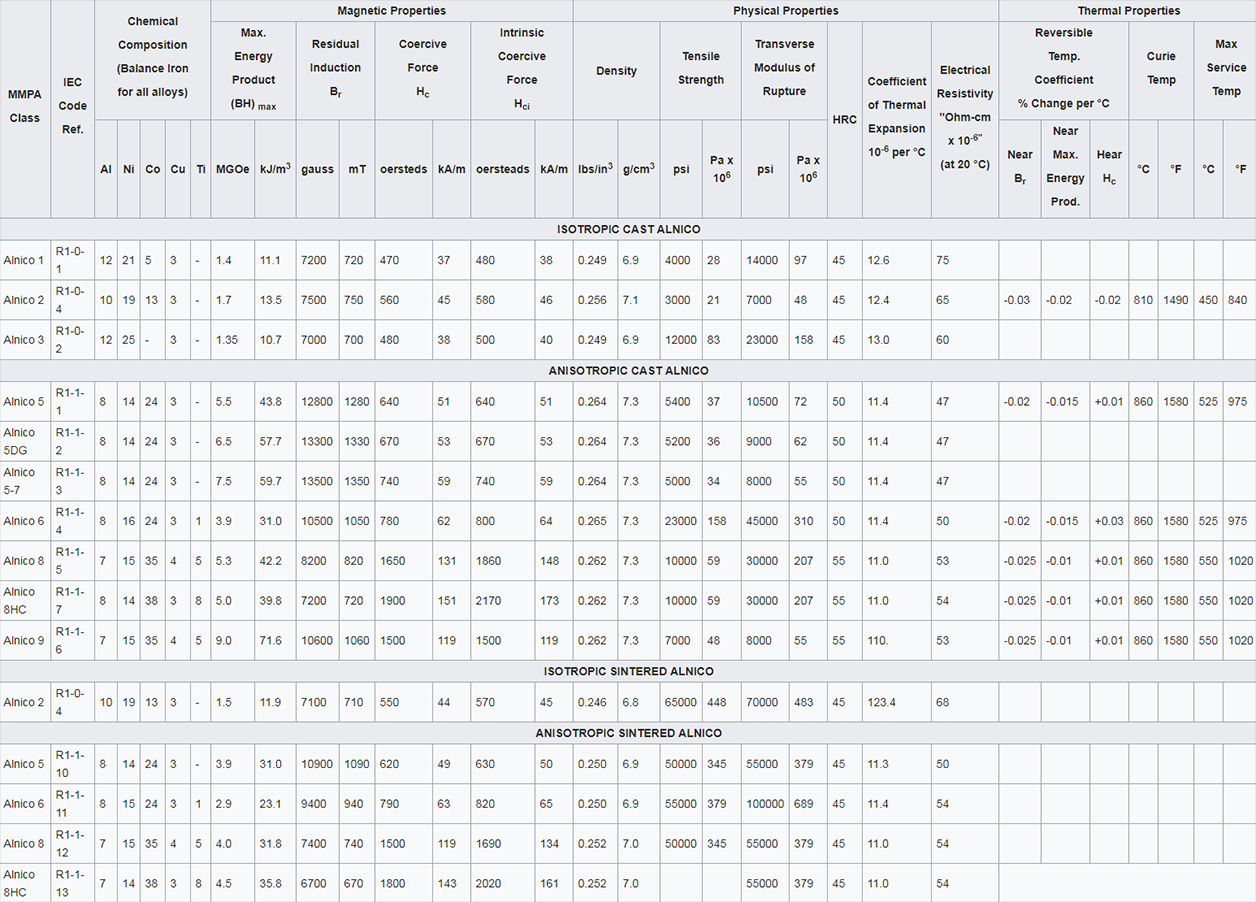 AlNiCo comes in different compositions and with different properties.

"The ceramic magnet on the other hand doesn't compress or demagnetize as easily so the voice coil moves to its mechanical limit and won't go any farther. This is why some players say that ceramics sound a little edgy at high average levels as opposed to AlNiCo. However, by properly designing the entire magnetic circuit, ceramics can be made to behave quite well for desirable guitar-amp tone and dynamics. You might compare these two magnetic circuits to solid-state amps versus tube amps where the solid-state amp gives you all it's got then clips hard while a tube amp compresses nice and smooth. The extension of this idea is that with the AlNiCo like the tube amp, you can seem to have a louder average volume since it compresses smoothly. But the compressing or demagnetization that occurs with AlNiCo is not permanent. It springs right back to its designed operating point."

By mid September 2019, I'd asked Martin about their driver's progress. He returned a German PDF from Armin. Its purpose was to document measurable differences between fitting the driver with a CNC-machined aluminium or bronze basket using a B&K 8309 accelerometer with matching 2511 resonance meter. Martin's curiosity wanted to know whether bronze or aluminium was better.

The following three measurements were generated in 1/ free space, with the driver supported by just its magnet; 2/ bolted to a 50cm² baffle; 3/ installed on an IEC baffle. Armin explains that to properly interpret these results, one must account for the differences in material density (aluminium is 2.8g/cm³, bronze is 8.7g/cm³) and Young's modulus (70 vs 115GPa respectively). The blue lines represent aluminium, the red bronze. As you'd expect, bronze exhibited more ringing above 10kHz but below performed generally a bit better. Equally true, both materials show very pronounced resonant behavior which is damped down some once mounted to a baffle. How would this behavior change once the driver was built into a box? What would Martin prefer?

"Bronze seems the way to go even though Armin called his measurements inconclusive. But he would. He's a measurement guy. I remember having the exact same reaction to the Etalon speakers in Munich a few years ago and the first time I heard Bernard Salabert's Phy speakers. Both had bronze baskets. The first time we heard Armin's 4" prototype, Ursula and I looked at each other and said, that's it. I'm convinced it's down to resonant frequencies. Just think of how many different materials there are in a speaker build. You end up with a cacophony of resonant frequencies going off throughout the bandwidth."