An educated guess calls Aarka's widebander higher in resolving power than Bhaava's, lower than Maarga's. I'd make our monitor less software fussy than Rethm's bigger guns; which is exactly what I heard. Aarka's single front driver acts as point source. Like KEF's dual-concentric LS50, it supported very specific imaging. Unusual bass extension heightened venue physicality when recordings allowed. This dreamy number from the Jopek/Marsalis venture Ulotne did. Aarka thus cast an exceptionally deep and wide stage whose layer separation was good but not extreme. Slight softness of edge limning tied to gentler focus and articulation, hence not the hyper-enunciated precision of an ace broadcast anchor.

Even an ultra-bandwidth DC-coupled speedster amp like our Bakoon didn't turn this widebander haggard, sharp or incisive. Aarka's gentler textures and big bass infused the musical action with a certain warmth. To my ears, this signaled the earlier called-out change of Rethm's signature voicing. Aarka no longer was about max resolving power in the upper mid/lower treble bands, about acres of air and a slightly ethereal suspended mien. It's as though a certain spiritualized orientation had gone earthier. That for Rethm I'd first meet this ripening into a more stately fuller gestalt with a half-sized monitor not floorstander was unexpected. Generally monitors behave quicker but less weighty and dynamically more genteel. 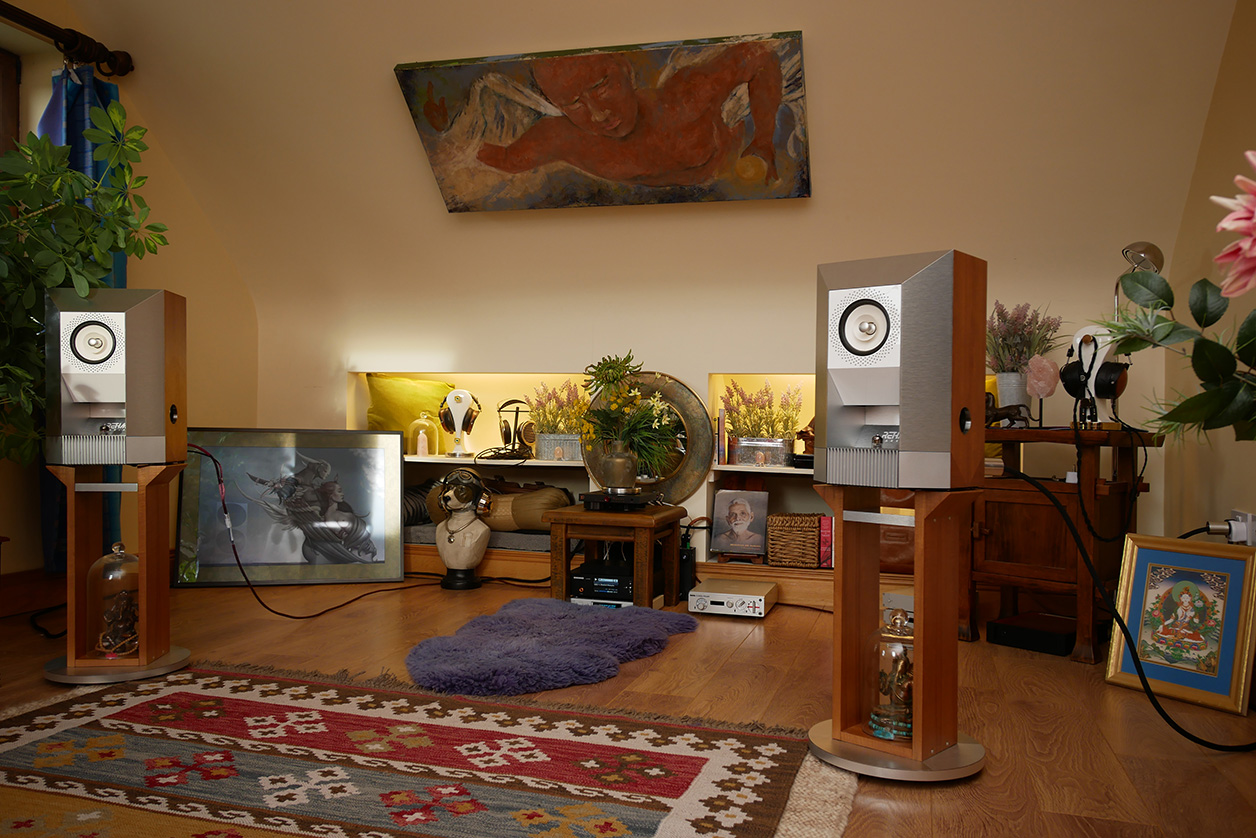 When we consider the acoustically unused space of its stand, Aarka only looks half full. But sonically, it extends all the way down to the floor. That glass is filled to the brim. It's why rather than treat it as a wall-hugging monitor to exploit boundary gain, I set it up in free space like I would a tower. As Jacob admitted going in, it's really perverse to expect a miniaturized speaker to act like a big one. But people do and Aarka's phase plug meets them on the nose. As unlikely as it reads, this is a widebander that will rock. At that it's so successful that I wouldn't be surprised if eventually, an equivalent floorstander scaled up to four or six line-source woofers on its back. This new bass recipe works a treat!

To demonstrate bigger material, Shulem Lemmer's pure reading of the famous "Avinu Malkeinu" ladled on the proverbial sauce with backup chorus and orchestral forces. That had real chutzpah. To stay in the same mood…

… I followed up with Levy Falkowitz and New York's Shira Choir. We often forget that passionate communal song was at the heart of many religious practices. Be it gospel, kirtan or a hassidic gathering, the emotional power of circular vocalizing is well known. It's not about abstract beliefs where religions are at loggerheads. It's about a deepened heart space where we can share our common humanity and reach the starts while our feet never leave the earth. Big words for a small speaker but it really was quite epic.

To shift gears and travel to modern crossover India as captured in an all-night improv session in a Polish recording studio, Debashish Bhattacharya's new Joy:Guru offered the perfect instant ticket. As expected, Aarka slightly toned down the pungent glassiness of certain sympathetic string attacks of the slide guitar in favor of more guttural weight mirrored by Wojtek Traczyk's upright bass. A good hifi is a kind of personal time/space craft and Aarka's tank was full of fuel ready to go anywhere.

Of course anywhere is rather non-specific so…