Internal:external. For the first A/B, internal amp meant Nagra's Classic preamp to control a Questyle CAS192 DAC's volume. Bakoon played the external part. This pitted exciting hi-rez against plump soft comfort sound. The short form of this match? Aarka was far more capable than its own amp let on. If you own an amp of Bakoon caliber to tap far deeper insight, energy, separation and immediacy, you'll want to bypass Rethm's after one cut. It's that much of a gap. At €6'000 extra, this was no surprise. It just showed untapped potential which an Aarka owner will want to know of. It begged the question. How far could Jacob's own amp go? For one answer, I replaced the AMP-13 with our €2'500 MkII combo of HP100/S100 Stello from April Music. After nearly two decades on the beat, these remain my favorite budget twofers. It's why they've accompanied us until now whilst lots of other stuff has found new owners. 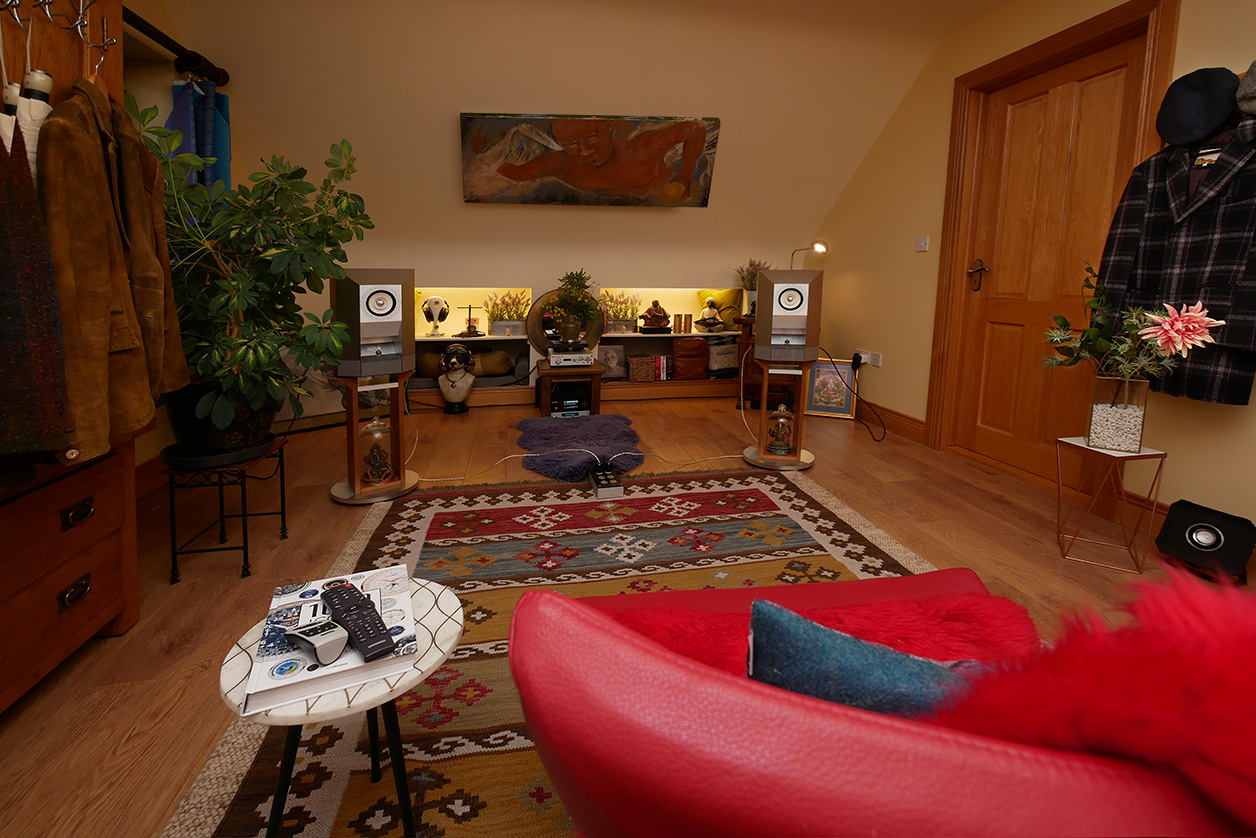 Though itself warmer, slower, softer and less resolved than Bakoon's, the Korean Mosfet amp still put Jacob's far in the rear-view mirror. It was grippier, quicker, more direct, assertive and resolved. Using the best-case scenario of Bakoon as reference, Aarka already felt fully awake on the Stello. Its own amp still had it act sleepy. Based on this, I'll call the built-in unit a starter amp. It gets you going like a freebie power cord. But more critical and experienced listeners can easily do better. As our vintage €1'250 Stello S100 MkII showed, if one shops smart, this needn't cost that much. A 25wpc Gainclone could be another destination. 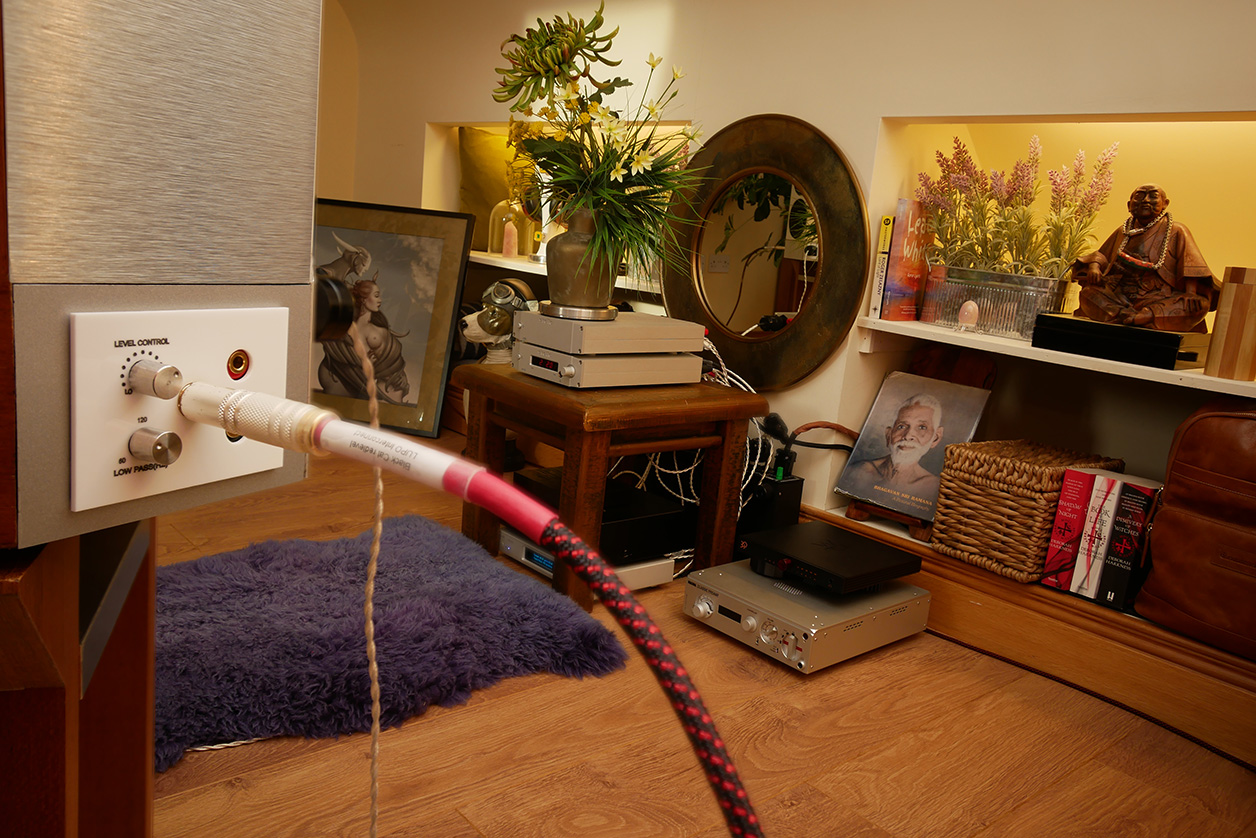 Following 'once heard, never unheard', my serious listening sessions bypassed the internal amp. Given how good Aarka could sound without it, why play in a lower octave? Jacob's speaker design chops to me were on a far higher plane than what budget and physical space allowed him to build into Aarka as a driver for the 5" widebander. This doesn't invalidate Aarka's turnkey appeal of connecting it by interconnect not speaker cable. It just calls it an interim step toward exploiting the speaker's true potential with a superior external amp. Now we talk about that.

Aarka shifts Rethm's portfolio. Once Jacob relinquished single drivers to extend bandwidth with active bass, he always loaded his woofers through a line/reflector so they'd mimic his widebanders' loading. Aarka is the first Rethm with direct bass. Its woofers face your room without first pushing air through internal chambers. With it, Aarka has equalized the speed, power and directness of its low end with that of its main driver. That's a clear advance over earlier Rethm bass, so much so that any proper discussion of Aarka sonics now must start there. Before we do, let's acknowledge how Holger Adler of Voxativ too has an opinion on the subject. He views the integration of active bass with widebanders of high sensitivity hyper critical on speed. It's why he champions Ripol™ subs with dual high-efficiency woofers in a specialized form of isobaric dipole loading. Cube Audio's latest are sealed side-firing subwoofers. It remains to be seen how those integrate with their own widebanders. But the subject is clearly in the air. Back to Aarka…

… one can now play dub with big bass like this Desert Dwellers remix by Kalya Scintilla without making excuses on power, extension and control. As far as our perception is concerned, indirect bass which first travels through chambers couples differently to our room. Its shock-wave impact diminishes. I feel the same about downfiring subwoofers like our Zu Submission. Even though Aarka's woofers fire back and not at the listening seat, the sensation of impact with its byproducts of snap, incisiveness and fast not slow/delayed timing was clearly higher than previous Rethms had I reviewed. Now the power region of the upper bass considered the engine room of musical momentum—classical martial arts would call it the hara chakra in the belly—is fully turned up. It exudes vitality and kick. Allied to Rethm's signature spaciousness, filigreed airiness and energy density in the presence region, Aarka had gained proper grounding. With it came a new earthiness and ability to rumble. Look at the very modest enclosure volume which these woofers operate in. Something doesn't quite add up. Just so, reviewers are tasked to call it as they hear it. Leave the 'how' to the actual engineers. All I can say is that Aarka's bass didn't just tick off as an also-present entity to be counted then forgotten. It asserted itself as a main draw. For Rethm, that was news. Whether it'd hold in our bigger room was the next question. But for the upstairs 4x6m space, it laid down the new law. I reached for ambient, dub, trance and organic electronica, then stepped on the gas. Suddenly Rethm spelled groovy Rhythm in big bold neon letters.

It was precisely this surprising bass quality which had me replace Jacob's softer blurrier tube-buffered 10-watt class A amp with one that had the majority bandwidth equal to his active bass on snap and speed. From our options, here the Bakoon was king so reclaimed its seat.