Before we learn more about the Rethm, consider what else the market offers on a similar score: the Boenicke Audio W5, sound|/kaos Vox 3 and Gravelli Bespoke Audio Virtuoso. The first two are from the land of not milk and honey but chocolate, cheese, watches and banking. The last one is from Czechia, thus also one of the last bastions of boutique Western tube manufacture. Think KR Audio, Emission Labs and EAT. All of these share widebanders and sidefiring woofers. Here widebanders don't mean full bandwidth from a single driver, just drivers of unusual range to cover tweeter/midrange turf on one cone. Gravelli's BMR or bending-mode radiator nixes a tweeter, then offers far superior off-axis response. Boenicke's metal cone widebander gets a ¾" rear-firing super tweeter assistant. sound|kaos' widebander looks not in that rear-view mirror but through the sun roof at an upfiring Raal ribbon. That adds air, upper harmonics and 360° dispersion to counter a widebander's beaming. 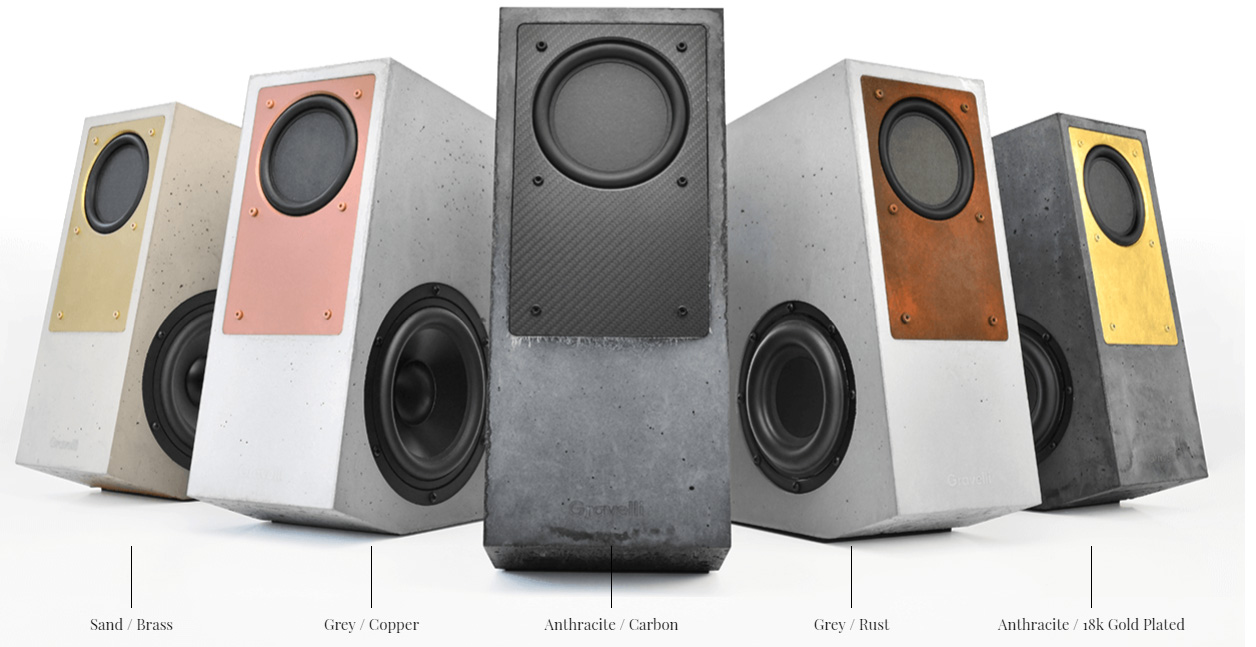 On numerology, the W5 gets one 5" woofer, the Vox 3 two horizontally opposed 5-inchers, the Virtuoso one active 5er plus a bigger 7" passive also in a V-twin layout. On material science, both Swiss do it in solid wood, the Czech as a cast polymer/concrete composite. On MO, both Swiss do it passive, the Czech class D fully active to become a complete system in a box. On options, all of them abound, be it different wood species, concrete tints or baffle insert finishes.

On price, none of them are cheap or entry-level. But on décor smarts, look-ma-no-speaker Houdinis and contemporary appeal, they all ace it big to blend into your lifestyle, not stick out like sore thumbs.

"If a monitor speaker is placed on a credenza or other piece of existing furniture, it makes perfect sense. Naturally ours had to be no compromise even as a monitor. Gratifying was that the end product far exceeds our expectations. The monitor of today is unfairly compared against floorstanders ywt everybody expects them to perform at those levels. This is probably because most who buy them do end up using them as their primary system, not as part of a second study/library/bedroom setup. In short, ours had to live up to such expectations which set the benchmark pretty high.

"Our widebander is a variation on Trishna's 5-incher. We decided not to use a neodymium but ferrite motor. We lose about 2dB efficiency mainly above 3'000Hz which was a good thing that resulted in a much smoother driver which can be pushed harder without the treble becoming prominent. We had to walk a very fine line whilst building this driver to not lose the detail and life on top either. This couples to a 1.3m long mini labyrinth for horn loading. We still get 94dB efficiency, very respectable for a monitor. For the bass we did lots of prototypes with different driver diameters, isobaric loading, various chamber volumes etc. We finally settled on two 6" non-isobaric woofers set into the back of the speaker firing rearward. This gives us an effective radiating area slightly larger than a single 8" woofer. That coupled to a power amp does produce bass which will surprise. It works perfectly in my 450ft² space with 12' ceiling which isn't American-style lossy construction but solid brick and concrete. Keeping with my preference for sealed bass, the quality of the bass doesn't disappoint and has both a level and low-pass filter control. We have an RCA input when using the built-in class A amp and a pair of bananas for an external amp." With its rear-firing dual bass drivers, Rethm's monitor parallels the big Dutch & Dutch 8c.