For size perspective against two price-competitive passive monitors of equivalent bandwidth, here's Aarka next to the sound|kaos Vox 3f and Kroma Audio Mimí from Spain's Granada. 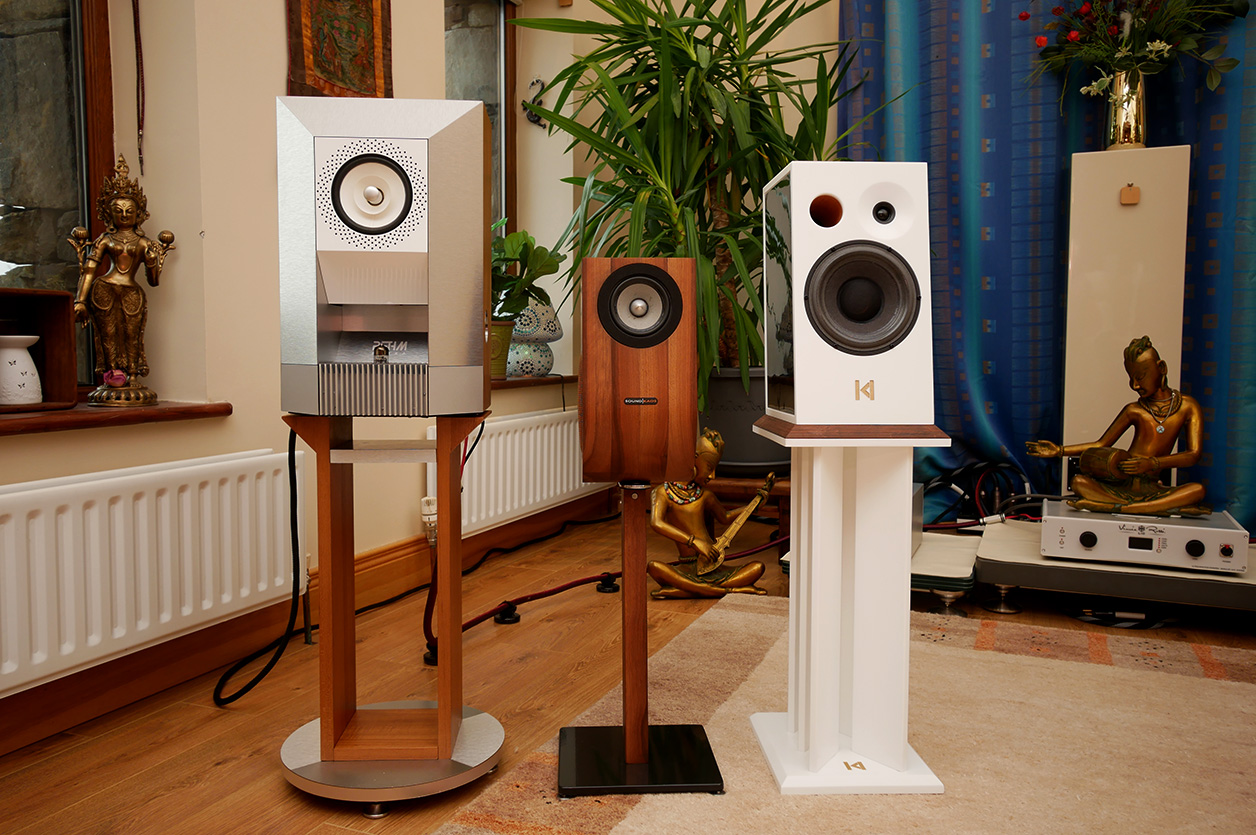 For a rollicking cut with bouncy bass and funky brasses across the 3'00" bridge, the Yara Lapidus album Indéfiniment has a peach in "No no no no t'en fais pas". Compared not to the ¾" Hiquphone tweeter in the Kroma—that's similarly soft like the Rethm—but the Mundorf folded ribbon of the Acelec, Aarka mellowed the track's snotty steely aspects. Aficionados of widebanders know their general propensity to go bright and ragged in the ±3kHz band. Here that was tamed and the vigorous AMT on its shallow 1st-order filter expressed more brassy bite and incisive edging. But Aarka showed higher dynamic cresting and over it, the pumping bass power of the cut had more oomph and air displacement even with my civilized touch on the bass attenuators.

The observant reader already pegged it a recurring theme. With its backside hiding real assets, Aarka is counter-intuitively fit to serve up trance, dub and other fare which a BuddhaBar DJ might play in a Mallorca or Marmaris disco. Dwellers of regular homes should find this monitor a perfect stand-in for bigger passive floorstanders whose fixed nature can't adapt to mood and taste with just a few twirls on active filter controls. Unless you set the low-pass to 60Hz, then starve these woofers with unreasonably heavy-handed attenuation, there's no way to make Aarka sound lean and lightweight. 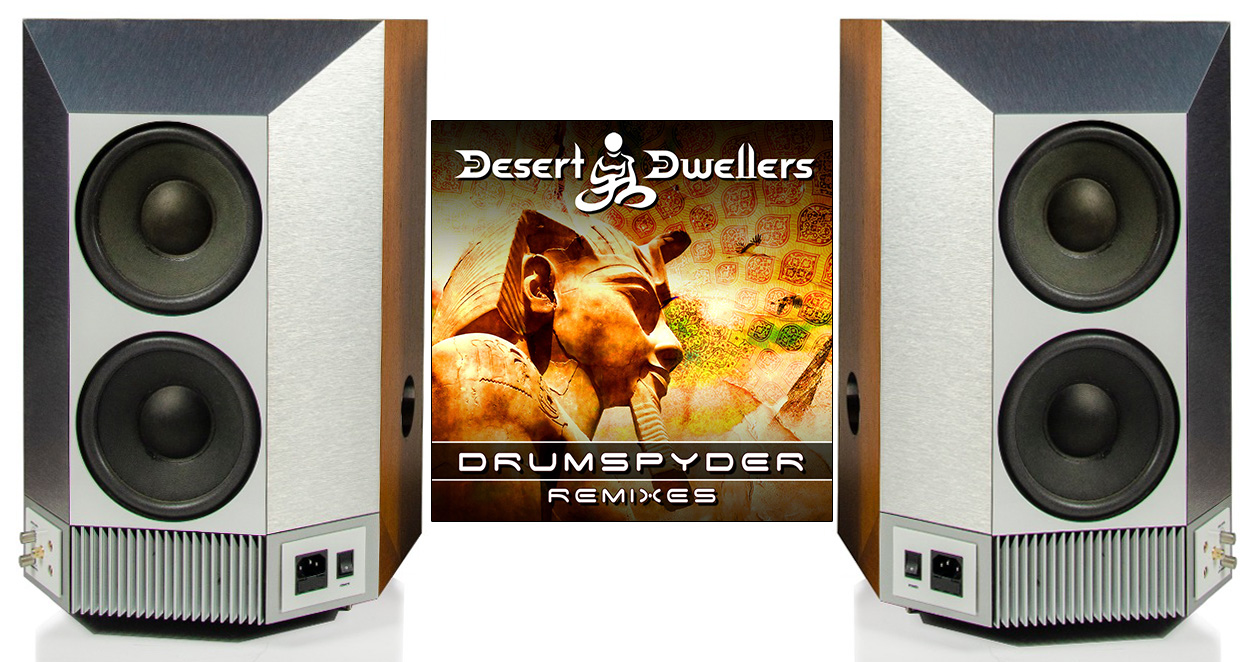 If you share my assessment that a top-down perspective of maximum air and speed speaks more to our visual/mental faculties whilst a bottom-up take of big bass and rhythmic propulsion tickles our gut and vital instincts, Aarka is first and foremost a fun speaker. Which flies in the face of preconceptions that widebanders are fussy; that they only carry an 'approved' rating by old fogies and for small-scale fare, not a 'thumbs up' from young turks for brash rock.

Does your musical diet focus on large-scale classical, with a preference for maximally lit-up sound separated out into individual performers? Now Aarka won't apply sufficient resolution. That type of hi-rez sound finely julienned like a TV chef's fancy knife work isn't what this is about. It's inherently softer and more generous. Even close-mic'd string quartets exhibit less on-string sheen and overtone air. The obvious benefit is being less critical of hot recordings. That segues right back to being far more fun than diva speakers which can't order one meal off your regular music menu without asking for things to be different than they are. Stepping back, Jacob and crew really challenged themselves by miniaturizing their signature Rethm recipe whilst removing—from a bookshelf speaker even when not used in a wall rack but on a stand in free space—the stigma of sounding small and insufficiently weighty. The obvious consequence is being more of a really maxi than mini monitor. 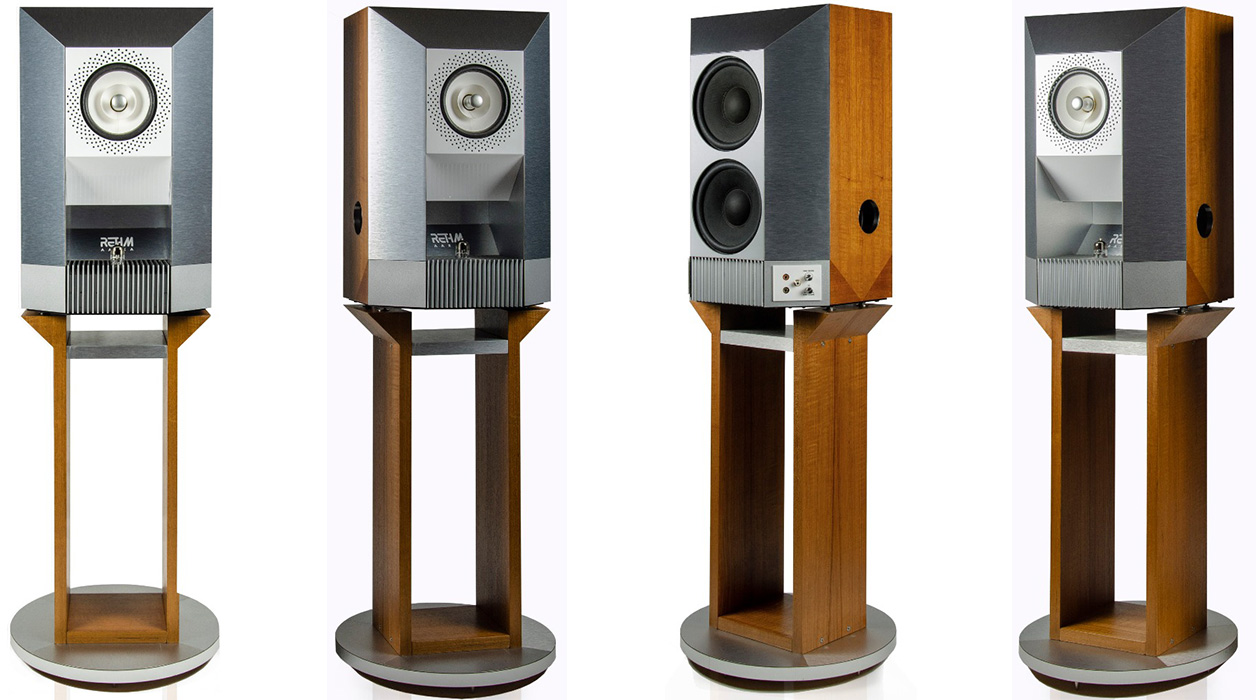 As a hand-built product of looser tolerances, it'll take some fiddling with the top and bottom spikes to eliminate all micro wobble. Turning off Aarka's mains rocker with its belly switch set to 'external amp' still causes a fart. Turning it off with 'internal amp' selected already happens in total silence. On my loaners, the separate 'on' pusher for the internal amp was obscured by the stand. Future production will relocate it a bit so it's more easy to get to. To revisit the Sanskrit meaning of the name, Aarka is "one who praises", "a singer" but also "a flash of lightning".

Missing from that list is "one who loves to party and really gets down".

And Aarka can play the real barker if fed accordingly. That makes it a widebander which has been perfectly re-tuned for 21st-century music. Who woulda thunk it?

Jacob George responds: "Exactly as you said, for Aarka we wanted something that didn't have ultra-high resolution which would limit its universality of musical choices; and which didn't sound 'monitor sized'. We wanted something most music lovers as opposed to audiophiles could enjoy, albeit at a reasonably elevated level. Incidentally, I already spoke to my electronics guys. We feel that we can rework the preamplifier stage of the class A amplifier to bring in greater resolution and dynamics in fully active mode. That upgrade is already in the works."