Gone fishing. Angling actually. I thought a ~30° turn-out of the wings ideal for both tonal balance and soundstage width. I heard nary a sacrifice in bass output which bigger angles do eat into. This arrives us at observation #4: out-of-head sonic panorama. Not having heard MySphere's successor to the AKG K-1000, I can't in good conscience call the SR1a the widest-staging headphone to market; only the widest I've heard. That aspect alone justifies an earfield monitor tag. Specific construction obviously eliminates the horizontal. If you love to listen in bed, with these you'll have to do it sitting up. 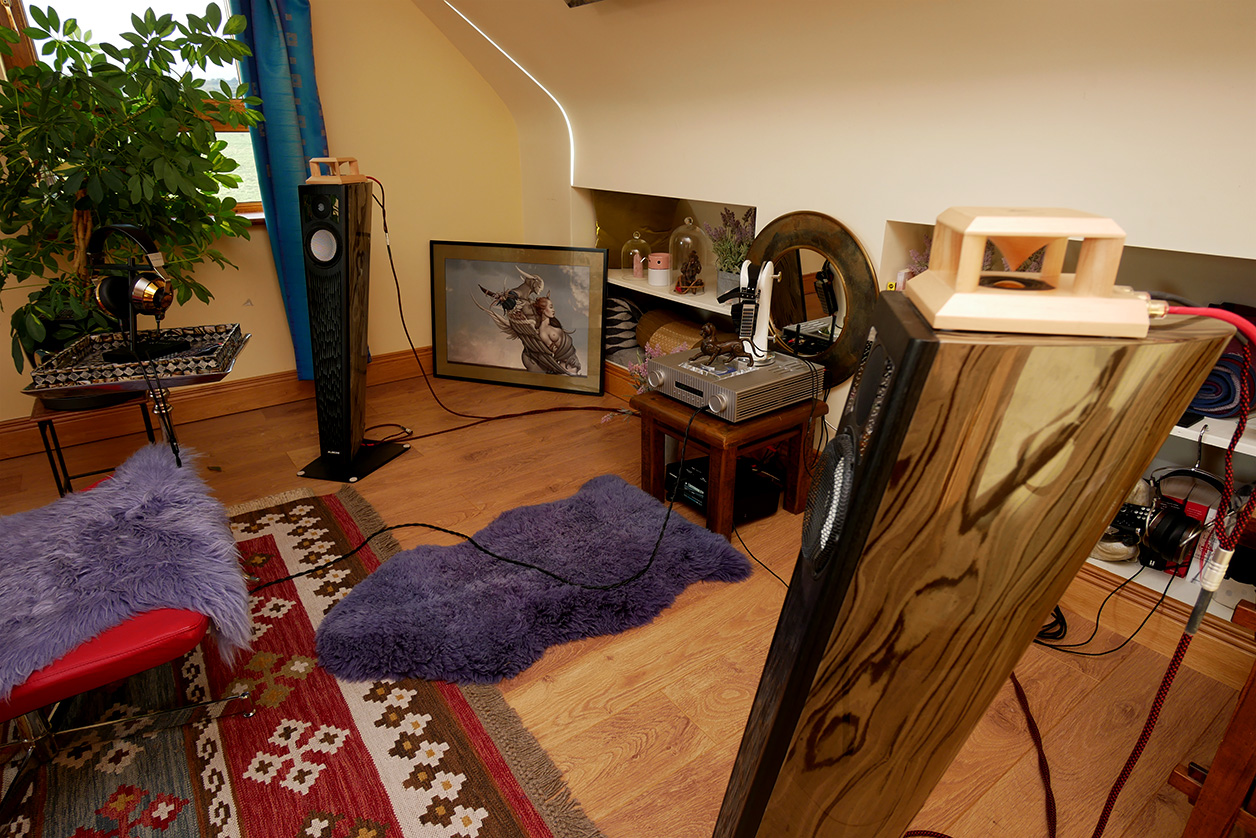 Final's Sonorous X are our top dynamic circumaurals. Massive metal construction makes them very heavy if not as extreme as the big Abyss. On wear comfort, the SR1a completely dominated. On bass density and weight, the dynamic driver compresses air against its gilded aluminium shell. That had it over the ribbon which only sees the acoustic impedance of the air behind it. On follow-through bass punch then—shoulder and hip connection, not just fist—the Final exercised more raw power and crunch (what Zu Audio call shove). On general tone mass and colour pop, it too went farther. On the flip side, its reading was more ponderous, thick, 'packed' and slightly gelatinous by contrast. Its soundstaging compacted, separation and speed diminished and the ribbon's extreme clarity clouded over. On micro detail and top-end dynamics without metallic treble undertones, the Raal was king. 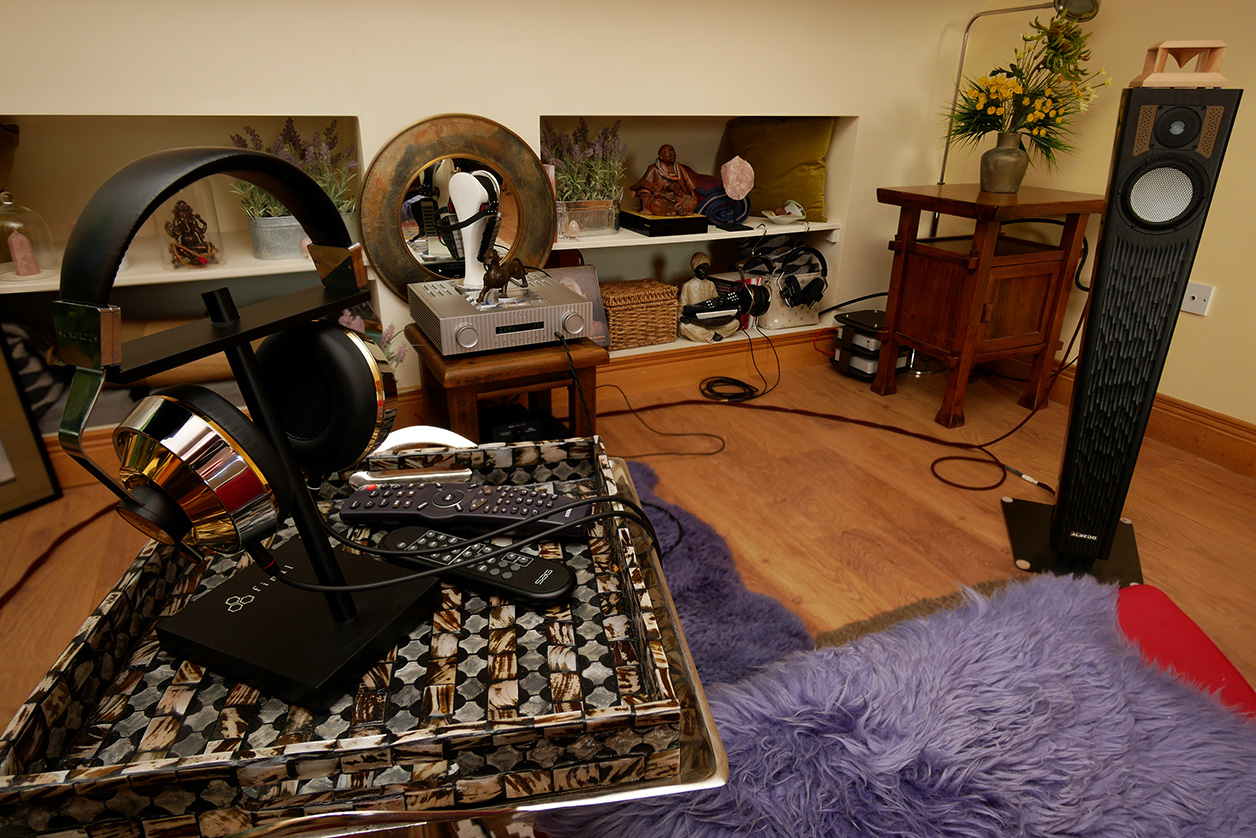 On tonal perspective, the Sonorous was bottom up, the SR1a top down. On exposure, the Final had more black in its colour palette, the Raal Requisite more white. On resolution and timing exactitude, the ribbon was patently superior. In terms of density and fleshiness, the dynamic driver had it. Some of this clearly came about from resonance overlay of bass on vocal range. I also wondered whether the ribbon's contributions of total harmonic and intermodulation distortion weren't rather lower than those of Final's Titanium dome. In any case, it's quite easy to predict that listeners idealizing a Sonorous X presentation who also appreciate where the SR1a is superior could feel inclined to apply digital EQ and bend the Raal closer to their (p)reference. To my mind, that'd only take away from the ribbons. Those really do present as very finely tuned well-balanced instruments with a particular personality profile and skill set. I'd not manipulate any of it by DSP like an arm-chair reverse engineer. I'd stick to my preceding ancillaries to inject whatever harmonic profile I was after – a subject still to come. 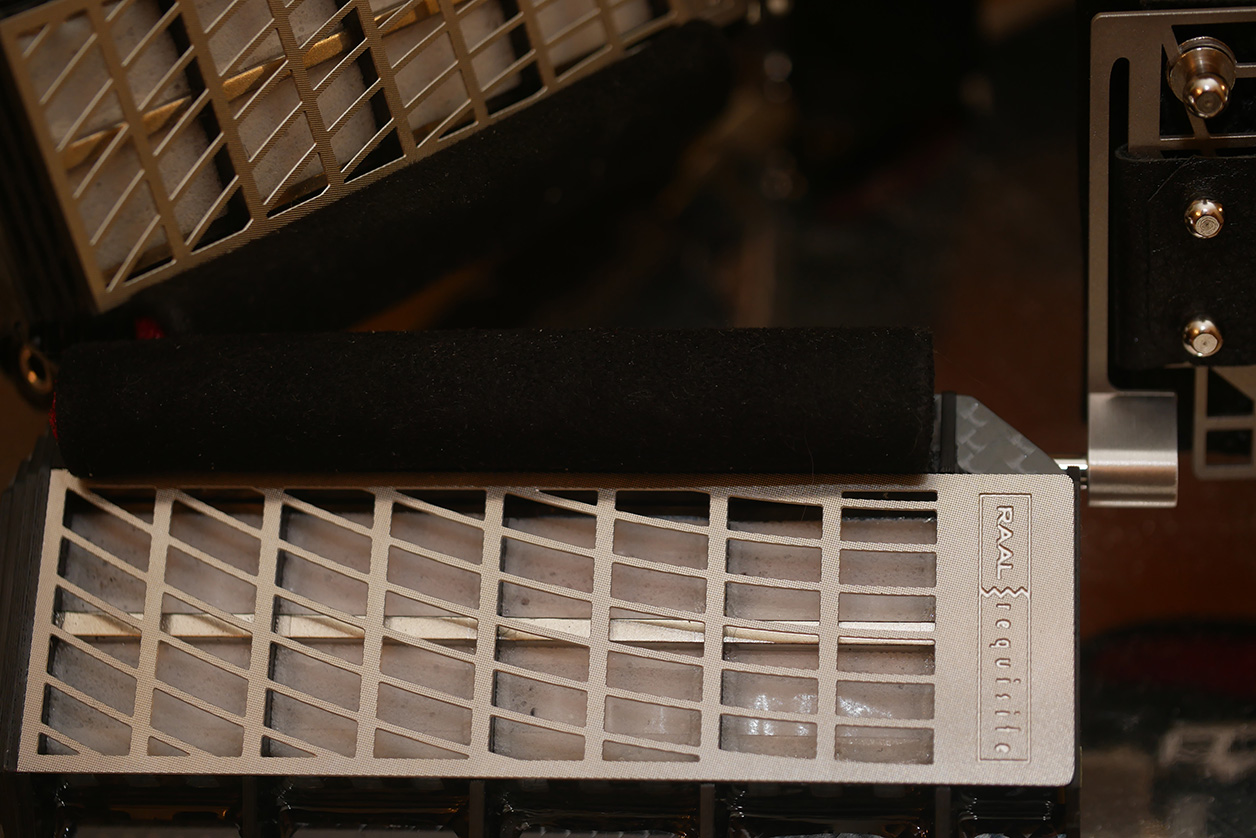 There's soft laser-cut polyurethane foam on one side, hard polyethylene foam on the other to remove a 10dB peak at the ribbon's resonant frequency via acoustical resistance.

The story about the foams: "The white foam is quite stiff and very thin so has very low absorption of the highs to be meaningful only above 20kHz. It also has certain very favorable properties if you want acoustical resistance with the least amount of absorption. Best in that ratio are woven metal meshes but they may show resonance so stiff foam is best overall. We use melaminet inside and out plus a layer of polyurethane foam on the outside. We can't get by without any foam on the inside because then the modal resonances on the ribbon wouldn't be controlled very well. Due to the low resonant frequency of the ribbon and some other tricks, we only need a very low amount of acoustical resistance which is why the SR1a excel at dynamics.

"The greatest enemy of polyurethane is UV radiation so to prolong the life of ours, we chemically dyed it black. The dye bonds itself to the polyurethane in a very thin layer and the reaction stops when the whole surface of the foam is covered as the dye doesn't bond to itself, just to exposed foam. This happens throughout the foam volume so when you cut it, it's colored in the middle as well. We use this method to get that rich Requisite-red color for the cushions as you can't buy memory foam in any colors and we really wanted that Requisite red. Actually, you can't buy even regular polyurethane foam this dark black. It's always dark gray rather than truly black so that was another problem to solve." 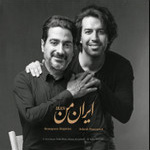 With SR1a versus Susvara as now our best resident planar, I had two peas in a bullet pod which was faster and leaner than the dynamics. But differences remained. First were microdynamics. The Raal Requisite accelerated stronger. This made for the bigger more explosive voltage swings as though, within the same time frame, a bigger engine in a lighter chassis pulled harder to travel the greater distance. This constant game of rapid crescendo and decrescendo or attack and retreat factored on a brilliant Persian recording with tar ensemble, oud, clarinet, big complex drums and high female and male solo vocals [Homayoun Shajarian & Sohrab Pournazeri, Iran, "Pulled Along"]. With the Serbians, the sensation of unleashed elemental forces like rain and wind represented by the instruments as a tone poem was rather more violent. In our loudspeaker repertoire, only the Cube Audio Nenuphar 10" widebanders with 87-slug neodymium motor and no electrical filter network approach but still don't equal this degree of move-like-butterfly sting-like-bee dynamic mobility. And yes, one needs proper production values of high recorded dynamic range to exploit this. Compressed wall-of-sound stuff just has everything—yawn!—sound equally loud. But spin up something with 50dB of recorded dynamic range like the Tonian Lab efforts and you'll feel the exhilaration which the ribbon's virtual turbo boost delivers from such liberated fare. 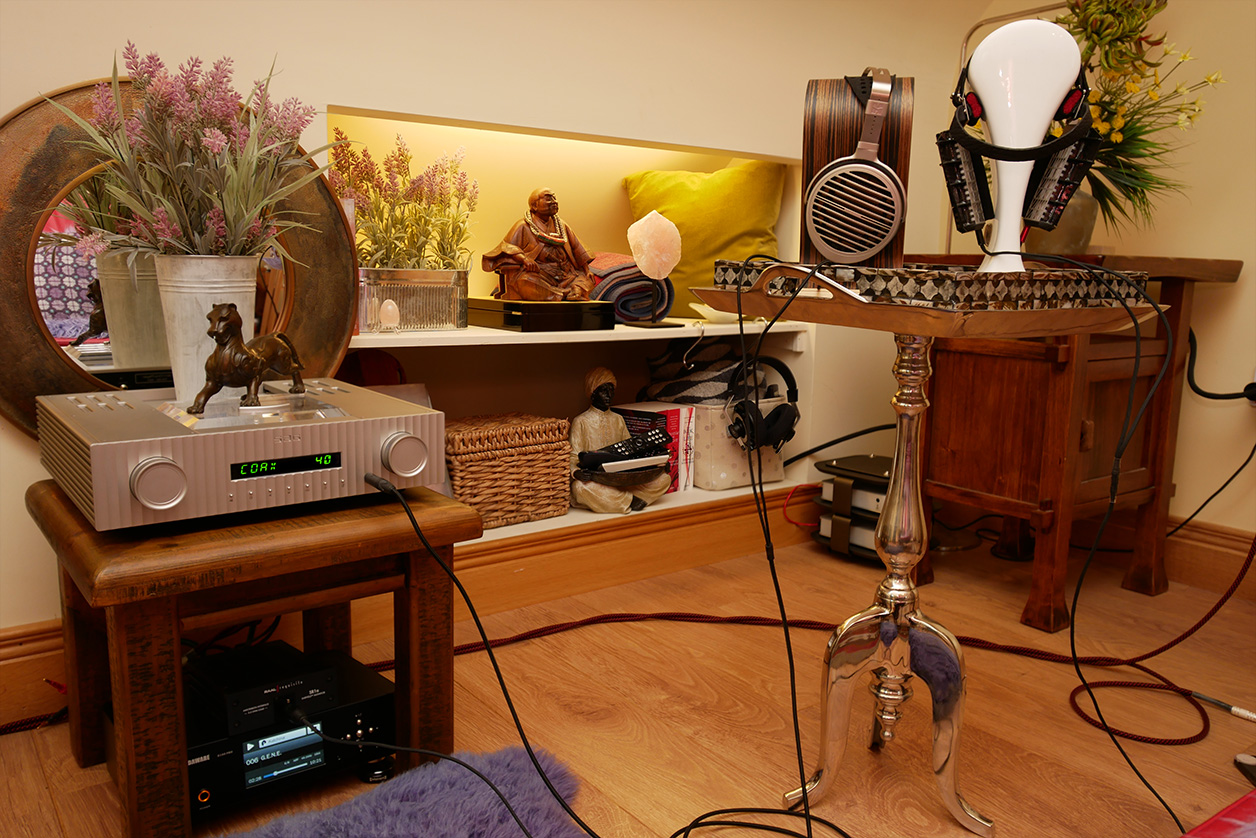 Next came textural diversity. With even more resolved high frequencies for the deeper retrieval of ultra-faint upper harmonics, the SR1a teased out very momentary small tone modulations which the Sino planarmagnetic overlooked. To see this meant looking, i.e. paying close attention to the timbres of individual performers and the sudden flickering shifts they embed during the delivery of a melodic arc or as a small emphasis in a quick run. Finally and without trying, I noticed heavily interlocking percussion details underneath/behind the massed dueling lutes which didn't separate out this clearly with the Susvara. This assigned a 3rd clear advantage to the ribbon: superior separation powers. 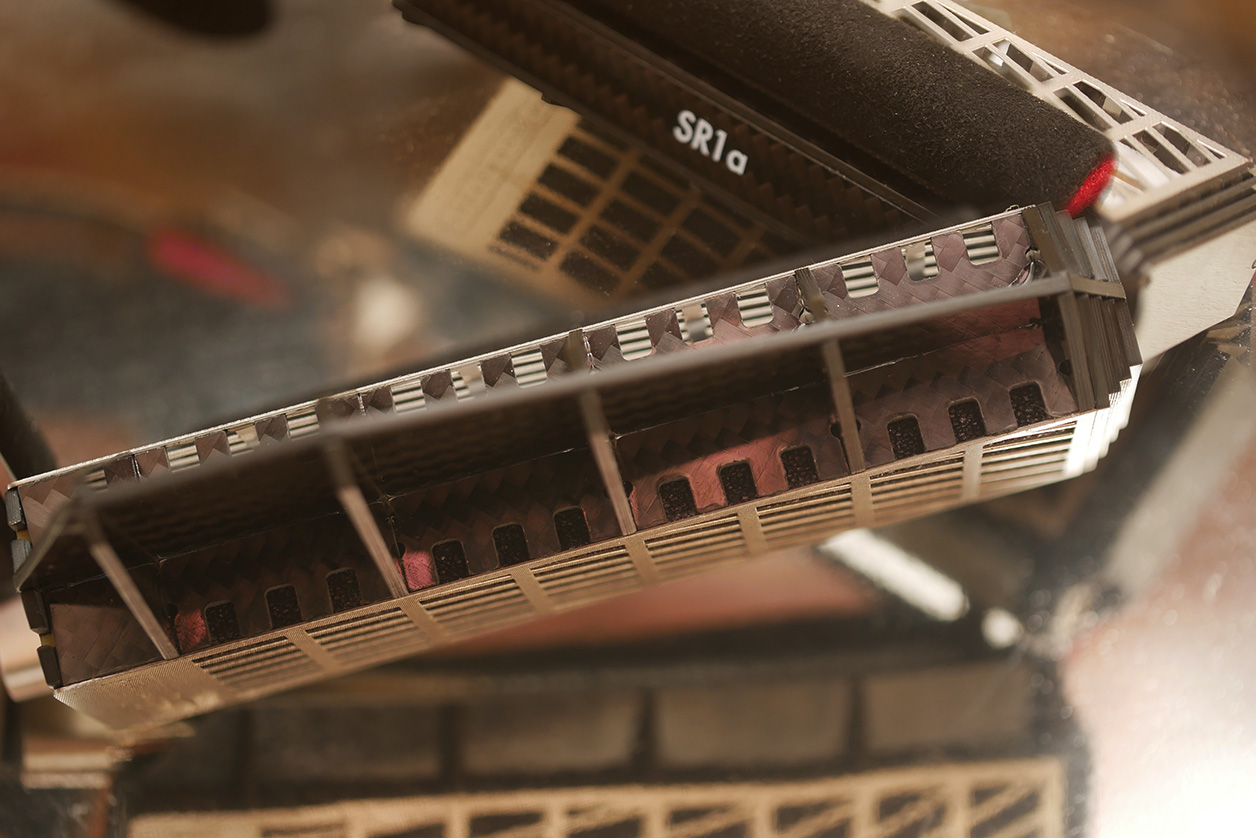 The final difference fell into a more sideways category which I find difficult to articulate. My best effort is to say that the planarmagnetics felt slightly more viscous or oily versus the ribbons' pure water. Negligé versus full frontal nudity perhaps? To wrap up my triangulations, Final's D8000 was simply outclassed. It didn't warrant inclusion. My personal takeaway was that if I could keep just two flagship headphones which were in-house just then, it'd be the Final Sonorous X for sophisticated comfort sound; and the SR1a for ultimate let's-hear-everything-that's-there transparency. If I could keep only one? Before I'll answer that, I had more hardware shuffling ahead to decide on my favourite SR1a chain. That meant more amps, more preamps, more sources.