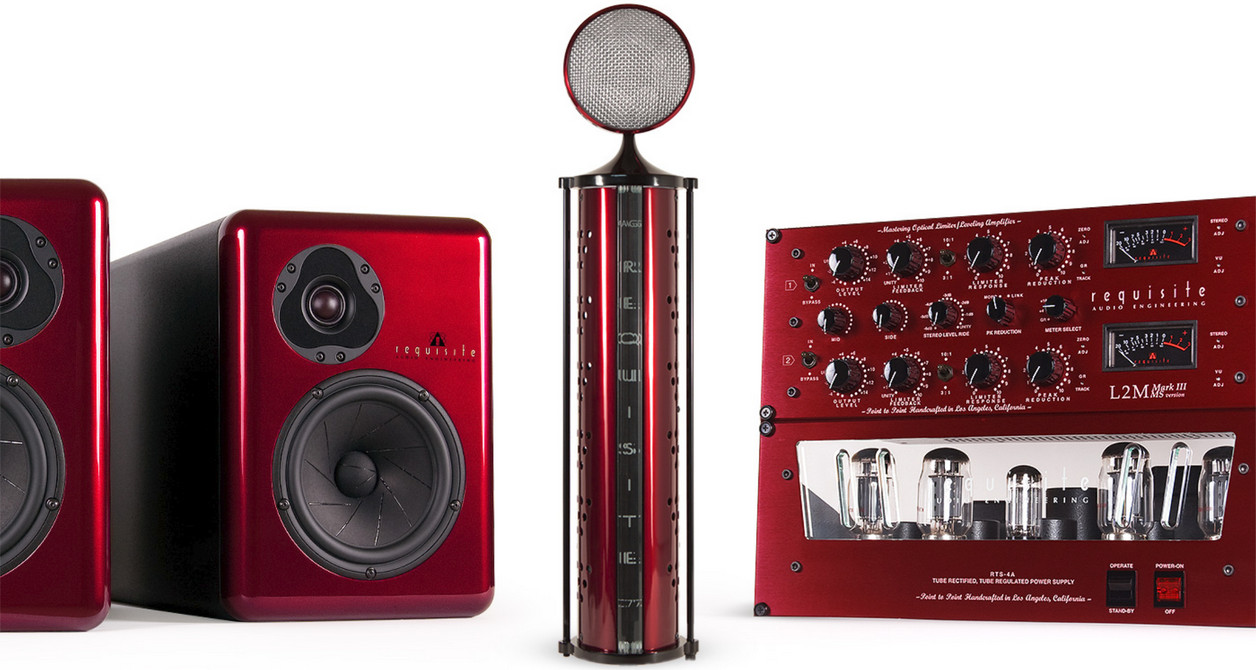 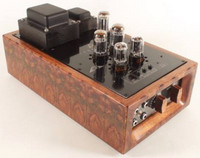 Confession time. Going in, these were my assumptions: very fast ultra-explicit sound due to its complete avoidance of typical enclosure issues. Those are headfi's speaker/room interactions created by ear pads and partially or fully sealed ear cups. They create miniature rooms around our ears. Floating ribbon bass in particular would have to sound leaner/cleaner and less weighty because it would lack any of the warmth from conventional reflection and resonance issues. A similar absence of typical enclosure effects might dominate in the midband per se or due to bass resonances no longer interfering. Treble would be the quickest most refined. In short, I expected the SR1a to reveal what a near-field microphone captures: raw studio sound uncut by any room ambiance; electrostatic down-to-the-bone clarity but with real bass. Whatever harmonic spectrum one favoured would have to come from the preceding amplifier.

That would track that this branding's other half is Danny 'Sage' McKinney who since 1995 has built microphones, monitors, compressors, limiters, preamps and cables for studio work under the Requisite Audio Engineering banner. He also presides over the Standel company of guitar amplifiers. Looking at his sealed monitor with top-shelf Danish drivers designed by Alex or his own pure silver cables shows that Danny's mastering sensibilities align with audiophiles. He faces familiar ire in pro-audio chat rooms. Anonymous posters claim that different power cords or microphone cables couldn't possibly make significant differences to pronounce dissenting opinions as snake oil. Clearly Danny knows better. Having decided to include Alex's ribbon headphones in his catalogue is then suggestive. The pro connection also explains why open-baffle sound leakage wouldn't be an issue; or the decidedly Steam Punk looks and membrane length. Recording and mastering engineers relate to their equipment as tools of the trade. That's not about glamor styling à la Meze Empyrean. It's about maximally informative, linear ultra-low distortion lab kit. Precision and sheer honesty save time and money to do that perfect job for the recording artists or label. That's a prorequisite. [Their HPA-1 headphone amp in dovetailed solid wood with 6SN7 and tube rectifier above right.]

This photo credit from Requisite's FaceBook pages reads, "Danny McKinney and the legendary singer, composer and recording artist Stevie Wonder! This was the 3rd time Stevie visited our Naam booth, what a delight. We're delivering Stevie's SR1a this week!" When a legendary blind singer samples the pro-audio show in the US to come back three times then decides on your headphones, you can be sure that you've got things dialed in!

For those new to Raal Ribbon the well-established tweeter company, I asked for a client list to show at a glance where their custom ribbon tweeters show up in production loudspeakers. It includes some pretty pedigreed audio royalty.

Or as the boss dryly put it when attaching this photo, "Raal have grown a bit since we met." Eleven head strong was indeed quite the crowd for a boutique Serbian transducer specialist especially when they all wore exotic SR1a.

Next I asked Alex about his ongoing collaboration with Danny which started an Eternity ago. Their US/Serbian connection didn't seem easy in practice. How did they first meet? What made them decide to work together at a time when Alex was known for just ribbon tweeters? Today, did Danny have input on any aspects of R&D and specifying certain target specs? Or was he focused purely on sales & marketing for this product? [In photo, front row left to right, Mladen Stavric, Dragan Pesic, Aleksandar Radisavljevic, Predrag Mitrovic, Bratislav Marinkovic; back row left to right, Miroslav Bogdanovic, Igor Jovanovic, Miljan Bozilovic, Miroslav Marinkovic, Sasa Arandjelovic, Milan Milijev.]

For a historical reference on a floating headphone without enclosure barring the Jecklin Float, the most relevant precursor for the SR1a's winged structure is AKG's legendary K-1000. Its direct descendant designed and manufactured by the original two engineers Ryback and Renner is todays MySphere from Austria. Its 40mm² dynamic not planar driver licks the cosmetic challenge far better than the far longer Raal Requisite cartridge does. As to actual ribbon headfi precursors, I'm not aware of one. If memory serves, Sweden's Transmission Audio had at one time announced working on it. If so, it never materialized. Alex's explanation on the inherent impedance hurdle might explain why nobody has tried since. 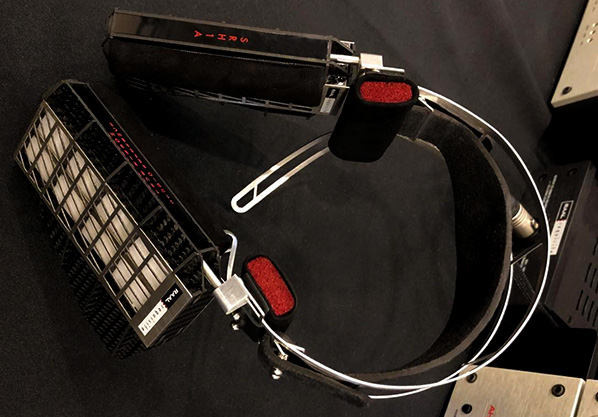 The first commercial all-ribbon loudspeaker was 1981's Apogee Full Range. Its impedance with transformer spanned 1-4Ω whilst midrange direct drive dropped to 0.14Ω. Apogee's Scintilla following next was a mostly 1Ω speaker notorious for eating amps. Only the biggest Krells of the day proved up to the task. Today's pure ribbon speaker brands include Greece's Analysis Audio, Spain's AlsyVox  and Transmission Audio. From the Swedish website, we refresh our memory about what a true ribbon is:

"... a membrane of very thin corrugated aluminium suspended between continuous rows of magnets at its narrow ends only. It boasts extended performance in the treble unlike planar-magnetics which exhibit HF roll-off caused by their film's mechanical properties and horizontal tensioning forces. The impedance of a ribbon is mainly resistive. The true ribbon's biggest advantage is the absence of an extra membrane or film to which it is attached; and being a singular strip through which the current flows. This makes the ribbon both diaphragm and voice coil. [A bit like a direct-heated triode – Ed.]

"Each part of it is driven directly and simultaneously without any energy storage, giving fast stop and go potential to maintain the leading edge and harmonics of musical sounds. Low inter-modulation and FM distortion don't corrupt the harmonic structure. Being non-dispersive in the time domain, a true ribbon produces close to zero harmonic addition or subtraction. At 90dB and as a line source, it is capable of THD below 0.03%."

About potential cons: "The ribbon is acoustically transparent hence prone to let sound pressures from behind pass through it. Open dipole use avoids that. The transformer can be problematic with distortion in the frequency extremes from leak inductance and stray capacitance. The best ribbon thus would be a transformer-less, purely resistive, coil-less and carrier-less pure metal film ribbon of open dipole type, suspended at its ends only and wide enough to give good coupling into the lower frequencies." Which rather perfectly describes the SR1a. Or as Brent Butterworth put it for his Denver show report 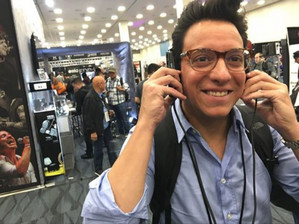 on SoundStage, these "might be the gutsiest creation of any headphone company in history". Except that Raal aren't one. Or weren't. Until now.

The SR1a is the antithesis of the easy hifi sell. Aiming it at pro audio is inspired. Now only performance and reliability matter. Slick looks don't. The need for a powerful dedicated amplifier like Alex's studio-ready Benchmark Media won't be a hurdle. Only price might be where studio personnel isn't used to high-end standards. But if Raal Requisite compete sonically against a HifiMan HE-1000/Susvara, Audeze LCD-4, Meze Empyrean, Final Sonorous X, Mysphere 3.1, Abyss AB-1266 Phi et al, the price is where everyone else sells their flagships.

Upon hearing the SR1a at the 2019 Namm show, Latin Grammy award winner and mastering engineer Erick Urbino said, "I've never heard any headphones that I can really trust about what's going on in the low end – until these crazy headphones!" That from someone with his very own awarded recordings as reference; about the bass in particular; from a ribbon which most of us only know as a speaker tweeter where it works upward of 2-3kHz. His statement was pretty mind-blowing then and 180° out of phase with popular beliefs that ribbons can't do bass. From that alone, it seemed that the SR1a would force us all to rethink a few things we thought we knew.