In your secure case, you'll have an SR1a, a 225cm tip-to-tip headphone cable with female 4-pin XLR so you can't insert it into a standard headfi amp's balanced input—presenting that with a virtual short wouldn't be good—the impedance-matching box and four 69cm banana-terminated leads to connect that box to your amplifier's speaker terminals. My delivery also contained two replacement ribbon cartridges in a special cutout of the Pelican case's top foam liner. To remove/insert a cartridge just means opening a wing fully to get the cartridge top out of the shadow of the hinge. Then it's pull, then plug; easier than light bulbs.

With the adjustable leather headband going across your head's north pole, the thin adjustable leather strap wraps around its equator in the back. Should you tilt your head forward, nothing slips right off. The long vertical front-of-ear pads prevent the same in the other direction. Should small head motions elicit minor 'clinks', it'll be your ear rings. Rotate the wings out just enough to clear them; or take them off. Build quality is tidy, work-horse solid and perfectly fit for purpose. Luxury wearable art is for Final's and Meze's top models and the Abyss Diana. 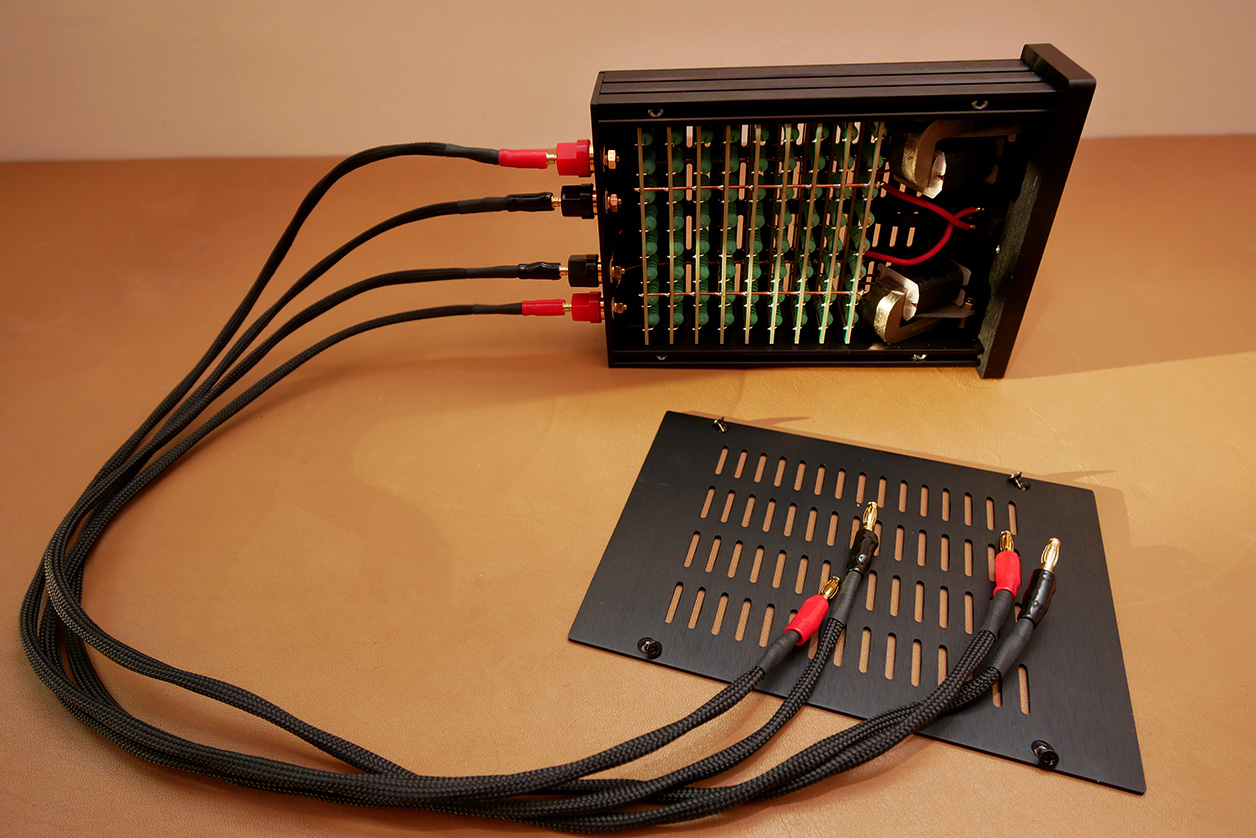 Time to snap the case shut and get on with my auditions.

For those I had just the perfect amp beause with it, I could compare HifiMan's Susvara, Final's Sonorous X and their stable-mate D8000 planars plus the SR1a all off the same deck. As a 100wpc all-in-one DAC, network/USB media/CD player, old-fashioned tuner and powerful integrated class A/B amp, Simon Lee's $4'500 SAG AIO uses two complimentary pairs of premium lateral Hitachi Mosfets. Those couple to a ¼" headphone output through a simple voltage divider. This drives the inefficient Susvara at full clip with the attenuator at just half mast, so headroom galore. Yet it remains dead quiet on Final's ultra-efficient Sonorous X. Plugging a headphone in auto-mutes the speaker outputs. That made comparisons super easy without cable disconnects to the impedance box. At 35 out of 99 on the dial, the SR1a hit the sweat spot of my SPL needs. That equated to 6.75 volts, 0.78A current and 5.26 watts. Beyond 50 lay the land of quick fatigue. Which leads us to… 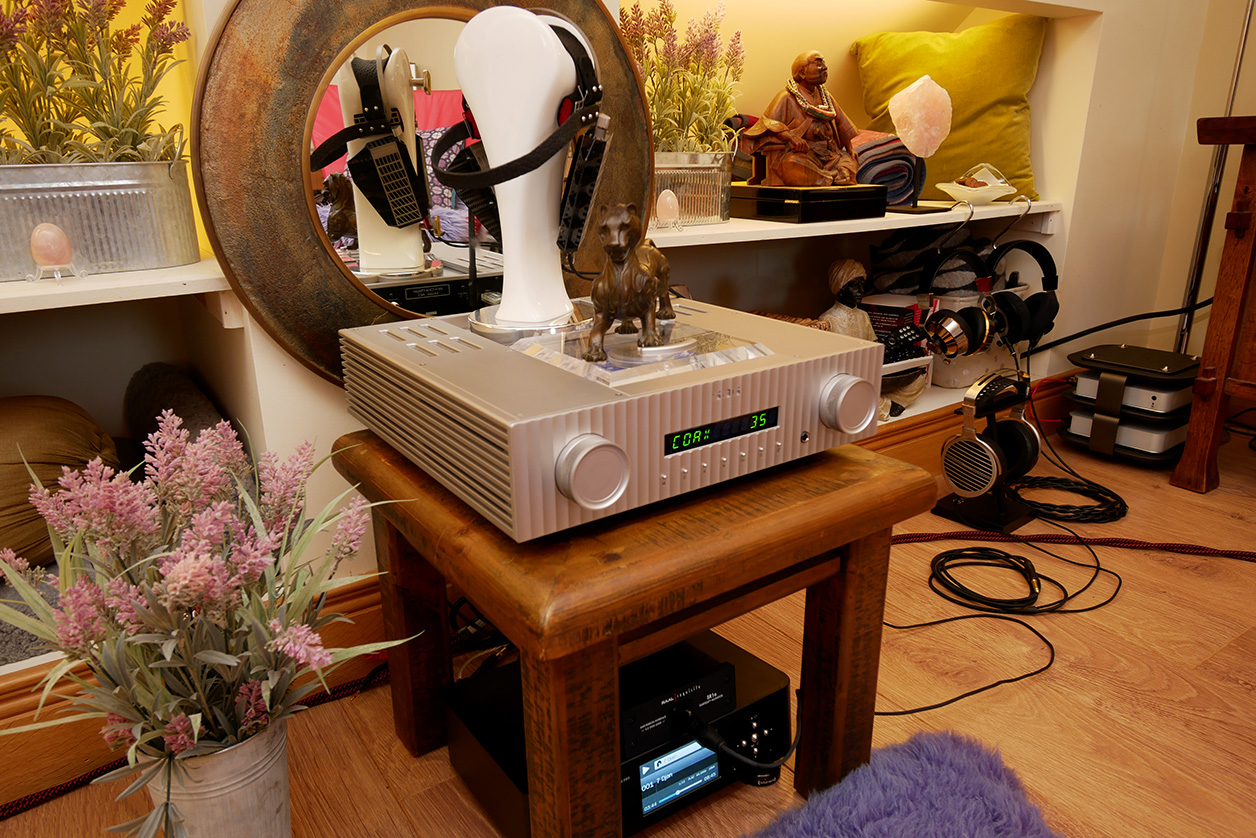 … observation #1. The SR1a suffer none of the usual compression or turbulence 'room-lock' issues that to varying degrees all circumaural ears cups cause which trap pockets of air on our ears. Removing those reverberant reflective virtual rooms from our pink bits eliminates not just (yes!) sweaty ears. It also removes those typical distress signals as you turn up the volume. That means you're most likely to kick off SR1a sessions wildly louder than normal. I did. There's no reminder of distortion, resonance or mud to hold you back. Sooner than later you'll encounter fatigue. If that has you conclude that the SR1a are fatiguing, you'd be a feckin eejit as they say in Eire. Listening too bleeding loud is fatiguing no matter what you do it with. After first excesses, you should sober up and realize that the SR1a actually invite listening at lower than customary levels because of their crystalline top-to-bottom clarity. In that mode, they're the physically and aurally least fatiguing ear speakers I've ever heard, exclamation mark. No clamping pressure, no build-up of warmth or air compression on the ears, no irritation on top of the skull, no ear-muff syndrome. The sensation was in fact very similar to the Albedo Audio Aptica transmission line Accuton speakers with Franck Tchang super tweeters on the same amp, set up in the extreme nearfield toed-in face on. It was just miniaturized and without the physical impact of bass being felt on the skin not just ears.

Mirror shows one channel's speaker terminals with the connection to the impedance adapter box below the component.

Observation #2. With no resonant/reflective bass mud intruding on the midband; with the fastest most immediate endlessly extended treble illuminating it from on high – you'll hear individualities with four unison and octave-doubled voices you've never made out before. It also means that the weasel word 'musicality' by which many people mean a kind of padded comfort sound with plenty of gravy is gone. That bathtub-on-wheels suspension whereby family sedans disconnect their occupants from any real road feel has become a taut Corvette. Now each asphalt ripple, pebble and rain groove registers. If you view a car's read of the blacktop conditions as vinyl or CD grooves, suspension equals hifi tuning. A very plush 'musicality' suspension equalizes irregularities in the name of smoothness. It throws away information. It rounds over edges. With the SR1a, what sounds like a squeaky-clean impulse response across the audible bandwidth does not. It fully exposes/unpacks percussive transients as each tone's steep crisp rise from nothing. Absence of overhang and energy storage—indecisive stop'n'go—strips out familiar connective tissue between sounds. Such a reveal may at least initially register as a particular brightness of detail intensity or hyper clarity. It's a form of information overload. Everything is out in the clear, distinct, discrete and unclothed if you will. It's no longer politely hinted at, faintly suggested or partially hidden behind something else. The more complex the mix, the more intense that perception. If you're not used to hearing and paying attention to this much, there'll be a period of acclimation; or mixing things up with simpler tracks for some time-out from a big data assault. If you came from an old 4×4 Jeep and started driving a very responsive BMW turbo, you'd expect to make some adjustments as well. 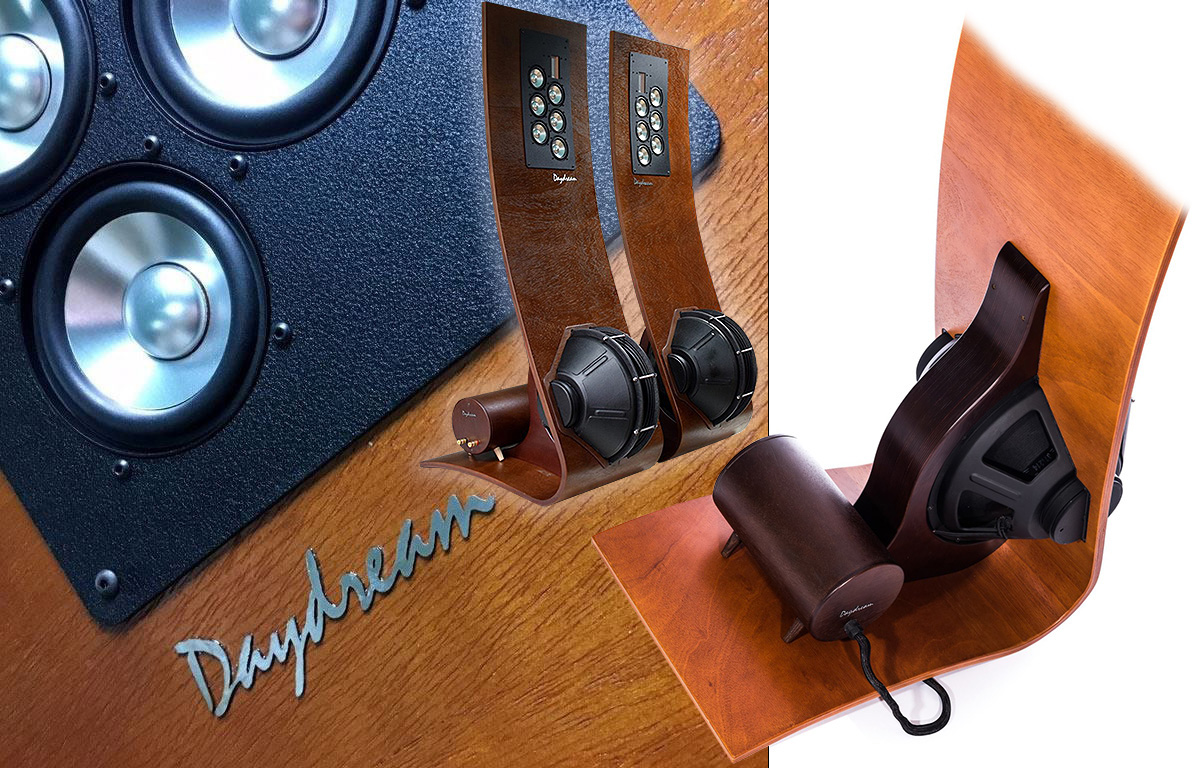 Observation #3. As predicted by the concept of a free-floating ribbon, the SR1a's open-baffle bass does not play the games of back loading, air trapping or resonant reflections with their telltale bloat, minor woolliness and warmth. The same greased speed of the midband and treble operates in the 30Hz+ low bands which are perfectly real and not imaginary. That means spectacular pitch definition and clarity without the impact halo whereby drivers in enclosures add to bass beats a sort of cloud which movies visualize as a slow-motion bomb blast with its rain of falling debris. SR1a bass works without those miniature flares. Its bass is like rain on a tin roof; articulate, well damped and precise. Thus the quality of ribbon treble which many of us are familiar with from loudspeaker tweeters informs the entire bandwidth. That's most unusual unless you've heard a well-implemented open baffle like that Ecobox Daydream. Compared to the norm, it's quicker, dynamically more alive and cleaner yet also leaner and brighter all over. If the SR1a were the new norm, everything else, to sundry degrees, would be slower, fuzzier, darker, warmer, less decisive and distinct. This really was something new and different in flagship headfi.