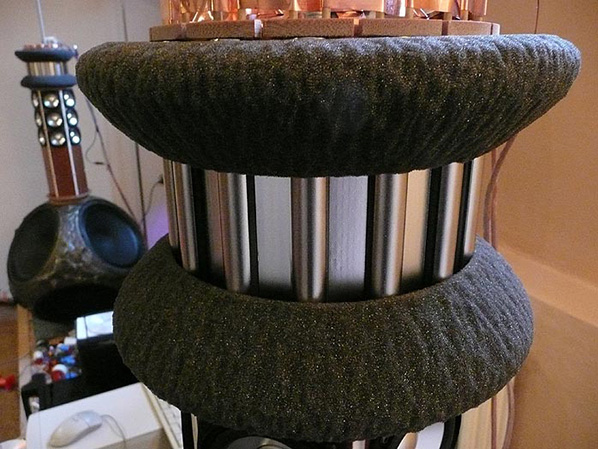 Finally a closer look at that segmented ribbon crown with top-and-bottom foam absorbers. As to Eternity's fate, "it didn't live long. Too much time to make. Too heavy to ship. Too high a price after typical dealer margins. So it's just the headphones now."

But as I learned in a subsequent email on the viability of a Raal omnipolar ribbon tweeter like the Elac, "after I worked on omni loudspeakers, I moved on to dipoles. You in fact have already heard and even reviewed my design for Ecobox; except that I use 'wings' to lower the bass and they decided against it. I supply them with the mid-high modules and all the crossover parts. My own baffle at home is completely flat. Svetoslav decided to go with a curved baffle for better cosmetics. Too bad you haven't heard it with the bass I have here. The woofers must sit lower thus closer to the floor than how they mount theirs and the wings help significantly." In short, the columnar Eternity continues commercial life as a rolled-out-flat open baffle in the Ecobox Daydream.

With Raal's core business being custom ribbon tweeters, they're uniquely positioned to apply them to headfi adventures. Alas, "these ribbons are basically 0.018Ω and need 5A RMS for full swing. Hence we add what amounts to a high-power resistor for about 6Ω with the included cable. That connects in series to a speaker amp of your choice which delivers the required 5 amperes. The actual power which the ribbon sees will be about half a watt. The rest gets burnt up in series resistance.

"Useful amplifier power starts at 50w/8Ω. The amp's sound is very important. These drivers reveal every nuance so the sound really depends on your amplifier. Our interface box has a very benign impedance curve so any amp will work with far less stress than on any speaker it might drive. That will reveal its true nature.

"Obviously bass will fade like it did with AKG's K-1000 as one angles the pads outwards. These are small open baffles with a high cut-off so acoustic cancellation starts at 2kHz. However, proximity makes you hear the front wave as far louder than the back. This counteracts dipole 'figure 8' cancellation in our extreme near-field use. The more the wings angle out, the more the loudness differential equalizes because cancellation grows more effective. In the far-field you'd have a 6dB roll-off below 2kHz. 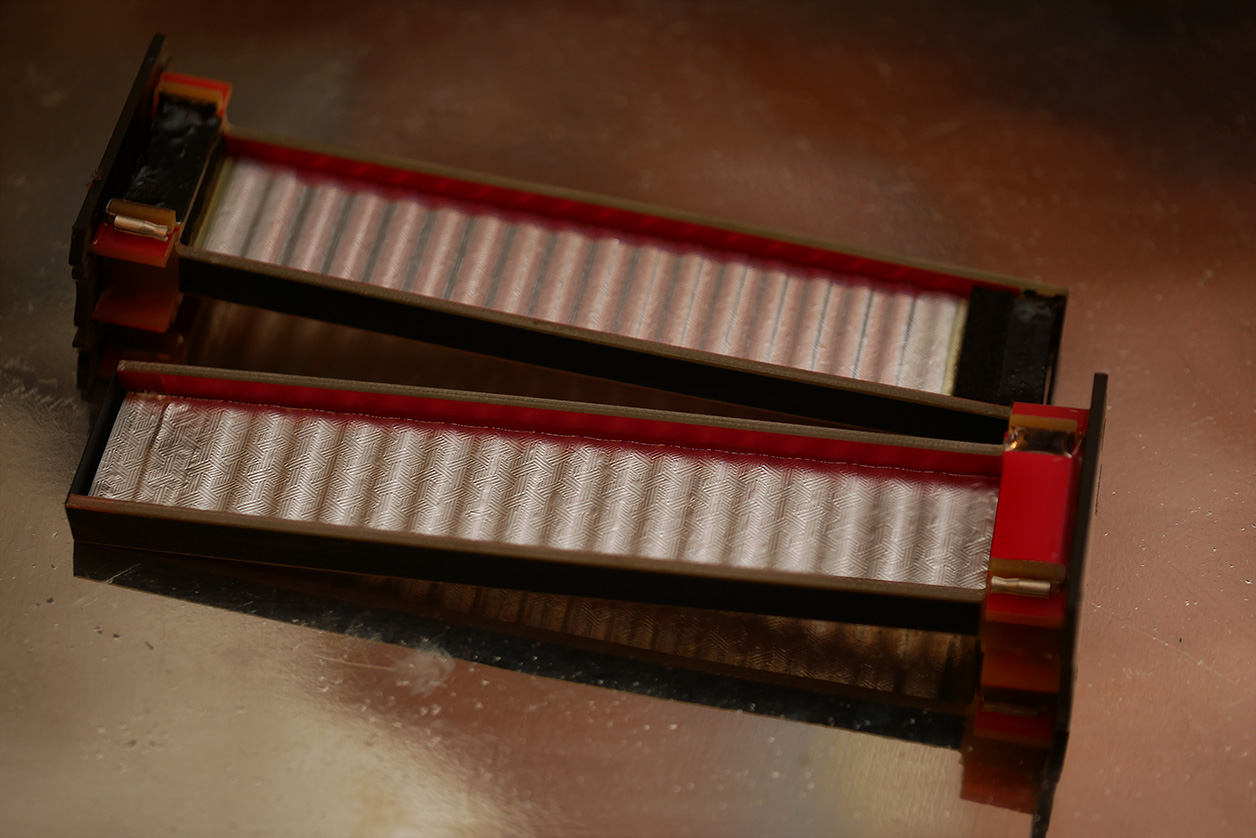 "When positioned close enough so that the panels don't touch your ears, the response is flat down to the driver's Fs. Actually it's a bit lower since radiation resistance increases some toward DC due to the limited space between driver and head. Of all possible headphone transducer technologies, ribbons are the only true bass transducers because we can set a ribbon's Fs anywhere from 10Hz on up. We chose ~36Hz as the best balance between power handling and bass extension. That's why we don't need to seal our ribbons with circumaural ear pads to get true bass. As a 2nd-order system, roll-off below self resonance is 12dB/oct. but due to the proximity effect's EQ it's actually slower than that." 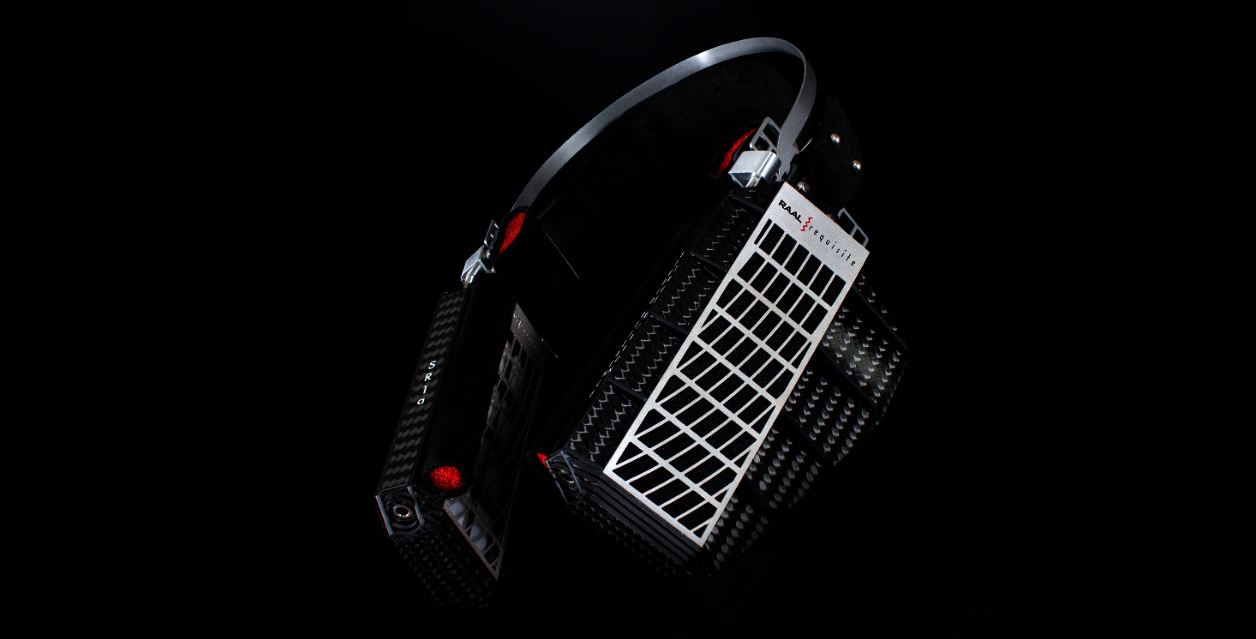 To reiterate, due to punishingly low impedance, the SR1a do not plug into your average or even exceptional ¼" jack. That would expect to see from about 25-600Ω, not a virtual short. Thus these exotic headphones require not only a speaker amplifier of at least 50wpc/8Ω whose sonics you trust but a big load resistor which hides inside the provided interface box to insert between your amp and these drivers. Or as Alex put it, "with a ribbon resistance of 0.018Ω, 85dB/1mW sensitivity and 450mW RMS power handling to generate 111dB on bass-heavy tracks, we need 5 amperes RMS. For that a good example is a 100/200wpc 8/4Ω amp loaded by 5.6Ω which will deliver 140w RMS with 5A of current. Many commercial amplifiers do. Our interface contains an array of small large-value resistors which parallel in sufficient numbers to achieve 5.6Ω of combined resistance with 140W of power at moderate dissipation. It also contains a passive de-emphasis circuit to correct for the rising response of an open-baffle line source. Together with the cable and headphones, the amplifier load will be ~6Ω."

I found myself glancing at our hulking class A Pass Labs XA-30.8 as a potential candidate. Or perhaps our 200-watt class A/B LinnenberG Liszt monos with their DC-coupled ultra bandwidth might be better? This was new terrain. Adapt 'n' improvise. What fun and learning lay ahead. Some say hifi is just endless variations on the same. Not with this assignment! 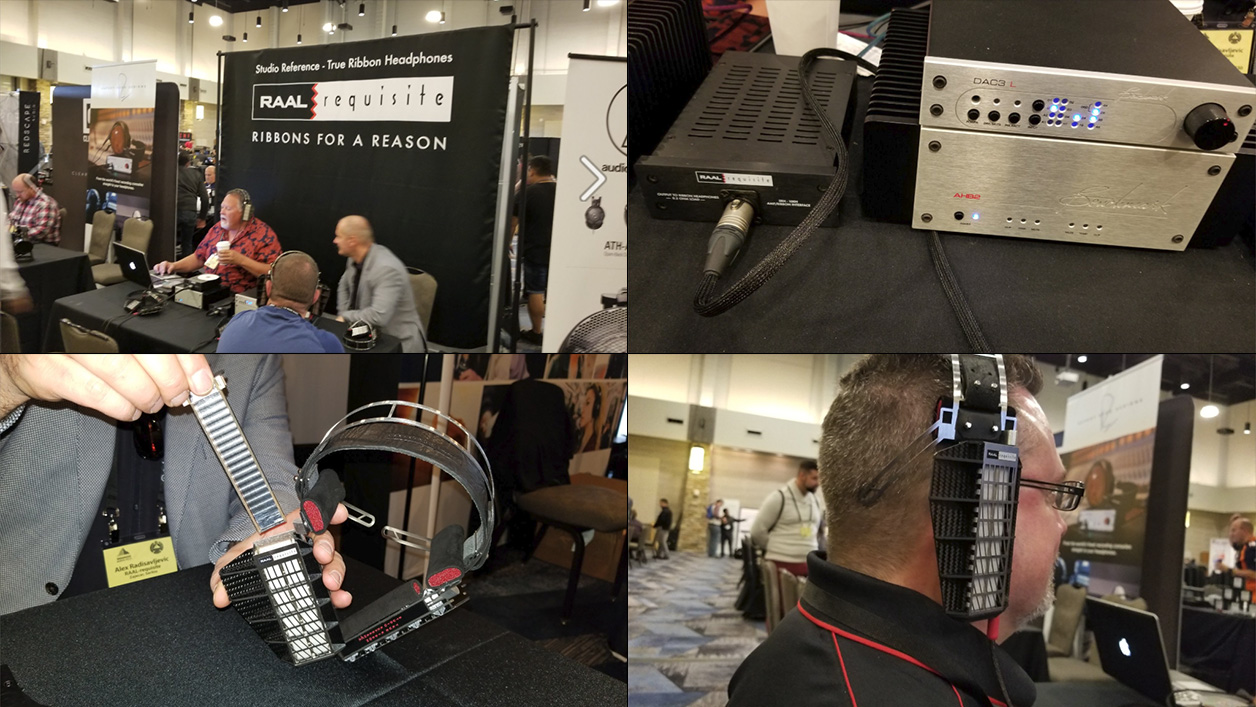 At CanJam with Alex's Benchmark Media DAC/amp which served as development tools during R&D; showing the field-replaceable ribbon insert; and being worn exactly like a floating AKG K-1000. 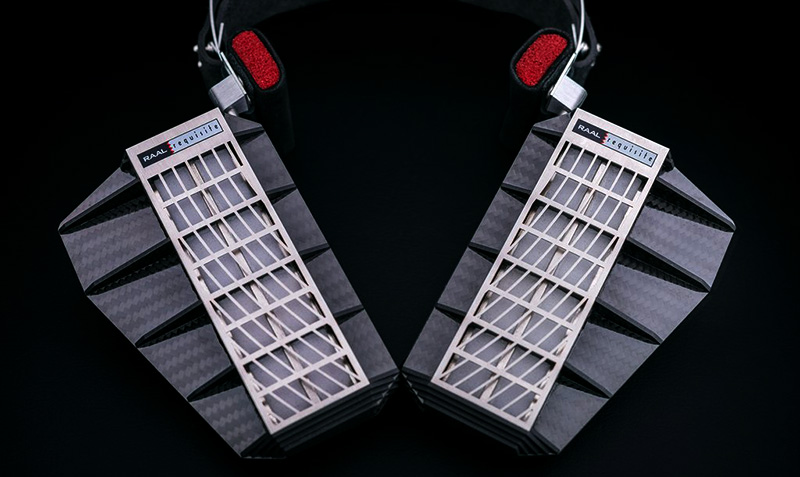 Thinking reader already have a 'but'. Instead of burning off 95% of your amp's power into a big resistor, why not do like tube amps do but in reverse? Their impedance is too high so output magnetics transform it into something much lower. Couldn't transformers raise the ribbon's Ω like they already do when used as tweeters? "Transformers are big and heavy. You couldn't wear them on your head. They would have to be on the table or floor, with a 10' cable to the headphones. At 10', a cable not too heavy but acceptably flexible would present at least 0.15Ω per channel to have more than 10 times the resistance of the ribbon itself. While a transformer could convert 0.15Ω + 0.018Ω into 32Ω, there'd be insufficient power. Only 1/10th of your headphone amp's power would arrive at the ribbon. 9/10th would just heat up the cable. If we compensated by increasing the ribbon's efficiency, we'd need 3 x stronger magnetic induction; about a tenfold weight increase to roughly one pound per ear!"

"The question is, do you really want to wear 2 pounds of magnets or transformers on your head? How about 2 pounds of cabling with no significant resistive loss? Just the 3μH inductance of a normal 10-foot cable utterly destroys treble when terminated by 0.018Ω. Decreasing cable resistance to 0.018Ω would render all cabling useless for HF as the physically possible inductance just isn't low enough.

"In short, for cabling not to become problematic, it must terminate in loads greater than 2-3Ω. Clearly there are no good ways to solve a true ribbon drive problem with existing headphone sockets or even dedicated more powerful headphone amplifiers. The current requirement and low resistance demand a different approach. Sure, we could have introduced our own very specific amplifier similar to how electrostatic headphones need their own dedicated amplifiers. But we wanted a more popular cost-effective solution. Since there's already a 10:1 or greater ratio of cable to ribbon resistance, the ribbon is not controlled by amplifier damping. That was clear from the beginning of designing our SR1a. Ribbon excursion and damping are done passively by using the aforementioned small amounts of radiation resistance. Because now the amplifier's damping factor plays no role at all and cables need to be terminated with more than 2Ω, we can use a resistor of a convenient value in series with the headphones and cable. As far as the ribbon is concerned, this becomes a current-source operation which greatly attenuates the power developed across the ribbon."