Without a high-pass limiting how much bass a small mid/woofer sees, it tries to respond in vain. Its voice coil still heats up despite not producing equivalent output. The louder we play as our music gets bassier, the more impedance rises to restrict the driver's output even far higher up because… in a 2-way, midrange and bass share the same cone. With icOn's high-pass, I'd effectively turned my speakers into a 3-way system. This came not from a lossy passive filter but far superior active ahead of not behind the amplifier. Now my mid/woofers no longer saw real action below 40Hz. This kept their coils cooler to avoid the grosser effects of thermal and dynamic compression. I'd never heard this demonstrated so clearly in our own rig. I was in for a—most appreciative not rude—awakening. Huzzah. Here's a good demonstrator track. It's "Bootarab" from Mahsa Vadhat's Enlighten the Night album, produced expertly by Kari Bremnes' label Kirkelig Kulturverksted.

Even on a compressed YouTube feed you can sense the jagged microdynamics which punctuate the entire number. On Raal's true-ribbon headphones, those are maximally elevated to wiggle like a caught fish. icOn's perfect filter had moved our speaker system closer to that personal reference. The way to know is starting a track at our standard volume only to fight the reach-for-the-remote reflex shortly into it. That's because little melodic peaks or accompanying beat accents suddenly crest higher. More and bigger waves equal higher musical intensity. That's stronger energy transmission. It goes well beyond 'pretty' or 'good' sound. Since we're now in the groove, let's hone our attention with another track from the same album. It seems dynamically more contained but the solo piano at 1:50 does show lively inflections for modulated output. So do Mahsa's subsequent higher notes. If YouTube compression and middling earbuds have you shrug, you're not hearing it. It's there on my 24-bit/96kHz file played back over our now dynamically less limiting hardware. Amplitude distortion gets all the attention because it's so easily illustrated with nonlinear frequency-response graphs. Dynamic compression not on the recording but playback side hardly ever gets the coverage it deserves.

Many people confuse dynamic range with macrodynamics as though the majority of music had the breadth of a Bruckner symphony's delta from barely perceptible tremolos to orgiastic brass fanfares with four trumpets, six French horns, four trombones and one tuba. It doesn't. It's the far narrower window of ~10dB output variations where most well-recorded music lives. These gradations must be maximally differentiated to extract the full musical energy the artists encoded. Apartment dwellers really don't give a toss about 100dB symphonic climaxes. Their neighbors wouldn't tolerate them. They very much do care whether more intimate fare like Mahsa Vahdat's remains emotionally persuasive and lively at medium playback levels; or devolves into something stale, canned and boring. Who would have expected superior dynamic range on the playback side from a passive preamp? Not I.

Okay, got the memo. That settled the question on which of my three sub/sat scenarios worked best and why.

We no longer occupy a flat or townhouse but freestanding dwelling. Now it's sheep not wall-coupled people for neighbors. Playing loud when the mood strikes is on the docket. That too benefited very clearly from freshly minted headroom to demand bassy fare for some residential clubbing. I started with Mercan Dede's "Alef" but left the spinning to actual dervishes. The solo ney rose to unexpected height above my speakers. That was novel.

I followed up with Kayla Scintilla's "Lotus Heart" from the Desert Dwellers' Downtemple Dub Remixed album to imbibe fabulously growling didgeridoo, cross-panned synth bass, scattering marbles and an expertly layered wall-to-wall soundscape. I should have charged myself an entrance fee. A most critical contributor to the utterly boom-free cloudless full bandwidth into the lowest bassment was Hifistay's rack and their matching footers beneath speaker stands and subwoofer. Unleashing very long high-amplitude wavelengths especially from a downfire woofer creates obvious structural impact. One so does not want any of that jackhammer energy to bleed mechanically into the floor then infect gear and/or speakers. Otherwise newfound extension and power take away with the other hand to steal from resolution, clarity and separation. The lower and louder we go, the more this follow-on effect magnifies. Friends don't let friends drive drunk. Neither do they let them subwoof without proper mechanical isolators in place. Those become seat belts.

Why spend time and money on ever increasing resolution only to swamp the midrange with mud and ringing from below? It makes no sense. Enjoying a trouble-free first octave requires more thought than just bolting on a capable subwoofer. It requires effective isolation of everything which precedes the subwoofer in the hifi chain including said bass maker. Without barriers to border-free vibration migration in place, you're better off without a sub. That includes having a noise-free sub to begin with. Here I found that a power feed with built-in DC blocker like Puritan Audio Labs or Vibex makes the perfect antidote to mechanical transformer hum when woofer magnet and plate amp sit too close as they do in the Zu. 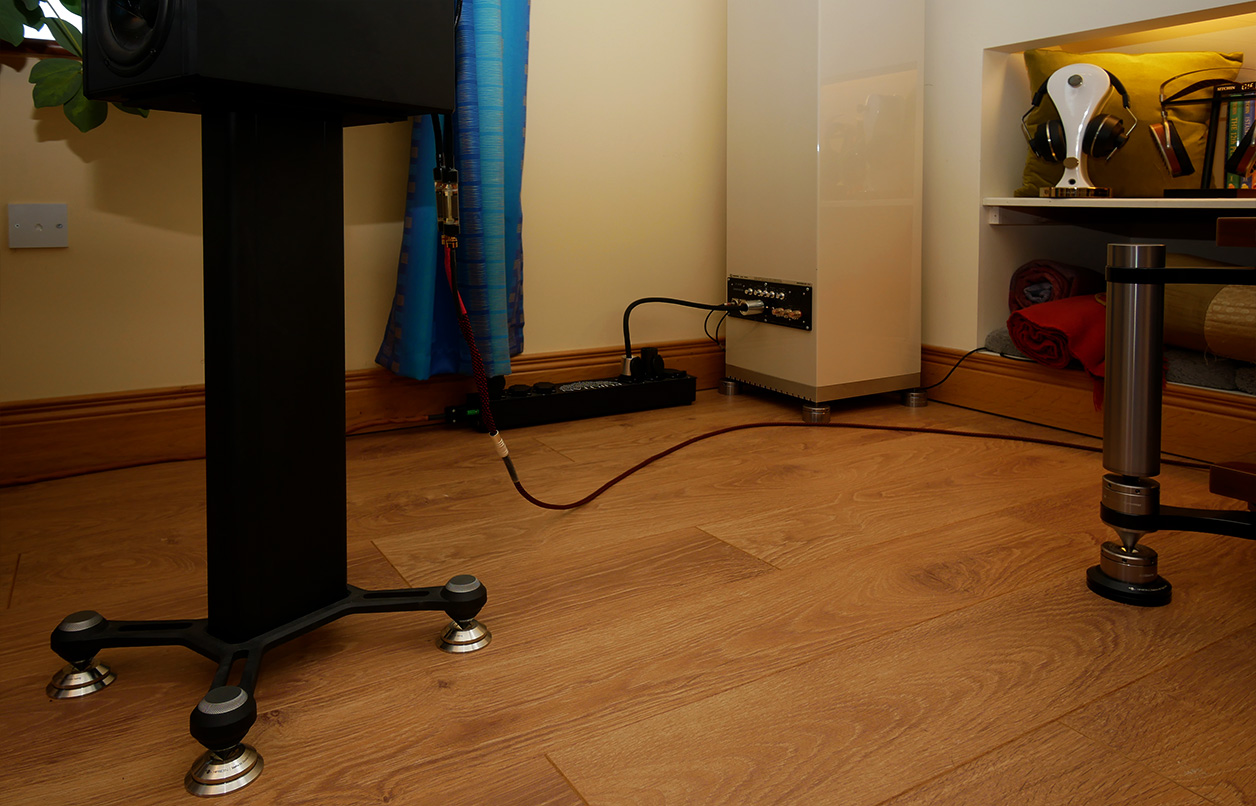 Think of vibration isolators as missing links between gear/shelves and speakers/floor. They're germane to the resolution discussion even without a subwoofer. With one, they simply become critical.