October 12th. The email header said 'message in a bottle'. It might as well have been signed Pál the somnambulist. "Thanks for your patience and sorry for my long silence. With my strained 'manufacturing', I have little time even for basic needs like sleeping and eating. In the past month I shipped more icOn than during the entire year prior. After outsourcing CNC machining of the rear plates, enclosure production still remained far too time consuming as I had to sit on my small CNC machine for far too long. To speed that up, I redesigned the face plate as well to now have it machined by industrial routers. That way the face plate gets 10 times more expensive for me but saves time to sleep. After two months of strenuous work however, the 4Pro back log still is no shorter. 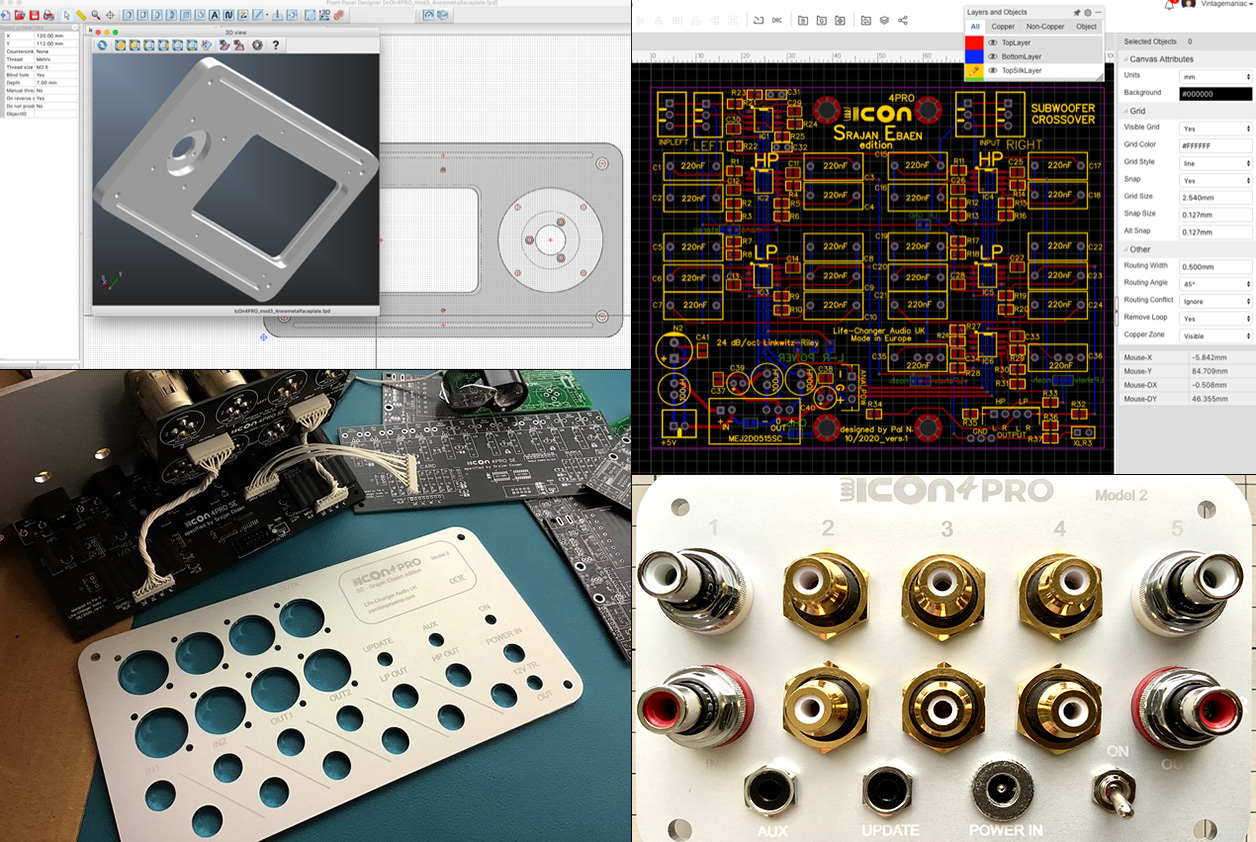 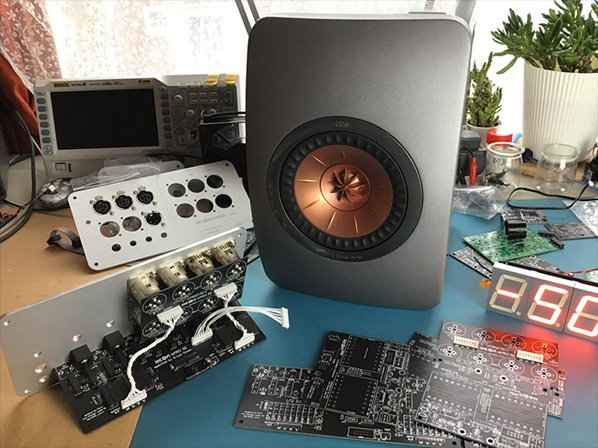 "The good news for today is, I can now work with full focus on the new SE version!

"My weekend chill after the more boring assembly was completion of the subwoofer PCB. Now that's in production and should arrive next week. The laser-engraved shiny back plate and other boards are under testing and I want to discuss your needs for the output selector's activation.

"Each i/o connector is remote controlled. The outputs can work alone, in combination etc. We should find the most comfortable control options for your scenarios. The output selection works with the up/down buttons of the Apple remote during 'mute'.

"I'll still add some extra functionality to the crossover board like stereo/mono, shelving, which parts can be bridged if not needed. That's because I'll use it myself for a new desktop work tool. That's a freshly acquired KEF LS50. I had to finally upgrade my 30-year old East German monitor for testing nuances between autoformers which after all are icOn's key parts."

I told Pál that my output switching for review purposes would be between RCA1 and XLR1, RCA1+2 or XLR1+2. For the sub, I'd end up with a fixed scenario once I'd tested what worked best: only low-passing the sub either with just Pál's filter or his and Zu's stacked for 48dB/oct. steepness; or high-passing the monitors as well. If the former, I might like to be able to switch the sub feed on/off by remote. That was the extent of my switching needs.

By now I simply wondered. Was there anything Pál couldn't accommodate? Or was he just short that li'l but decisive word 'no'?

"Another reviewer had the same conclusion as you had about the 'no sound' of icOn 4 even though his demo unit was still my own 1-year old icOn 4 and not the new 4Pro which sells like hotcakes."

October 13th. "Because you want to use your SE different than the average audiophile to conduct review comparisons, I think that just the Apple wand with its seven buttons won't be convenient enough. I have another programmable remote with six extra buttons. Its up, down, left, right, center, mute and menu buttons duplicate Apple's remote but the additional six buttons will have special functions for you. What do you think?" 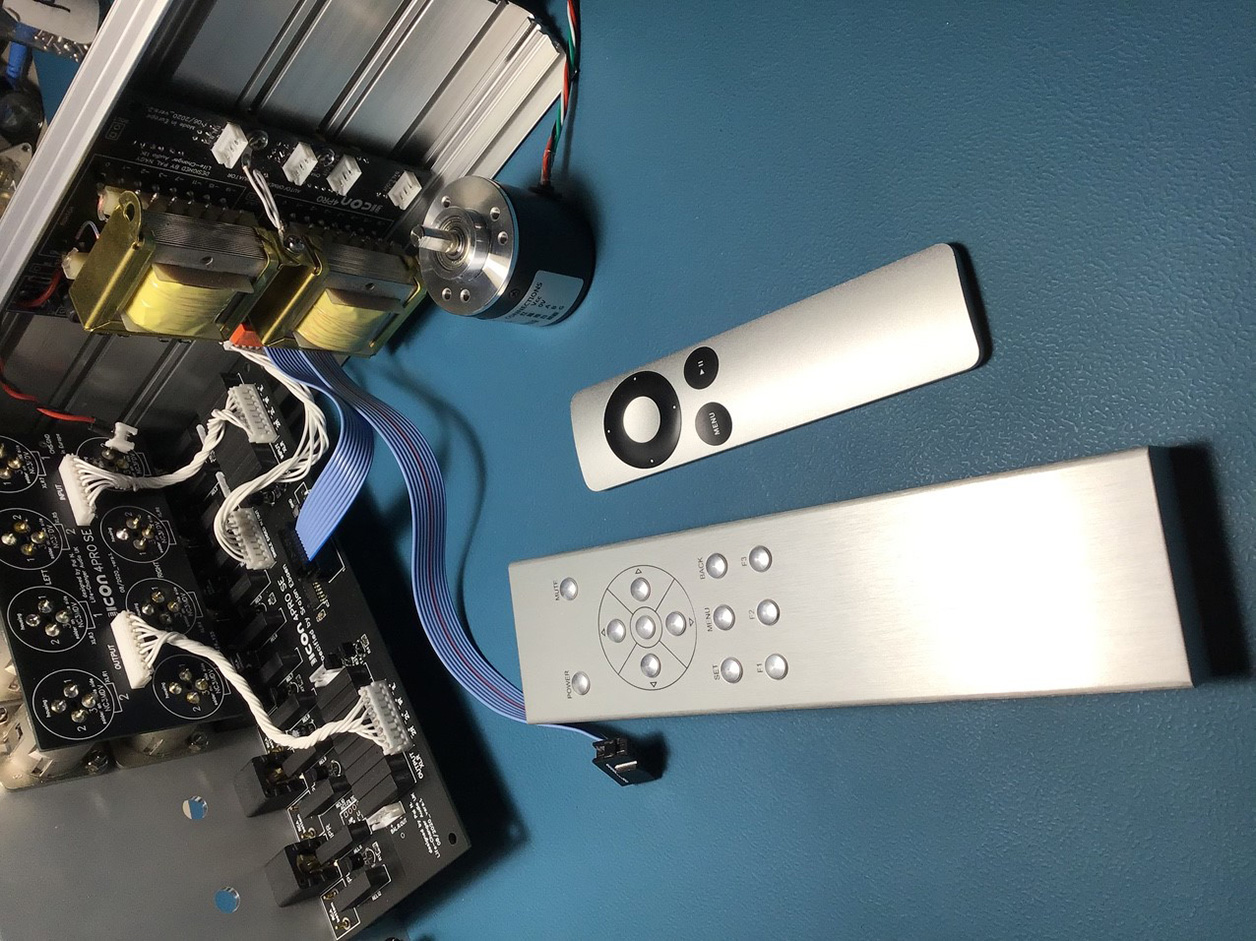 Wow. I asked Pál to code F1 to toggle between outputs RCA1+2, F2 between XLR1+2, F3 between RCA1+XLR1. One of the three spare commands could then turn the low-pass on or off to trigger the subwoofer from the chair. Special Edition indeed. Ever tireless, Pál pointed out that I still had two uncoded buttons. So I asked whether 'set' could switch all active outputs to mono, then back to stereo. "The programming of the mono/stereo change is easy. My big question is on the best way to mix the left and right channels to mono. I'll measure the possibilities and share the results."