Posh not poncey. Moving to the big room, I thought of Ashley's $25'000 Goldmund Telos 590. I reviewed it. In a survey on five integrated amplifiers, Roy Gregory too has spot-on sonic descriptions for it on TheAudioBeat.com. So I figured that as closest domestic stand-ins, our LinnenberG Liszt would be ideal. As it turned out, heading for always-on transistors by way of the Pass Labs XA-30.8 was better still. Very best was CanEver's Olimpico. That threw 70/140w into 8/4Ω onto the class A scale. Very unusual, its 2-stage circuit of valve voltage gain and just two lateral Mosfet per side for current gain transformer couples from input to output. To complement the marriage of Olimpico and Hylixa, I went to our tube stash for the Vinnie Rossi preamplifier. I currently have four very classy options from my friend Dan. From Western Electric 300B and Elrog 300B to Western Electric VT52 to Elrog ER50 and in that sequence, the textural/timing milieu shifts subtly. It proceeds from a mellower half-shadow night-time mood to brighter more lit-up daytime vigor. Compensating now truly heavy bass and rich glowing colors best were the ER50 with their lucid-mode timing and top-end brilliance. 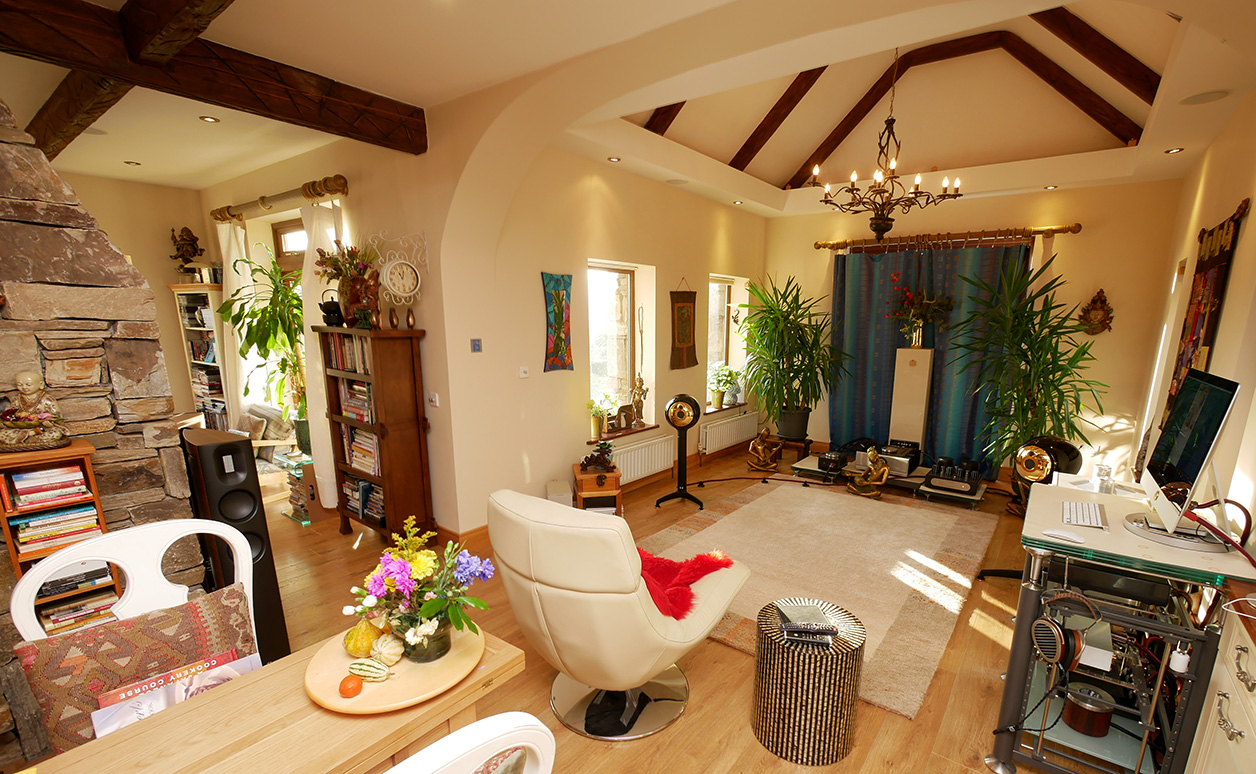 Like it had upstairs, Chris Ellis' diminutive flat-membrane BMR was superbly quick, lucid and deep-throat open through the presence and lower treble bands. The 'super 45' direct-heated triodes in their grounded-grid circuit added faint luster to the brilliance region. The powerful Mosfets through big output transformers expanded bass power, exerted grippier control and punched up dynamic welly. 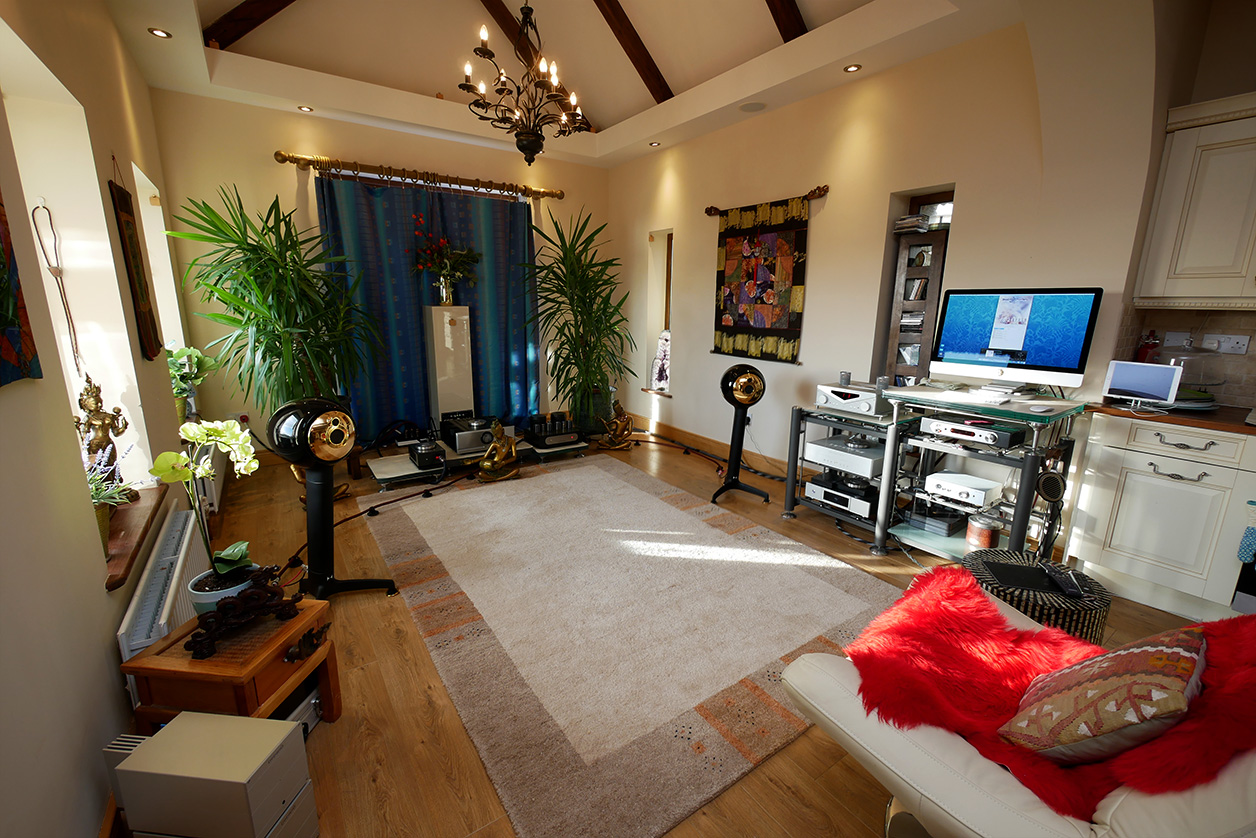 The upshot was strategic optimization based on my prior upstairs diagnosis. The key ingredients were a refined muscle amp to make the small hidden woofers behave as butch as possible; and a larger space. The latter moved up SPL for equivalent room fill. Both together overcame some low-efficiency drag. That delays fully-awake showing up on the volume control. Some speakers are hifi whisperers. Hylixa isn't. Playing these louder because a room's cubic volume grows to increase distance losses and because higher SPL are always more comfortable then… it's what kicks these shiny eggs into their round little arses, thus a band of higher torque. Now they have full traction to really shine.

Regular readers know. I studied classical clarinet at the conservatory to play in orchestras. Both my siblings still do, professionally. It's why I don't really listen to large-scale symphonica at home. The gap, from a live concert's roaring oceanic power to playback's relative teapot tempest, is far too great to bridge with much emotional persuasion. However, spinning up truly big stuff does take the pulse on a hifi's ability to remain stoic under full assault. If not for pure pleasure, it's a vital exercise to tick off. Given Hylixa's virtual transformation from size L to XXL, I cued up Antonin Bruckner with maestro Sergiu Celebidache helming the Münchner Philharmoniker. If anyone harbored doubts about advantages of true point-source radiators to remain steadfast and sorted when things feather out and layer up to enormity, Hylixa would teach them a counter-intuitive lesson. Win by KO. 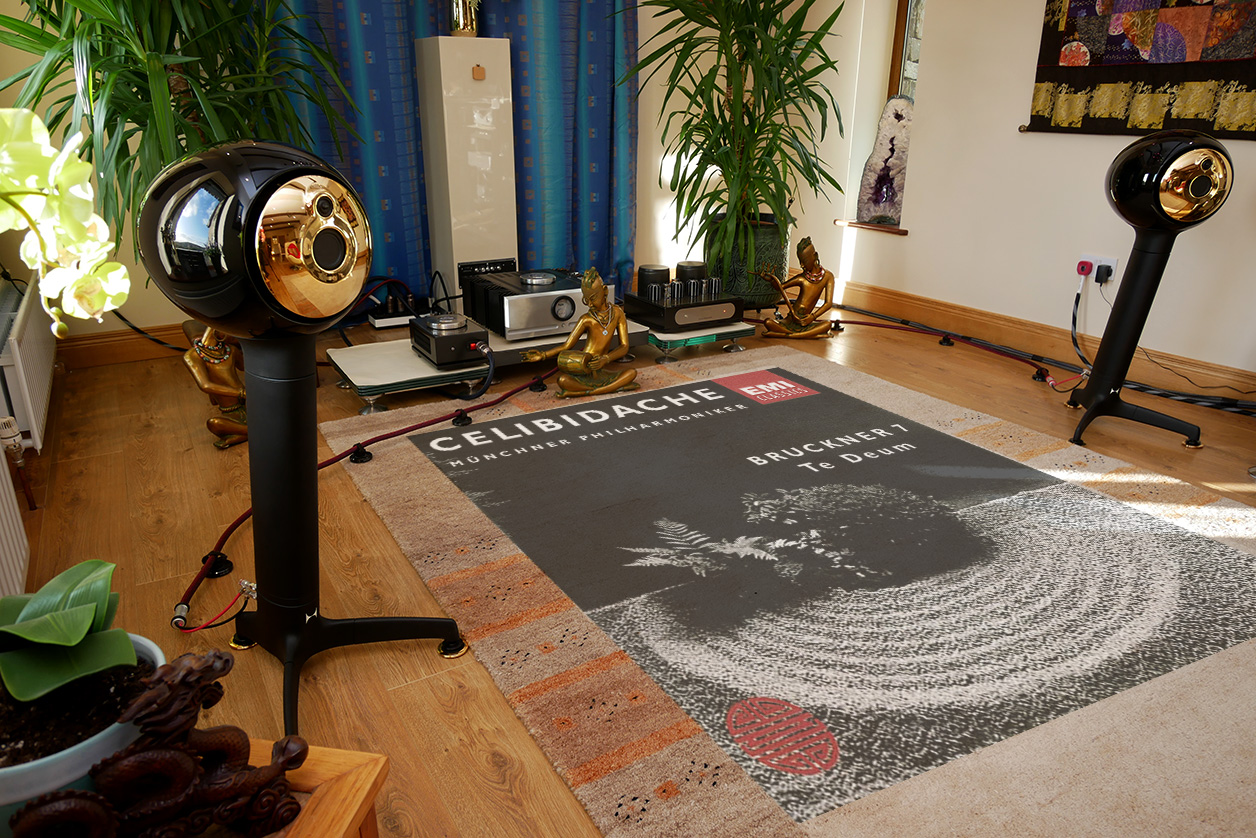 Low-mass cabinets which don't store energy to let go rapidly must enter this equation, too. Our full-aluminium Acelec Model One are likewise rigid to the 't' but pursue it with raw mass. So they become noticeably heavier than Hylixa. That sounds different. Something about it is drier, just a bit stiffer and energetically not quite as free. On the right electronics, Hylixa behaved outright gushing. Versus high-efficiency widebanders, this design simply takes more SPL to morph from slightly sleepy to fully charged. As the €6'500 class A Pass demonstrated, for that one doesn't need ultra-priced amplification. And it's not even about bloated power ratings. After all, the XA-30.8 rates at 'just' 30wpc into 8Ω. But it uses 20 transistors per channel to deliver high current. That's what puts Hylixa on the full alert which their forward stance already illustrates. In this final hardware chain, Node Audio's creation performed astonishingly, unassailably big. That asked for equivalent tunes to exploit.