After working my way through Aavik's U-380, Crayon's CFA-1.2, Pass Labs' XA-30.8, CanEver's Olimpico and Bakoon's AMP-13R w/without Nagra's Classic Pre/PSU, I had a good fix on Hylixa's upstairs demeanour. It'll come as no surprise considering the ovoid enclosure and continuance into a stand with curvy cross section that common absence of diffraction effects plus…

… point-source radiation off a small circular baffle meant absolutely superlative soundstaging. Whilst undeniably pretty, this same form factor was also undeniably effective at subtracting itself from the playback experience as any localizable sound source. All small speakers are good at that but the Brits pushed that skill to the extreme. Yet that was only the first evidence that with Hylixa, style and substance, luxury and high performance do mesh like the interlocked fingers on praying hands. Likely because the circular baffle gap emits the front/rear radiation of the hidden woofer summed to include a small time delay, bass textures were on the warm/bloomy not snappy/dry side. Flowing into the same equation was the typical difference between front- and downfiring subwoofers. The former deliver the stronger direct shock waves which the latter mellow by first reflecting off the ground. Despite surprisingly big bass that was just a bit portly in fact, its impact didn't rise as sharply as it does with line-of-sight woofers. As such the power region lacked some crunch. 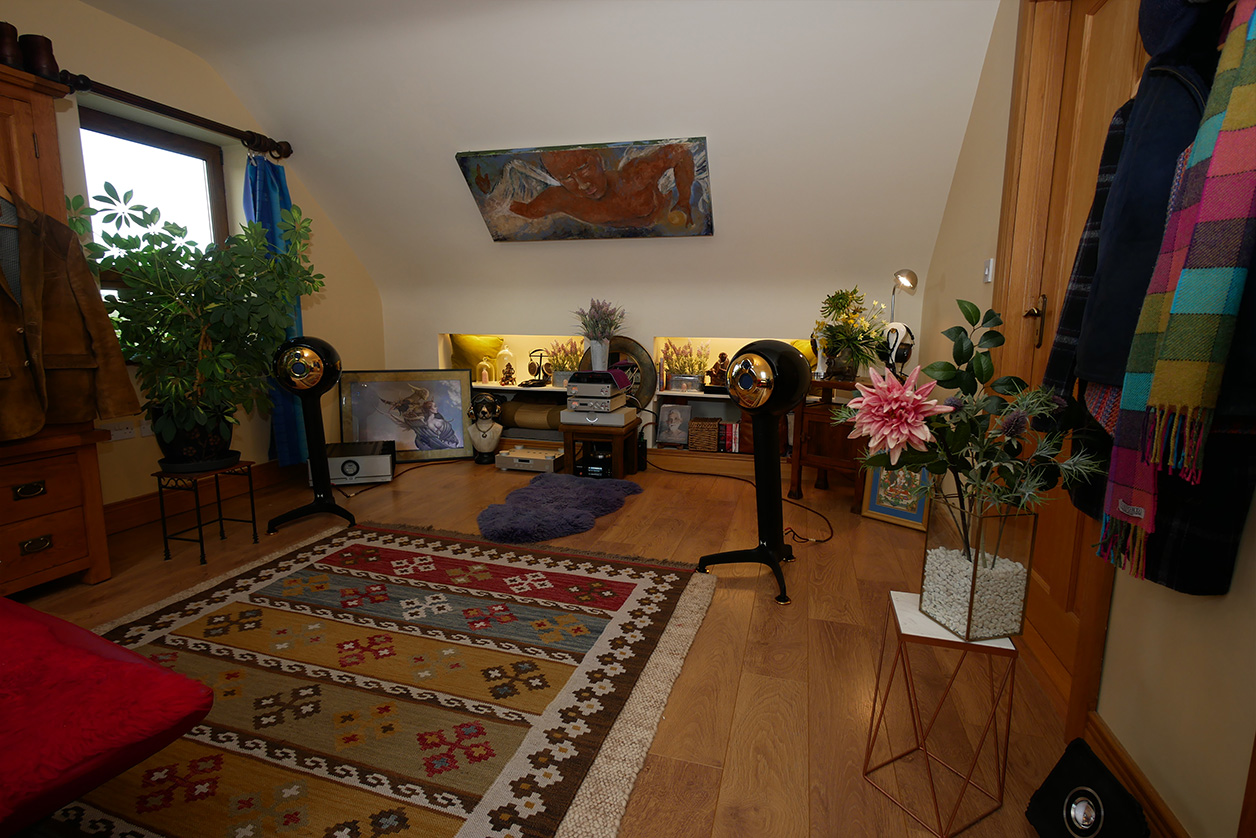 With a small flat driver of exceptional off-axis response jointly handling midrange and low treble—for the latter it's quite a bit larger than ubiquitous 1" dome tweeters—the 3-6kHz region where the fundamentals of high cymbals live not only had unexpected energy but very good decay stiction. Following the fades of high-pitched singing bowls, triangles and gongs was a rare delight.

It's the follow-on region of brilliance and air which went subjectively softer. Partially it might have been absence of typical HF noise caused by diffraction but the practical upshot was a slightly mellow top end which Germans with their love of compound words call Langzeittauglichkeit. It unravels into long-term suitability as the gift of extended listening sessions without fatigue. Here it meant zero tizz, fizz, hash or aggression. 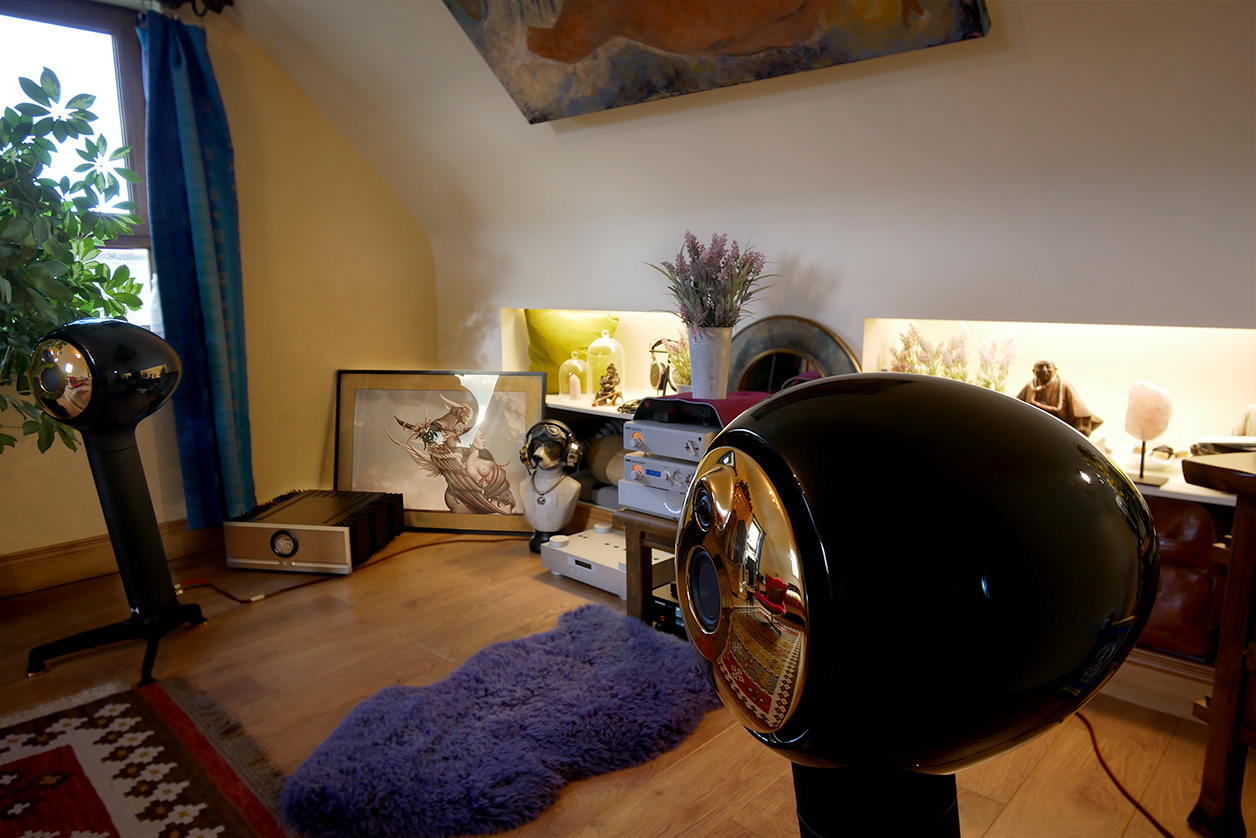 It's a hifi truism. Monitor speakers stage big but lack the same fortitude on body and dynamics. It's a score where Hylixa reset some markers. Remember the 200Hz-down range of the hidden TangBand woofer? With its 2nd-order low-pass, there's useful output to 500Hz though the progressively damped transmission line will effectively attenuate most that driver's higher content to only reinforce its lower reach. Just so, the former still couples to the helix to carry its bloom. That makes this compact speaker act counter-intuitively big also in those non-soundstage areas where larger floorstanders dominate.

Calling this a small speaker which behaves uncommonly big thus isn't just an endless repeat of that tired old truism. It tacks on some extra qualities which usually aren't part of it. With a very quiet cabinet for very low so-called box talk, microdynamic differentiation was high. But because only small drivers do the business, the helical innovation can't overwrite natural limits on macrodynamic contrast. That distinction isn't about raw bass quantity and tone density where Hylixa does transcend common monitor limits. It's about dynamic torque. That would need a bigger engine for bigger displacement and higher air-pressure gradients, what in speaker terms is larger cone area and excursion. Ashley mentioned that their helical transmission line looks likely to secure the patent they applied for. Regardless, the now proven concept certainly lends itself to being scaled up. If Hylixa sales turn out substantial enough, there just might be a bigger model around the ARCC?

At this precise juncture of the narrative, Magico dropped their A5, a 180lbs 5-driver 3-way tower with 28mm Beryllium tweeter, 5" carbon/graphite midrange and 3 x 9" graphene-based woofers in a 6061 aluminium enclosure with 4th-order filters using Mundorf's brand-new M-Resist foil resistors. Priced at $21'800/pr so a league below Hylixa, it reiterates once more how Node Audio most strongly appeal to an audience other than hardcore audiophiles who for this coin pursue more drivers, massively increased weight, bigger bandwidth, higher SPL and far more established brand cachet. An A5 shopper won't be a Hylixa shopper; nor vice versa. And what's wrong with that?