When asked what else people can expect from Moonriver Audio in the future—George remains actively involved in current production so his R&D time is limited—he hinted at a ~130wpc integrated running four LM3886 in a bridged/parallel configuration with integral DAC/streamer section. Another thing he likes about the LM part is its comprehensive built-in protection. It's virtually bullet-proof*. Asked what 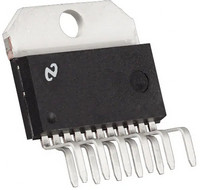 audio quality is most important to him, "S/NR and dynamic range. For that you need a superior power supply and proper board layout." My review loaner would ship from George's UK importer who also had a Hi-Fi + review lined up. Darko.audio in Berlin were scheduled for one of their slick video reviews, Stereophile in the US for one of the written kind. With hifi trade shows around the globe cancelled, the press had bigger shoes to fill.

With George's data, it's appropriate to replace my SuperClone moniker with perhaps Jeff Rowland revisited. The unintended trouble with any such type casting is the immediate suggestion of… well, copying. It's really just a lazy way to say that two machines share a key part. Do all ESS 9038 DACs sound the same? Are Accuton speakers, ICEpower class D or amps with Sanken or SemiOn bipolars? Certainly not. Neither are LM3886 circuits. Just so, if this part was good enough for multiple upscale Jeff Rowland amps, it is quite the endorsement. At left we see one of those 11-legged mono critters which rate for 68w/4Ω in class A/B max.

* Texas Instruments: "… this part provides an inherent dynamically safe operating area (SOA). SPiKe protection completely safeguards the output against overvoltage, undervoltage, overloads including shorts to the supplies, thermal runaway and instantaneous temperature peaks." The reader is reminded that all of that usually requires circuity external to the output device. Being an integrated circuit, this chip contains it.

My 2005 Audio Sector Patek with outboard power supply as another 47labs not Jeff Rowland homage of a chip amp. Likewise for the AkitikA GT-102.

More from the application notes, "when bridged and parallel configurations combine, the outcome is a very high-power solution that far exceeds the capabilities of one IC alone while maintaining reasonable power dissipation levels within each. The bridged portion doubles output voltage swing and quadruples total power dissipation while the parallel portion halves the current between each IC set and divides the total power dissipation between each of the four ICs. The result is higher system power with each IC not exceeding its individual dissipation capabilities. The bridged/parallel circuit of four devices will produce the maximum output power (>200W) into 4-8Ω. For loads less than 4Ω, additional devices may need to be placed in parallel or the supply voltage reduced." By now our clones plot has exhausted itself. The note on an upcoming higher-power Moonriver integrated and how its LM3886 configures then put a final stake through its deceptive heart. If we absolutely must, we'll continue to think 'Jeff Rowland revisited'. Best and most accurate of course is to view these Swedish circuits as George Polychronidis'. They are. But now we have a general appreciation for the lay of these lands (DIYers of high-power LM3886 amps can go here). As far as it went, the ploy did its work. Now ends our detour to put us back on the main highway full speed ahead: Model 404 Reference.

Its tidy remote is very much like Apple's signature wand, just black. The same round twist-lock cover for a standard CR2032 coin battery lives on its back. Unexpectedly the 1-4 input buttons duplicate on the back/next controls which simply switch through the inputs sequentially in either direction. 'M' engages the monitor loop, 'mute' confirms by extinguishing the central yellow LED. Because an equivalent yellow source LED remains live, one still sees that the machine is on. 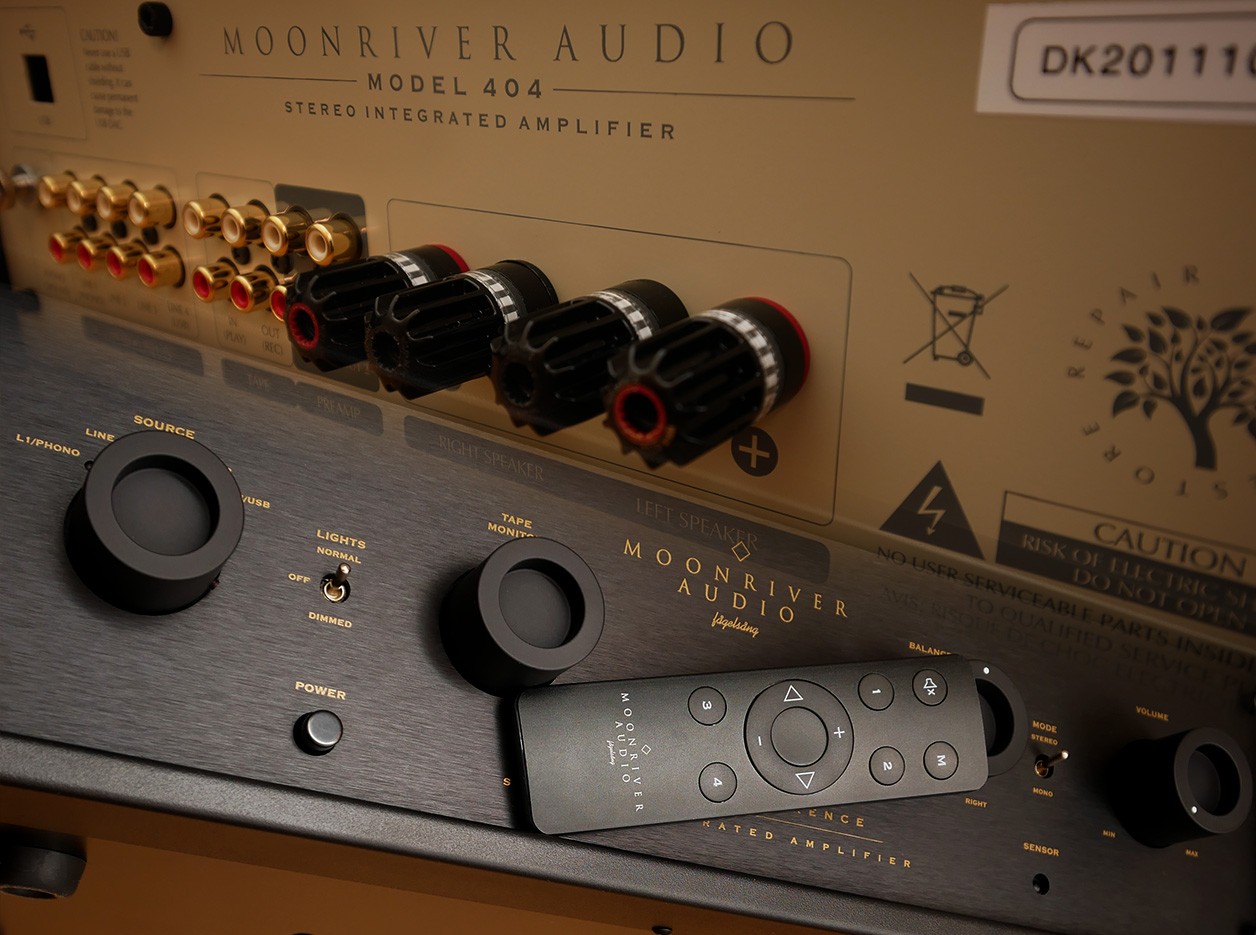 Under the thick bent sheet metal cover with two inner strips of damping material one finds these innards. A central U-shaped heat sink is dedicated to just the two LM3886 chips. Even after 24 hours of idling, that metal bracket got barely warm to the touch. In my loaner, the shiny barrack for the optional phono stage was empty since I don't do vinyl. Two headers and a stand-off receiver anticipate the forthcoming DAC board. Three red dip-switch terminals adjacent to the RCA inputs are set according to how the machine is configured. The volume control is a motorized Alps pot, the balance control is purely manual but with a center detent for tactile bypass. Powering up creates a brief flash of yellow LEDs which is duly followed by a fat relay click, then the chosen input's LED comes on, then the central indicator. That's it. Listening to a hifi shouldn't be complicated. 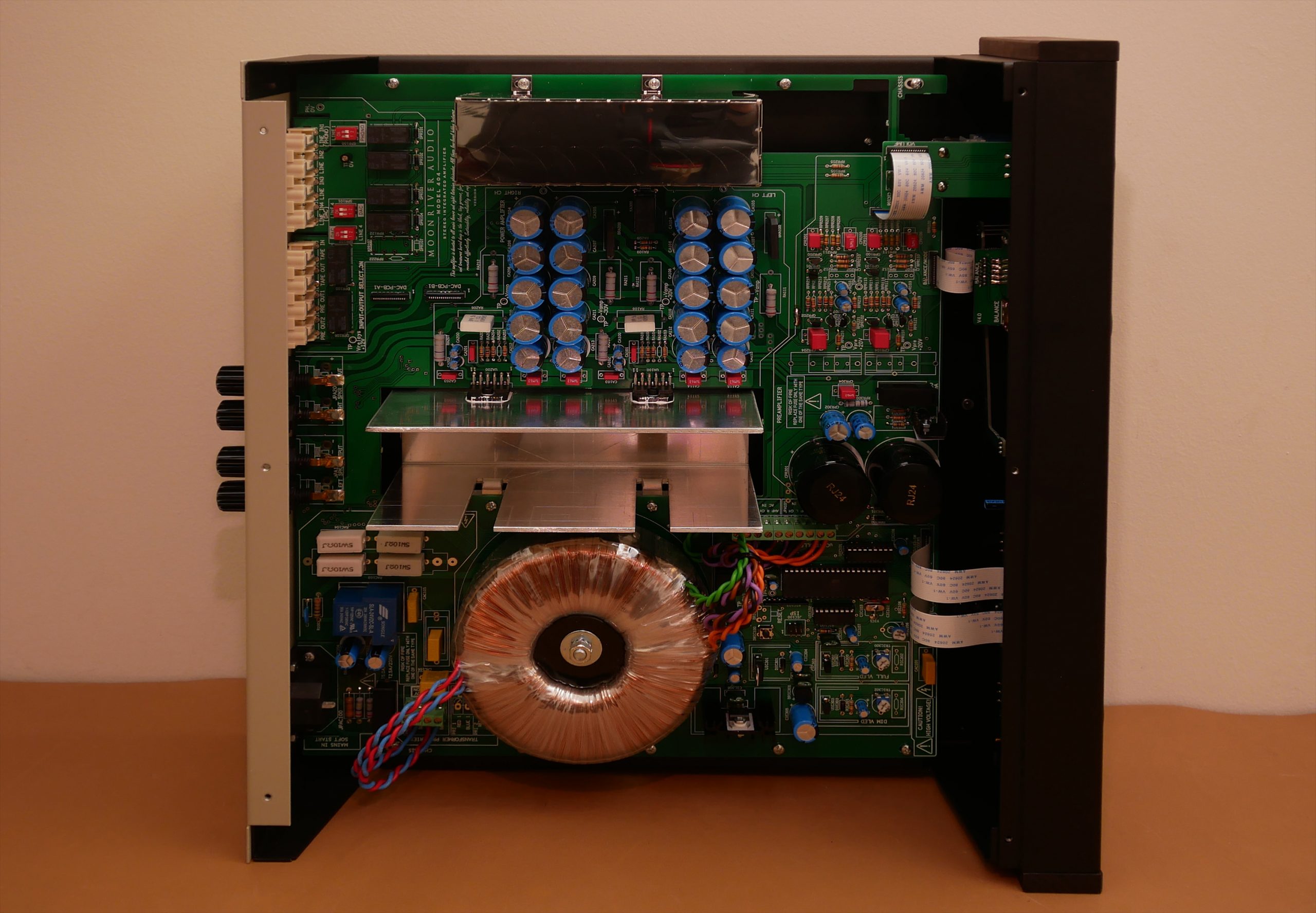