From the get, the Reference played gotcha. There was no mistaking its propulsive temperament, its dynamic aptitude, its red-blooded guts. This was no pale office clerk crunching numbers with studied boredom. This was a muscular dock worker handling heavy goods with good-natured energy and obvious ease. The gotcha? What else do we expect from an outsized power supply? If you didn't think the earlier photos were outsized evidence, remember. 50wpc/8Ω peak power so more like 30Wrms. One lone output device per channel. Class AB bias. Not gaincard bonsai audio. For our purposes, the 404 Ref lays it on thick and sounds it. It makes the meaty locomotive sound one hopes for from Harbeth, Spendor or Graham speakers which generally aren't persnickety vegetarians or inbred anemic blue bloods if not US-bred bass heads either. 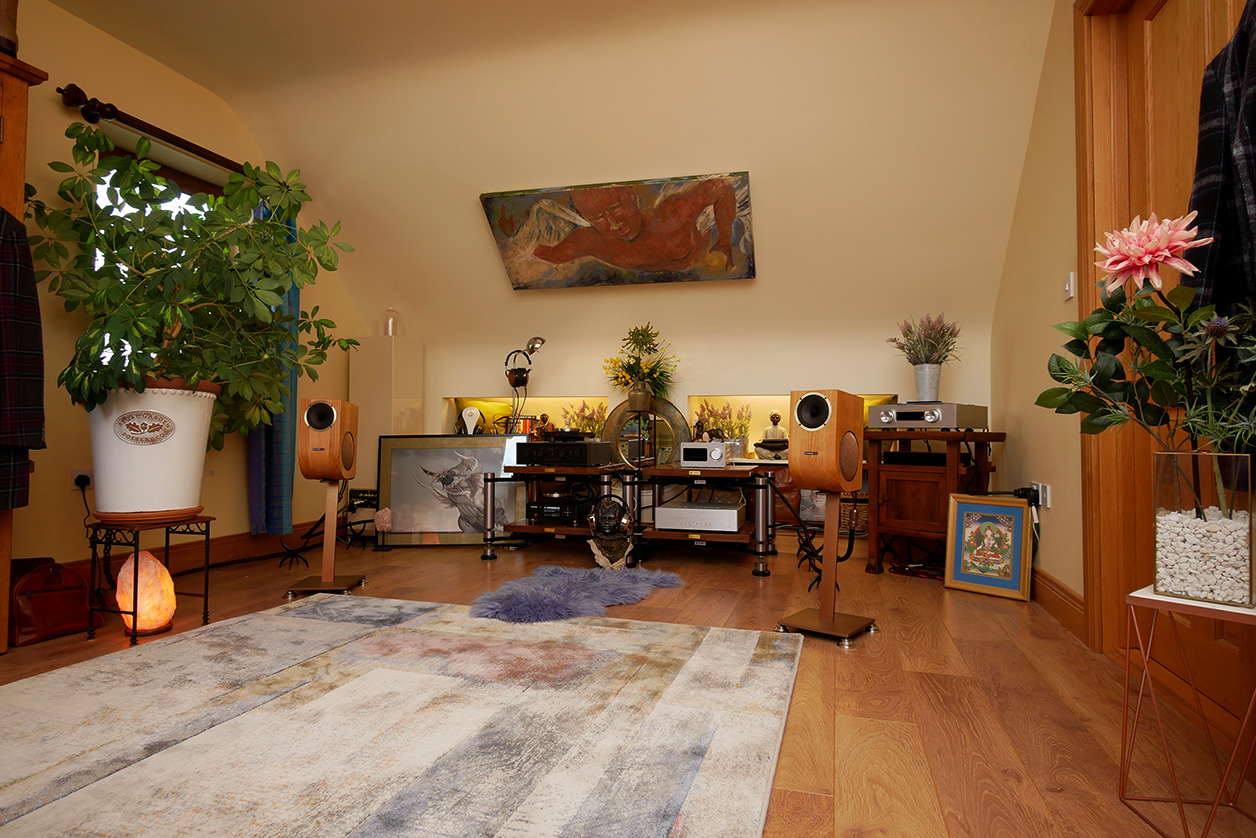 It's not a resolution-first sound of minutiae. What the Moonriver resolves instead is chunky tone, dynamic pressure and bass balls that have dropped for an attractive power zone and firm foundation. This attitude and aptitude already inform wispy female vocals like Anna-Marie Jopek in come-hither mode, then kick in an extra gear on heavy Yello grooves. "Yeah but… my recordings are washed out and thin. Shouldn't they sound that way?" If that's your belief—and it's perfectly legit—the 404 Ref won't be for you. You'll constantly accuse it of making things sound better than they ought to. Fair enough. George's integrated doesn't aim at spoil-sport idealists but practical people which "from a personal development point of view are the ones who omit useless and unimportant details for the sake of reaching bigger and more important goals". Let the idealists debate bigger and more important. The pragmatists know. Compared to live music, virtually all hifi falls short on tonal robustness, in-room presence and dynamic conviction. Call it lack of gumption. Increasing that is the 404 Ref's bigger more important goal. To mint an Ahnuld, it's the gumptionator.

Reader Ahmad Daniel Matsah: "This is regarding Cube Audio's Nenuphar Mini with one Cube Audio Sub 12 pairing. 90% of my listening leans towards rock and metal. In terms of amplifier selection, which brand/model will have the greatest synergy with my speakers for listening levels rarely exceeding 95dB while assuming perfect balance of strong 3D holographic imaging, a wide soundstage, thumping bass for rock and metal, details at low listening levels and being forgiving/musical?" Ahmad had also specified a 15m² room. Small room + 95dB peaks + widebander + rock and heavy metal + musical and forgiving = milk-giving carp. Just so, if an amp could hit his conflicting aims, the Moonriver ought to. Carpe diem. 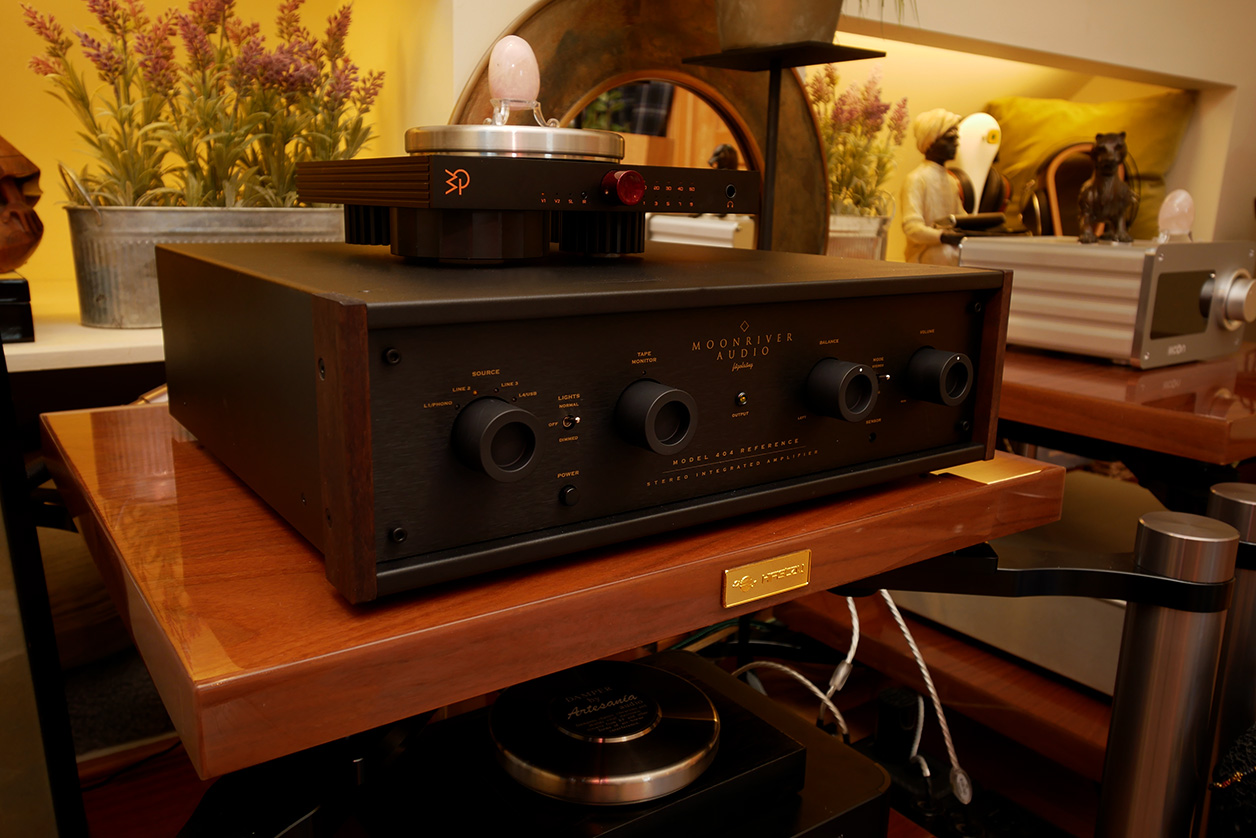 Now you have my first impressions. I penned them off the cuff to capture the spur of those moments. To get fiddly, I had our usual 25/50wpc into 8/4Ω Bakoon AMP-13R as the familiar comparator. It adds another grand to the bill, takes away much functionality but adds extremist headfi, then tracks the Swede with class AB transistors by way of lateral Exicon Mosfets, one per phase. As you see, it's also a fraction of the 404's size. What you can't see is that its volume control isn't a pot but switched resistor array. That sets the actual amplification factor of its circuit for constant S/NR regardless of level. Whilst both integrateds are closely matched on power, the Bakoon looks like a toy. The Moonriver looks like a proper he-man amp. That quotes Stereophile's erstwhile Corey Greenberg. Hey, one mustn't underestimate the role basic psychology plays in sales. It's why George's specs show peak not RMS power; why they don't mention a 4Ω figure. If people reflexively assume 100wpc/4Ω just to lend an ear, it leads them to this well to drink. Cheers. With proper taste in mouth, specs evaporate like morning dew. Theory vanishes, real practice takes over. The Moonriver 404 Reference is plenty powerful indeed.