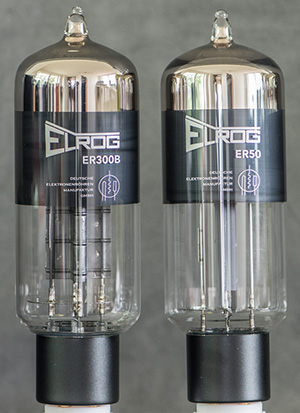 Following my nose—it's long enough—I cracked into our little aluminium tube case. Out with the Elrog ER50, in with their 300B. The 50 triode is often called a 'super' 45 because of its similarly lit-up lucid quickness. It's a 7.5V variant which our preamp runs at 5V like any 300B.

This swap of two bottles instantly fattened up the midband. It also took the foot off the treble gas. But I remained aware of strange noise which acted like dirt in a spring onion. If we forget to rinse before chopping it, that dirt gets between our teeth. Gnash. My strange inter-note grit hadn't been audible with the Liszt monos. Those had rinsed properly.

While the tonal balance was centered if a bit cool, the overall critical balance remained precarious. Had I bitten off more bandwidth than I could chew? I could put more time on these amps to eliminate insufficient break-in from the list of suspects. Otherwise more resolution reads swell but if in actual use it kills off too many recordings, it turns to swill. Then I'd give up extreme detail magnification before letting it limit my musical choices.

I hadn't faced that before.

If I couldn't resolve this, the Kinki twins would end up in a less critical system. Then the Liszt brothers would stay in the main rig and probably smile to themselves with barely concealed glee.

Once in the 2.0 video system, the EX-B7 sounded flawless between Wyred4Sound's STP-SE II transistor preamp and German Physiks HRS-120 omni speakers. Nothing at all suggested insufficient break-in. Now a suspicion began to creep up. Usually direct-heated preamp tubes couple through output transformers. Those create a useful low-pass effect to block ultra-high frequencies. To the Kinki's DC-coupled inputs, my tubes coupled directly with their own 900kHz/-3dB bandwidth. Was I hearing spurious out-of-band tube noise I'd simply never heard before? To find out, the EX-B7 returned to the main system. I once again bypassed its tubes. Would that peculiar grit still factor? If so, I'd next try the Audio Physic Codex, then incoming Bayz Audio Courante 2.0 for more triangulating. With the video system showing nothing but tremendous clarity on the Kinki monos, something in the main system was off. I just had to figure out what.

The last laugh—ha!—was on the EX-B7. The tubes had been the culprits. Be thy gone, arrant knaves! With the strange HF dither consigned to contemporary cancel culture, I was in my very personal promised land. Hello visions of Vivid speakers and my early Avantgarde days. A writer concerned with brevity would now sanitize his narrative. Eliminate the detour turns. Head straight for the home run. But isn't it far more fun to see a reviewer wiggle like a hooked worm, wonder whether his Mercury just went retrograde before finding deliverance in a very simple solution? With the grainy gritty subliminal sizzle banished, the Kinki monos were instantly fuller and weightier than the Liszt. Hello bonus 1. They were demonstrably faster, too. Howdy bonus 2. On energy, dynamics and electrifying charge, this meant a very 'live' close-to-stage perspective – definitely not a pipe 'n' slippers slumber party. Of course bypassing boutique tubes in a very costly linestage dedicated to them was a sad turn of events but I couldn't argue with the results. Eventually perhaps it will migrate upstairs to revive its triodes whilst Pal Nágy's icOn 4Pro SE takes up downstairs? For now I wasn't concerned with logistic implications. The EX-B7 had just enthroned themselves on the Artesanía amp stands in the main system to bump off the Germans to the video system. This was an occasion to prostrate and welcome the new kings. That I couldn't use the preamp's XLR outputs was immaterial. As a single-ended design, those are generated electronically so one can easily argue that RCA is the more purist connection. 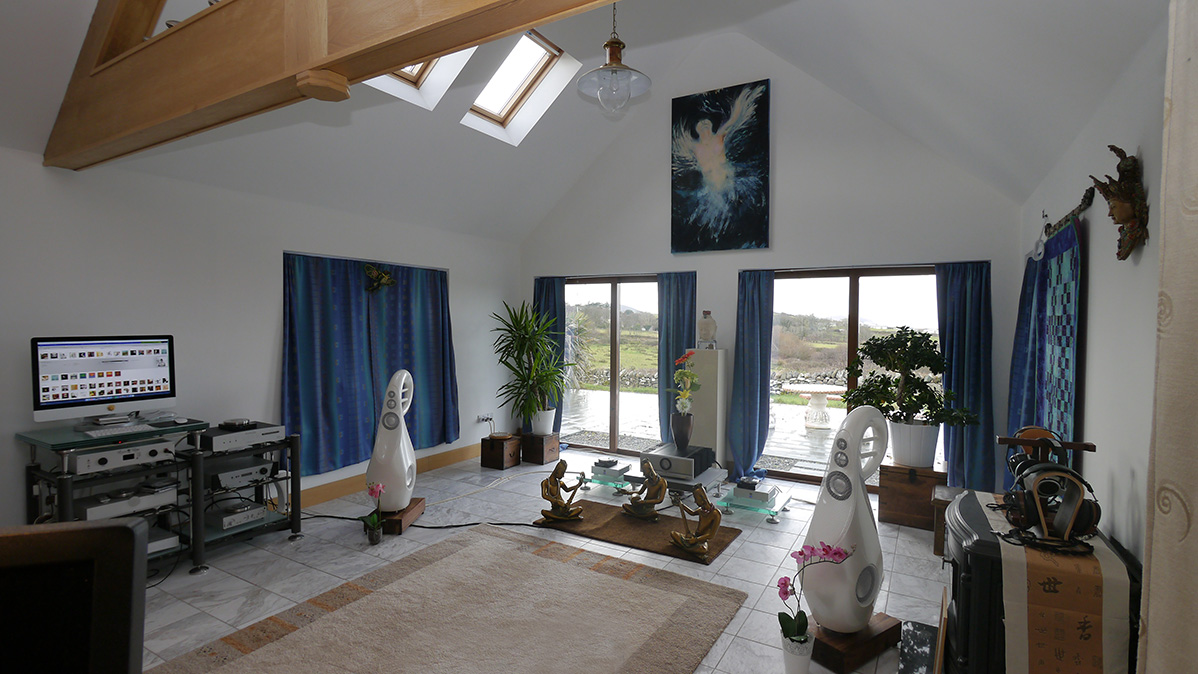 Bonus 3 was a virtual high-torque high-traction bass gear like a Jeep's crawl mode. I had more stiction, grip and definition. I had more clarity so heightened light and visibility on dark bassy tracks. The biggest probably aggregate makeover was moving from fifth to front row center on perceived energy. Such virtual proximity ratchets up intensity, impact and the tacitness of musical charge. It's the polar opposite of mellow relaxed daydream listening. It's full frontal engagement where attacks haven't yet diffused in the ambient field. The already accelerated Liszt were still mellower and energetically more removed. Truth told, I hadn't anticipated such untapped headroom on said score. That went above and beyond buyer expectations. Yet there was nothing inherently trying about it save for any such more direct engagement naturally consuming more of our attentive resources. It more quickly exhausts our capacities. Where a more laid-back perspective might support 2-hour sessions because we're loafing, a nearly on-stage perspective could last just 45 minutes because of its sensory overload. Then we must recharge our nervous system batteries. Having multiple systems helps. Rather than tune them all up the same, we can tweak for different moods. What the EX-B7 brought to my downstairs party meant a closer seat on the action with all that entails. I thought of it as an unexpectedly potent adrenaline injection. It's why I mentioned Avantgarde and Vivid speakers. Unless deliberately slowed down by gemütliche gear, they exhibit these very same qualities. Now I had that flavor from far smaller more affordable speakers with far simpler filters. [This photo of Vivid's smallest Giya 4 was from our last house.]