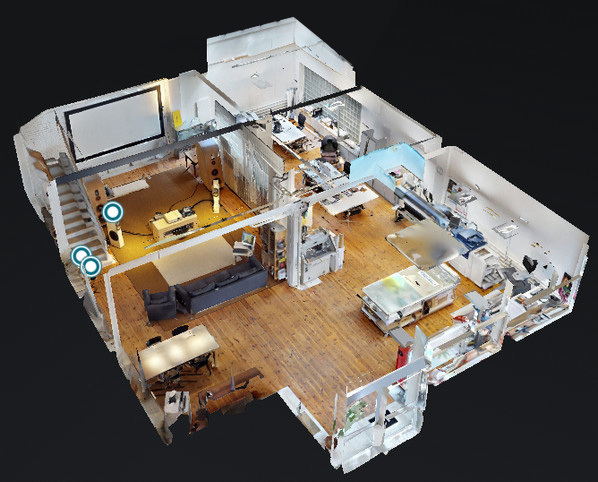 For a 1st opinion on the W8, from Warsaw correspondent Dawid Grzyb, there's this 2017 review and the photo montage below with the ambient tweeter in real closeup. With David Graham of the UK's Whole Note Distribution having just signed on the dotted line for this line, the time was right to revisit this speaker from now just one isle over. [For a virtual 3D tour of where Boenicke speaker are voiced on the mainland, click on the right image.]

As a properly sporting chap, David offered to first put some time on his demonstrator model before forwarding it to Ireland. It would be the standard version as the most cost-effective way to get into a Boenicke floorstander. If you want Sven's Swing Base as included with the SE/SE+ versions, that's extra. The Standard delivers as shown below. Whilst the upper rear slot is the port, the lower slot receives the Swing Base or its plinth version. With mirror-imaged woofers, one obvious decision to be made during setup is whether to fire them in or out.

According to audiophile.ch's W8 measurements, sensitivity is a very low 81.5dB/1m/2.83V¹. The impedance plot shows 6Ω, 7Ω and 13Ω peaks at 26, 65 and 1'100Hz respectively, 4Ω troughs at 35 and 200Hz and a 3.5Ω trough at 5'000Hz. Nominally it's 4Ω. All of it favors a high-current amplifier which returns us to the aforementioned P1. In our digs, similar horse power would come from the 200-watt LinnenberG Liszt monos upstairs; and 250-watt Kinki Studio EX-B7 downstairs. As it happened, Sven's P1 arrived a week prior for planned synchronicity. Getting that amp guarantees buyers—and in this instance, your Irish proxy—to experience the W8 just as its creator did in his large Basel workshop.

At this point UPS dropped the W8 shipment to the UK from such a height that the impact detached two magnets. Being properly packed, the cabinets were fine—no spear fishing by fork lift—but the lot had to return to CH for inspection and driver replacement. "In the UK, UPS are particularly brutal" quipped the importer. With the speakers returned, he then had to find one shipper happy to do UK⇔RoI. Being early post Brexit days, many freight forwarders hadn't caught on yet with the new docs and process. They preferred to refuse business instead.
______________________________

¹ "81dB is actually not correct. There is a deliberate decrease of energy in the mids—a 2.2mH coil for the 4" driver with deliberate 2.5Ω resistance—which perfectly mirrors the combination of ear/brain sensitivity irregularity and common listening-room reflection irregularities. If you average all this, you end up with a ~85-86dB sensitivity. In audiophile.ch's frequency response graph, it also seems that they subtracted room gain via time window. In normal rooms, the W8 go flat down to about 30Hz." 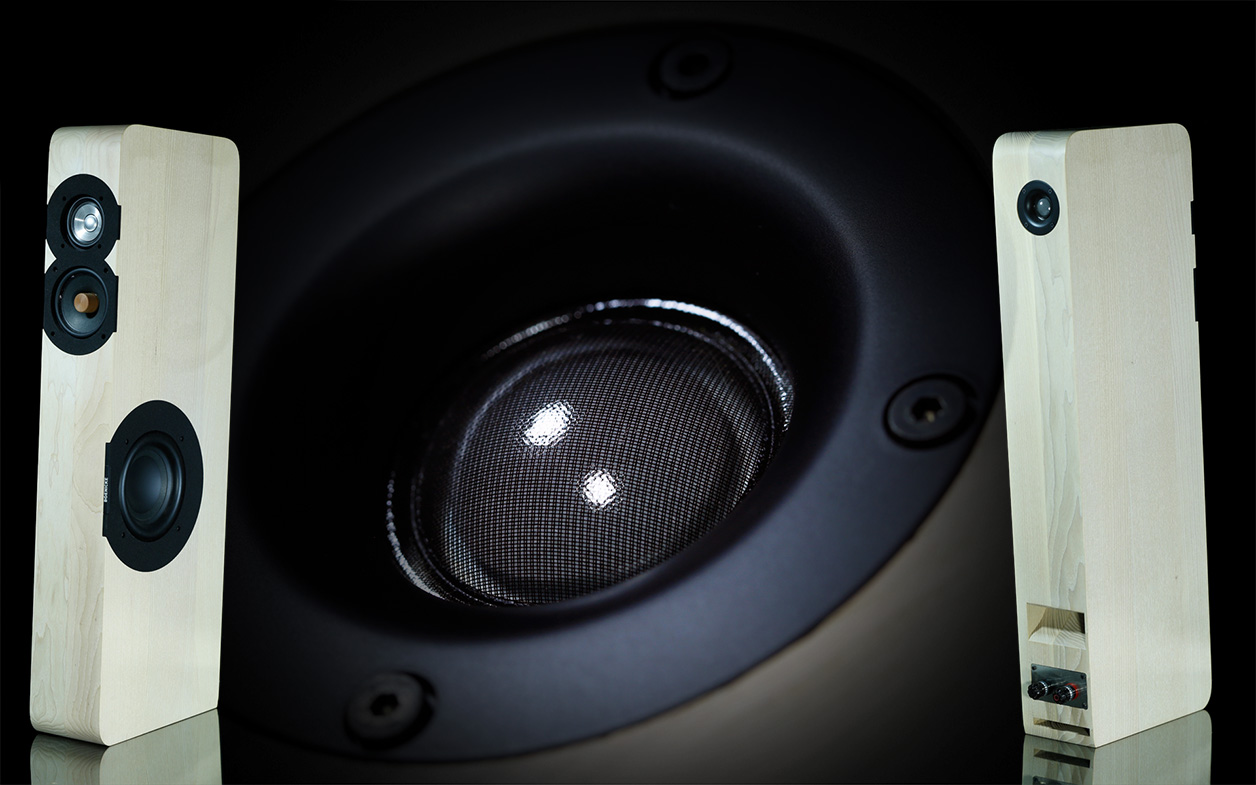 I joked with David that if Ireland was suddenly out of bounds, so would be the Germans, French, Poles and all other Europeans. Surely UK shippers wouldn't turn their backs on us all? And there you thought hifi manufacture was just about making good stuff. Getting it to us in perfect nick is part of the game. That can involve huge fouls. A personal hifi purchase recently languished in Dublin customs for six months! When FedEx finally delivered, they only brought one box out of two. To locate the second meant two escalation files and another week of numerous phone calls waiting for the dreaded muzak to stop and a live person to come online. Hello Mumbai call center.

Once David removed his planned pallet from the equation to place original shipping carton inside bigger outer for extra protection then specified business not residential delivery—being one and the same was lost on Parcel Broker—DHL accepted his shipment. Why the fuss? Full-size heavy pallets require delivery by lift-gate lorry but semi-truck drivers despise crooked narrow tree-lined country lanes. They might have to back out long bumpy stretches under poor visibility barely clearing the trees. So they focus on business deliveries in towns where lorries double-park, drop pallets on sidewalks then rush off. Standard white-van drivers for the hinterlands meanwhile neither have room nor jacks for pallets. What if a recipient can't help unload a heavy freight? Now the driver has to unpack it in his van. But given how compact the original Boenicke box was, the DHL driver had no issue getting it out of his van even inside the bigger outer box which wasn't tethered to a pallet. My game was afoot. 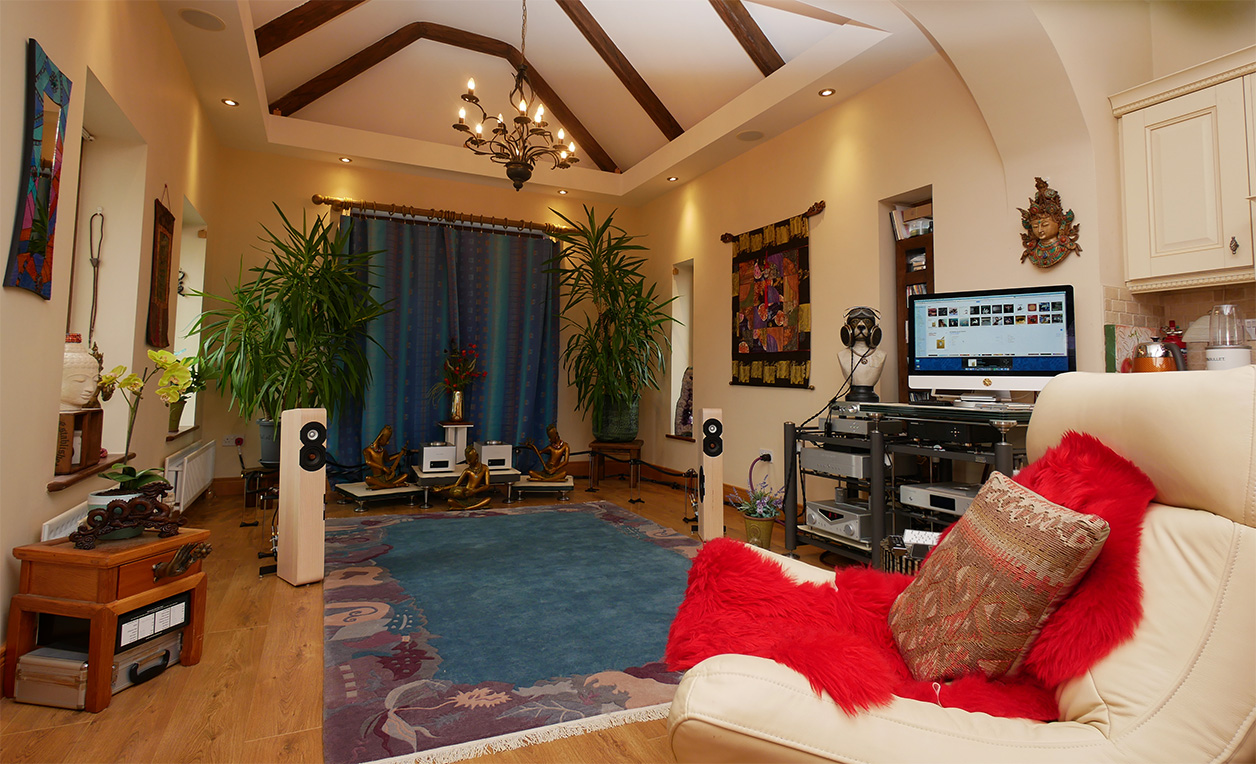 Woofers in was my first orientation.

Until they're installed, one may not appreciate just how petite the W8 are; in our case barely taller than the Artesanía rack. Regardless, they're no wider than a grown man can stretch apart thumb and pinkie. That's a lot of munchkin, precious little domestic dominance and zero tech terror. True, 250 high-current watts per side still need middle-of-the-array volume settings to stand tall. Petite they may be but flea-watt pushovers they aren't. Fresh from transit, these would need a few days to settle in despite being pre-cooked in Scotland.