To curtain or not, that is the question. Remembering Hamlet, I opened the usual heavy curtains across the French doors. With this central soundstage glass exposed, I had more hard surface for the W8's reflective rear tweeter to play with. That opened virtual sky lights on treble energies beyond what the already very capable big Fountek F85 did. For an ace track to demonstrate the effect, take a short walk on the wild side. This won't be to most people's taste. To enjoy this fully probably requires prior familiarity and appreciation for traditional Turkish taksim improv. Never mind, it makes the point, brilliantly. It's from the Cafer Nazlibas album Feryad-i Kemani which translates to Cry of the Kemanche. That's a spiked fiddle which here solos over minimalist ambiance. Constantly varied bow pressure invokes a very dirty effect. Strings break up into flageolet with varying degrees of overtones. Those flicker like a swarm of fireflies around the ascending fundamentals. Many will find this trying to hit 'stop' before it's over; or miss half the action because their dynamic range in the upper midrange and treble is insufficient.

Over the W8 extra enabled now on ambient retrieval with the curtains opened, I could play at full uncompressed throttle without flinching to explore the expanded tone modulations which this bow master culls from his ancient instrument. Though the difference was far from drastic—no floors were mopped, no nights turned into day, nobody blew into the weeds or out of the water—the ultra-bandwidth class AB monos were even more brilliant and informative. To their front-row center balance, the P1's energetic perspective was somewhat more midfield. That would seem to track with Sven's declared preference for monitoring his recordings deeper in the ambient field of his concert venues. His amplifier is just a bit softer on the attack and thus slightly cozier than our fresher more incisive monos from China. Again, this wasn't a big difference but when honing in with tracks like this, demonstrable. The EX-B7 walked still closer to the stringed edge if you will. I love that. Others will prefer a slightly tamed perspective by moving a few virtual rows back. They'll favor Sven's amp. 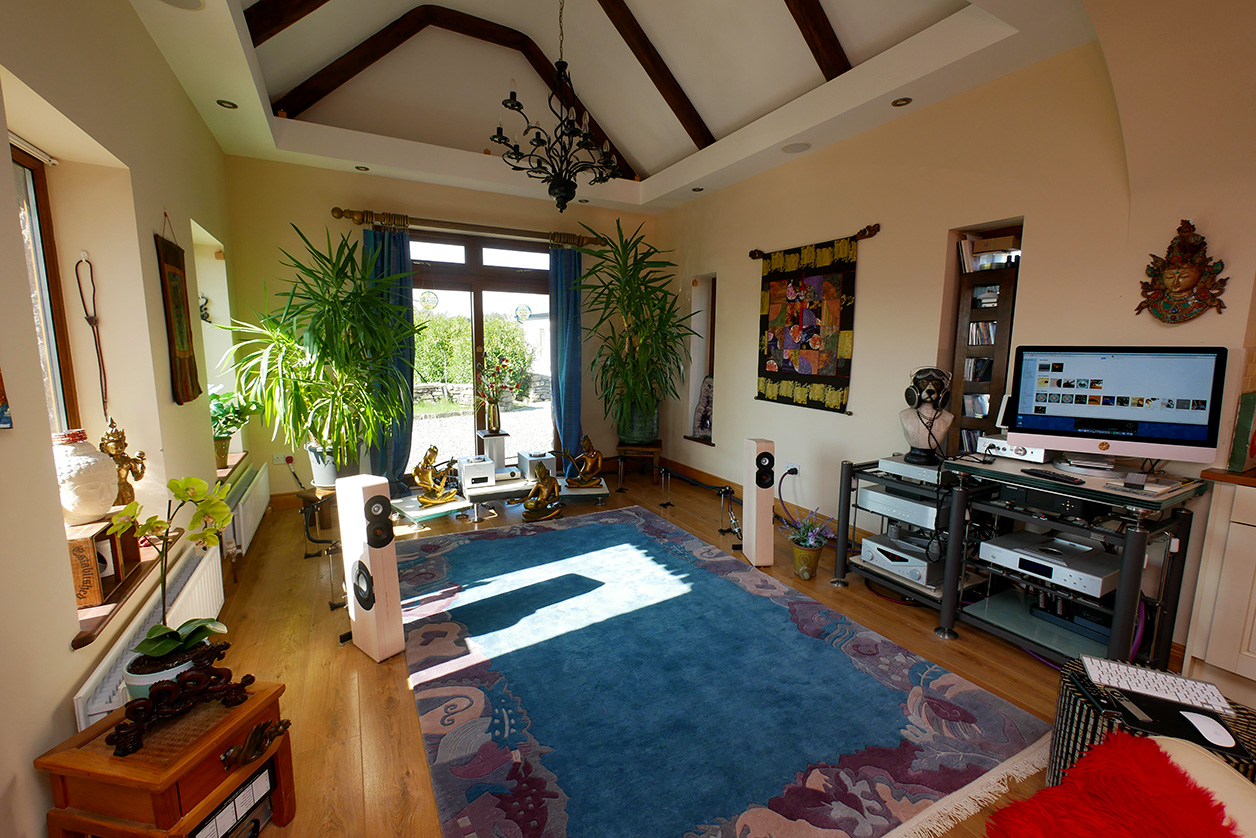 About 3m between front wall and speaker baffles, about 2.4m from the chair, about 1m from the sidewalls, toed in face on with the seat whose back is 4m from the back wall.

The real point of this exercise was to advance an important point. The W8's 3" tweeter is a very special customer of unusual off-axis response. It's so good that versions of it appear in the W11 and W13. Like the inverted Focal was for earlier Wilson designs, this Fountek is a signature ingredient for Boenicke speakers. Ivette's W5 has it too. It's more dynamic than typical 1" domes and doesn't bundle 'n' beam the same. So when the flood lights come on, they really come on. Also, because a lot of subtle spatial cues live in the brilliance and air regions, excellence across that bandwidth nets extra points for soundstage depth and the audibility of recorded space. Now we've identified enablers for this special forté of Boenicke speakers. Very narrow wooden slivers that look more like leaning posts than the front baffles of standard box speakers would seem to live on the same page. 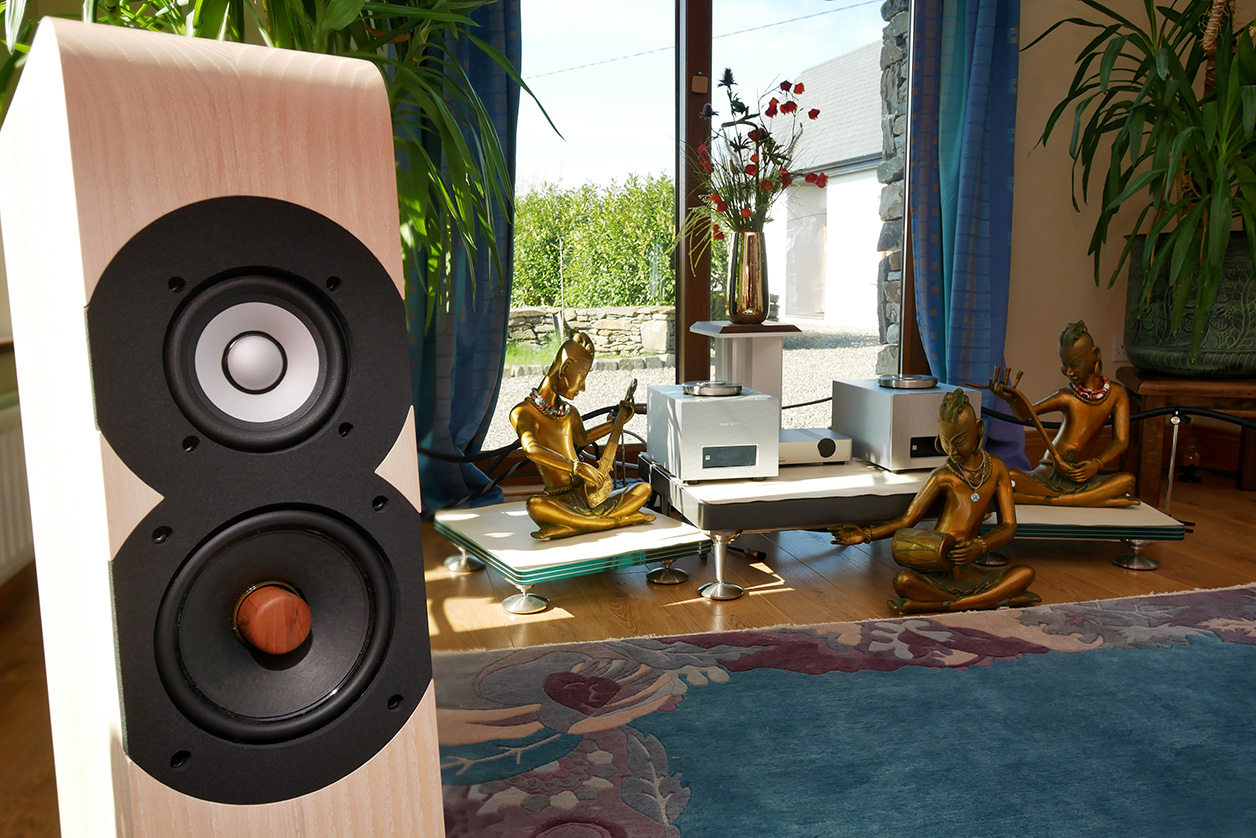 Back on the Fountek as augmented by the rear-aimed Monacor: if you listen to transformer-coupled valve amps of limited HF bandwidth, with clear phase shift and capacitor-induced colorations, you will leave treble resolution under the table. That's a matter of taste so stated only to suggest that whatever limitations you imagine in the W8's top end won't be from it. They'll be from whatever you drive them with; fighting words but true. To map the real limits, I'd propose a direct-coupled amp of exploded bandwidth from Goldmund, Kinki, LinnenberG or Spectral. In the midrange we hear a cellulose membrane whose tonality reflects its material thus differs from a ceramic Accuton for an obvious example.

To my ears that means a small shift away from the leading edge into a tone's bloom portion. Coupled to Sven's deliberate energy reduction, it creates a more forgiving but macrodynamically happy stance which lets singers of big lungs and elastic vocal cords hit peaks without any sense of restraint, breakup or rough edges.