For more sonic impressions, the show moved back downstairs. Of my two options, it made the W8 sound its very best. The next sessions reduced amplifier power by first roughly half, then half again then half again to check the results into this load. The power steps would be the original Kinki Studio EX-B7 (250 watts), then Crayon Audio CFA-1.2 (90 watts), Simon Audio i5 (50 watts) and Bakoon AMP-13R (25 watts). How much would it take to make the W8 sound best? Except for the deliberately warmer tuning of the 'soft power' Simon Lee integrated, all the rest follow my personal flavor preference of quick, lucid and lit up across the bandwidth. 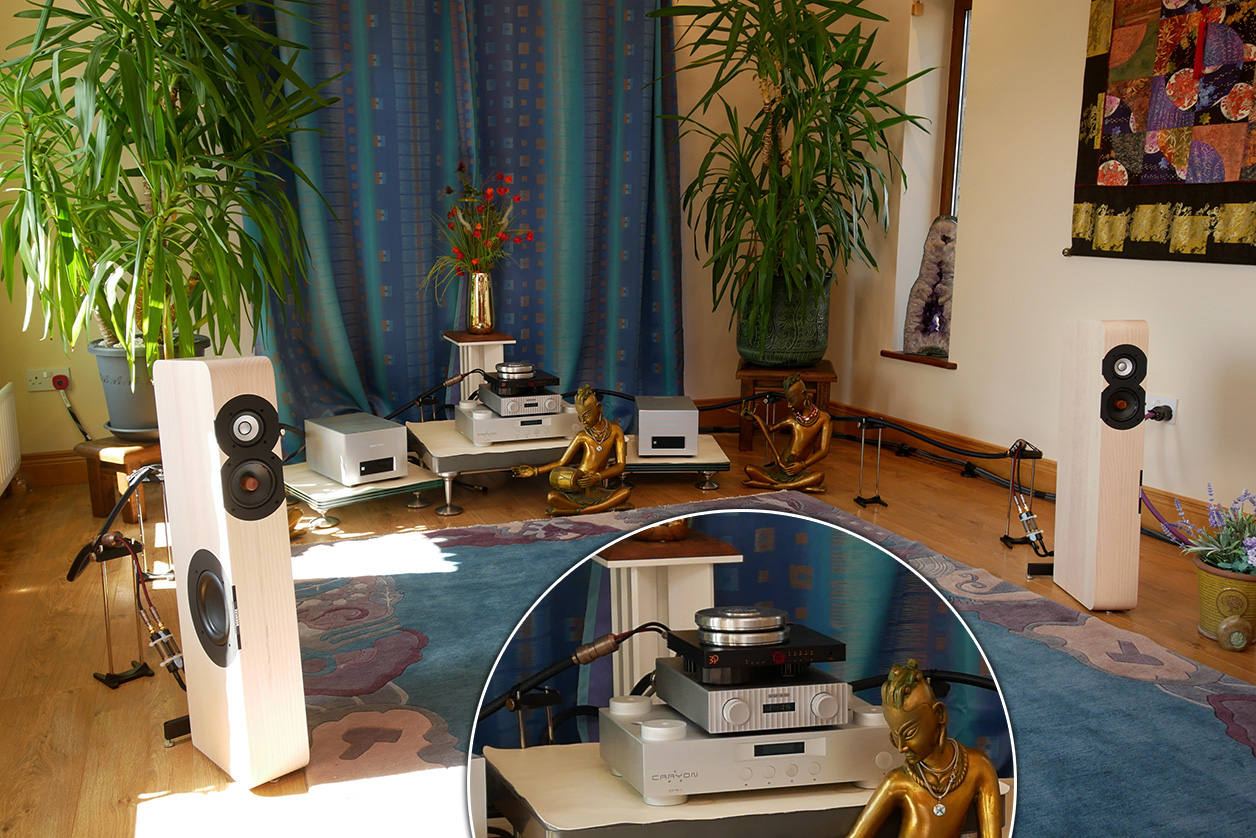 With my pair of LessLoss inline passive noise filters—blue-tacked and tie wrapped for clean routing—I had one of Sven's optional higher-end tweaks which only factor beyond the W8 model. Since our Firewalls go on any speakers in this space, they also went on the Boenickes (our upstairs sound|kaos Vox 3awf monitors build them in). You might say that I'm sold on them. Likewise for getting speaker cables off the ground. It lowers their capacitance. Try it with paper cups. If you hear a nice difference, go proper with AudioQuest Foglifters, get serious with Furutech NCF Boosters. If you can't hear a difference, don't bother. 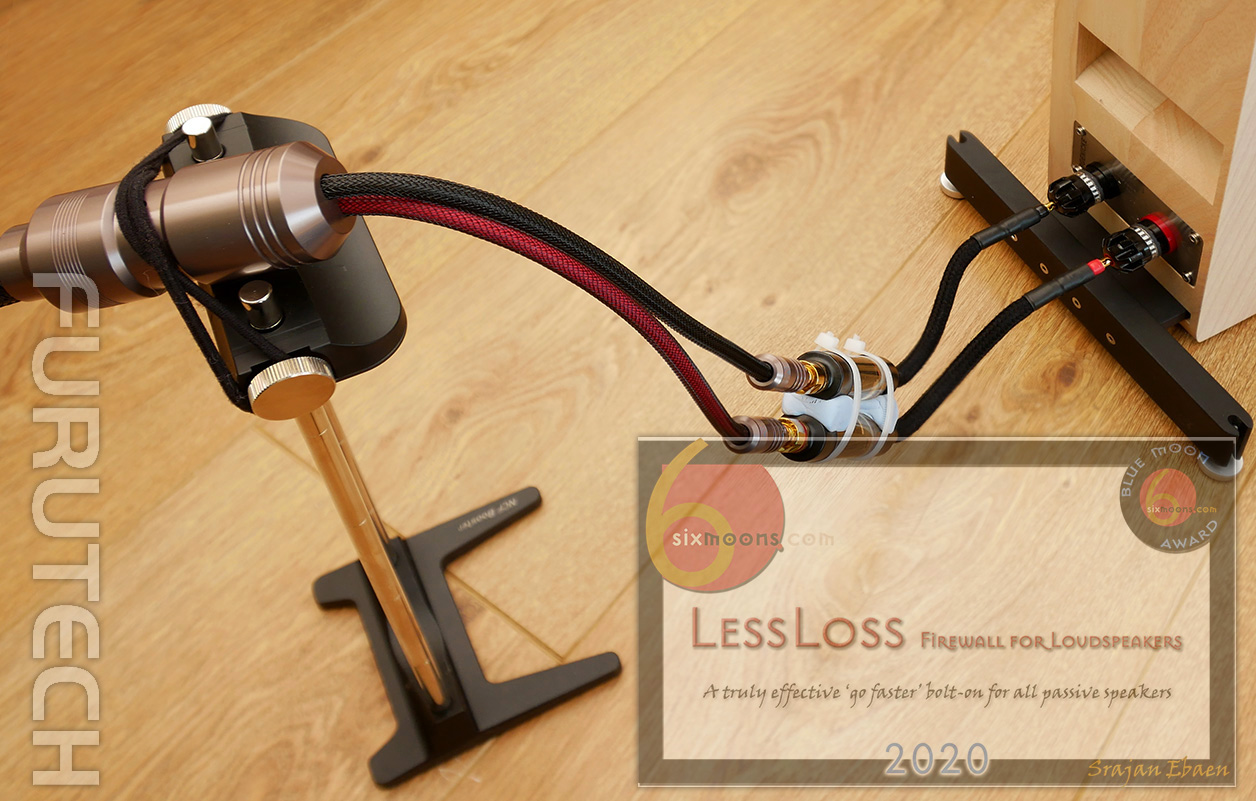 To judge by addition not subtraction, I started these sessions with the lowest power. That was the 25wpc Bakoon. With it I sat between 10-20dB below the Terminator Plus DAC's 2.2Vrms unity gain. An active preamplifier would add between 6-15dB of voltage gain, expanding top SPL to headbanger excess in our space. By my reckoning at least, the hifi military—looking for a few good watts—could be happy with just 25. Switching up power lowered the volume setting for equivalent SPL by just a few decibels just as it should have. But what it also did was hang more sonic weight on my image clothes line. Here the AMP-13R had been the most preternatural lucid and direct but arguably also a bit top heavy, fresh and occasionally forward. To my ears, the pudgier i5 was too fluffy by contrast. That made the 90wpc Crayon from Austria the best medium-power match. It wasn't quite as lit up and immediate as the Bakoon but more relaxed and full in trade so on balance, better balanced.

It's when I topped off once more with the Kinki monos that the Bakoon's electrifying speed resurfaced. Except now it was accompanied by the Crayon's relaxation plus still more LF grunt and dynamics. No replacement for displacement? I'm usually first to rain on the power-monger parade. In fairness, more does seem to be merrier with the W8. It's simply no requirement for desired loudness. Already 25wpc had full lift-off in casa Ebaen. Above and beyond W8 virtues I tabulated already, I'll now add man-tall staging. Anthony Gallo's stumpy Reference 3 was routinely criticized for rug-rat image height. Sven Boenick's stumpers stumped by having me look up just as a seated listener would facing a standing singer. So don't for a second assume that you'll have to hit up the aftermarket for a kludgy speaker lift. The W8 stages tall and proud as is. With amplifiers of appropriate chops, it'll also lay out its soundstage in magnificently sculpted detail and separation that begs for a mental walkabout. Though it does everything very well, quasi demonic soundstaging probably does sit at the very top of the W8's can-do list followed by natural tone.

That returns us to the shallow hypocritical boast of 'only the sound matters'. The real hippocratic oath insists, 'first do no harm'. With a bit of creative license, I'll adapt it to mean 'everything matters'. Now it encapsulates all sonic checkpoints audiophiles love to tick off: bandwidth, scale, staging, tone, dynamics, linearity, resolution, speed. It just doesn't stop there but adds build and parts quality, industrial design and styling, company reputation and support. Then come less tangible aspects like pride of ownership and not being just another paint-by-numbers MDF box with a 4th-order filter in shiny lacquer or veneer. Finally but for some audio philanderers far from least is resale value and associated ease of shipping.

According to this oath of true hipness, the Boenicke W8 really has it all. Whilst it's most certainly not alone in that, it does stand rather less crowded when one considers what it so often takes to hit all of these notes at equivalent brilliance – more cab and driver size, more weight, more cosmetic intrusiveness, quite possibly more (a lot more?) money. Which begs the question. Why bother with more? An award was thus self-effectuating. If that's even a word.

All Boenicke speakers are greedy for, or appreciative of, extra breathing room. Here's another typical setup, this time of W11 with SwingBase. So do get a room with sufficient room to set up freely..