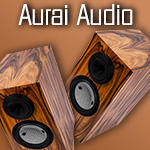 The pink panther. Inspector Jacques Clouseau. Peter Sellers in the title role. The unforgettable Henry Mancini theme. It's all seeped indelibly into global pop culture. Most mélomanes simply won't have heard of audio engineer Alain Pratali or Aurai Audio. I hadn't. According to Simon Lee in Seoul, that would be a shame. So, today's assignment is about to rectify this oversight and overhear.

Simon and Alain are friends. When Simon cleared non-compete bans following a divorce from his former company April Music, he planned a relaunch under new brand Simon Audio. He still had the speakers he'd years ago asked Alain to design for April Music. To go global, those now would become Aurai Audio, so named for ancient nymphs of the wind. Simon would be their Korean importer. The first models Simon brought to Korea are the M Three at right with his 5-Series separates of top-loading CDP and DAC and 45wpc i5 integrated; and the matching 8" 2-way M1 tower above. Alain was readying the M Zero Junior for release later this year. The flagship M Zero was on the final road map and is already shown as a render below.

"I've been a music guy since 1965 when my father played the guitar and my older sister sang "Voi Che Sa Pete" every day. A few days ago I passed my 65-year mark. Alain's speakers are the only ones I listen to these days. I tried so many over my more than 40 years as an avid audiophile. I've come to the conclusion that these are really the speakers for all of our homes."

That was Simon explaining why he would only import Alain's loudspeakers to offer his clients turnkey whole-system solutions.

Alain's friend Antoine Rouault builds the Aurai Audio speakers in his workshop near Rennes in Brittany.

In the Pink Panther, the name of the eventual 7-deep movie series derived from a huge, very rare and very elusive pink diamond of enormous value. Would I agree with Simon that this speaker exhibits equivalent rare sonic value? To find out, I emailed Alain. I started by saying that I thought we hadn't met yet. After 20 years on the trade show beat, I simply was hazy. "No, we really don't know each other. In fact very few people do even though I was in audio for 35 years. 25 years ago, I developed the Oracle Audio 1000 and 2000 CD players and amplifiers for Jacques Riendeau. My very first design was the Crystal DAC with a Philips CDM 12 transport, I²S system and nine power supplies for which I had developed a signal path without feedback, capacitors or DC offset servo, just a clean differential approach [see below – Ed.]. Back then I also made products for Simon like an RIAA phono stage. Today I'm officially retired. But I love tech and audio so still work on projects that interest me. 5 years ago Simon wanted to offer a range of speakers. So I developed everything he asked for, including working with the most desirable drivers from Accuton, Audio Technology and Supravox. I didn't give up when he subsequently ran into problems with April Music.

"So here we are again in 2020 now under our own name. I propose to not only ship you the speakers but also our cables to get the sound we aimed for. I've experimented with all possible filter permutations and slopes and picked what touched and moved me the most. I focus on the impulse response and in-phase transients to get a very natural open sound."

So… what's in our French diamond if not the pink panther?