Here's that setup as seen from the open kitchen which flows into the sitting lounge on the other side of the fireplace divider. 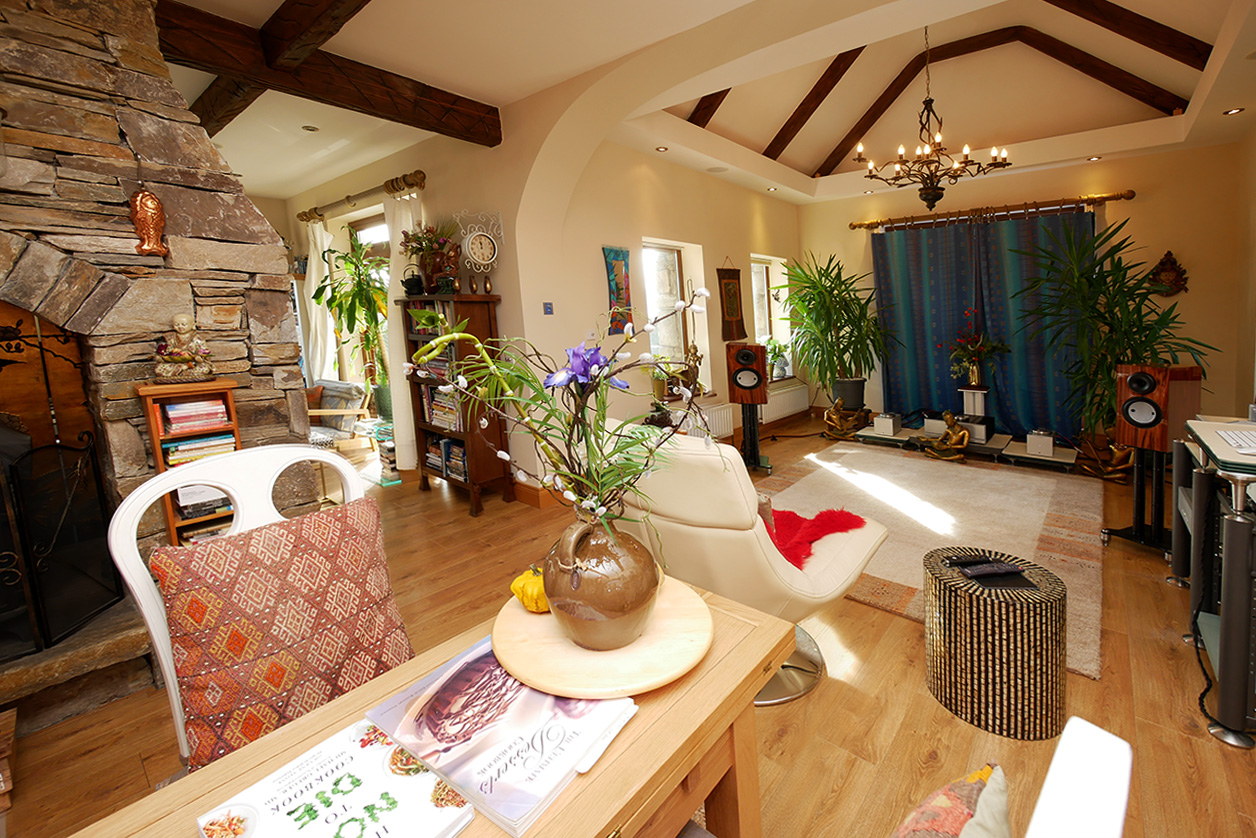 I was in a pasha mood. Only stately Ottoman music would achieve my desired translocation to a different time and space. I cued up Eda Karaytug's "Aska Sevdalanma" for the added benefit of being well recorded. This makes for very exposed vocals which are accompanied by most crystallized picked qanun quivers. The M3 displaced the outgoing €22'900/pr Cube Audio Nenuphar Mini BASiS. Those were 8" no-filter widebanders with twin whizzers atop sidefiring sealed 10" woofers equalized for +3dB at 30Hz with their onboard 200-watt class A/B amps. Very much contrary to cosmetics and concept, with the M3 I had very close sonic recall. Gushing immediacy, wall-to-wall suspended sound without any apparent origins, suddenness, coherence and textural continuity all overlapped. The French then had the superior treble, the Poles superior LF weight and reach. Big active woofers will do that. At exactly 1/5th the price, my inner proselytizer was prepped to play Jehova's witness and ring door bells. "Do you believe in sonic salvation?" Thankfully rural Western Ireland is a realm of hifi heathens. I was so saved from myself.

For equally untethered male vocals, I switched to the title track of Sagar Aghili's Negar album where the lead singer of Iran's State Symphony explores a deceptively simple song with unexpected vocal flourishes and fragility.

Like Eda, the subjective realism of a raw vocalist projecting a virtual emo force field was very tacit. Singed by fire was the subtext.

For more from Sagar's home country but now with a symphonic backdrop and more heroic delivery, Homayoun Shajarian's soaring tenor performed the title track from Afsaneye Cheshmhayat at stout SPL. Whenever power vocals rise full throttle, a hifi's smallest misstep registers like that edge-of-disaster effort a slalom skier exercises around steep turns and rattling mogul fields. With the M3, nothing unglued or frayed at the edges. This was fully relaxed speed slalom without anticipatory clenching.

For a perfect track to show off their widebander-style speed, I reached for "Segue" from the first Curandero album Aras. On it Miguel Espinoza and Bela Fleck duel on flamenco guitar and banjo while Ty Burhoe's tablas and Kai Eckhardt's slap bass interfere with greased impunity. Consisting nearly entirely of percussive staccato sounds to weigh heavy on the time domain, this became a signature tune for the M3 fronted by our LinnenberG amps. By contrast, nearly all more-way speakers sound confused. They lack this extreme impulse clarity to stay unfazed. They suffer blurrier bass which messes up the exceptionally fine needle work of this virtuoso quartet. Their rise times are too slow.

Here the only thing that proved beyond the M3's grasp was the full weight and explosive shove of Kai's popping bass. For that one would need more cone surface like perhaps the floorstanding M1? You wouldn't really know that though unless you had the Polish subwoofers on audition just before. "If we have to compare M3 and M1, let's start with commonalities. They share the same tweeter because HF quality is crucial to the realization of any speaker. The quality of the Accuton mid/woofers is the same. There's no difference in tone or sound color level. The quality of the filters is the same, too. The only physical difference is cubic volume and driver size. An 8" versus 6½" driver is a different story with more gravitas. That said, my aim is to always offer the same basic quality in all my designs. I don't work with any marketing considerations. I don't manipulate positioning. I don't dumb down a smaller model to give the next one up a bigger lead. So the M1 is simply a M3 which has matured from a girl in bloom into a real woman."

About any differences in midrange density and clarity in the presence region between the two German drivers, "I worked a lot with Accuton on this exact topic. My 8" driver has 2dB stronger magnetic force in its gap than their classic version because it lacks the shock absorbers which cancel the resonances of the smaller driver. The 8-incher has no damper but larger cone surface and mass, therefore higher internal damping. Over my career, I've done a lot of physics, math and materials behavior to understand composites and how to work with their strengths and weaknesses. The M1 and M3 are my vision on harmonious apartment living with feminine appeal. They're a blend of elegance, quality and simplicity." How 2-way simplicity and quality drivers serve the more complicated was demonstrated also by this Kalya Scintilla remix. It layers synth-generated and enhanced sounds and spattering marbles in wide panorama. The M3 tracked and sorted it all without fail and as cleanly as the Curandero number. Techno sounds don't pass through straight or folded sound tubes like a saxophone or trumpet. They mustn't energize a sound board or tonewood body like a piano or guitar. They're electronic thus instantaneous creations. Their original sharpness really benefits from time-domain accuracy in loudspeakers.